Toronto developers have their eyes on the skies, the city's vertical expansion often coming at the cost of buildings that would have seemed too large or culturally important to demolish just a generation earlier.

But times are changing, and anything not considered tall by today's standards always has the potential to be deemed an inefficient use of land.

Almost exactly four years since a developer proposed to add a residential tower atop a Toronto office building, the proposal for 415 Yonge Street is back and looking much different. 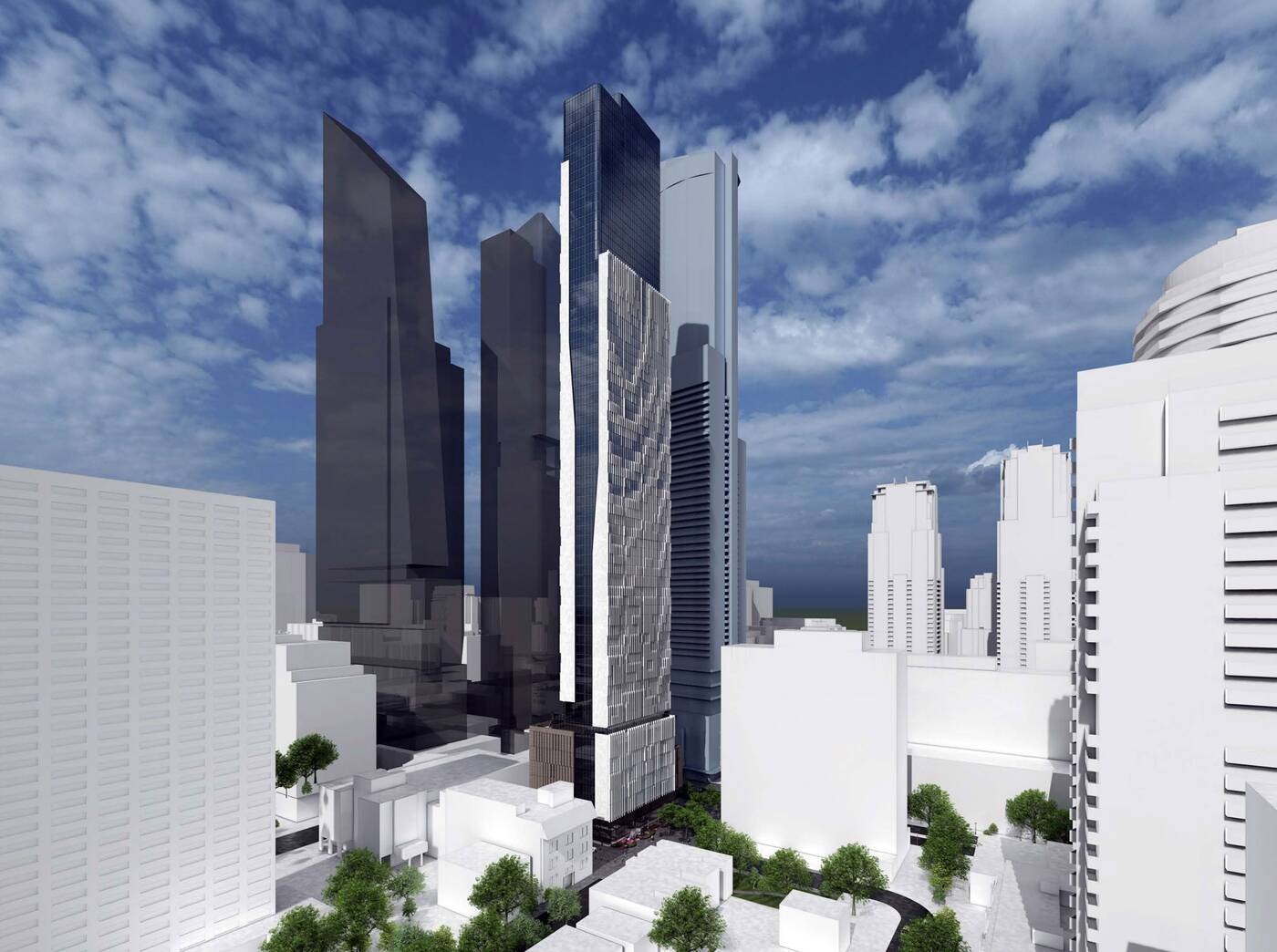 Looking northwest towards the revised proposal for 415 Yonge. Rendering by Kirkor Architects.

Initially proposed by Marwest Group of Companies, the site was among properties sold to undisclosed buyers in 2019. 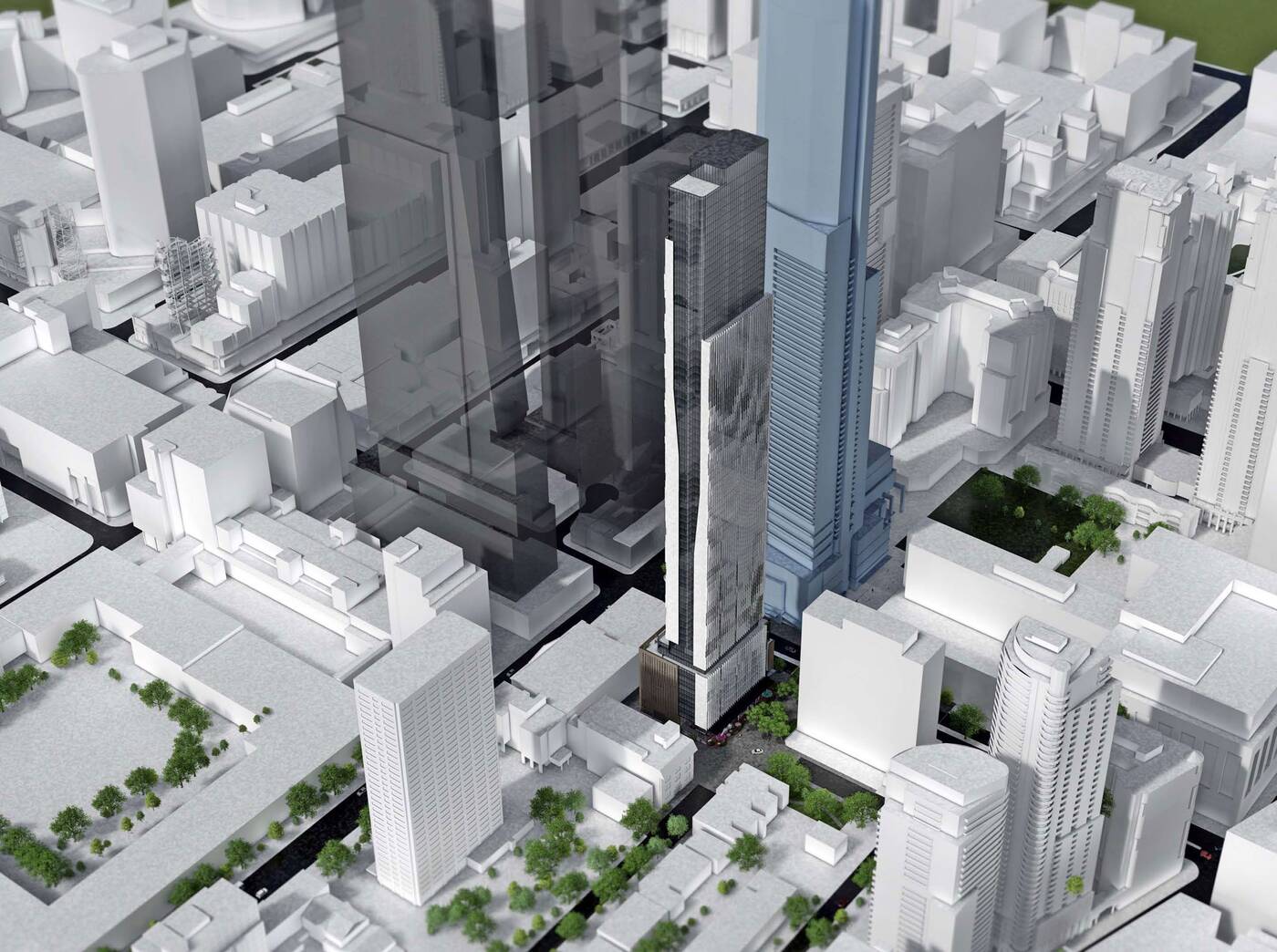 Aerial view of the future 415 Yonge. Rendering by Kirkor Architects.

As with the previous proposal, the design comes from Kirkor Architects, though it's quite the departure from the squared-off hourglass shape pitched for the site years earlier. 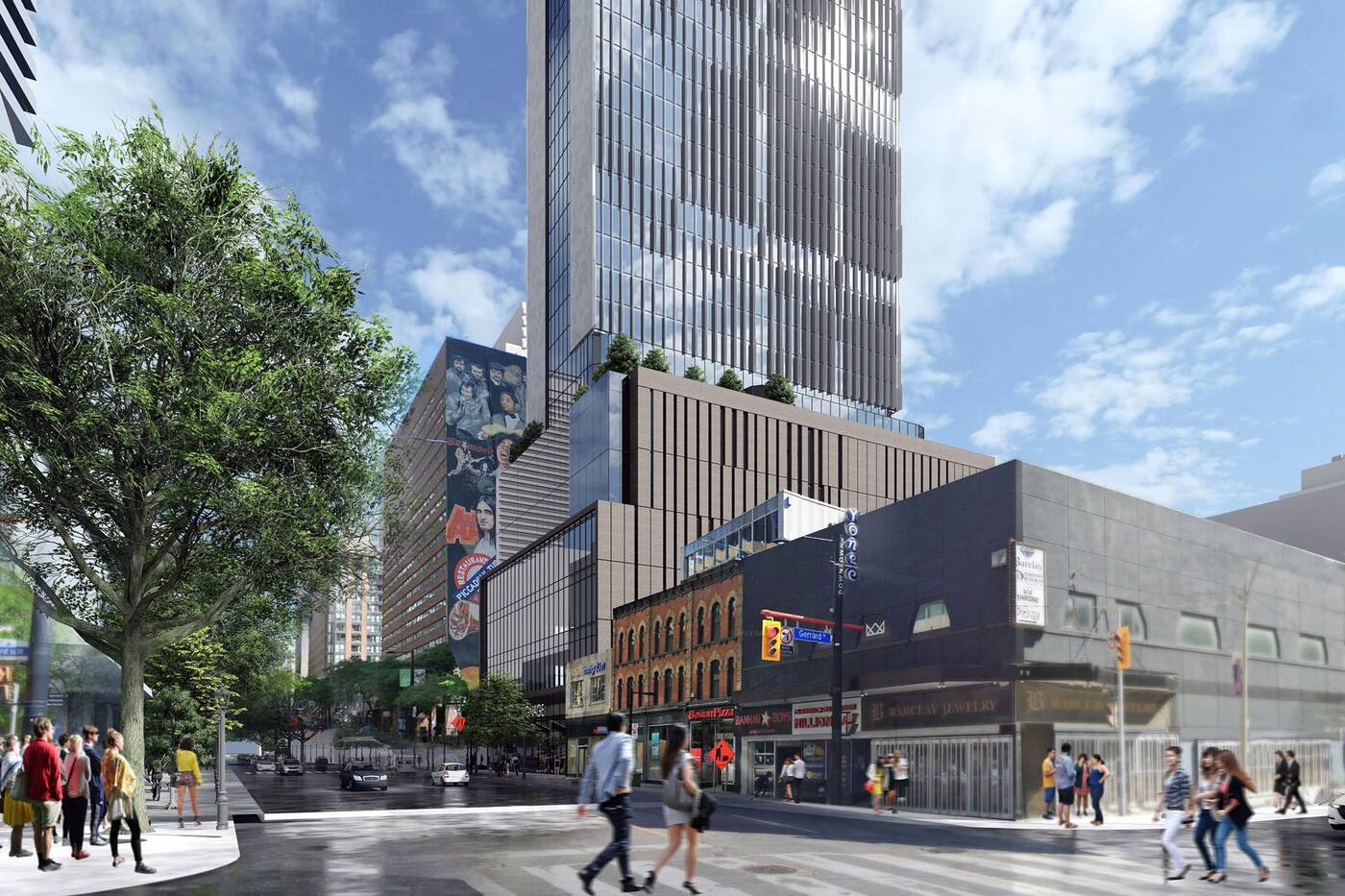 Looking northeast to 415 Yonge from the corner of Yonge and Gerrard. Rendering by Kirkor Architects.

The initial plan sought to retain the existing 19-storey office building with new levels above, however, a heavily revised plan has been revealed that would do away with the building entirely. 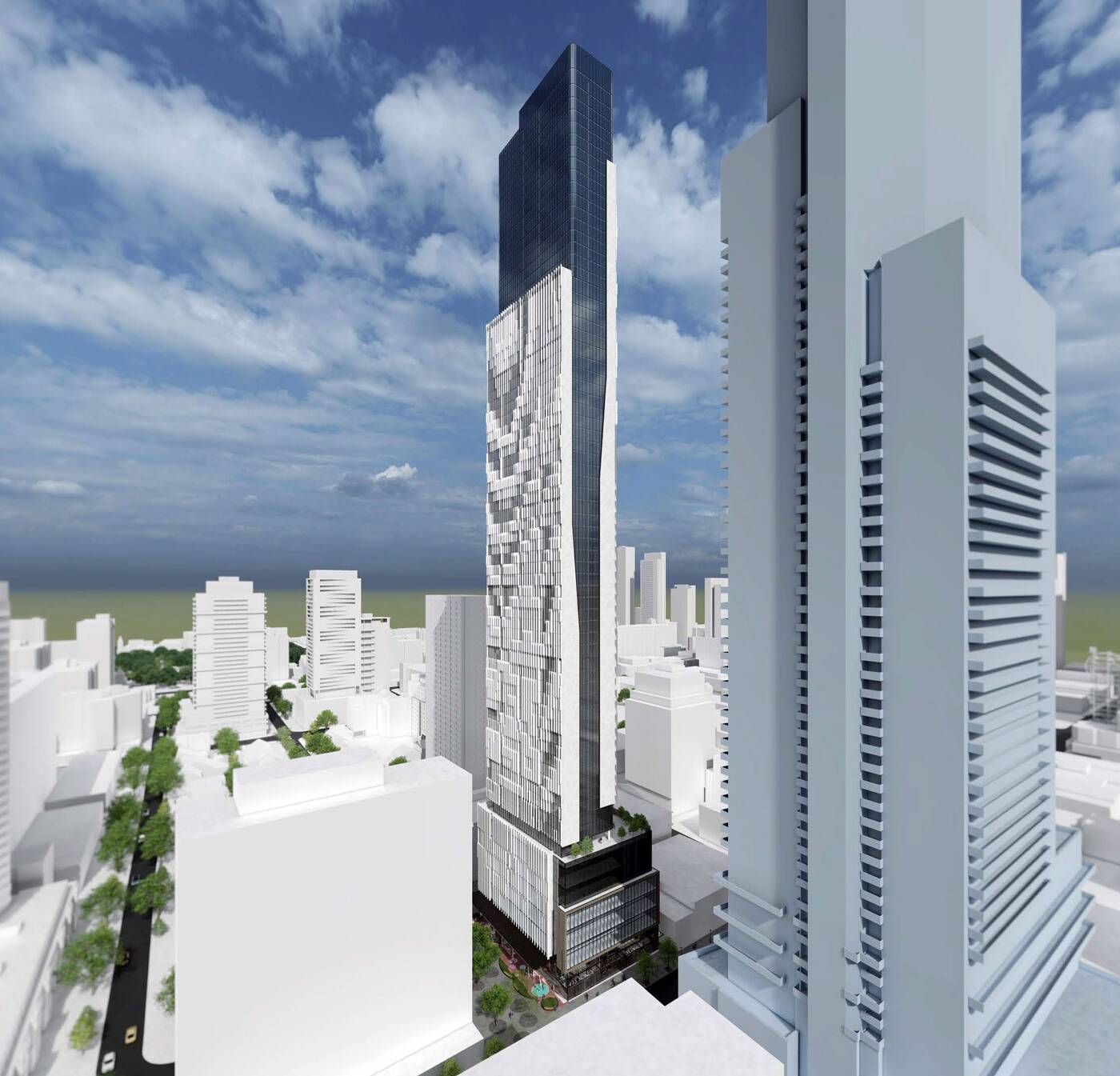 Looking southeast to the site. Rendering by Kirkor Architects.

The project faced resistance from the outset, refused by the city before the developer appealed to the province, where it was eventually approved in principle back in May 2021.

And based on these approval terms, planners are packing in even more residential space than initially envisioned.

After initially seeking approval for a 61-storey tower incorporating the office building below back in December 2017, the latest December 2021 application is now asking for 69 storeys, though the updated proposal is actually about ten metres shorter than what was proposed four years earlier. 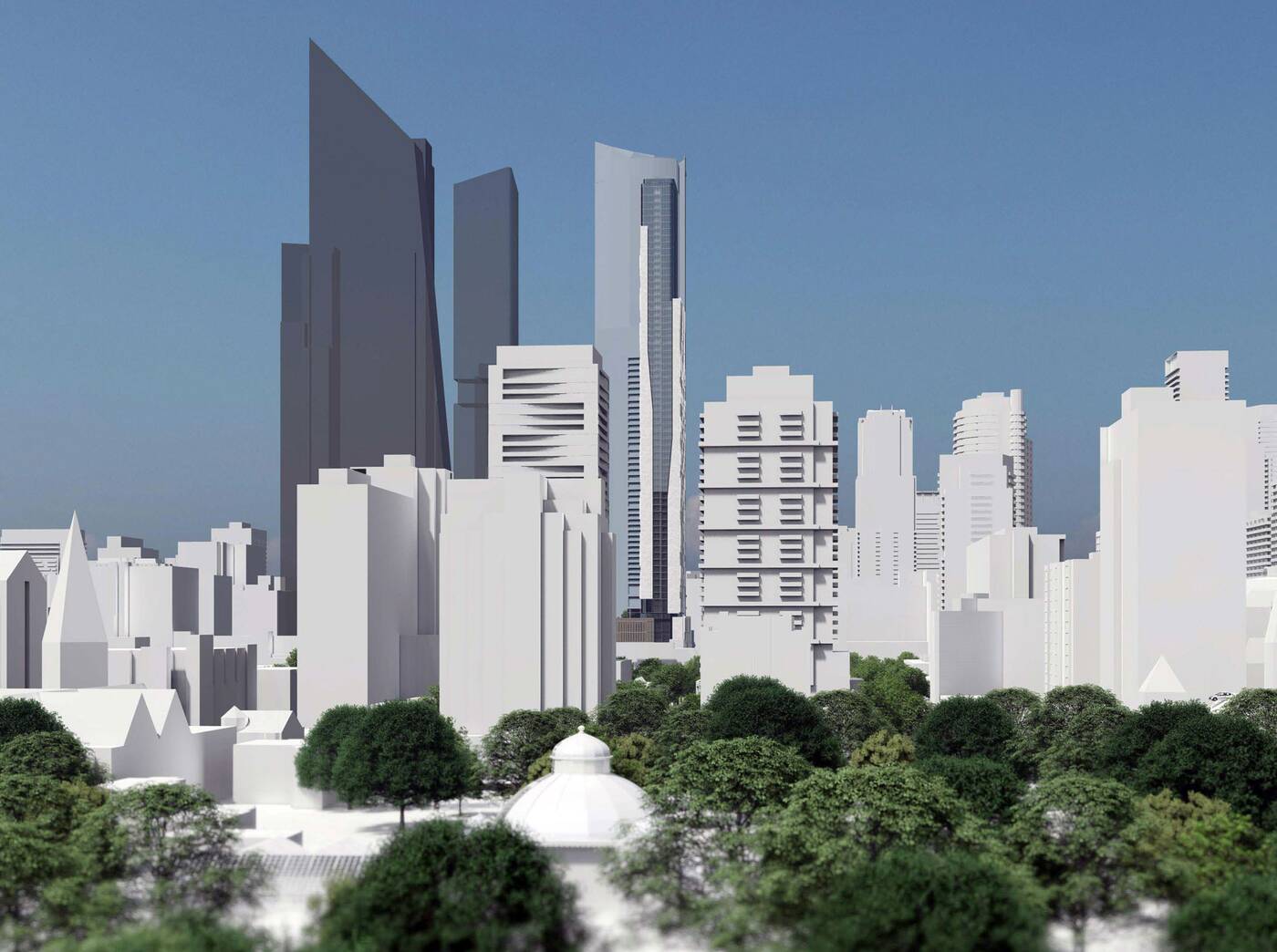 Storeys are an arbitrary measurement, and in the case of office buildings, ceilings are often much higher. The old plan retained 19 floors of existing office space, while the revised scheme only includes six levels of new office space in a much shorter podium.

The 61 levels above — housing residential and amenity space — have much shorter ceiling heights, allowing the developers to fit in more storeys with less height. 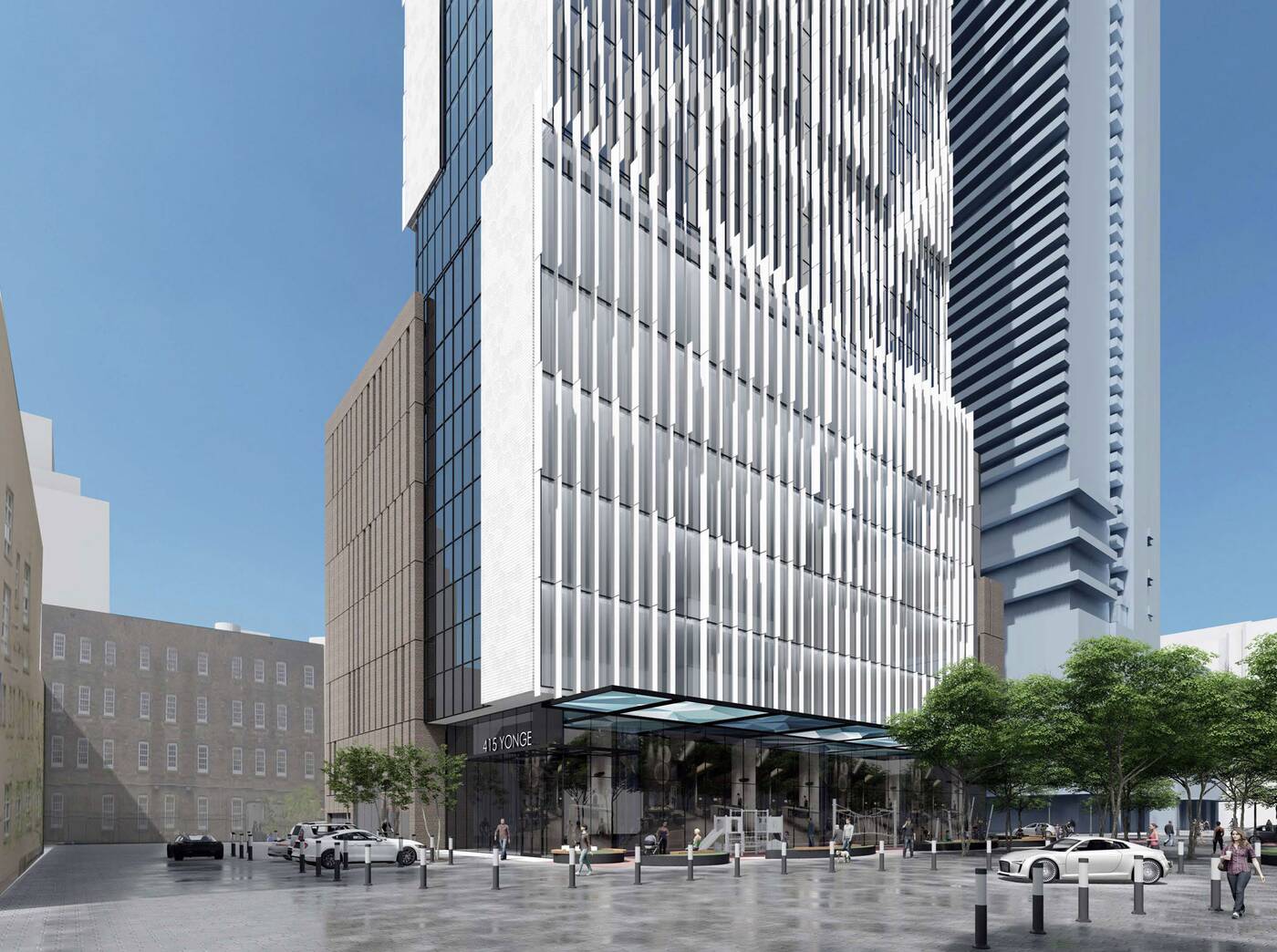 Looking northwest towards base of 415 Yonge from McGill Street. Rendering by Kirkor Architects.

Extra storeys mean more space for units, and the current plan adds 21 new homes to the previous plan's count of 450, for a total of 471 units. Of the total, 52 per cent will be multi-bedroom units, a vast improvement over the initial plan's 32.5 per cent.