Even with all its sprawling suburbs and protected low-density neighbourhoods, Toronto is very much a vertical city, and it's only getting taller around here.

The Council on Tall Buildings and Urban Habitat ranks Toronto as third in the number of buildings above 150 metres and 200 metres in North America, trailing only New York and Chicago. And with a skyline littered with more cranes than the rest of the continent combined, our skyline is set to keep changing for years to come.

Among the extensive list of projects both already under construction and approved, ten currently in the works will be as tall or taller than Toronto and Canada's existing tallest building, First Canadian Place at King and Bay (because the CN Tower is not a building).

Here's a rundown listing some of the skyline-altering projects that could soon redefine Toronto's iconic postcard views.

Perhaps the best-known in the new generation of tall towers coming to Toronto is the much-discussed feat of structural engineering unfolding at the southwest corner of Yonge and Bloor.

Home to a yet-to-be-confirmed but plainly obvious flagship Apple Store location, this Foster + Partners-designed titan is being constructed with a complex hybrid exoskeleton structure unlike anything ever built in Canada.

It is already rising and approved to rise 85 storeys to an insane height of just over 308 metres, but developer Mizrahi wants even more, applying for an extra nine storeys that would push the crown to a dizzying 338 metres. 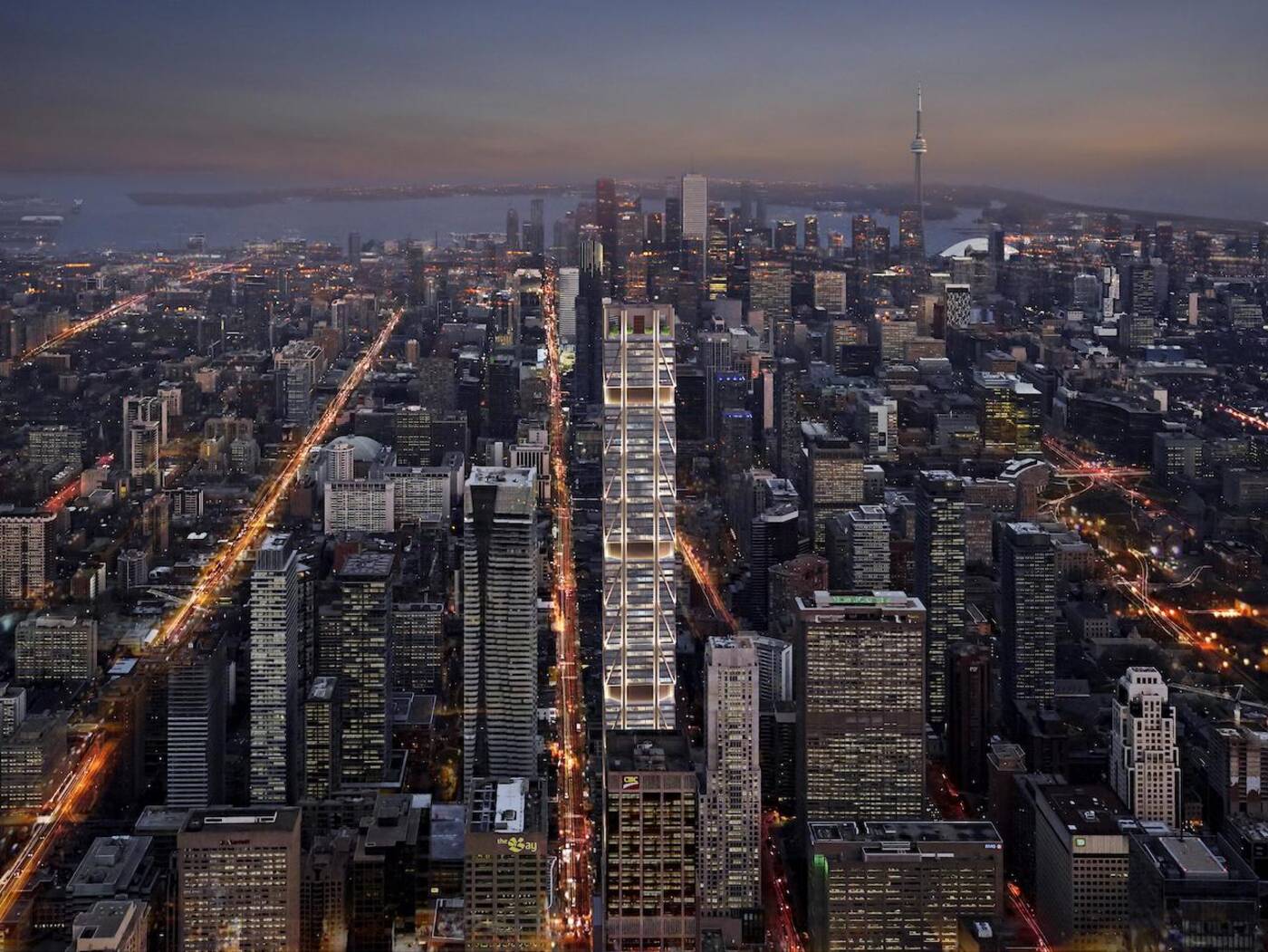 The One in its approved 85-storey configuration, though the tower could get much taller if a height increase is approved. Rendering by Foster+Partners.

It looks like one of the pencil towers you'd see looming over Manhattan's Central Park, but Swiss architects Herzog & de Meuron have designed an ultra-skinny tower at Bay and Bloor for developers ProWinko and Kroonenberg Group.

At 87 storeys, it would contain a mix of office space and over 300 luxury condo units. 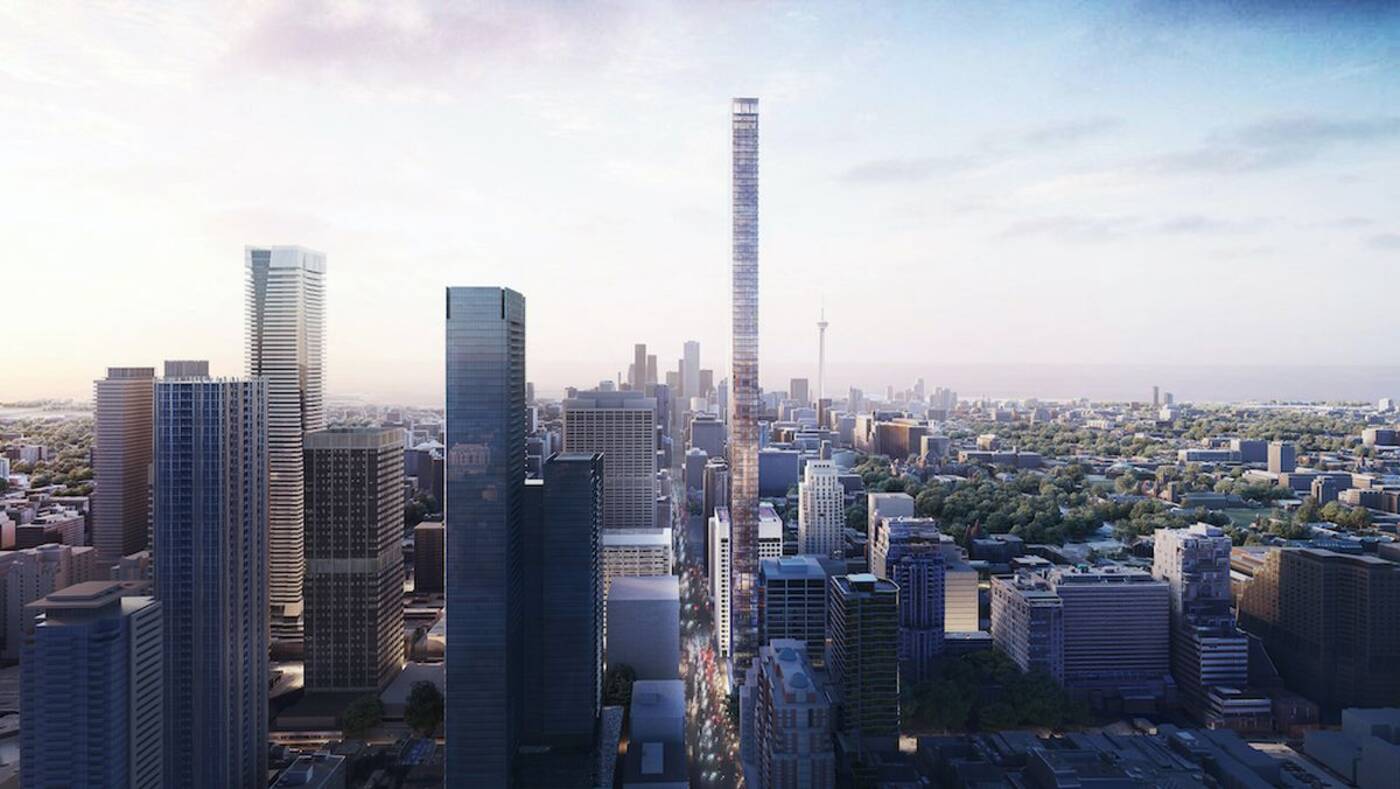 The towering 1200 Bay and its super-skinny profile would be unlike anything in Canada. Rendering by Herzog & de Meuron.

SkyTower at Pinnacle One Yonge, 313 metres

Renderings depict this Hariri Pontarini-designed megalith piercing through the cloud layer, and at a staggering height of 95 storeys, SkyTower is already on the way there, now beginning to rise out of a massive pit at the foot of Yonge Street.

If the aforementioned height increase for The One is not approved, then SkyTower will (at least for a little while) hold the crown of Canada's tallest building. 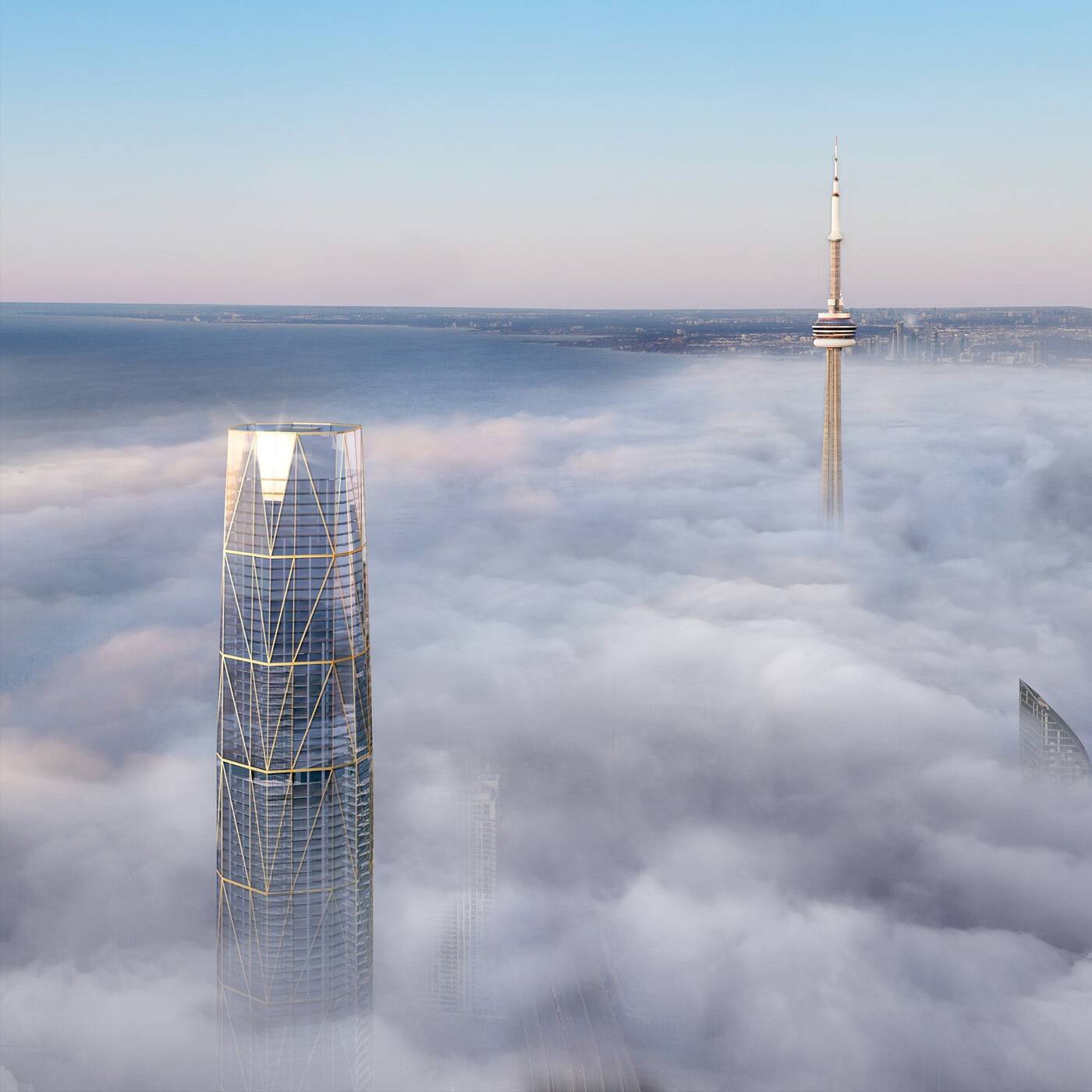 SkyTower at Pinnacle One Yonge piercing through a cloud layer. Rendering by Hariri Pontarini Architects.

Some of the tallest points on the skyline will be situated west of the Financial District, like an 80-storey office and residential tower being planned at King and Simcoe by Dream Office REIT and Humbold Properties.

New York's SHoP Architects have designed a minimalist yet very tall building for a site that includes the existing Elephant and Castle pub. 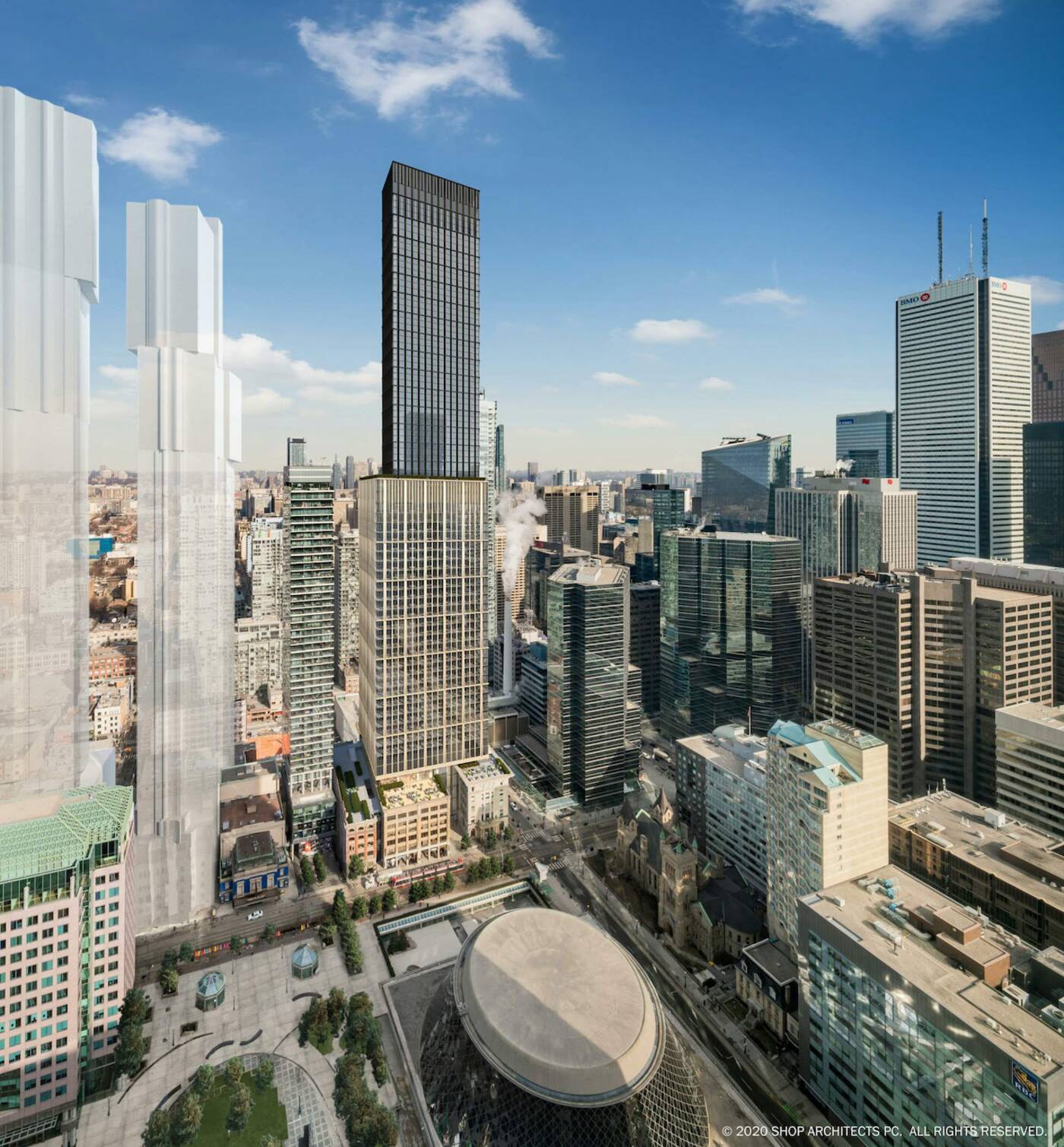 What was once the three-tower Mirvish+Gehry project has changed quite a bit in the nine years since first revealed. Whittled down to two towers and now being developed by the team of Great Gulf, Dream Unlimited, and Westdale Properties, the project has seemed just out of reach for years now, and has still not yet even entered sales. 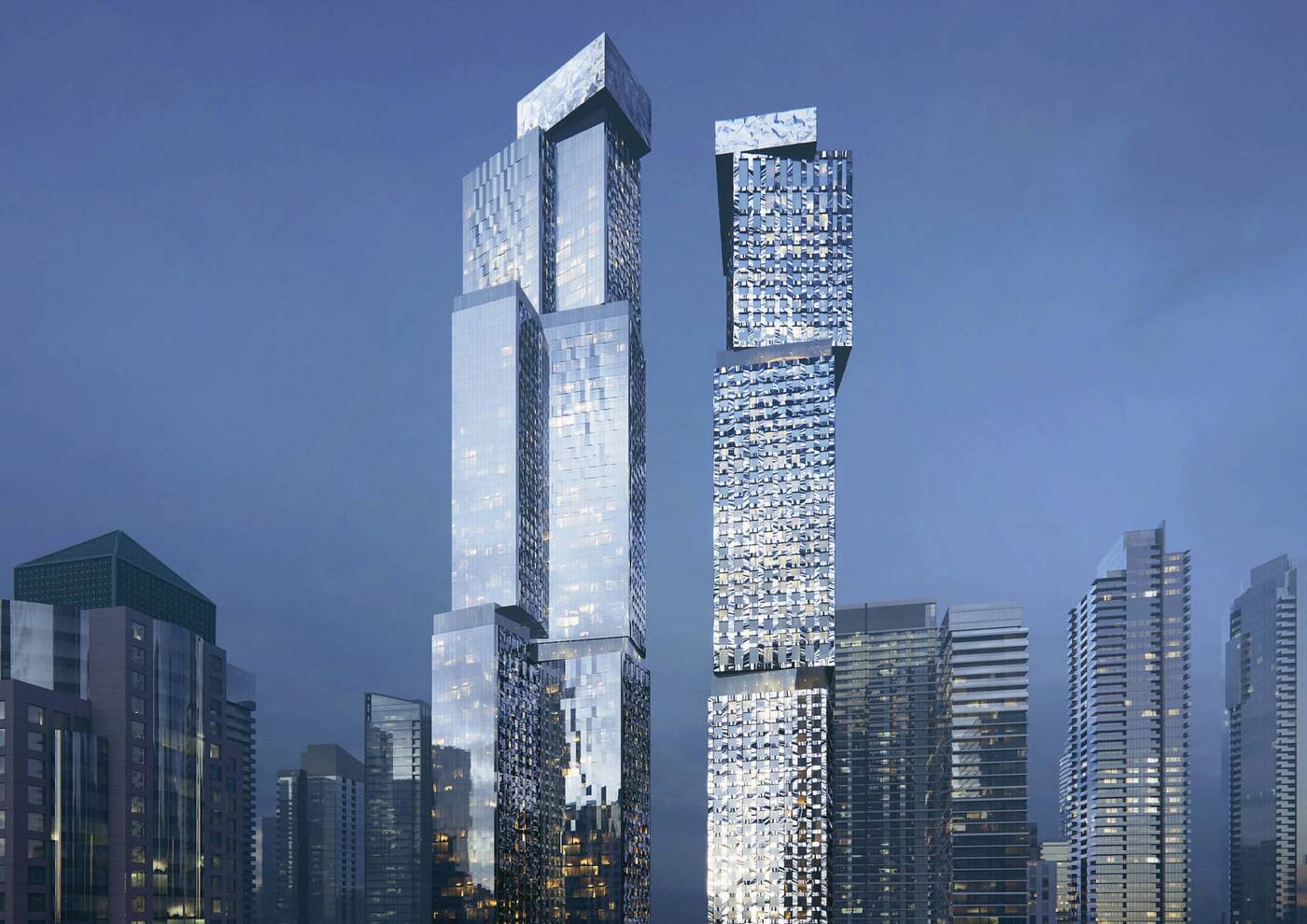 The Gehry Towers look quite a bit different than when first proposed, but would still stand out as some of the city's best and tallest designs. Rendering by Gehry Partners.

Designed by Pelli Clarke Pelli Architects (who really need to figure out a better acronym), the signature office towers would feature swopping curves that would add an exciting touch to the skyline. 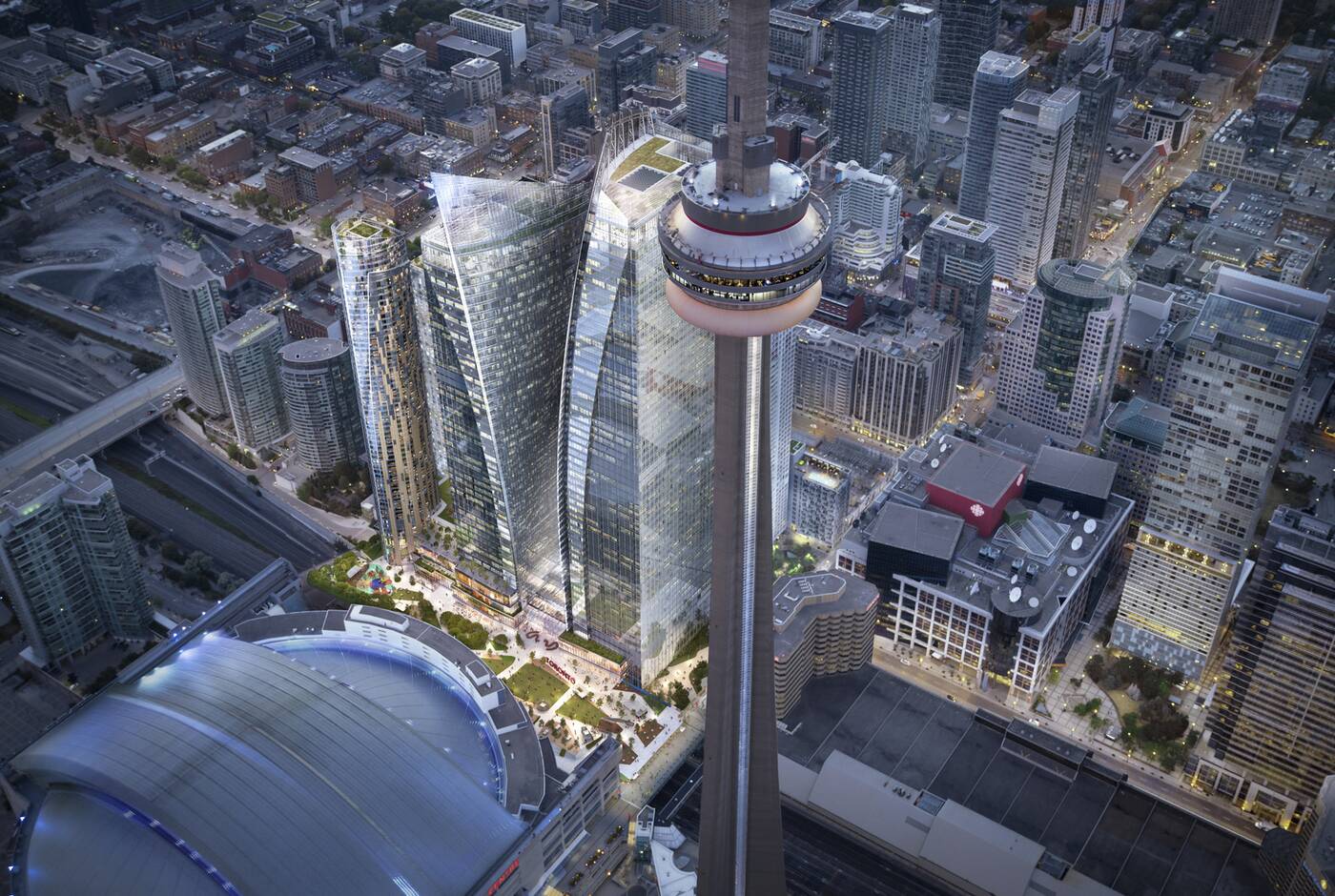 Union Park would bridge over the rail tracks just north of the Rogers Centre. Rendering by Pelli Clarke Pelli Architects.

Toronto's Financial District may be getting dwarfed by new height pockets elsewhere in the core, but there are still big things in the works in the economic heart of the city. QuadReal Property Group is looking to expand the Commerce Court complex with a third tower designed by Hariri Pontarini Architects and DIALOG.

Though the floor count of 64 storeys may seem light compared to others on this list, the tower's 302-metre height is still tallet than any building that exists in the city today. And it will have an observation deck too. 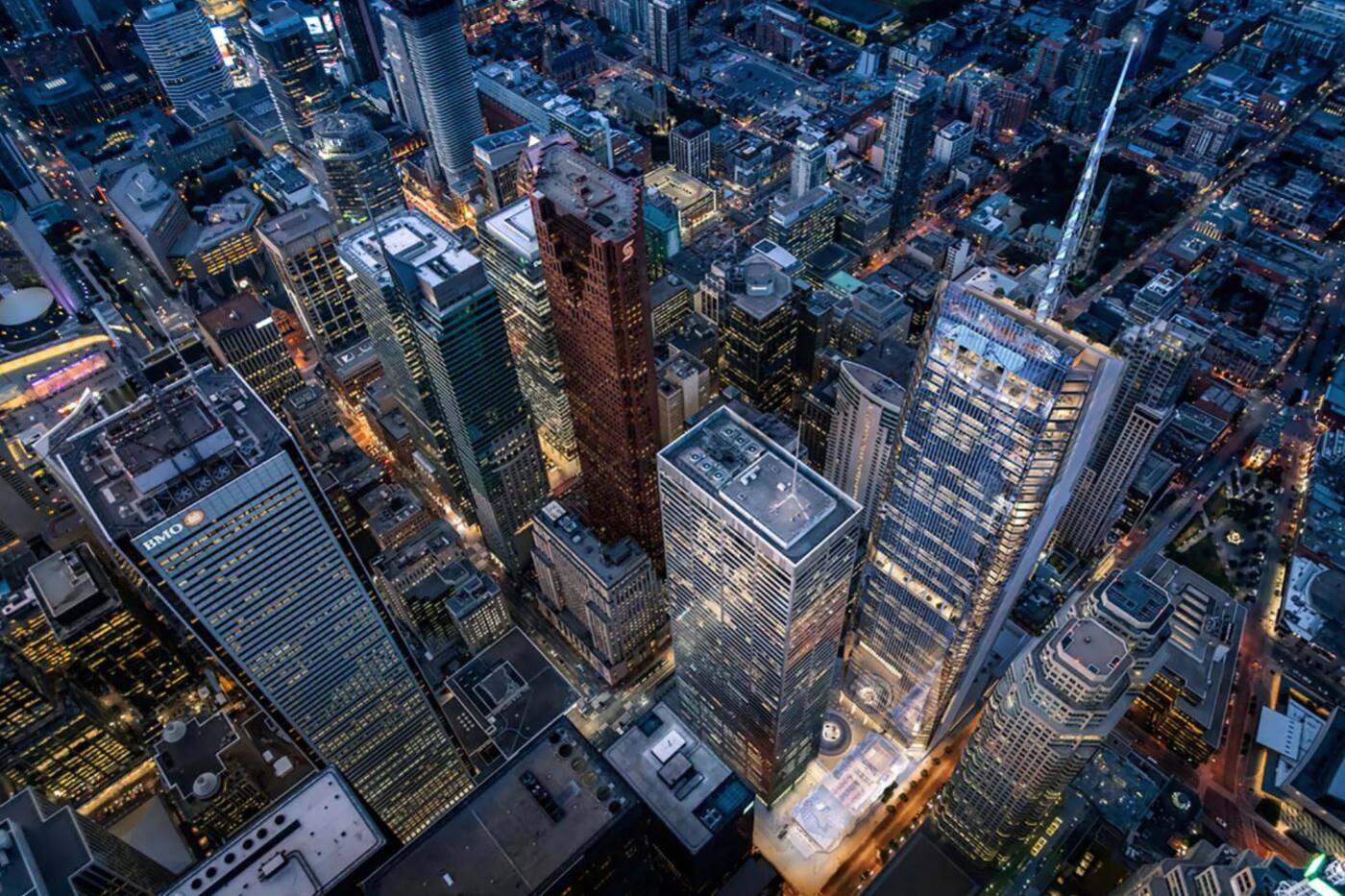 Menkes Developments' Sugar Wharf complex on Queens Quay is already home to a new office tower and a pair of rising condo towers, but the tallest buildings in the complex are still yet to come. Three more towers will rise to heights of 90, 87, and 79 storeys with designs from architects—Alliance. 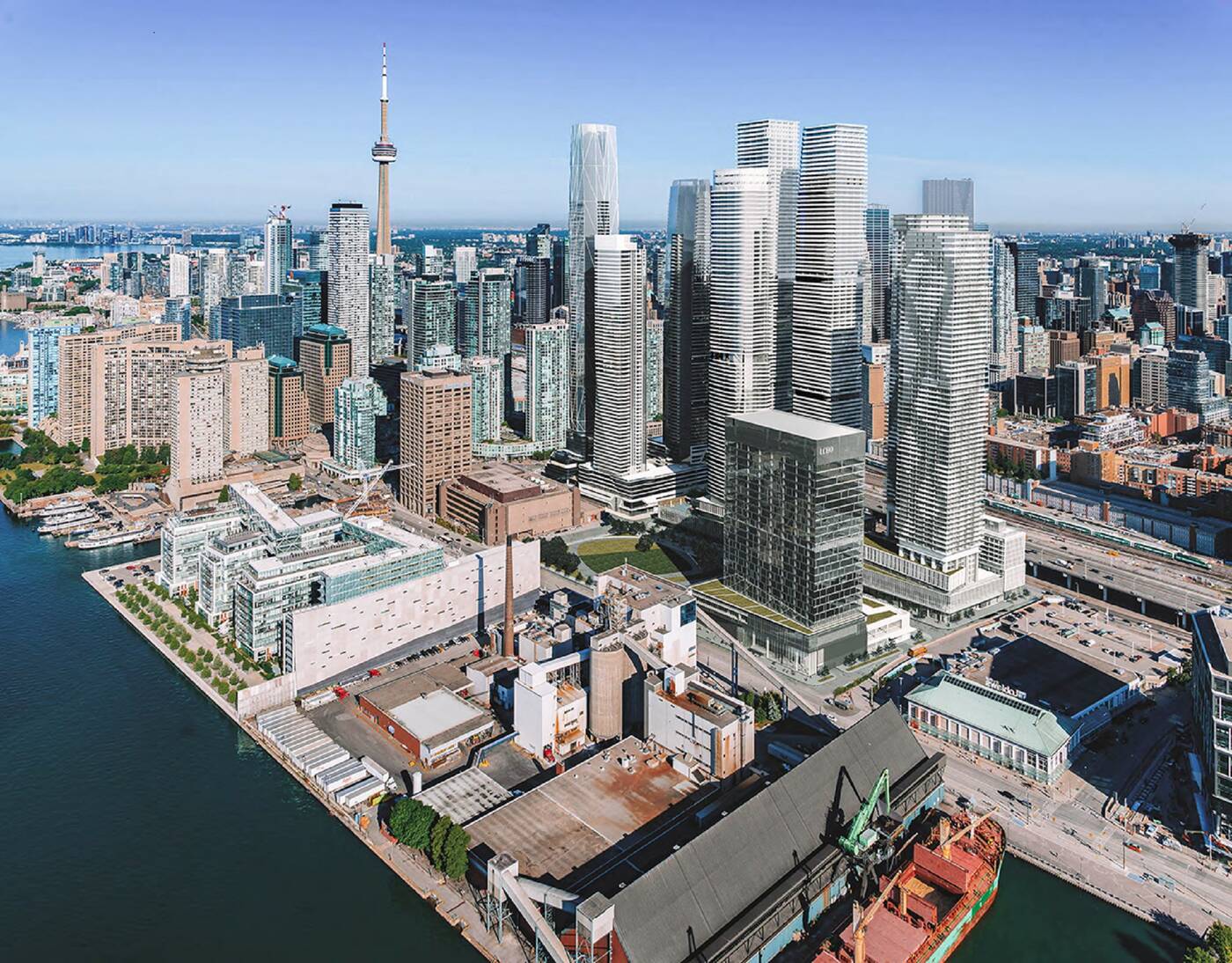 Future phases of the Sugar Wharf community. Rendering by architects—Alliance.

While developer Concord Adex would have us believe that their Yonge Street megaproject will rise 95 storeys, marketing isn't always based on reality. The architects—Alliance-designed condo tower will actually have 84 storeys and lots of skipped floors, but don't tell that to the folks paying a premium for that 90+ floor distinction. 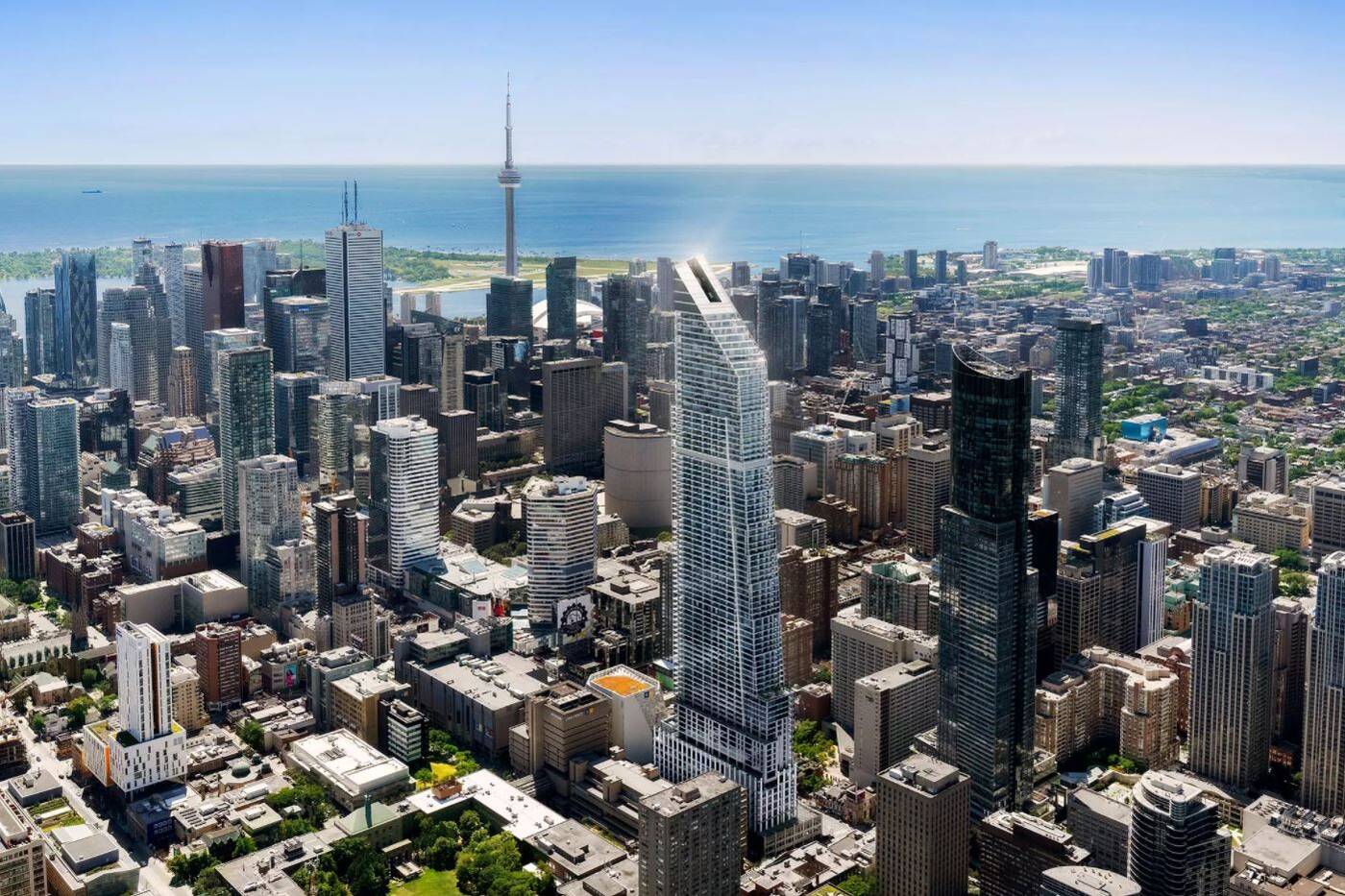 The 54-storey Union Centre office tower proposal is still just about as tall as the city's existing tallest, despite being all the way down at tenth on the list of tallest developments in the pipeline. 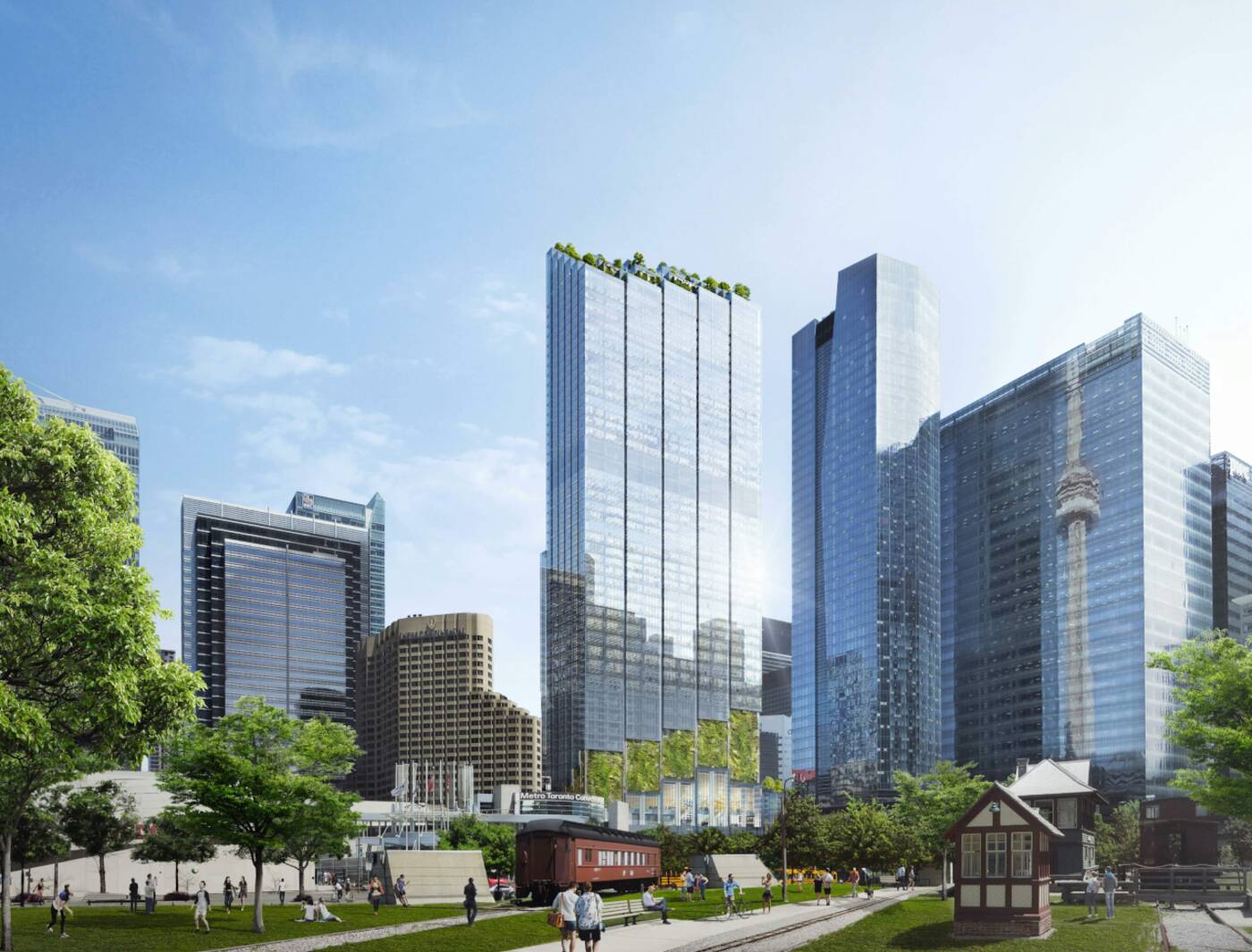 Union Centre's distinct terraced roofline would stand out in this northeast-facing view from Roundhouse Park. Rendering by BIG.

Developers Westbank Corp and Allied Properties REIT intend to bring a tower with a uniquely terraced peak to the west edge of the financial district, designed by Danish starchitects Bjarke Ingels Group.