What would have become Toronto's tallest building was scaled back to 85 storeys through the planning process, and site clearing would ultimately get the ball rolling for the tower at Yonge and Gerrard back in April 2019.

Of course, things don't always go as planned in the real estate biz, something the project developer Cresford would learn the following year.

First, rumours emerged of a "cash crisis" in their development pipeline, and trouble for the developer was confirmed when Cresford's projects were halted and put into receivership.

It's been all quiet at the YSL site ever since. The preserved facades destined to live on at the tower base have stood idle around an excavated pit, often filled with pools of stagnant water.

But today, a spark of life emerged from this dusty pit.

Vancouver-based developer Concord Adex — best known in Toronto for their sprawling CityPlace community — has brought the project back from the dead, or at least a heavily modified version of it.

The story broke this morning, revealing the updated plan for the former YSL site. The Globe & Mail reports that Concord reportedly dropped a staggering $167 million on the property, though a large share of the payout went towards covering unsecured creditor claims, mortgages, and other loans.

Known as Concord Sky, the reborn project officially rolled out today just after the story broke, with statements from Concord executives sent out in a news release Wednesday afternoon.

"We are pleased to have acquired what will be one of Toronto's most iconic tower projects," said Terry Hui, President and CEO of Concord Adex/Concord Pacific.

"This will continue our skyline-defining presence in Toronto, including CityPlace and ParkPlace," continuing to describe the tower as "a vertical neighbourhood."

Concord Sky is set to rise 299 metres, the same as YSL's approved height, with 1,100 new homes within a profile that closely matches the previously approved plan.

There are some key differences, though. While the height is unchanged, 95 floors are proposed in place of YSL's 85. The only logical way these extra floors could be packed in without added height is by lowering the ceiling heights of the individual levels.

The design appears to have changed as well. YSL was designed by New York-based Kohn Pedersen Fox Associates (KPF) working with Toronto's architects—Alliance (a—A), though Concord Sky is a clear departure from the previous design, most notably through the addition of balconies on sections that were previously just glass, seen below. 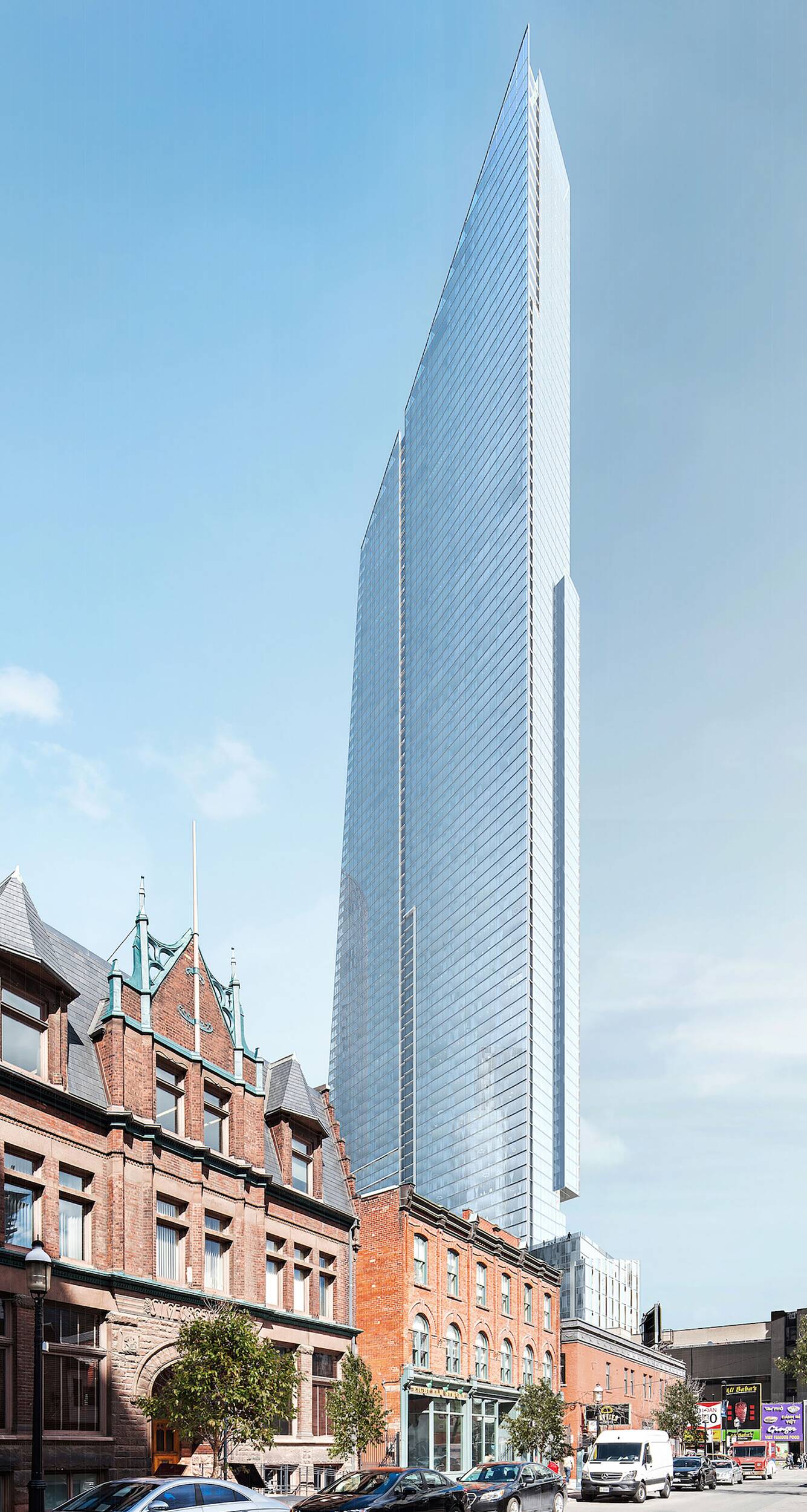 blogTO reached out to Concord Adex for clarification of the design team. A representative confirmed that while KPF was the original design architect and remains involved in the project, a—A will be the firm moving the revised plan forward. 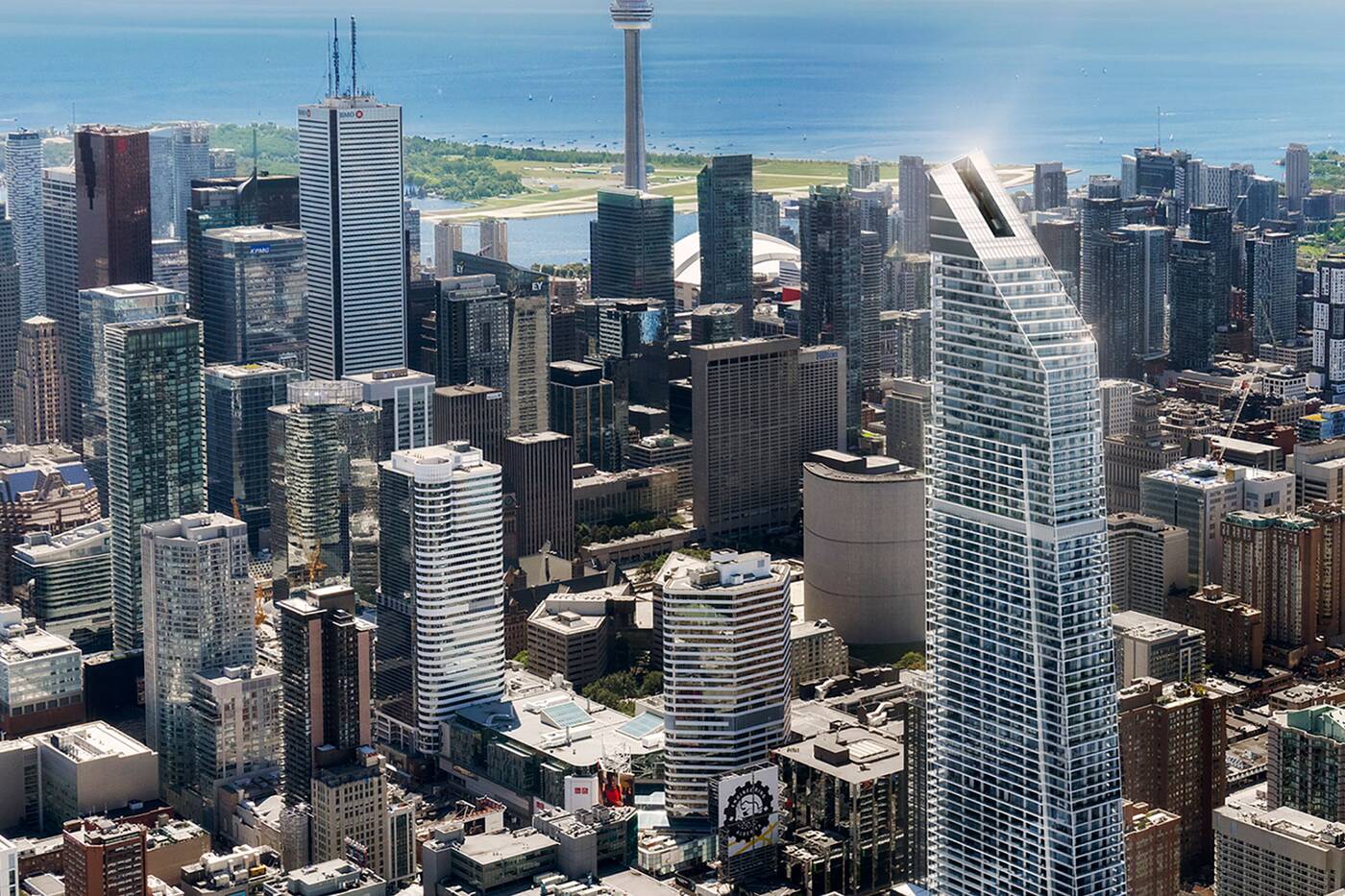 Despite this impressive height, it is almost certain that the tower will never bear the distinction of the city or country's tallest.

Two taller buildings are already well under construction, with the SkyTower at Pinnacle's One Yonge complex at the foot of Yonge Street, and The One being built a few kilometres to the north at Yonge and Bloor.

Five other towers exceeding the already-insane height of Concord Sky are planned in Toronto, and by the building's scheduled completion date of 2026, its scale could seem a lot less dramatic.