Get to know a Baker: Jean Blacklock, Prairie Girl Bakery

Jean Blacklock, owner of Prairie Girl Bakery, has a good thing going. When Prairie Girl Bakery popped up in the heart of downtown Toronto's financial district a year ago, my cupcake prayers were answered. With an explosion of business and a name that has become so well-known in such a short period of time, it's no wonder Prairie Girl Bakery has many new things on the horizon. I sat down with Jean on an early Tuesday morning--flanked by her bakers busy at work--to learn if she ever expected her business to take off in this way, and what we can expect to see from Prairie Girl in the future.

You started off in your career as a lawyer and financial executive; what made you want to make the move into baking cupcakes?

But as I did those things, I would treat myself to a little break in the day to plan my business. For me, the business had to be about food because I love food. I would take those breaks and think about the business' colours and menu and it started to build until it was this boulder. I said to my husband Andrew one night, "I just have to do this. It's really calling me."

Has the success of the business taken you by surprise? Can you discuss how you've grown in terms of your daily output of cupcakes?

The short answer is: yes, it's very much taken me by surprise. I look back at the financial forecast I first put together--very carefully and with a lot of thought--and it was laughably wrong in the right way. I say that not wanting to boast, but it was a wonderful thing. Initially, that caught my head baker, Andrea Ascione, and I really off guard, because when we opened we only had two stacked ovens which hold eight pans. We had three bakers, including Andrea, and I was the only counter person.

From the second day, we knew we were in over our heads so we had to hire very fast. I think we're at a staff of 50 now. It surprised me, but it's been great. When that happens to a business you have to be quick-footed. Luckily, Andrea is a well-respected baker so people followed her here. George Brown College also helped us find other people quickly. More recently, I'd say word of mouth--that Prairie Girl Bakery is a good place to work where employees are treated fairly--is helping, and we'll get unsolicited resumes both on the baking side and the customer service side. 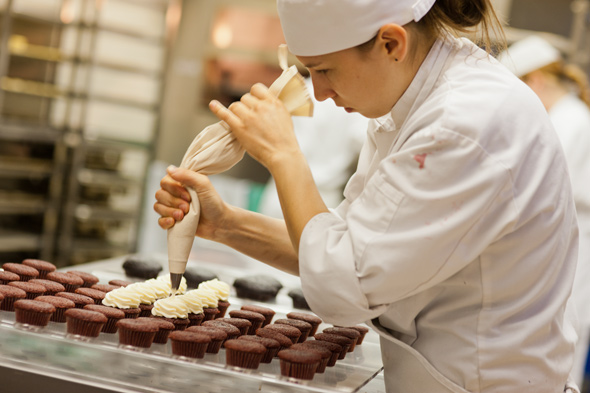 As the business has grown, you've hired more staff and are now in more of a strategic role. What are some of the challenges associated with this sort of transition?

When you're just starting out and you're completely rolling the dice as to whether downtown Toronto wants a cupcake store, you really don't have anything on the line. If it doesn't work out, of course you'll be devastated, but you do your best, you find a spot and you start. Now that we have some success, I feel the responsibility to continue to improve the product quality, improve the boxes, respond to the customers, and in my third store or fourth store, make the right decisions.

For example, with the first location, I figured anywhere in downtown Toronto would be fine. I now realize that the third location has to be a sound strategic decision, so the decision feels more heavily weighted. The other thing I take very seriously is being the full-time employer of 35 people. It's not just me on the line.

How do you maintain quality control when making so many cupcakes at multiple locations?

Andrea and I are completely on the same wavelength when it comes to our definition of quality. Our manual has photographs of all the cupcakes that Andrea has made and approved for the photographer. It includes the details for the bakers, what the weight and look is, and the range of colour that is acceptable. I'm also highly involved in the business. I'm here all the time and watching all the time.

The team knows that I would rather throw out the entire storefront than sell something that's not at our level. After a short while, that way of thinking works its way into the team. There are no short-cuts. Having that culture established helps a lot. 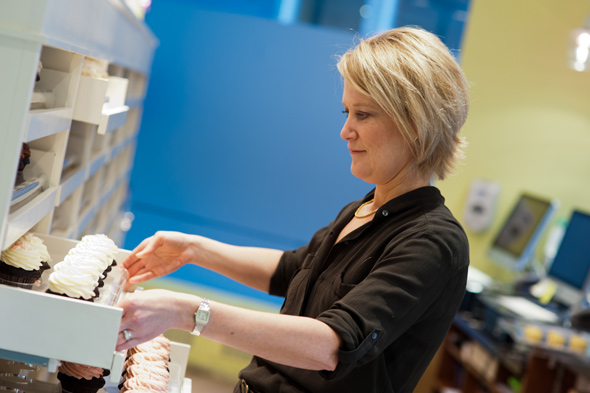 Do you see any end (or slowing down) to the public's seemingly insatiable appetite for cupcakes?

I clearly have a conservative background as a lawyer and bank executive, so in the preparation of my business plan I was very careful. In terms of describing the risks to my business, the top risk in my mind was the question, "are cupcakes a trend?" I felt that a trend that had started in the early '90s in New York, so by 2010, it probably wasn't a trend. Cupcakes appeal to something that is more enduring.

People light up in a way that they don't with a slice of pie, a whoopie pie or a doughnut. I see it every day in my business. The sight of a cupcake can make the saddest person smile a little bit. I think it's because it's cake and icing; that's something we take back to our very youngest memories of a treat. It's also yours. You get to pick your very own combination of cake and icing. So is it a trend and might the desire for it abate? It could, but I'm watching the growth of other cupcake stores as well.

For example, Crumbs Bake Shop did an IPO in the United States last year, and I think if it's a trend, so are a lot of other things, and I'm willing to take that risk. A caveat to that, however, is that I do think cupcake stores relying simply on the look of the cupcake have a limited ability to grow because there has to be the one-two hit. One being how cute the cupcake looks, but the second being how delicious it tastes.

What else can be done with the cupcake that hasn't already been done before at Prairie Girl Bakery?

One thing we're working on that we're really excited about is a birthday kit. These kits would allow your child to select the cupcake base they like and the icing they like which would come in piping bags along with sugar toppers. I've never seen that separation of the two and putting them together in a way that could be fun for kids. I think it will be well-received. I think my kids would have liked it. 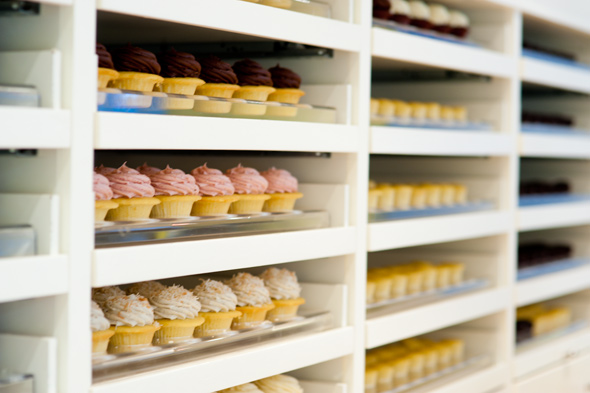 Are you tempted to offer other baked goods?

Yes, but very cautiously. Before I opened, I had the recommendation so many times to offer coffee, pop, juice, shortbread or biscotti. As you know, my products are given to charity at the end of the day, so that creates a situation where at the end of every day I have nothing to sell. We bake fresh every day, creating a whole host of issues like scheduling the right bakers. Things like shortbread and biscotti you can make a week in advance and worry less about, but I said no to all of those things. You come into my store and are wowed by all the cupcakes.

When we opened our First Canadian Place location, I didn't think people would want cupcakes first thing in the morning, so we created early birds, which were small coffee cakes in different flavours. Andrea and the team tested them for weeks. They were drop-dead delicious but they didn't work.

In the end, we sold maybe four dozen coffee cakes a day so we phased it out. To date, I haven't found the thing that I really want to do that's different from my 17 flavours in two sizes. I'm still open to it, but I'd definitely proceed with caution.

Any plans for the future you can tell us about in terms of menu or location?

I think the top three biggest things start with our third location. The key to my success so far has probably been in the business area--through firms that want cupcakes for catered events, client gifts and other large orders. This third location will be where there are other large businesses. The second thing I see coming within the year is getting a larger truck that can hold large boxes of the most popular individual cupcakes. We also want to really tap into the corporate event market where a bank, for instance, can have personalized cupcakes in a cost-effective way.

What do you enjoy doing in your free time?

If I'm having a bad day or a difficult meeting, in the back of my mind I always think, "the good thing is I'll be able to tell Andrew about this at dinner." I really look forward to my dinners at the end of the day with my husband. He's been so supportive in this. I also love to read--I have a Kindle and read a lot. I love to cook and bake for my kids. They love my cooking and baking, and I find joy in that. I don't, however, make cupcakes anymore. They're so good here, so why not just place an order like everyone else? 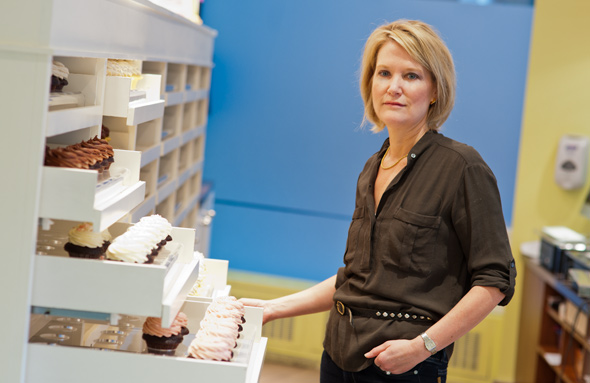 Most underrated ingredient? Butter. A lot of cupcake businesses use shortening, but butter makes them so good.

Favourite Toronto spot? My husband and I love going to Via Allegro in Etobicoke.