Toronto through the eyes of Andy Byford

The TTC appointed Andy Byford as Acting Chief General Manager in February after unceremoniously dispatching former GM Gary Webster. Byford quickly made the transition to the TTC's Chief Executive Officer, a position he held in Sydney for about three years. He's also spent time working as the General Manager of customer service for the London Underground.

Since making the move to Toronto, he's preached on the need for the TTC to continue to improve its customer service — from the operators and drivers to the cleanliness of the bathrooms. In March, the Commission launched a Twitter handle, @TTChelps, to address customer's issues. The TTC receives complaints daily, if not hourly, about something gone astray, so we know that Byford's got his work cut out for him.

We recently caught up with the TTC's top man to find out what he thinks of his adopted home and whether or not "world class cities" build subways.

What's an average day like for you? What steps are you taking on a daily basis to improve customer service on the TTC?

I have a personal goal of spending a minimum of 20-30 minutes every day on the network with staff and customers. It's the best part of the day, and I try to do a day in the life of a staff member's shoes every month by spending time with different departments. I also spend time in meetings, going to City Hall, attending events and dealing with the media.

Regarding customer service, I am convinced that we can achieve very early low cost improvements in system cleanliness and customer information, and we are putting a lot of focus into both areas. It's also very important to embed a culture of accountability into the TTC so that we can relentlessly drive up customer satisfaction, basic performance, staff morale and value for money.

I use the TTC every day to get to work and to travel around. If I'm going to Head Office (Davisville), I take the subway, stopping to say hi to the collector and interacting with customers while on the train. If I need to go downtown or across the city to Hillcrest, I make sure to take the bus or streetcar so that I get to use different modes.

In Sydney, I lived right downtown by Hyde Park. Here in Toronto I live in midtown so it's more of a village atmosphere with lots of independent shops rather than big department stores. Toronto has great neighbourhoods and I love the diversity of this city.

Have you had a chance to familiarize yourself with Toronto's cultural scene and nightlife? Any favourite restaurants or venues?

I think Toronto has a great bar and restaurant scene plus some superb museums. I also love the fact that there are so many classic diners here! I like to have the occasional brunch at the Senator or around where I live and lunch along the Danny on the weekend. On the cultural front, I have been to a number of the museums, plus hockey and the Raptors games at the ACC and TFC at BMO Field. I've never seen a CFL game, so I will definitely go and watch the Argos this season. 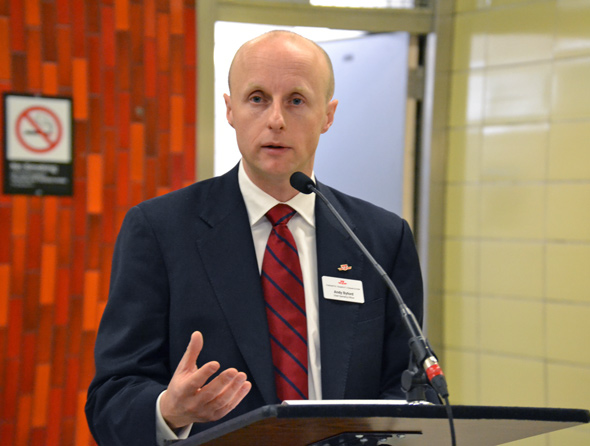 You've worked with various transit agencies, what are some lessons the TTC can learn from other cities?

We should have had a smart card ticketing system years ago but that's now being addressed. Our system signage and brand needs to be overhauled as does the way we deploy and train staff in customer service. Train service frequency is also less intense here. That said, I have never worked in a system that is so well integrated between modes as the TTC — the underlying design is still great.

What is the once piece of transit infrastructure that Toronto most needs? Why?

There is a definite need to provide relief to the Yonge Line which is approaching capacity even with new Rocket trains and signalling. At some point, further capacity will also be required to service the east-west downtown corridors.

It's good to see a rail link to Pearson finally under construction.

What is the biggest problem the TTC faces?

We are under-funded when compared to other major transit systems. A stable 10 year funding plan is a must.

If you had to give the TTC a motto - what would it be?

"A transit system that makes Toronto proud" — it's the new TTC vision statement that we have developed as a statement of intent for where we want to be.

Subway or LRTs? Both

Where do you get your caffeine fix? Tim's

Where do you get your hair done? [Laughs]