Toronto through the eyes of Bustle Clothing's Shawn Hewson

A bustle is a structure that expands dresses into fullness. But to Canadians who might not be as familiar with fashion history as they are with the au courant, Bustle is a popular national clothing label. The now ubiquitous line, launched by former Bay street lawyers and husband and wife team, Shawn Hewson and Ruth Promislow, has shown at LG Fashion Week for over 10 seasons and has been thriving since its inception in 2002.

Today, Bustle is known for its sharply tailored, almost bespoke aesthetic but the brand is by no means constricting. On the contrary, the subtle line's occasional hints of the uncanny and slickly wrought ingenious details point toward 'the fullness' of the client's personality - such is the task of the modern Bustle. Sharp but cheeky, unpretentious but clever, meticulous but fun is the Bustle brand. It is no surprise that the Bustle label is a product of the often self-deprecating, perpetually precise and ever-inspired (and inspiring), Shawn Hewson.

Where were you born?

I was born in Montreal, but "grew up" in Hamilton. My family left Montreal in the late '70s, when Rene Levesque was stirring up a separatist movement in Quebec. My dad is a doctor and teaches medicine...so from McGill to McMaster made sense. Thanks, Rene Levesque. Actually, growing up in Hamilton was pretty good. I did my undergrad degree at McMaster before moving to Toronto in 1995 to go to U of T Law School.

Did the city play a part in your decision to leave law and move into design?

I'd say the city played a part in my decision to practice law, and as well to give it up in favour of design. Toronto has a thriving business community, and working on Bay Street as a young corporate lawyer definitely had its allure and its moments. But the city also has a great design community, and living here has opened my eyes up to fashion and design more generally. I'm particularly interested in the number of 'crossover' opportunities we have come across within the broader design community...art, architecture, furniture, automotive, etc.

What about Toronto inspires you to design your clothing?

For me personally, inspiration can, and does, come from anywhere; both with respect to general themes and concepts, and also when it comes to small details. For example, in thinking about the design for uniforms we're making for the new Thompson Hotel here in Toronto, Ruth and I stayed at the 60 Thompson Hotel in NYC. We drew significant inspiration for our most recent collection from the vibe in the hotel, and from the whole brand energy of Thompson.

On the other hand, I also drew inspiration for the same collection from a man in his 70s in Little Portugal. He was rocking a vest with tie and tie clip, and looked super cool. The tie clip is now part of our Fall Winter 2010 collection, and as well will be part of the Thompson Toronto uniforms.

What part of the city most inspires you?

I really like King Street East. This is where our studio is, and also where we currently live. I like the people, the pace, the architecture, and the close proximity to the Central Business District. I also love what's happening around Queen and Carlaw. I feel like the people on this side of town are genuinely stylish in that they adopt their own personal aesthetic, regardless of fashion "trends." Nothing against the West end, but it seems a bit more homogeneous in terms of style. East side, baby!

What is the fashion community in Toronto missing?

Who is the most stylish person in Toronto?

Other than Ruth? Maybe Wendy Natale, Fashion Editor for HELLO Canada; she always looks amazing. I drove past her place early one morning, and spotted her picking up the mail in a blue fox-fur. Amazing!

Who is your biggest influence in Toronto?

Currently, that elderly Portuguese guy who lives around Dufferin and College.

My style is pretty much what you see on the Bustle runways - the menswear classics with a twist. Sharp, but a little cheeky. Typically, you'll see us take the same pieces and dress them up as well as dress them down. I do the same thing...French cuff shirts with jeans; casual plaid flannel shirts with tuxedo inspired jackets. There really aren't hard and fast rules as to what belongs with what, especially if you wear it all with confidence.

Have you ever been to New York Fashion Week?

I've been to the trade show weeks in New York, but never to a show at New York Fashion Week. Ruth has; apparently she and Robin Kay pranced out of tents with their matching fur capelets...right into the middle of anti-fur demonstration. Oopsie!

What's your favorite place to travel. Why?

I love going to Amsterdam. I went to university there, so I know the city well, and have been back several times since. The people and the street styles there are amazing; you could sit and watch the human traffic all day.

What are you homesick for when you travel?

I generally don't get homesick when traveling, but I do love the local spots in my neighborhood, where bumping into other regulars is an everyday occurrence. Sometimes making plans to meet for a drink or two can be overly complicated with the schedules my friends keep. Mind you, if I pop into Weezie's for a quick bite, or walk over to Betty's on any given night, I'm likely to see at least one or two of them. 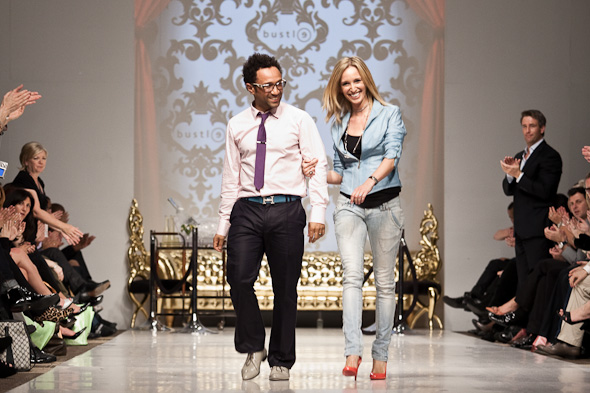 How do you feel about the location changes this season at Toronto Fashion Week?

Well, it's unfortunate that LG Fashion Week has outgrown Nathan Philips Square, as well as a number of other potential venues, but at the same time, it's a great sign that the week continues to grow.

Are you satisfied with Toronto Fashion Week's progress? How would you change it?

Bustle has been showing at LG Fashion Week for over 10 seasons; we remember when shows were held on the mezzanine level at the Windsor Arms, and the models had to squeeze past spectators in tiny rooms and hallways. Now, the main runway room seats 1200 people, and the collections going down that runway are World class. LG Fashion Week is an internationally recognized event that is broadcast around the world, and it brings an incredible amount of attention, tourism, and frankly economic activity to the city and the Province. Though it's very en vogue to criticize LG Fashion Week, I find it difficult to do so.

If you were to open a store, where would you put it in the city and why?

Describe your ideal night in Toronto.

We'd start the night off at our place, with an assortment of misfits from different walks of life. Cory Boyd and Jeff Kirkwood (with his turntables), Anwar and Glenna, Natalie and Tommy, Bateman, Tristin and Jo, Matt C. and Angie, Art Lampa, Robin Kay, Kelley Burns Coady and Steve Coady, Sully and Maureen.

After deciding once and for all whether we liked Moet or Veuve better, we'd all head to Buca to take over the (more dimly-lit than the front) back room. There, we'd run into Laurent Fort and Karsten Ruwoldt, trying to talk business, and Nat Brown and Remo Tantalo trying to have a date, and we'd swallow them up into our vortex of fun.

After dinner, we'd head over to the newly opened Thompson Hotel to check out the slick new lounge, where we'd run into Yasmin Warsame, Mich Ahern and Jie Matar, having drinks. We'd swallow them up too. At some point, Ruth and I would sneak out to check into our suite at Hotel Le Germain, and then we'd return to Thompson to rejoin the fun. While others were checking into their rooms at Thompson, a satellite group of us would head over to Boehmer on Ossington, to collect Norwayne Anderson and his posse of glamazons. Also there, and also willing to be swallowed up, would be Melissa Austria and some fashionable gals I don't know.

I'd then run across the street to grab Evan Biddell from his OZ Boutique, where Gavin and Kimika would be doing some private shopping. Finally, we'd call the crew still at the Thompson to tell them to meet us at Footwork, and with another call to Joel and Steph, we'd be in the doors, reunited with the rest of our posse, and dancing to the beats of the legendary Derrick Carter. What would happen after that, I can't even imagine.