Toronto Through the Eyes of Dan Levy

Dan Levy may make his living roasting the ridiculous behaviour of those on reality shows like the Hills, the City and Peak Season. But after spending his days dissecting said melodrama for the home viewing audience, he says he's glad to live in a city that appreciates culture, good eating and even the odd open space.

Providing his take on pop culture daily alongside Jessi Cruickshank, Levy has helped MTV's After Show become appointment television for teens, while raising his profile as a homegrown media personality. Here Levy discusses his life in the city, why Toronto fans matter to the After Show, and where he brought the cast of the Hills when they were in town.

Growing up you spent time in both Toronto and Los Angeles. How do you compare the two?

I've spent the majority of my life here. I've lived in Los Angeles for a couple years over the past 26, but my parents chose to raise my family in Toronto just because it's a better city. The priorities of the city and the people who live here are very different from those who live in Los Angeles. A waiter at a restaurant here isn't trying to get into the next James Cameron movie. There's just a different vibe, and I think there's a superficiality in Los Angeles that's kind of unfortunate. And Toronto [is] much like New York or any other city that values culture. You don't really get a lot of that in L.A. You have a beach and you have a car.

Where did you spend your time growing up in Toronto?

I feel like anyone who's sort of lived in Toronto goes through the phases of being young and hitting all the spots. Future Bakery was a big spot when I was in high school. Green Room close to Future Bakery was also a big spot when I was growing up. And then once you get an income and a job, you suddenly realize the city has nice restaurants and things which are suddenly affordable. So now I don't go out that much, but an ideal night in Toronto for me is finding a really nice restaurant with a few friends and spending a night there. And I think Toronto, as of the past couple years, has seen lots of really fantastic restaurants open.

I've been to Delux a few times. I think Pizzeria Libretto is the best place to go if you want to sit down. Massimo's, the new one on Queen is really nice for a late night bite. Giancarlo has been a restaurant that my family has gone to for every birthday or any celebration. It's the best Italian food I think I've had outside of Italy.

What neighbourhood do you live in now, and what do you like about it?

I actually live near the Ryerson campus, down near Dundas. And though I don't spend a lot of time there, I really like my apartment. The Yonge-Dundas Square situation is not necessarily a place where I want to spend most of my time. But I think being mid-Dundas, in between east and west, I've found it to be a really great place because I'm close to my friends who live on the east side, and it's also easy to access to the west side. So it's a good location. I don't brunch around my apartment but there are other places for that. 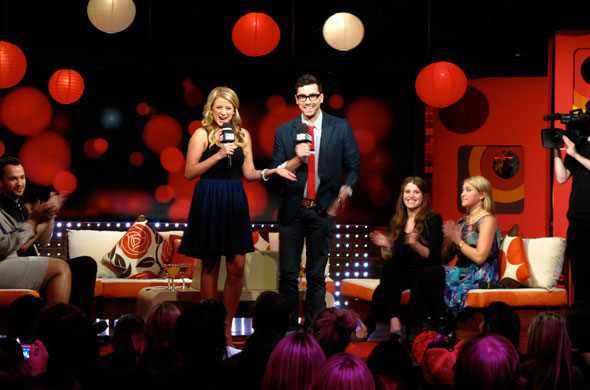 What role has the city played in the success of the After Show?

I don't think we would be anywhere at this point if it wasn't for the Toronto fans of the show who came out in droves to show their support when we needed and wanted them to. I remember the first time that the cast of the Hills came in, I think we had like 3,000 people show up. And we work in a basement. So we really had no idea what to look forward to...and suddenly we're getting reports from our friends who are going out to lunch saying there are line-ups around the block...around two blocks, around three blocks.

And one of the building managers who used to work here [at Masonic Temple] when Iggy Pop and David Bowie came, he was saying I haven't seen a line-up like this since David Bowie, and even then I didn't see that many people show up. So I think there's an enthusiasm from Torontonians and the people who live in the GTA who have come out and really helped the show and helped create hype around it by just physically being here in studio. And it's made us feel more comfortable, and I think it's set a really good tone for the rest of Canada by showing how excited our audiences are. That's helped in creating whatever it is we do now.

How does the experience of the show differ when you take it to New York or L.A.?

This is when we really value the Canadian industry we work in. Both have their ups and downs, but when it comes to the content of the show Canadians have a level of...I want to say sophistication, but when dealing with content like an episode of the Hills it's probably not the best word to use. But Jessi and I are always in on the joke, even when it's on ourselves. And Canadian audiences know that. They get the joke; they're in on it. They get the fact that it's very tongue in cheek.

When you go to the States it's like things have to have a Disney brush painted over everything that happens. Suddenly jokes have to be a little bit more broad. Everything has to be a little bit simpler. And to be honest, I feel like they're not really giving the American audience a chance to know what it's like not to be talked down to... 'cause sometimes it's really sort of shocking.

When the cast of the Hills or the City comes to Toronto, where do you recommend they go?

When Lauren [Conrad] and Audrina [Patridge] came out, it was the end of the night when we went out. We had gone to some bar, and they wanted to eat something. So it was me and Lauren and Audrina in a car at around three in the morning, and I suggested we go to Fran's. So now we're at Fran's at College and Yonge, and they're closed. I assumed they were 24 hours. I think they are. That one night they were closed. Now I have Lauren Conrad banging on the window at Fran's asking them to open up. They wouldn't do it. I really don't think they knew who she as, not that it would matter. But we ended up going to 7 West, and spending the rest of a very, very late night there.

Is there anything you'd change about Toronto?

You know I think I've just sort of grown so comfortable here that I don't really notice it changing. The one thing that I have noticed is this influx of condominiums. There are so many condos popping up all over the city, and I just wish some people took a little more time to think about the aesthetics instead of just throwing them up.

It's unfortunate to see all these very cookie cutter condos just blocking views because Toronto is such a beautiful city. I just like the greenery. I grew up in a neighbourhood that I think is still one of the most beautiful places when the sun's out and the leaves are out, and that, for me, is the reason to live in Toronto: the accessibility of parks or the ability to walk down the street and not feel suffocated.

Where do you like to shop in the city?

Shopping for guys in Toronto is a really tough thing because there's not a huge market for it. So for me when it comes to the show, I'll shop at Sydney's, which I think has the best taste when it comes to clothes for guys. I also think Jonathan + Olivia is really great and y'know, Delphic....But I think shopping is hard for guys, though I've had luck finding things in those stores.

How would you spend an ideal day off in Toronto?

I walk a lot, so it would probably just be walking. It would be walking to meet friends at brunch at Saving Grace. I'd probably walk past Trinity Bellwoods where I will no doubt run into someone else I know. And eat, spend the day in the park, and then sort of see where the night takes us. Ted's Collision is a popular choice, or Sweaty Betty's.