Canadian Elton John fans were delighted to learn last month that the musical superstar had purchased a (yet-to-be-built) penthouse in downtown Toronto, high atop King West in one of the city's most-anticipated condo developments.

The 75-year-old singer and songwriter revealed his latest residential aquisition — which will be his sixth home with Canadian-born husband David Furnish — to The Globe and Mail on September 8 while in town performing back-to-back shows at the Rogers Centre.

John's purchase of a penthouse in the forthcoming KING Toronto development by Denmark's Bjarke Ingels Group (BIG) confirmed what many locals had long been suspecting about the mountain range-inspired complex: That the people who live there will be super rich. 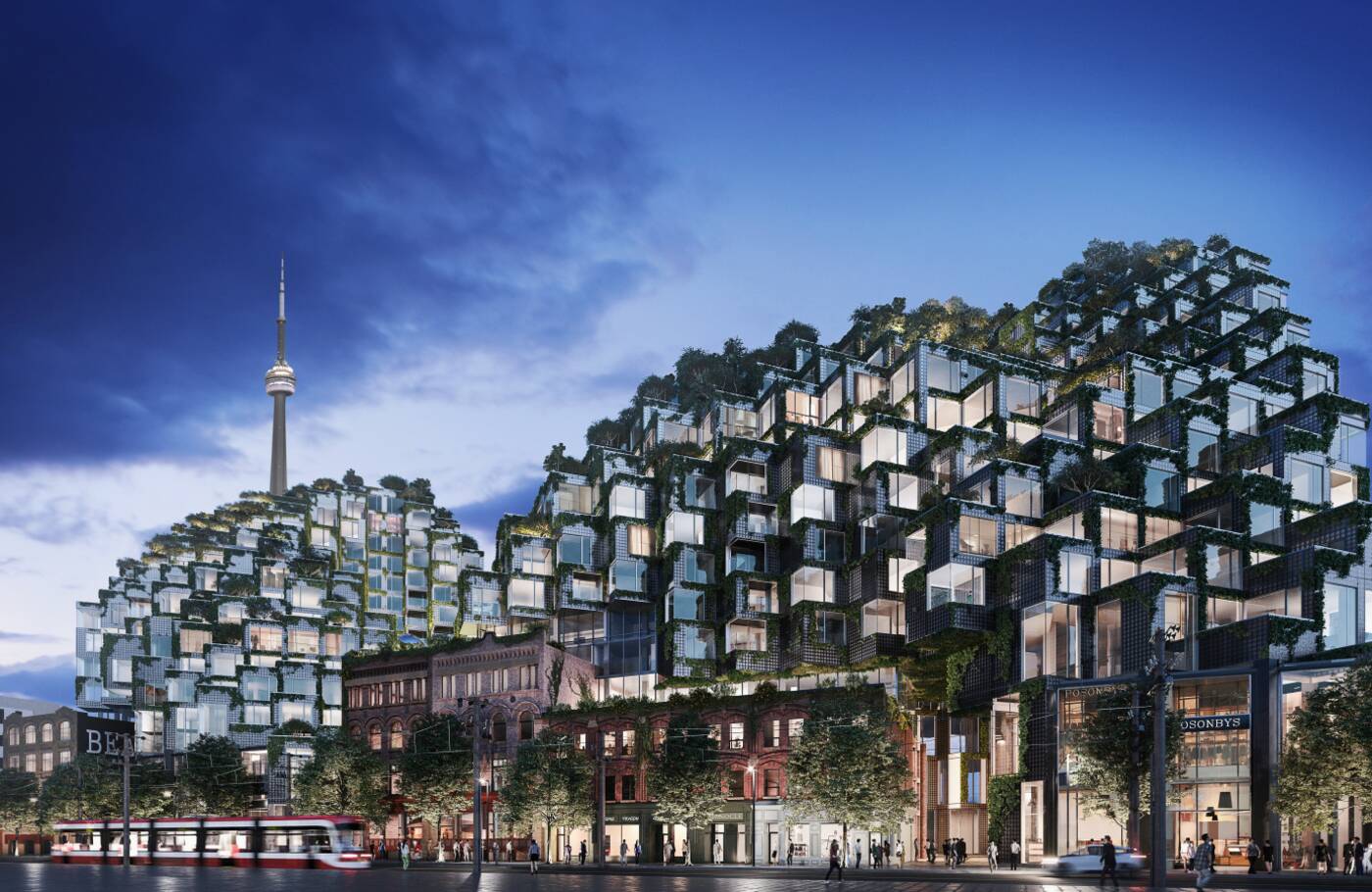 Prices for units at 489 King St. W. start in the seven-figure range and run as small as 478 square feet.

Parking spots alone are currently going for about $170,000 in the Westbank Corp and Allied Properties REIT project, which will span King Street from Spadina to Portland and feature a mix of condos, office, and retail space.

Sir Elton will be paying considerably more for his pad atop one of KING Toronto's four pixelate peaks than the average resident, of course. We don't know how much exactly, only that it was likely quite expensive as the only unit of its kind in the city. 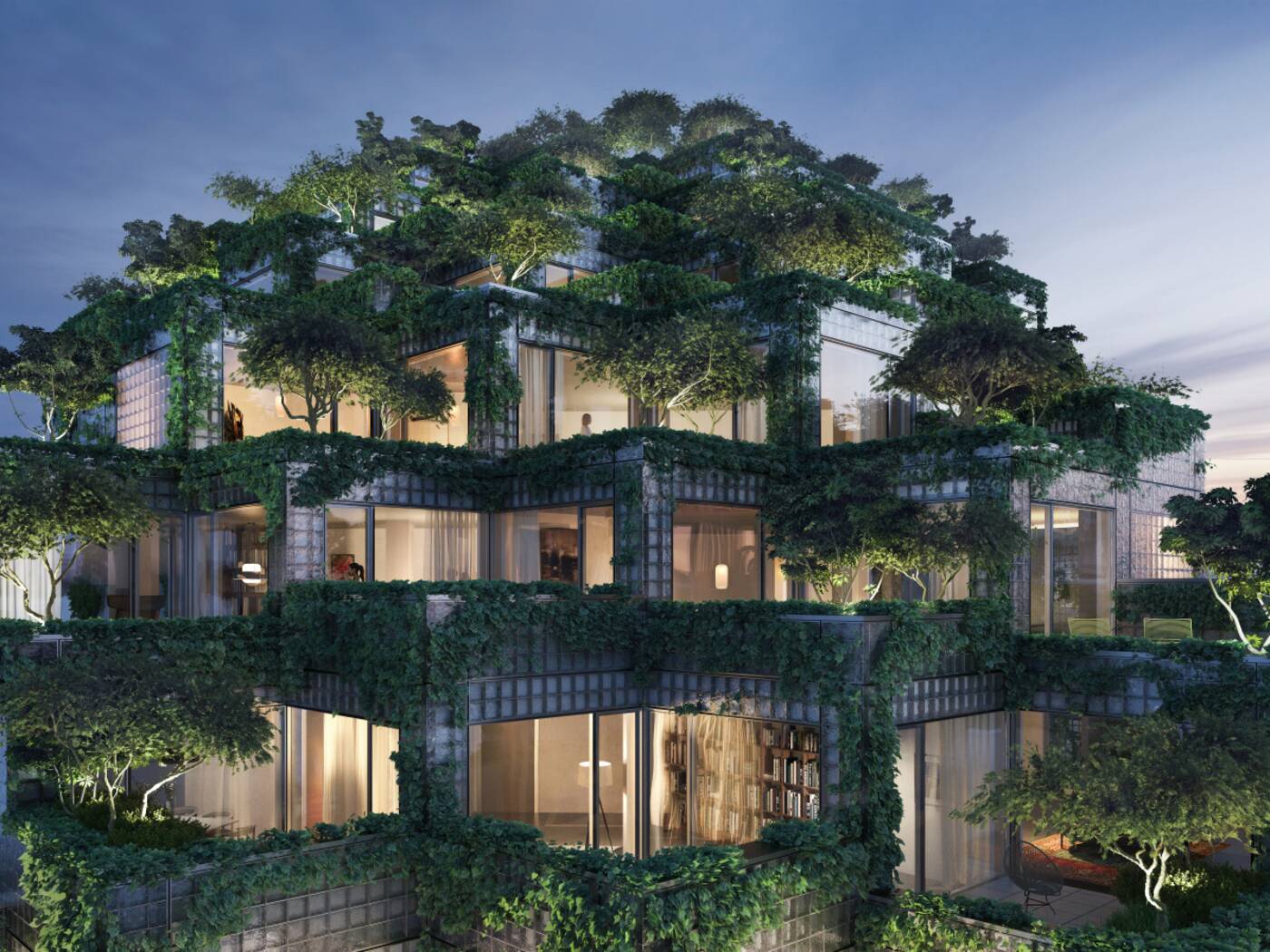 "Each peak overlooks a different part of the city and rises above the diverse public space at the ground level. Atop each of the four mountains, the two-storey penthouse levels form floating sanctuaries, set high above the urban neighbourhood of King Street West."

John, Furnish and their tween sons, Zachary and Elijah, will be living in a sanctuary called "The Treehouse," according to The Globe, one of only six within the entire, futuristic complex. 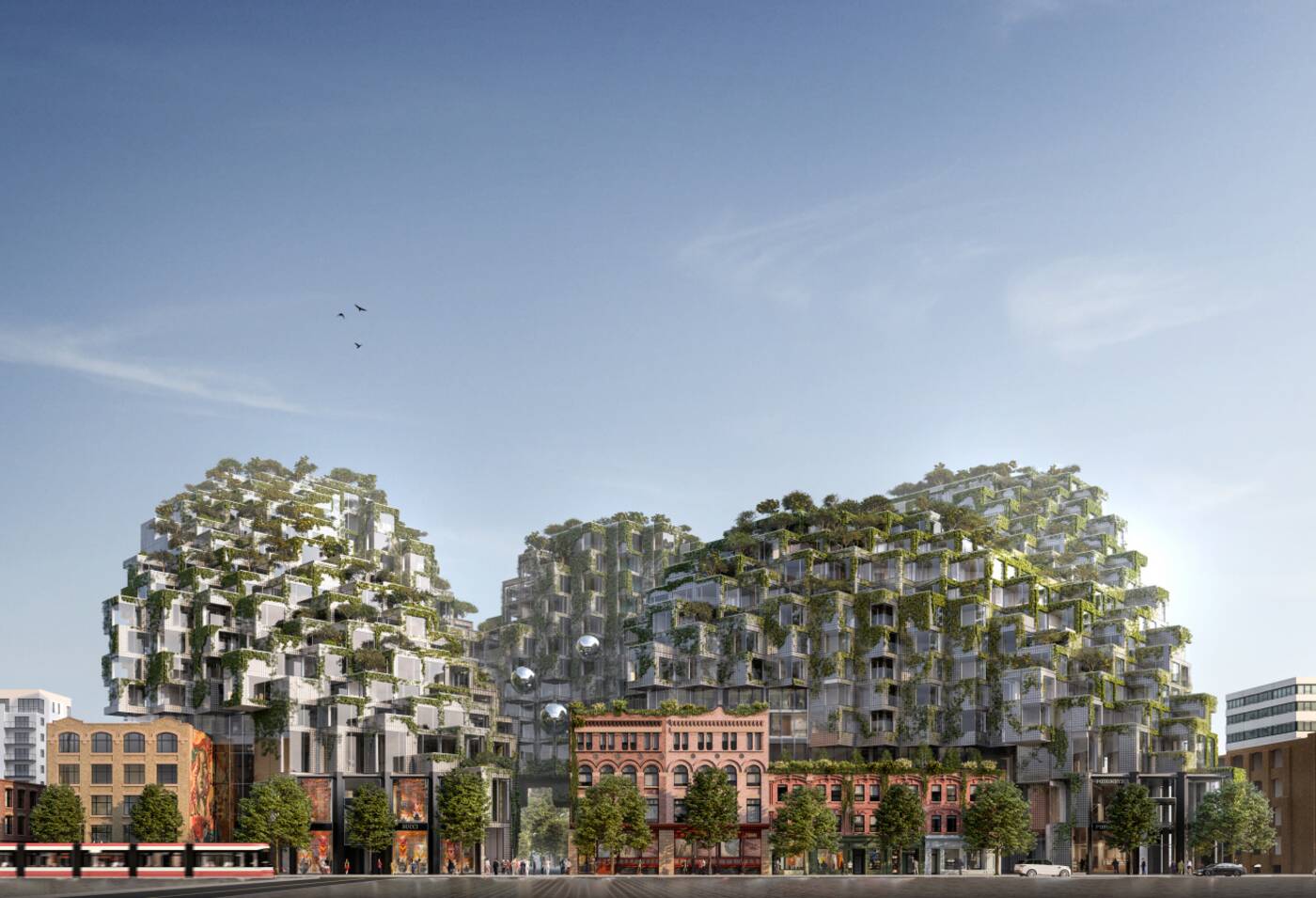 Here's what we know about the British icon's forthcoming Toronto pad and what it will look like upon completion sometime in 2023 (or whenever developers actually manage to wrap up construction). 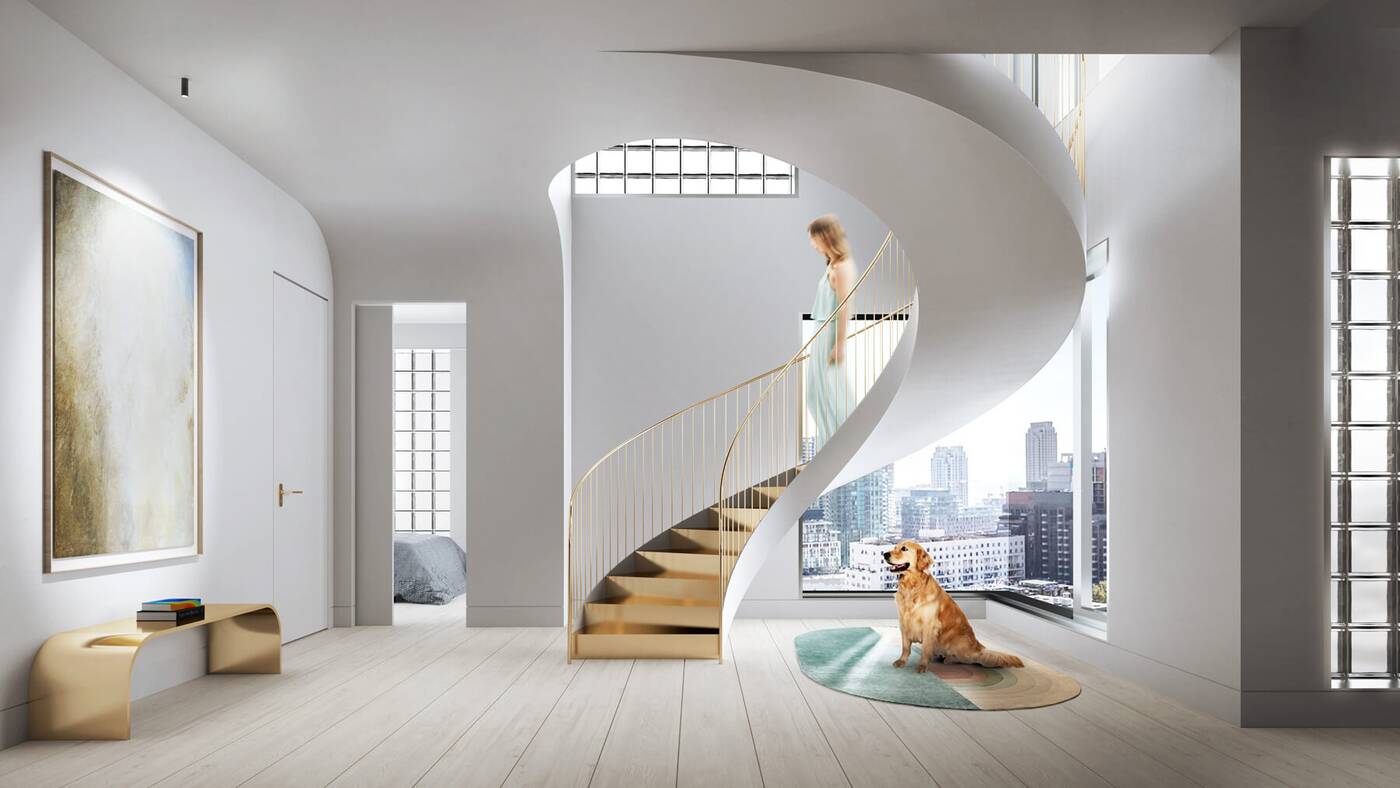 Penthouse One West, aka The Treehouse, will live atop the western peak of BIG's urban mountain range, nestled amongst trees, foliage and at least four private outdoor terraces. 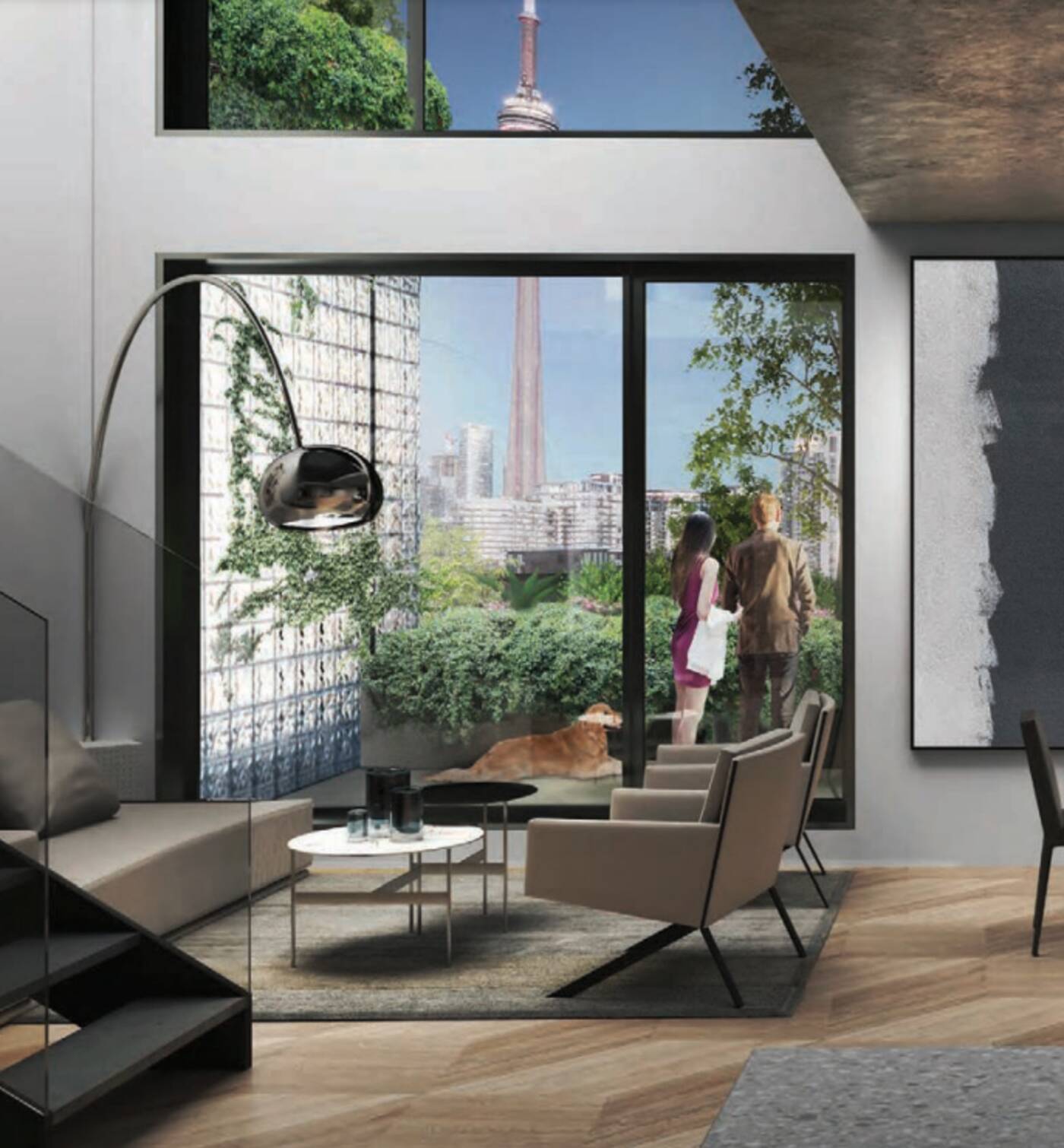 The two-floor unit boasts roughly 2,602 square feet of interior space and another 600 square feet of terrace and balcony — including an inner courtyard with a live, mature tree. 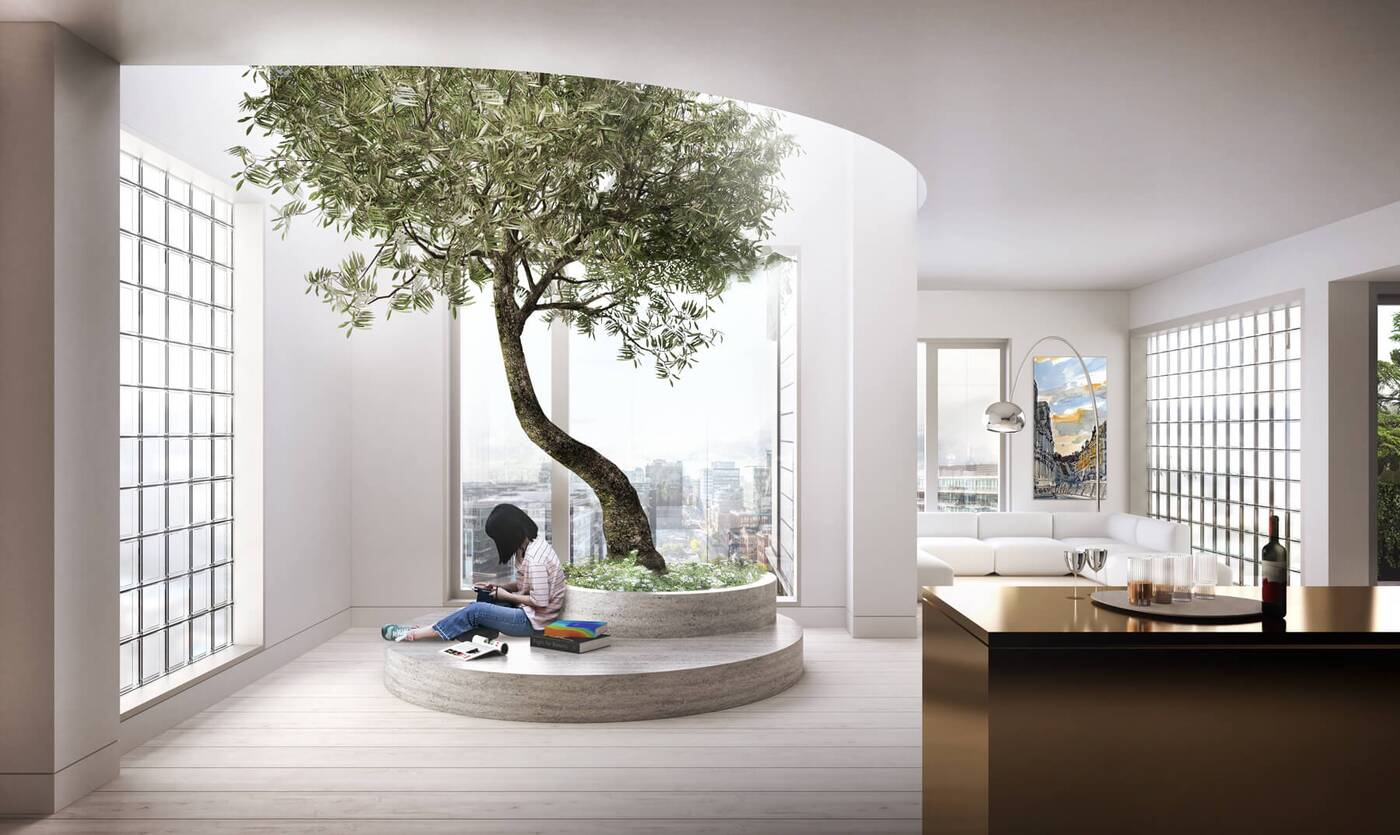 The family will have three bedrooms and three bathrooms, for whenever they're in the area visiting Furnish's Canadian family and friends. 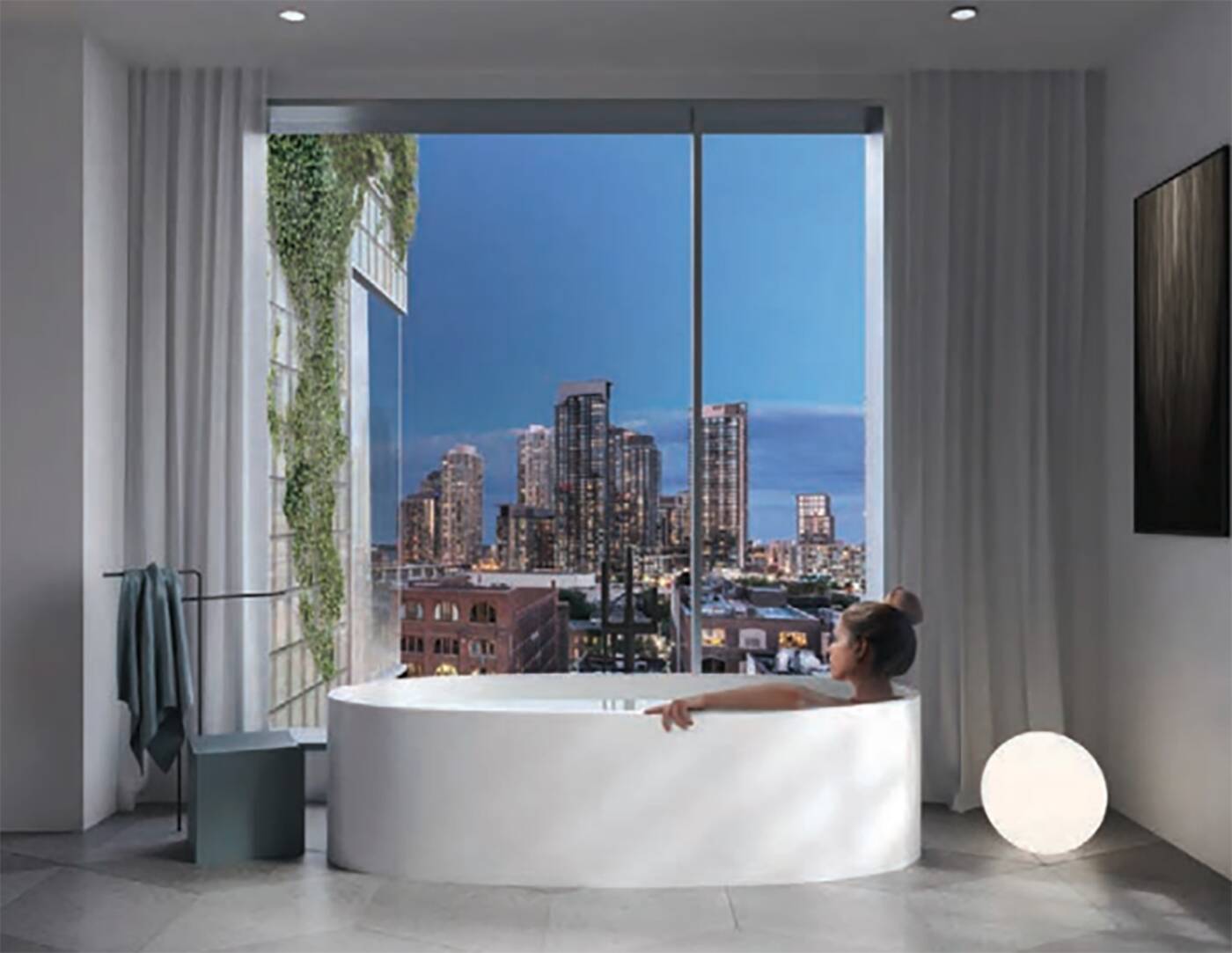 "The materiality of the bathrooms is inspired by the concept of anchoring the service spaces within the homes," reads the unit's description. "The West Mountain bathrooms feature dark stone and tiled walls with contrasting matte custom terrazzo flooring." 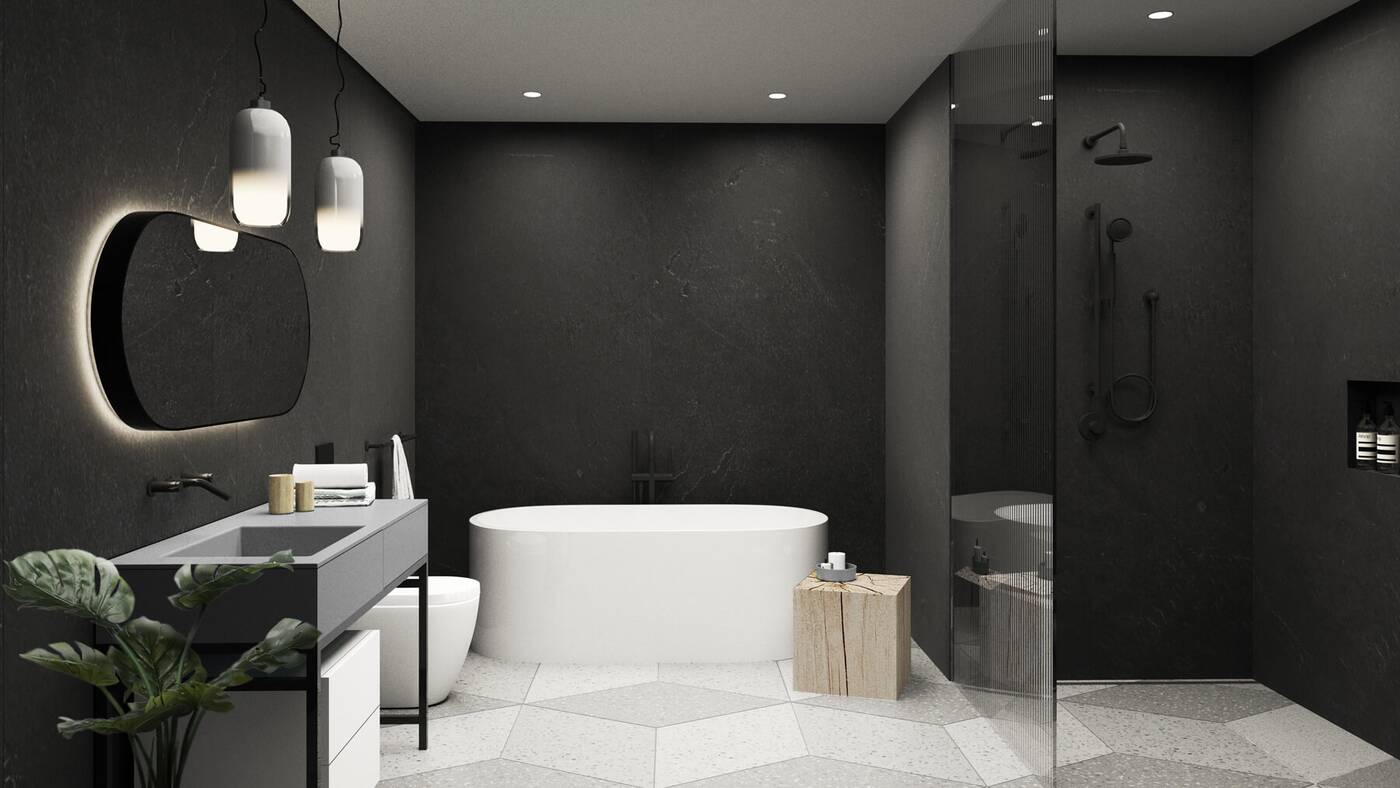 As for the custom brass kitchen designed by BIG, it will feature "integrated Miele appliances in black chosen to complement the warm
metallic finishing." 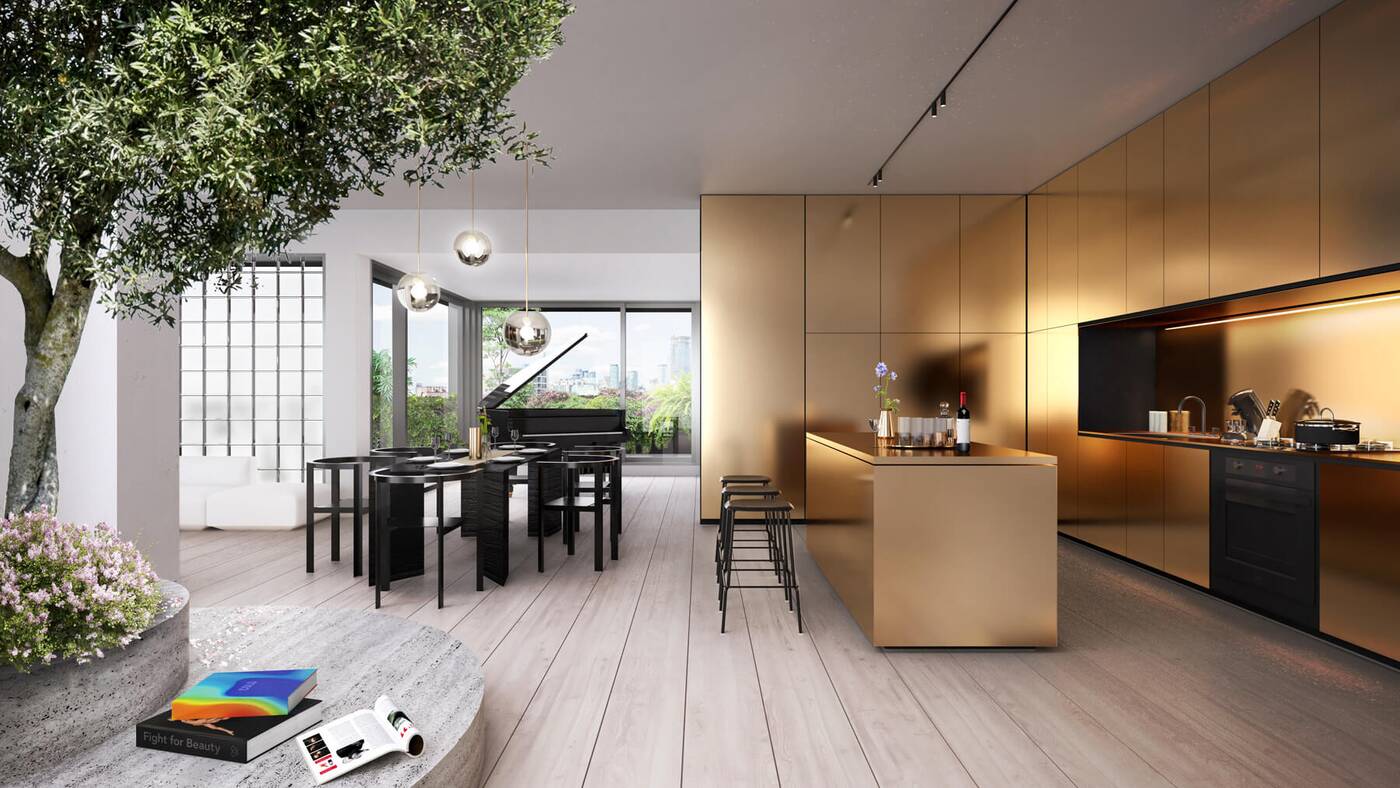 Overall, the space has gorgeous flow, as was the intention of its designers. Here's the first floor for reference: 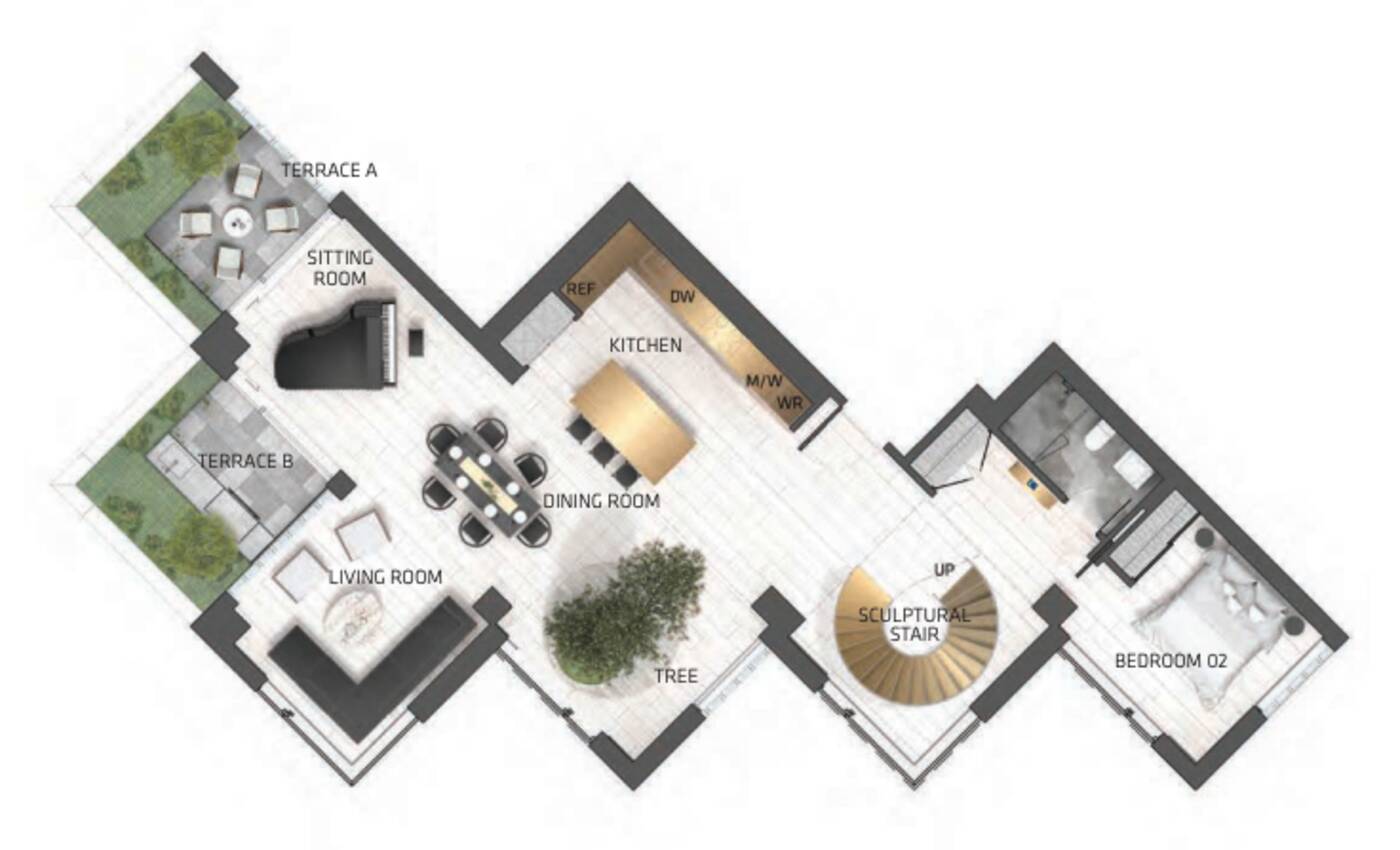 And here's the second: 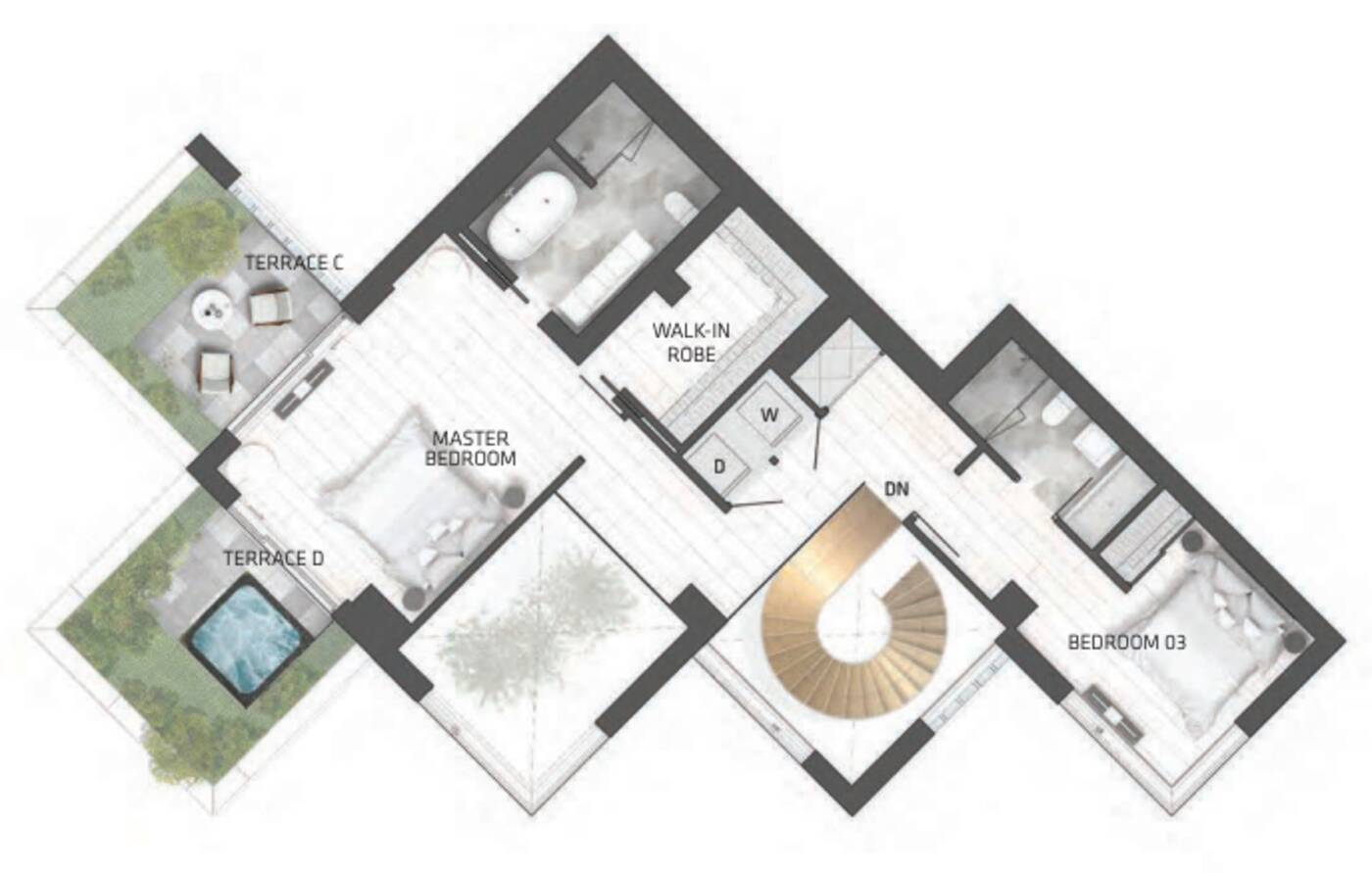 "The Treehouse's unique character is derived from these architectural details, inspired by the light and futuristic design language of Eero Saarinen," reads a brochure for the property.

"A multitude of outdoor terraces allow residents to experience the setting sun in the evenings and watch as the sumac trees create dancing shadows on the curved and arched interior walls."

The fact that the unit has a built-in piano nook surely called out to the Rocket Man, just a bit. 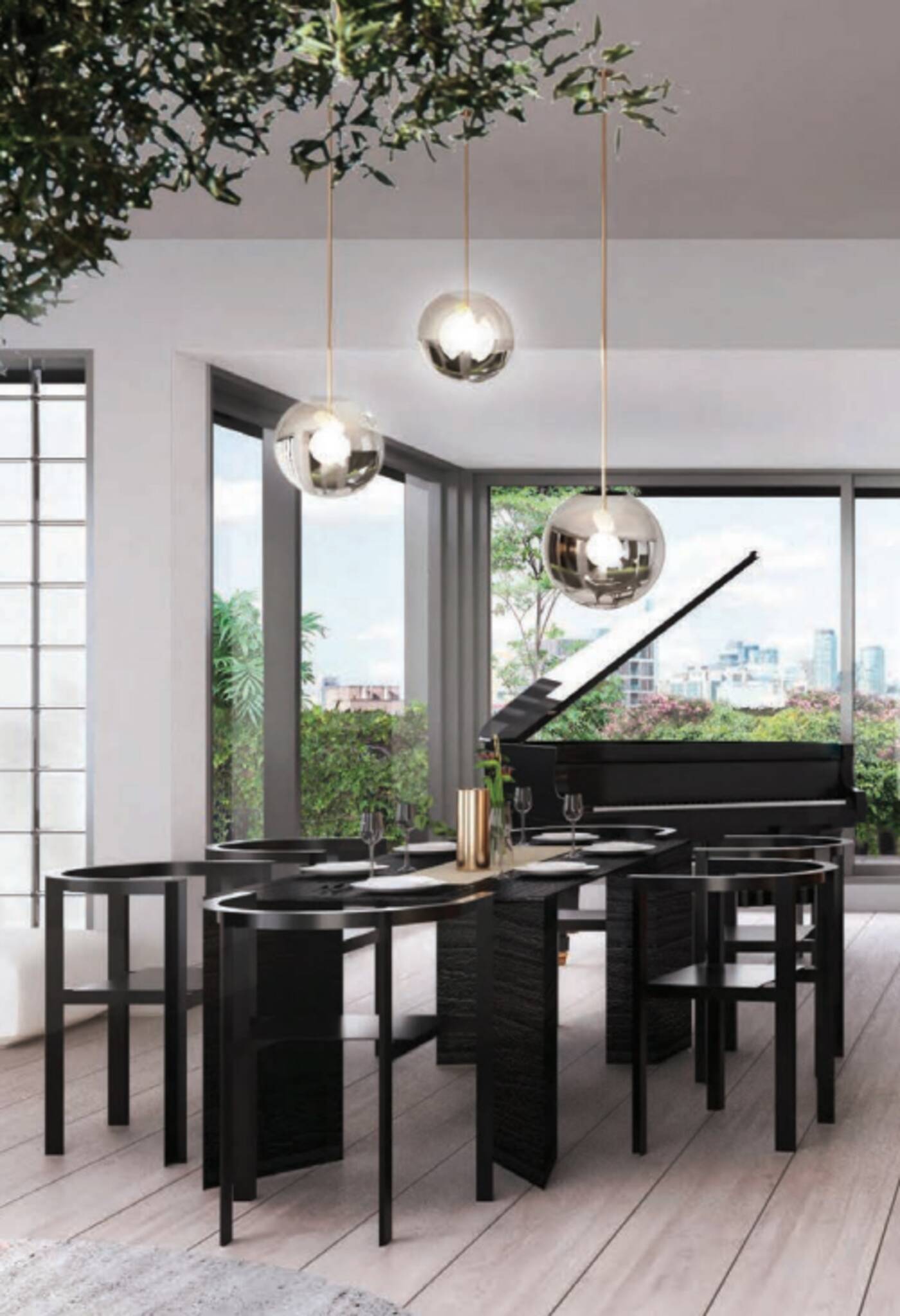 That, or the abundance of natural light and material elements.

"Light, particularly natural light, keeps us focused and alert. It helps regulate our biological cycle, which keeps our stress hormones in sync," say the home's designers.

"In considering this impact, the lighting within the Penthouses at KING Toronto has been considered for both its aesthetic and its impact on residents’ overall wellbeing."