Toronto's relatively flat natural landscape is often called out by residents of cities out west, like Calgary and Vancouver, both known for their gorgeous mountainous landscapes.

The enormous condo complex under construction at 489 King St W., between Spadina and Portland, may not be the tallest or largest thing being built in the city, but its unconventional design from acclaimed Danish architecture firm Bjarke Ingels Group, or BIG, will be unlike anything ever seen in Toronto.

With a site encompassing over 140 metres of King Street frontage and a handful of preserved heritage buildings and facades, the KING Toronto complex from developers Westbank Corp and Allied Properties REIT will feature a mix of condos, office, and retail space. 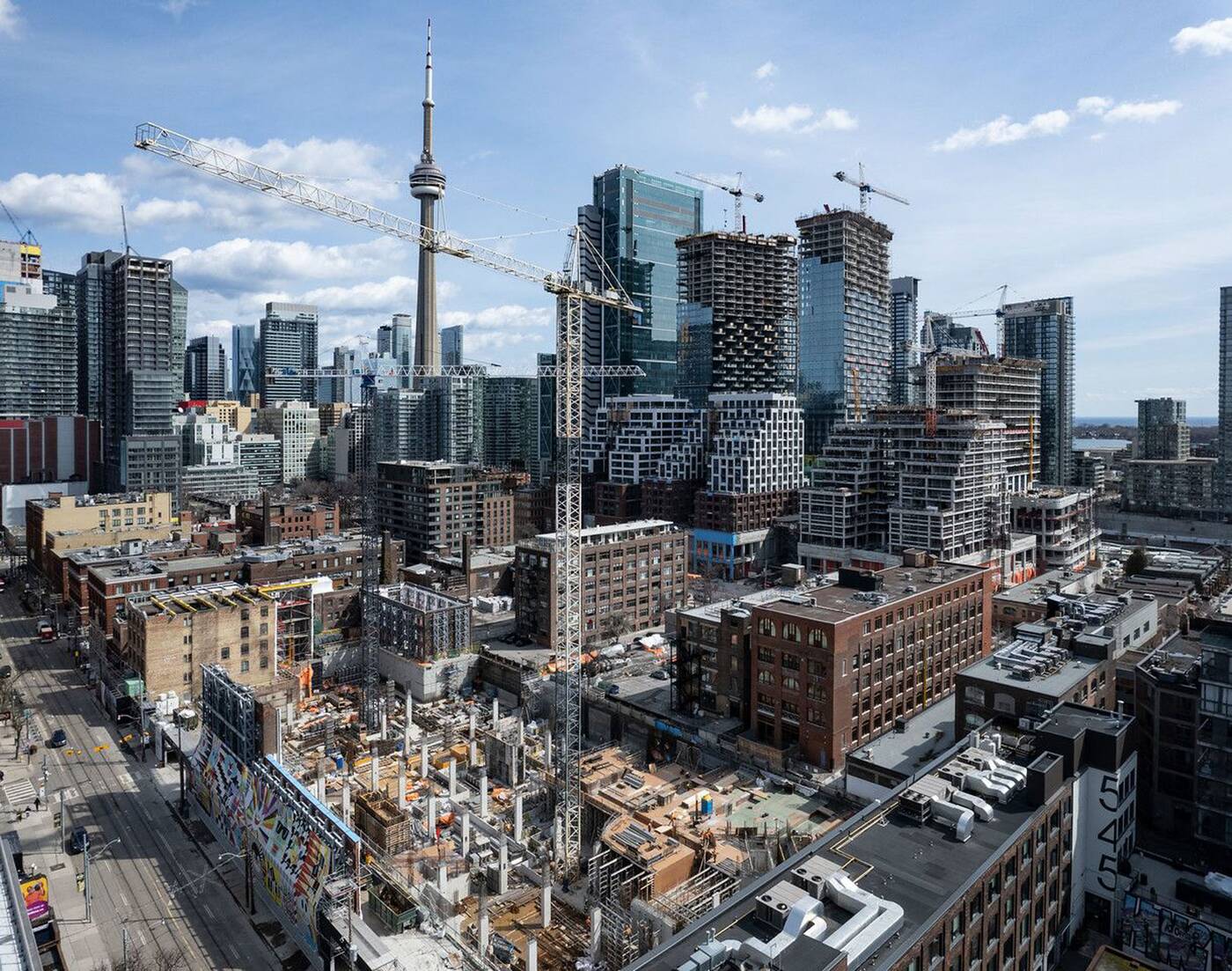 Rising 16 storeys to a height of over 57 metres, it won't be the tallest mountain range, but with a breathtaking design finished in glass blocks and topped by lush greenery, it's primed to be one of the city's most significant architectural contributions in recent years.

A recent update shared by EllisDon, the contractor building the mammoth mountain range, offers a glimpse into the impressive statistics behind the project as work prepares to move beyond the three-level underground parking garage and above King Street. 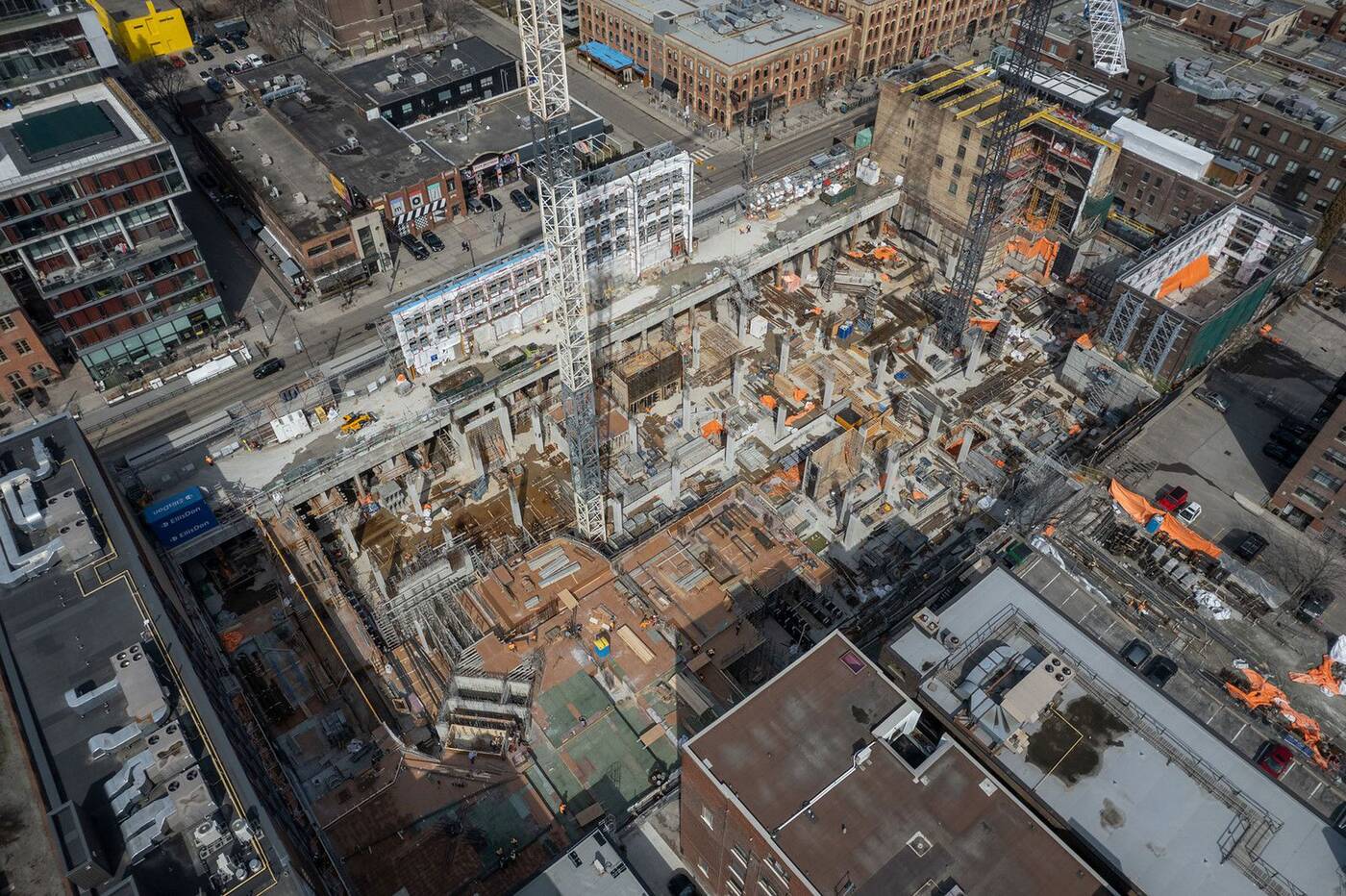 "With over 13,000 cubic metres of concrete and 3,000 tonnes of rebar installed, the KING Toronto condo development project is taking shape in King West Village," the update says. 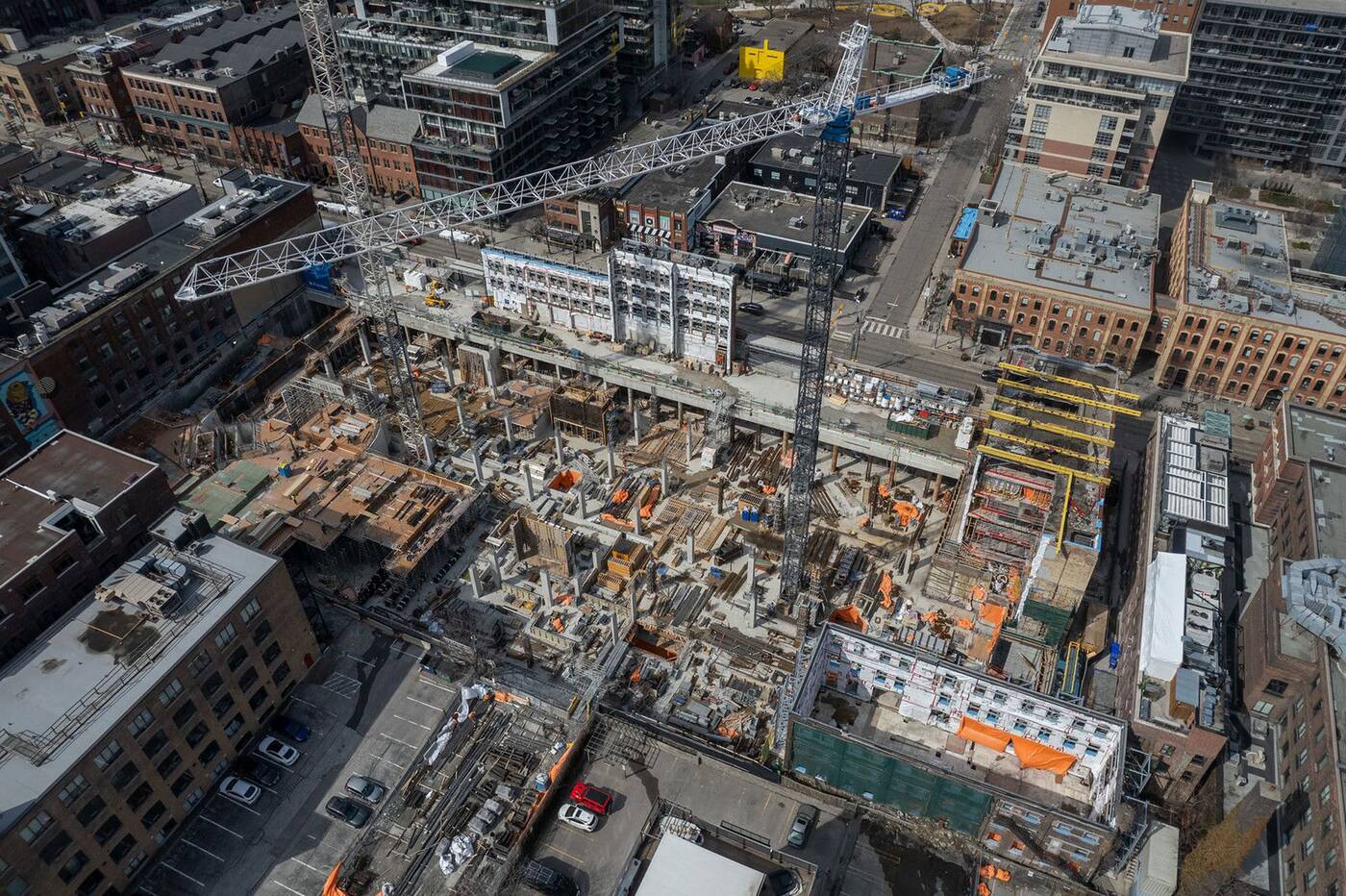 P1 level columns are in place with the ground floor coming soon at the KING Toronto site. Photo by Paul Casselman Photography via EllisDon.

"EllisDon's construction team has been hard at work completing all public utilities, civil connections, and finalizing the below-grade structure for the first ground floor slab." 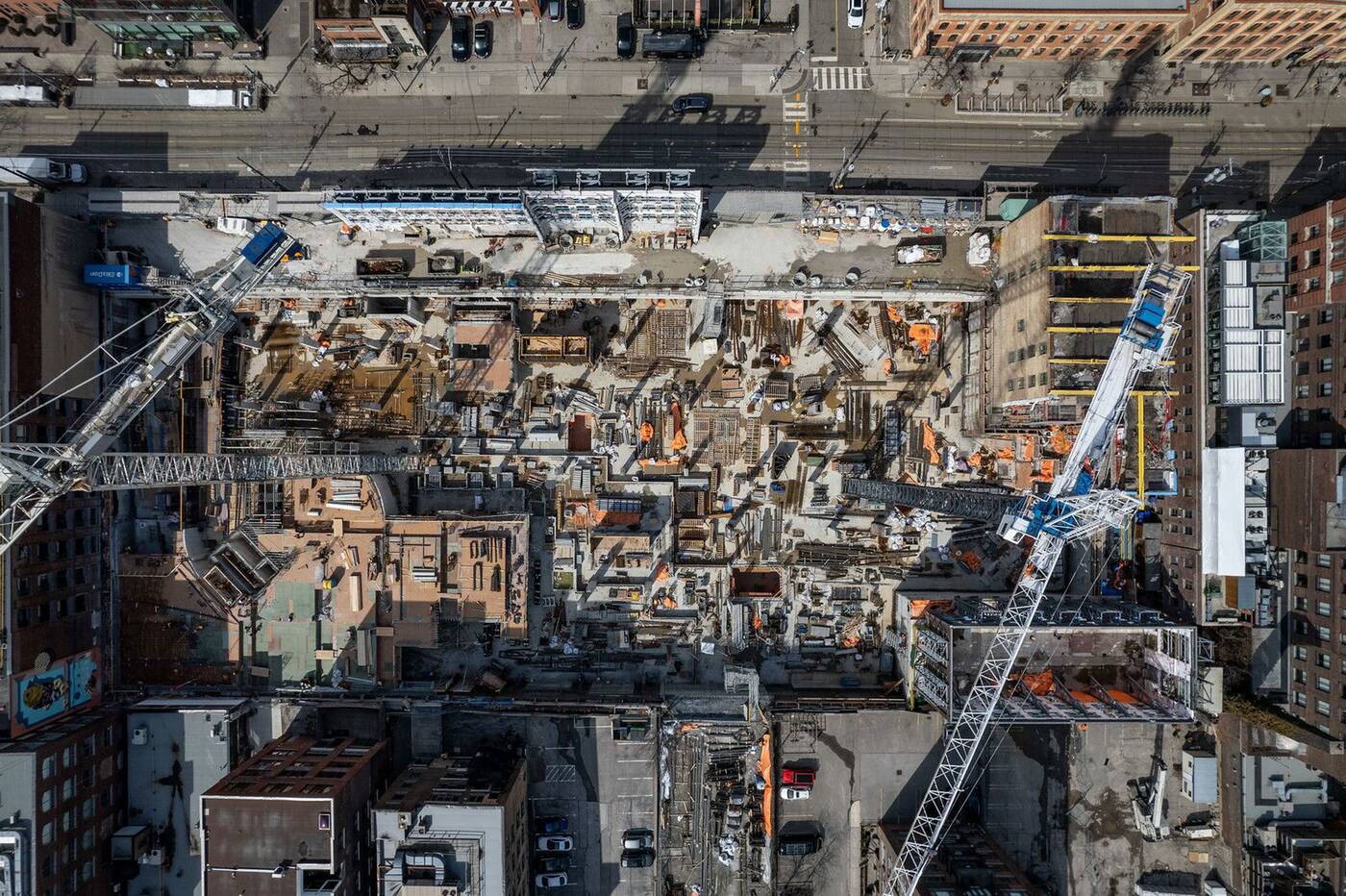 This P1 level is the uppermost in a three-level parking garage for residents, visitors, and retail tenants. Photo by Paul Casselman Photography via EllisDon.

The slab in question will bring construction up to the level of King Street, forming the ground floor of the complex and marking the first progress in the building's vertical ascent. 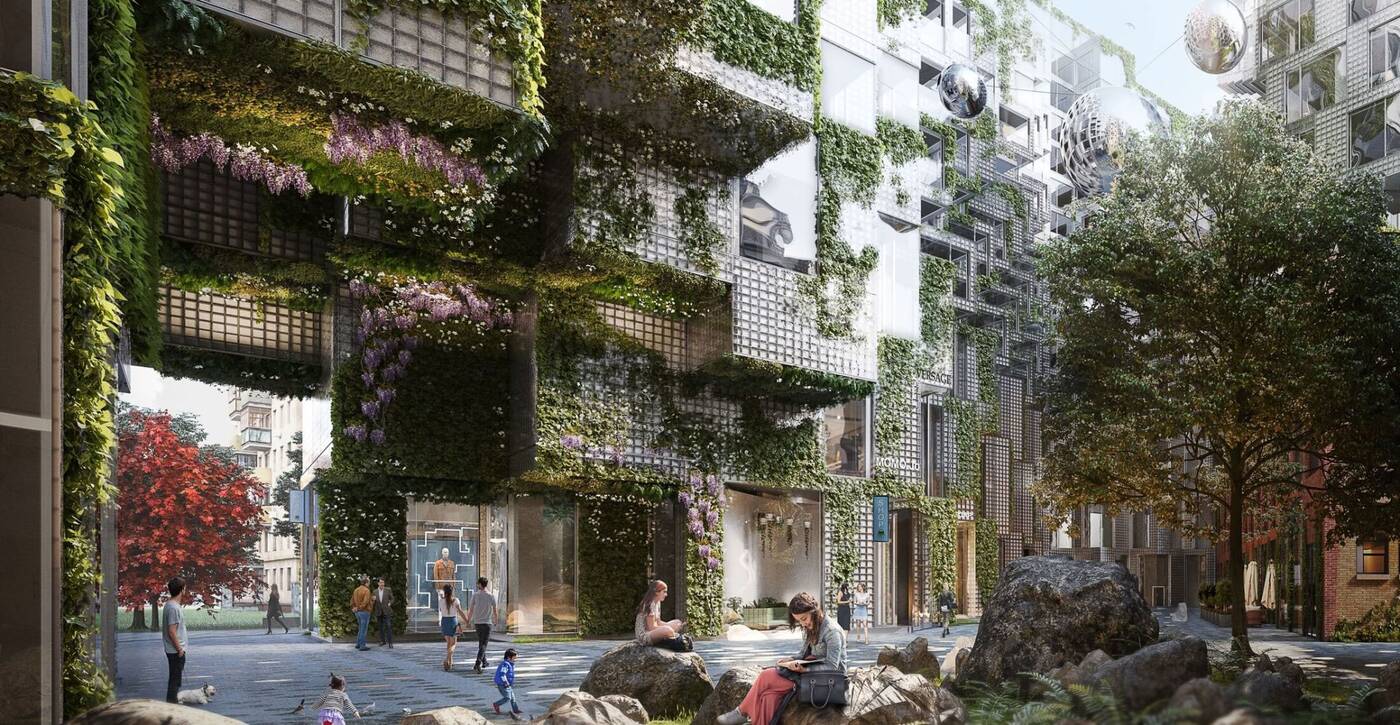 A central courtyard and new mid-block connection will allow the public to filter through the complex's base. Rendering by Bjarke Ingels Group via EllisDon.

Once complete, KING Toronto will bring 440 luxury condo units to the area, along with retail space in the preserved heritage components and gorgeous public realm additions, including a new north-south connection carved through the block.