The Art of Time Ensemble's Abbey Road tribute concert, marking The Beatles' 40th anniversary of the album's release, was a refreshing take on an old classic.

Both Saturday and Sunday night's shows at Harbourfront Centre's Enwave Theatre this weekend had sold out and it's easy to see why: A star-studded array of Canadian musicians, including Kevin Hearn, Raine Maida (of Our Lady Peace), Andy Maize (Skydiggers), Steven Page (formerly of Barenaked Ladies), Sarah Slean, John Southworth and Alejandra Ribera were performing classic songs from the album.

I'd seen Page with Art of Time Ensemble before and it wasn't much of a surprise to hear him sing The Beatles. Since I first heard Be My Yoko Ono, I've suspected he's a big Beatles fan. His heartfelt rendition of Oh! Darling was spot on, looking comfortably trim on stage in a dark, pinstripe suit, alongside Burashko at the piano.

Meanwhile, over at Massey Hall, 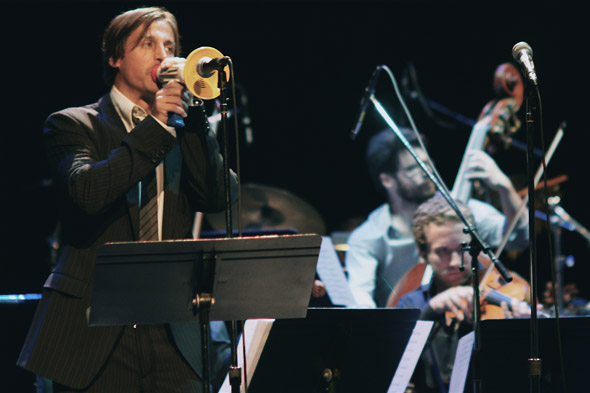 Classic Albums Live had their own note-for-note tribute to Abbey Road, proving there's plenty Beatlemania in Toronto to go around. With The Beatles' Rockband just released, along with a hefty anniversary box set, it makes sense that shows like this have such appeal.
I opted for the re-imagined, reinvented Abbey Road, featuring the talented group of musicians and arrangers, led by Art of Time Ensemble artistic director Andrew Burashko.

Come Together opened up the evening's show, featuring Maida on vocals. I found his performance rather restrained, in spite of the use of a megaphone during parts of the song. He seemed to want to rock out more (like he did recently at Virgin Music Fest) but appeared constricted by his suit and tie and held back by the 12-piece backing band that more closely resembled a chamber orchestra.

Like many singers who followed on Saturday night, Maida seemed to rely too heavily on reading the music off the music stand before him, creating a small chasm between singer and audience. Perhaps three days of rehearsals weren't enough? 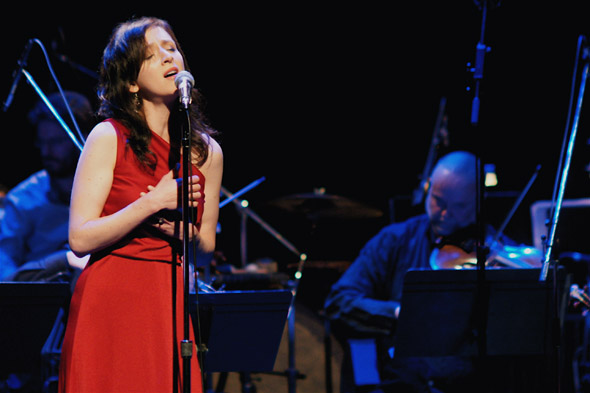 Next up was Sarah Slean, whose emotional rendition of Something was as attention-getting as her red dress. And she needed no sheet music to follow the formidable Gavin Bryars arrangement. 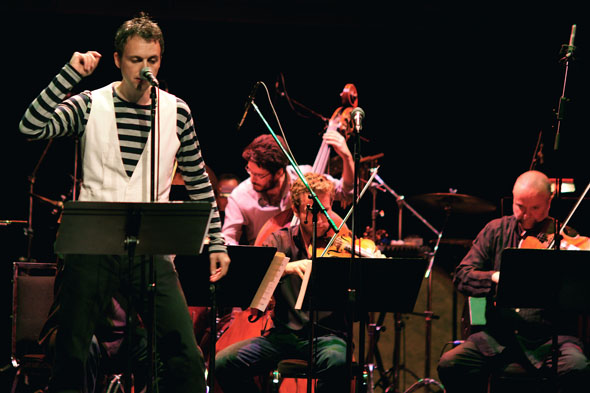 Southworth singing Maxwell's Silver Hammer was delightful. His energy, sometimes cockney accent and the sprightly arrangement by Cameron Wilson, made the song feel more like a cabaret number, with the Art of Time Ensemble even joining in on a shouted vocal line at one point. Brilliant. 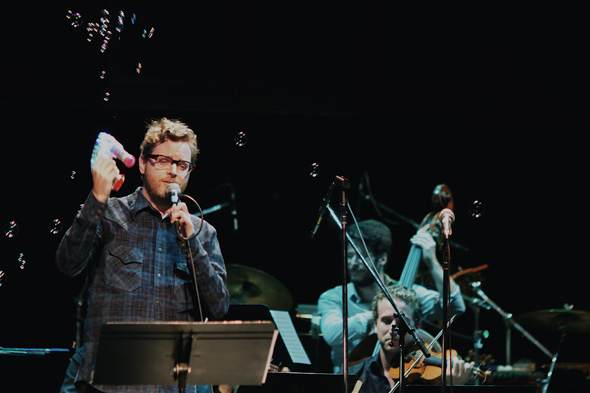 I felt that Hearn's take on Octopus's Garden lacked chutzpah, in spite of the use of props such as a bubble gun and conch shell. 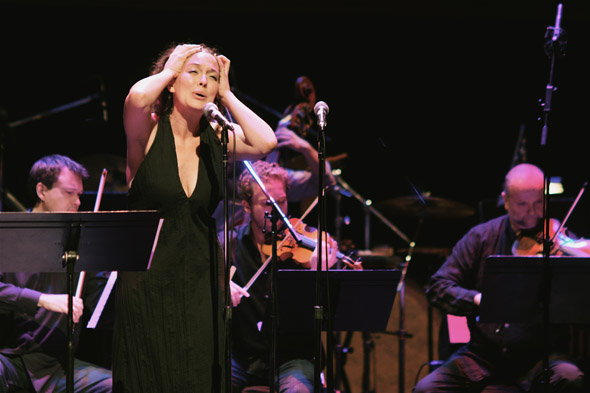 It was Ribera's I Want You (She's So Heavy) that really tore things up with her soulful, almost over-the-top interpretation. She embodied the song so completely that I thought she'd tear out her hair by the end of the piece.

The performance was helped, no doubt, by Robert Carli's adept arrangement, featuring lots of piano and percussion flourishes, a rousing sax line and complexly coordinated strings. It was easily the highlight of the show, prompting a standing ovation and curtain call.

If you haven't heard Ribera sing, she's doing a regular gig with her band at The Cameron House on Tuesday nights starting at 10 p.m. 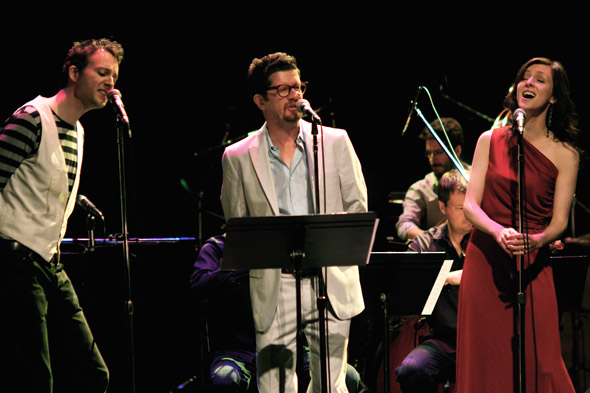 Maize took the stage after intermission with Here Comes the Sun and was joined by Slean and Southworth soon after for Because, both arranged by Jonathan Goldsmith, while the Kevin Fox arranged Sun King brought Slean back in the spotlight. 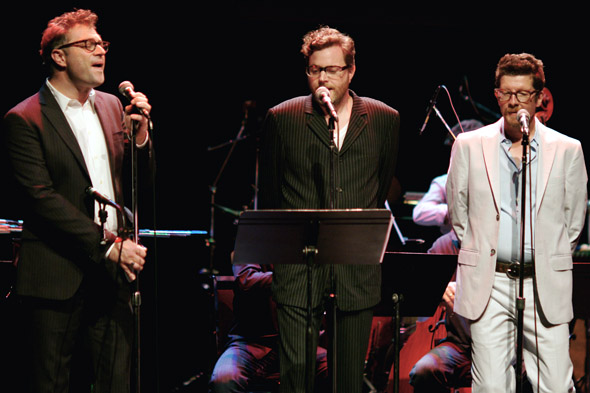 Hearn and Page shared the stage for the first time in a while for You Never Give Me Your Money, their harmonies still sounding sweet. 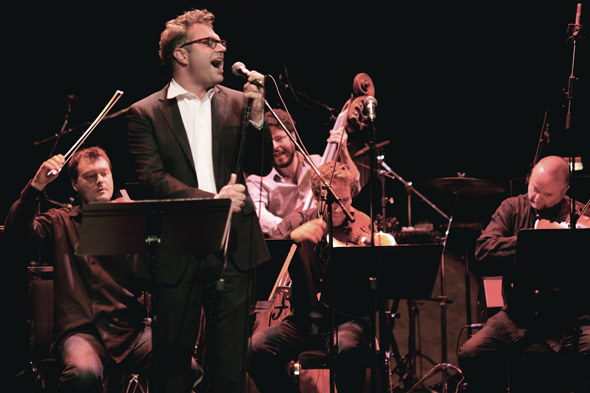 The rest of Abbey Road's revival performance featured a trio of arrangements by Dan Parr (Hearn's Mean Mr. Mustard, Southworth's Polythene Pam and Maize's She Came In Through The Bathroom Window) and Robert Carli (Page's Golden Slumbers, Hearn's Carry That Weight and Page and Maize's The End).

By the end, all six vocalists joined in the fun, making for a memorable end to a wonderful night's music. 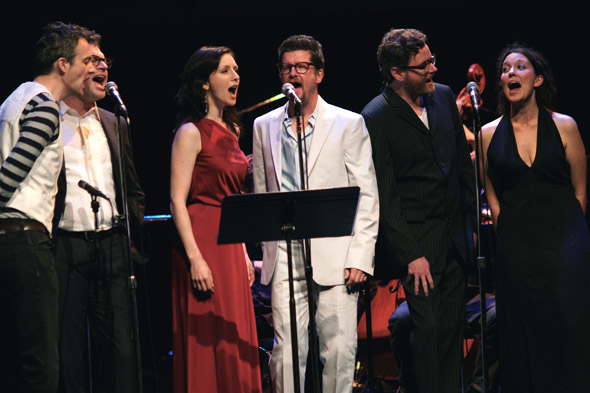 The show was recorded by the CBC for a future broadcast. I can't wait to hear it again.