Friday was a busy night at the El Mocambo. The stage upstairs hosted an amateur night for teenage musicians, while Maria Taylor wowed her own (small but respectable) crowd below.

Maria's first opener was Too Many Sisters. I rarely hear much about country bands in Toronto, but Carla MacNeil and Stephen Stanley make a great pair for the genre. I wasn't able to find out where Stanley grew up (MacNeil, singer and violinist, hails from Nova Scotia), but their song "Skyscrapers" made it clear that it wasn't in the city. Regardless, Stanley has an impressive history here: his previous band, The Lowest of the Low, was recently inducted into the Canadian Indie Music Hall of Fame. 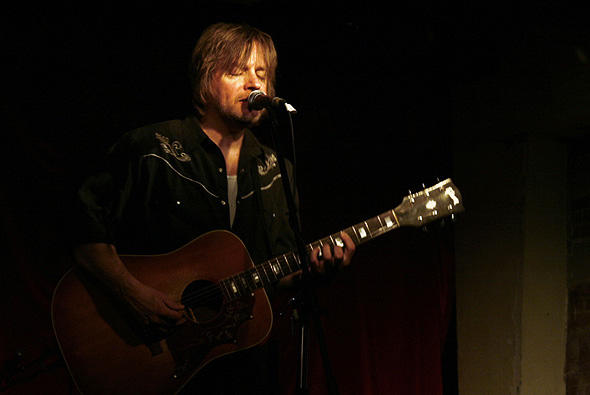 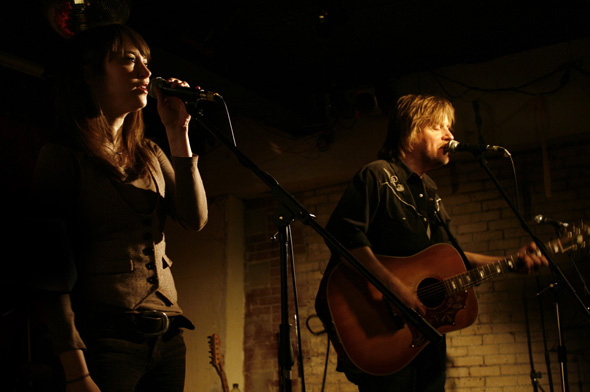 The duo put together an enjoyable set, full of folk/country (minus the southern twang). A couple tunes in, Stanley introduced a song called "The Same Old Joint", written about Graffiti's Bar and Grill on Baldwin Street. I always appreciate songs referring to Toronto, and this one in particular invoked a feeling of warm familiarity, even though I've never been to the bar myself. It was a nice break from the hustle-and-bustle description this city usually gets. I especially enjoyed their cover of Patty Griffin's "Useless Desires", which featured seamless harmonies and a beautiful bridge. They finished with "V", a charming, sleepy song that was likely written as a lullaby for a child. Too Many Sisters was a great start to the night. 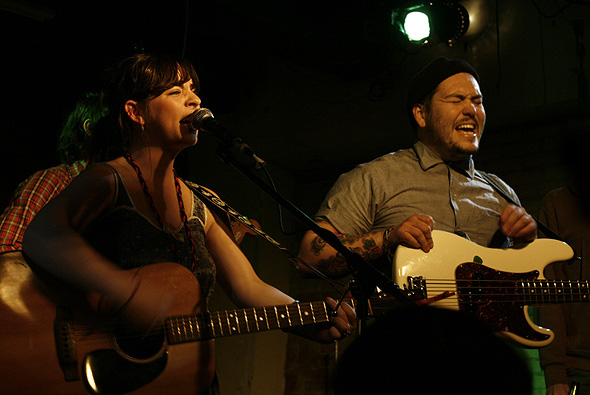 Whispertown2000 is an upbeat band from Los Angeles. When written up in the press, Rilo Kiley often gets a few mentions -- lead singer Morgan Nagler befriended Rilo's Blake Sennett, and he helped produce their debut album, Livin' In A Dream. It's very hard to categorize the band; standing in the audience, all I could think of was a cross between Dressy Bessy and The Ditty Bops. A little bit of country, a little bit of rock-driven pop. Nagler and Vanesa Corbala shared vocals, while every other instrument was often traded between members. 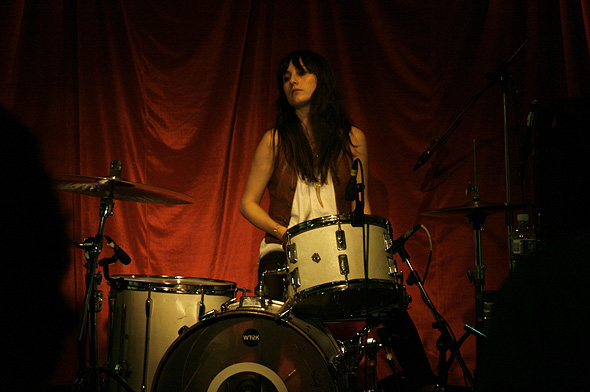 The band were extremely fun to photograph, and even just to listen to between songs; Nagler broke a string early in, and while she went offstage (returning with Stephen Stanley's guitar), Corbala and bassist Casey Wisenbaker traded banter and told jokes. While not a very well-known band, they certainly have their fans here: a group of girls in particular formed their own cheering section to my right. It didn't take long before the previously-seated crowd joined the few of us at the stage. 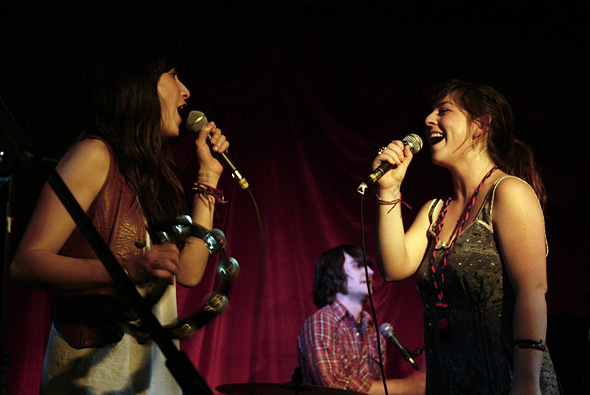 Like Too Many Sisters, the band isn't something I would normally listen to on my own, but they're definitely a band I would like to see again sometime. 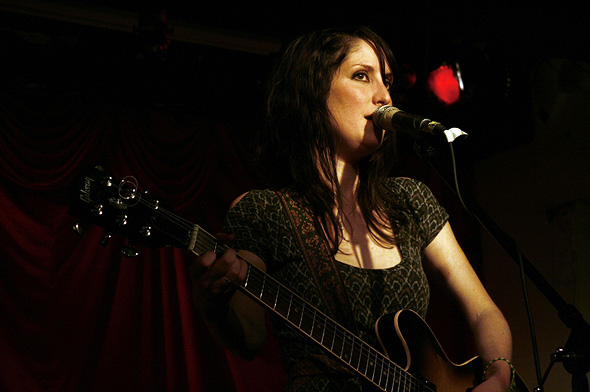 Maria Taylor has played a number of shows in Toronto over the years (including a few other dates at the Elmo), none of which I had the pleasure of attending. To be honest, seeing this show was something of a whim. I had only heard one song by Maria; "Song Beneath the Song" from her 11:11 album, which was also featured on the Grey's Anatomy soundtrack. I'm glad I went with my gut, because Maria's performance has made a fan out of me. 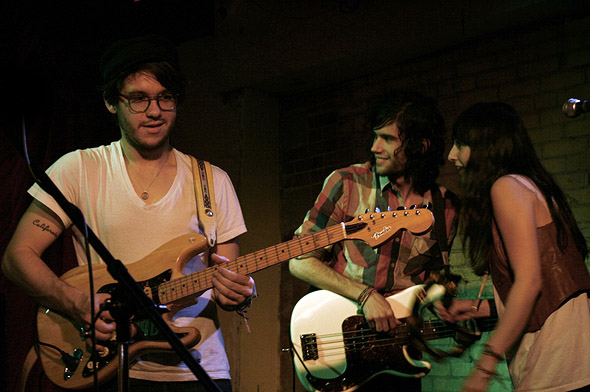 Maria has been making music for the better part of the last two decades, starting out in projects Little Red Rocket and Azure Ray. She's been associated with the ever-popular Nebraskan record label Saddle Creek for years, and has collaborated with the likes of Bright Eyes and Moby. Despite her obvious success, Taylor's name isn't thrown around often, and her audience on Friday night was rather small. However, even though I didn't know her history until I came home and Googled her name, she made it clear early on that she's been in the business for awhile. There were a few guys on the other side of the stage that, personally, I could have gone without. They sang along with the rest of Taylor's fans, but also had a bad habit of talking loudly. After the second or third song, the young men shouted praise, to which Maria replied, "What do you mean, you liked it? You were talking the whole time. If you wanna talk, go to the back!" As someone who loves live music and attends many concerts, this is something I wish more artists had the guts to say. The loud boys were light-heartedly booed by the crowd, and the concert continued. 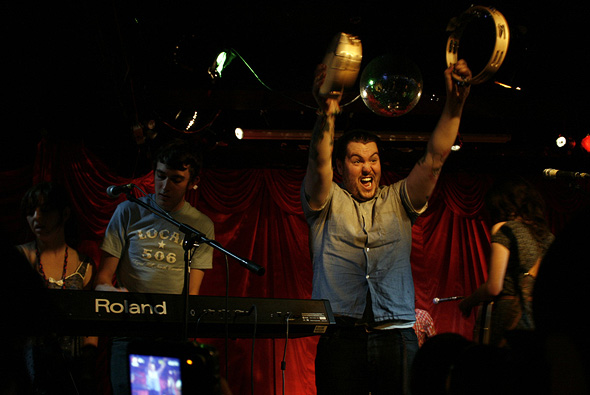 Taylor's set featured a good handful of songs from her latest full-length, LadyLuck (the title track of which she opened with). Also included were many fan-favourites, such as "Speak Easy", from 2005's 11:11. The show was a great introduction to Taylor's music, but I wrote in my notes that "Time Lapse Lifeline" and "My Favorite Love" from her latest album were especially good. Her second-last song had an amazing instrumental break, but unfortunately she never stated the title. Taylor finished with a version of "Song Beneath the Song" that featured her own band along with Whispertown2000; almost everyone in the venue was dancing and singing. It would've made a fantastic ending, but Maria was called back up for an encore and gave us three more songs: "Lighthouse", performed solo; "Leapyear" with her accompanist; and finally "Birmingham 1982" with the rest of her band.

I very highly recommend seeing Maria next time she's in town, and I think it would be a great idea to check out her new album too.