Crowne Plaza Toronto Airport is currently open but their offerings and services may be affected due to the pandemic. Please contact the business directly for more information about any changes. Is this your business? Please contact us if you would like to update this message.

The Crowne Plaza Toronto Airport offers pretty much everything you could want in an airport hotel and perhaps a bit more. As is is true of the surrounding hotels, the area in which the hotel is located is anything but pretty: fast food joints, parking lots, and the regular sound of planes soaring over head are all part of the mix. Throw in the fact there's not a whole lot of entertainment to be found around the airport (aside from plane spotting ), and it starts to become extremely important that the hotel of one's choice functions as something of a sanctuary, a place that it isn't really necessary to leave unless one intends to explore the city proper. 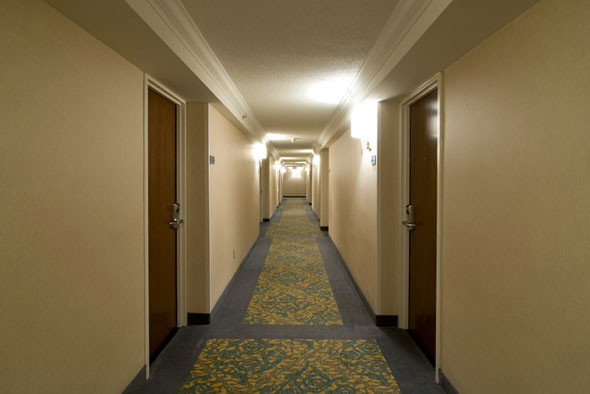 This is precisely what the Crowne Plaza Toronto Airport offers. It's a full-service hotel with all the amenities one would expect: fitness and business centres, a restaurant and cocktail lounge, 6 a.m. to 1 a.m. room service, free Wi-Fi, a gift shop, an airport shuttle and concierge services. 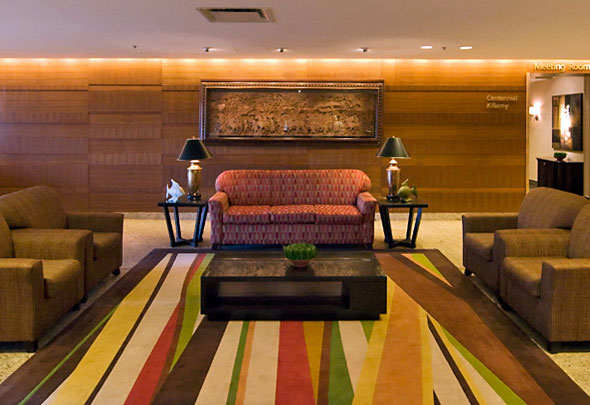 When my companion and I check in on a particularly blustery night, we're happy to know that we'll be able to confine ourselves to exploring the hotel and not the surrounding area. And besides, this is one of the best features of large hotels anyway -- the fact they're self-contained little cities with plenty to do within their walls. 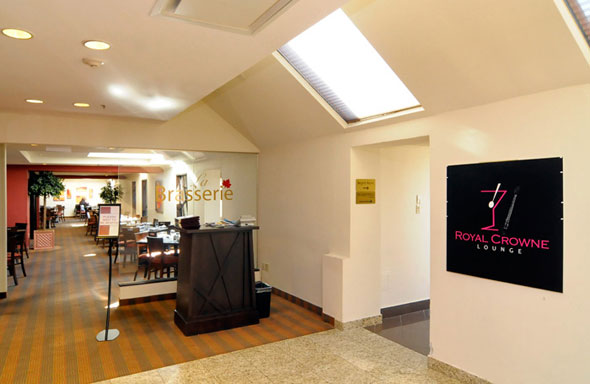 Rooms at the Crowne Plaza Airport are well-equipped, clean and modern (the product of a 2008 renovation). And though you won't mistake a visit here with a stay in the lap of luxury, there's not much left to be desired. 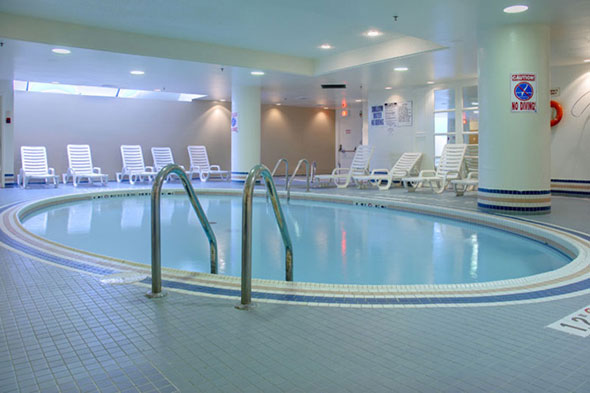 Two minor criticisms should, however, be noted. Given that television can provide considerable comfort to the lonely traveller, it'd be nice if the reception on these things was a bit better. There is, of course, full cable -- but with contemporary flat screen TVs, some feeds can produce a shoddy image. I don't expect HD, but watching a hockey game, I was left annoyed with the obvious pixelation. 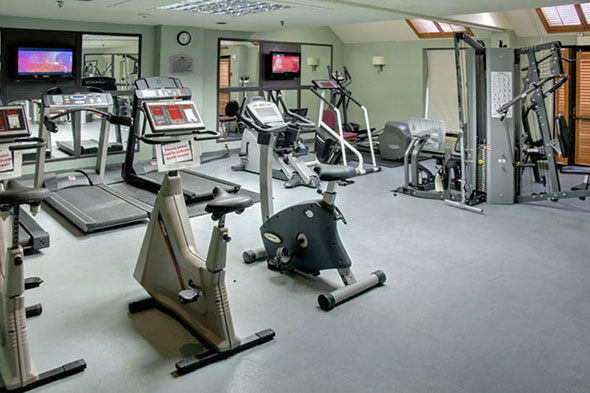 Perhaps more significant is the sound of planes taking off overhead. This was an issue every 20 minutes or so up until around 8:30 p.m. when it stopped altogether. Among the courtesy items provided in the room -- robes, lavender room spray, water bottles, etc. -- a complimentary "nighttime" CD and earplugs are included. Based on my evening in the room, I expected that I'd have to play this overnight, but it wasn't necessary. I didn't notice them taking off in the morning either, so it seems like it's just the late afternoon that ones needs to worry about. 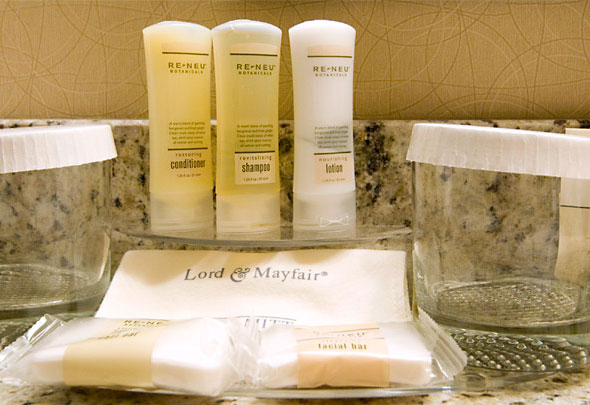 Service is friendly and respectful, if not overly pampering, which is how I like it. Few things bother me more than being disturbed by hotel staff posturing as helpful.

The check-in staff had me in my room within minutes without any difficulty, room service was prompt, and we were offered extra bottles of water with a quiet knock on the door at around 7 p.m. (we didn't have the "so not disturb" sign on).

As should be the case, there is 24 hour complimentary shuttle service to the airport.

Although checkout is noon, we lazily sauntered out at 12:45 p.m. without disturbance. As far as one-night stays go, it was an uneventful one.

Contrary to what I thought, the majority of those who stay at the Crowne Plaza Toronto Airport are not held up as a result of flight delays or early morning fliers. With ample event facilities, the bulk of those who visit the hotel are in town on business taking place at one of the numerous on-site banquet and meeting rooms.

Perhaps surprisingly -- at least to downtown dwellers -- I'm told by the concierge that a hefty chunk of business also comes from Torontonians (or GTA residents, as the case may be) looking to enjoy a night away from home. And the truth of the matter is that the rooms are nice enough to justify such an indulgence.

This isn't a particularly young place, but I don't get the sense that it subs in as a seniors residence either. 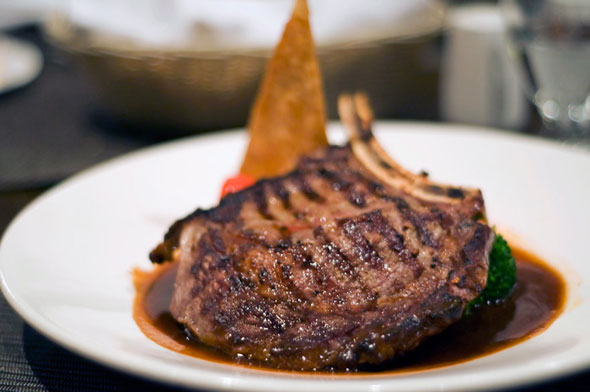 Although I make it habit to resist dining at hotel restaurants on my various travels, the crappy weather enticed me to try to "La Brasserie." There wasn't much action in the dining room at the hour we ate -- 9:30 p.m. -- but the food was impressive. My steak came to the table medium rare (as ordered), offered adequate exterior char and was far juicer than its 3/4 inch thickness would have one expecting. My companion's linguine primavera was chock full of fresh vegetables and garlicky goodness, making it one of the best versions of the dish she's had.

Similarly, the room service we ordered earlier was a hit. Just an order of bruschetta and French onion soup, it was nevertheless a excellent little snack.

Like the room, the food isn't quite five star -- but the prices won't kill you and the dishes are all competently prepared, if nothing that will really spark your culinary imagination. Overall, we were quite happy with our meal, and would recommend it as an option for those who don't feel like exploring the surrounding area. 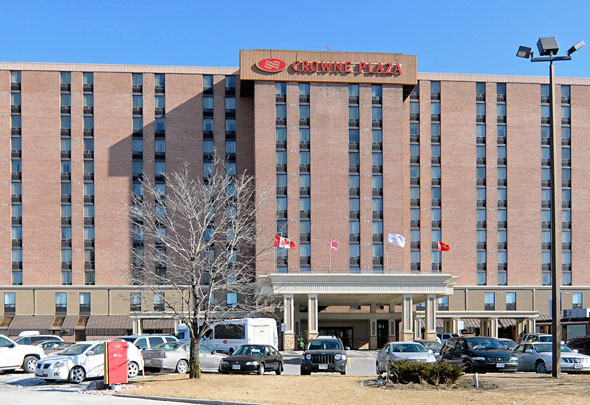 The Royal Crowne Lounge is a relatively new addition to the hotel, and features live music and entertainment. We stopped in for a quick drink, and although it wasn't particularly busy when we passed through, the music was lively and upbeat. With the closing of the Valhalla Inn last year, the Crowne hopes to take over as the entertainment attraction in the area. The room's got plenty of potential, and people around the airport need stuff to do too, so I wouldn't be surprised if the lounge does pretty well.