Monte Clark Gallery has a reputation as one of Canada's top commercial galleries. Located in the Distillery District , it represents only contemporary artists and is home to some big West Coast names like Douglas Coupland, Roy Arden, and Scott McFarland.

Monte Clark Toronto opened at Queen & Augusta in 2001, and moved to the then-burgeoning Distillery District in 2003. In 2009, the gallery officially became a partnership between Clark and Daniel Faria, who had worked together for some time. For a couple of years the gallery became known as Clark & Faria before it reverted to its original name after Faria opened his own gallery in late 2011.

I visited on a rainy Tuesday and once again marveled at the stately space. The Distillery Historic District is known for its special architectural flavour, which Monte Clark has in spades. Despite the modest square footage of exhibition space, the gallery maintains a grand feel with high ceilings, rough-elegant brick walls, and a massive boiler in the stairwell, left over from the building's former life.

Though architecturally interesting (a nice change from the common white cube), these features do not compete with the artwork. Sober pale grey walls have been erected inside, forming three distinct rooms: the front gallery, main gallery, and lower gallery. Although these spaces have sometimes housed different works individually, when I visited the entire gallery was devoted to the conceptual landscape photography of Scott McFarland .

McFarland, an established Vancouver photographer, who was featured at the National Gallery of Canada in 2008, is a good example of Monte Clark's roster. Of their 24 artists, about half work in photography or film, and most are Canadian. Some could be considered emerging, and others have star power. The range in prices of work reflects this: as low as $850, and as high as $50,000. 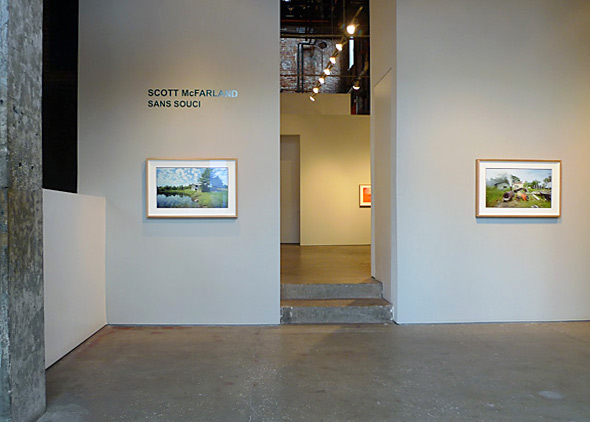 The aforementioned book was spangled with the red-dot sale markers-- clearly, collectors are aware of Monte Clark Gallery, probably owing to the name the gallery has made for itself, both in Vancouver and in Toronto. So it doesn't matter too much that the Distillery is slightly off of the average Torontonian's radar at times; the buyers still come, happy that they can park easily, and visitors to Toronto often spend time in the Distillery. The gallery's exposure is also bolstered by its participation in international fairs like the Armory show in New York.

As I was talking to Jane Hutchison, who works at the gallery, a loud alarm began to ring-- it turned out to be the building maintenance team doing some testing. "Welcome to the Distillery," she jokes. While the building's age hasn't presented specific problems at Monte Clark Gallery, the district is shifting. Hutchison remembers the Distillery's earlier vision of being a gallery-oriented district. The past year or two, several galleries in the neighbourhood either closed up shop or moved away, including Artcore, one of the most cavernous commercial galleries I had ever visited. 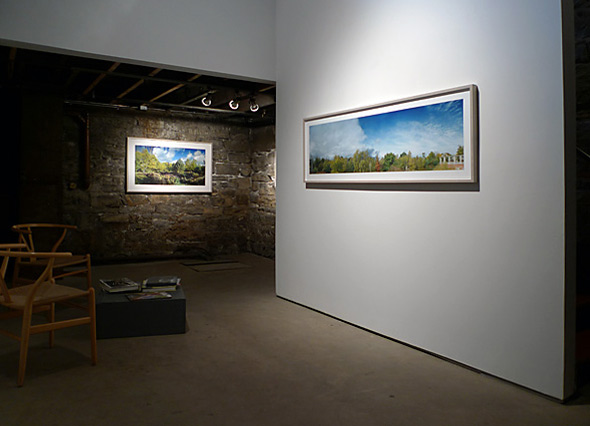 Now, though several galleries remain (most notably Jane Corkin), the district's focus seems to be on evening entertainment, weddings, fine dining, and live events. "The Distillery is still trying to figure out what it wants to be," she muses. And though it is out of the way, Hutchison believes that the eastern waterfront development and the changes at Regent Park will add different kinds of foot traffic to the area. "Give it five to ten years," she predicts. My own prediction: Monte Clark, along with Corkin Gallery and Thompson Landry, will continue to anchor the Distillery's visual art scene, through those years to come.

Monte Clark Gallery is open Tuesday through Saturday 10am to 6pm, and Sunday 12pm to 5:30pm. They're located at 4 Trinity Street-- right across from Balzac's Coffee . 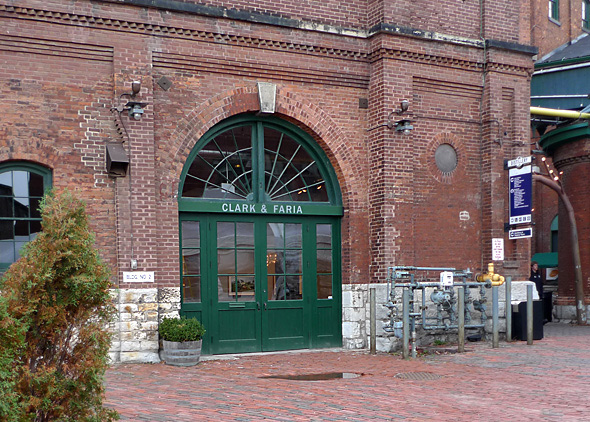 Writing and photography by Elena Potter.

Editor's Note: This post was updated on February 18, 2012 to reflect the name change from Clark & Faria back to Monte Clark Gallery.