Sport Gallery used to be on an upper floor in a building in the Distillery district, and display mostly prints and photos related to sports and the venerable Sport magazine. They're still in the Distillery, but now in a ground floor space with way more of a focus on memorabilia- and vintage-inspired apparel, books, a coffee bar, and other goodies for sports fans.

Cayleigh Parrish owns the company her dad, Wayne Parrish, started when he acquired the archives of Sport, a magazine that was launched way back in 1946. Everything in the store is inspired by the pages of this classic magazine. 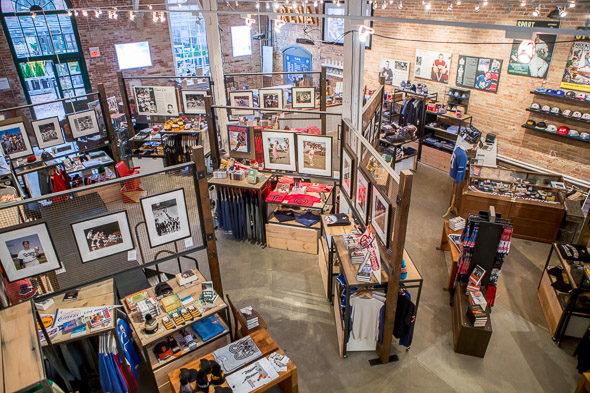 The store is large and has an upstairs area and a stage where they can set up a screen to project films and have talks. The almost batting-cage like display racks that tower over everything and divide up the room actually all pivot 180 degrees. 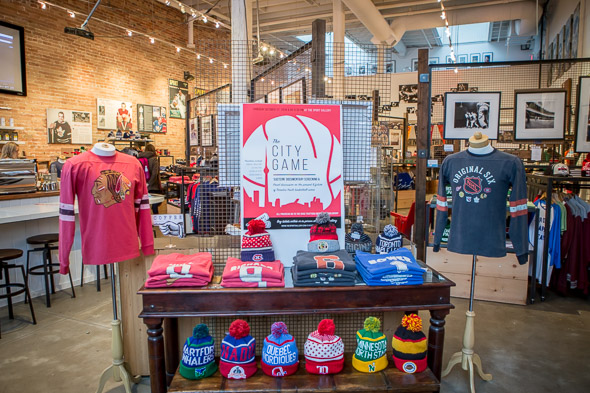 As such, they're heavily invested in the historical presentation of the sports world, going so far as to divide the sections in their store by era, from the 1800s all the way up to the 2000s. 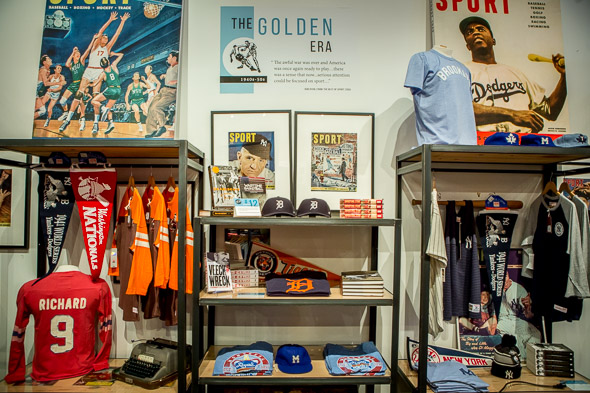 Everything in each section is coordinated to go with that era, like a Montreal Royals ball cap ($65) made by Ebbets Field to match the exact standards of the original. 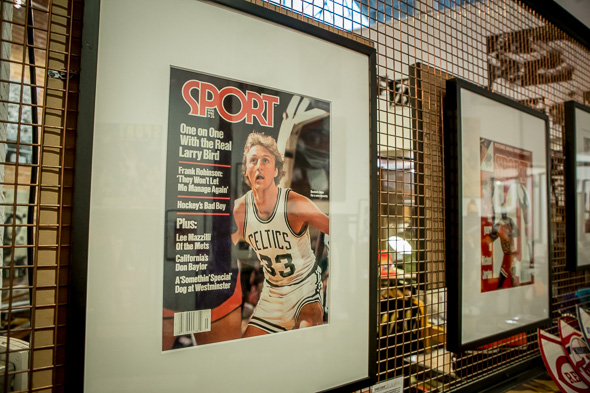 They sell prints of the covers of Sport, the smallest being about $75 to much larger wall hangers that create a giant statement going for up to $795. 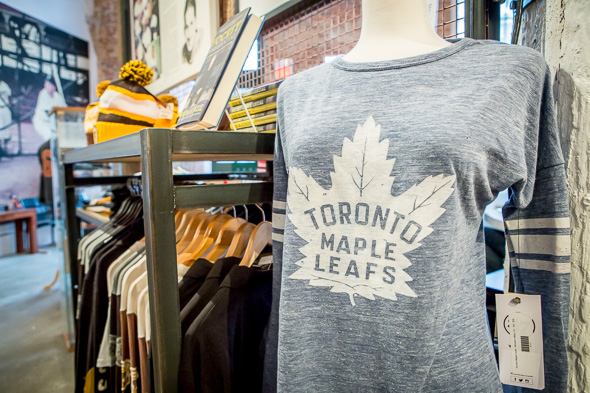 They do some more feminine apparel so you can rock vintage sports logos of your favourite teams without having to give up your cute sense of style and dress in a boxy jersey in this light long-sleeved Leafs tee ($58). 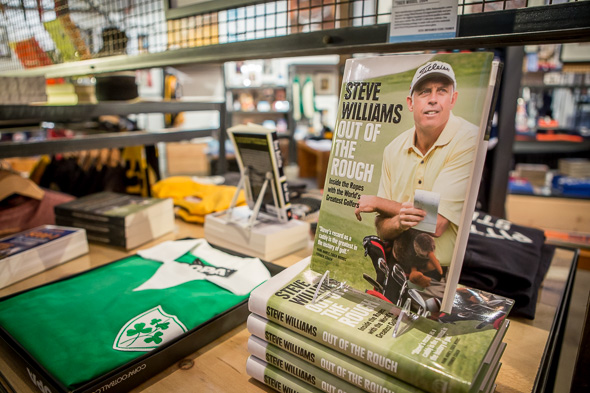 They have a curated collection of sports books that come straight from the top 100 sports books according to Sports Illustrated. Out of the Rough by Steve Williams was penned by one of the world's greatest golf caddies, and there are also novels on the list like End Zone by Don DeLillo ($21). 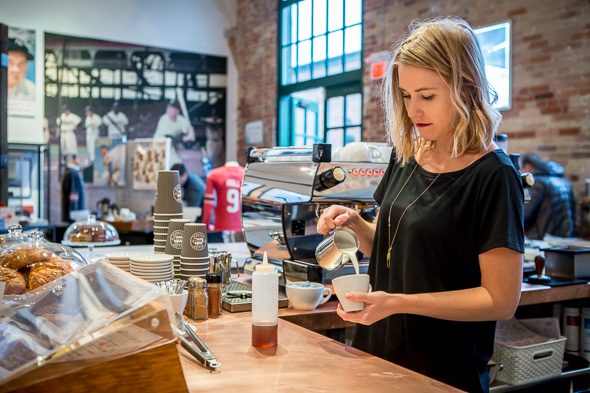 At the Arena Coffee Bar (the Leafs were actually originally called the Arenas), they use exclusively Pilot coffee and all specialty drinks are sports themed. 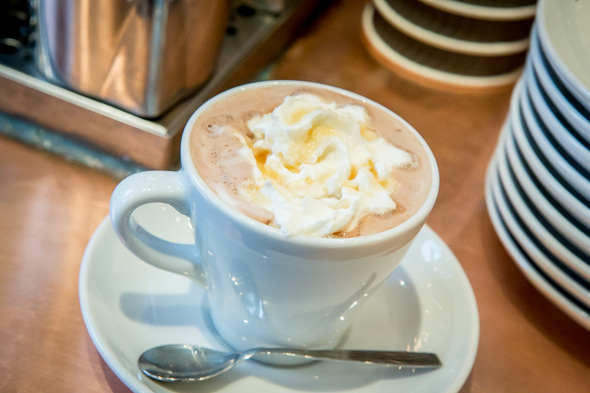 The King Clancy (specialty coffee prices aren't listed, but run about $3.75 - $5.50) is named for a Maple Leafs player who apparently had a big personality, hot chocolate with maple syrup for a Maple Leaf and a crown of whipped cream. 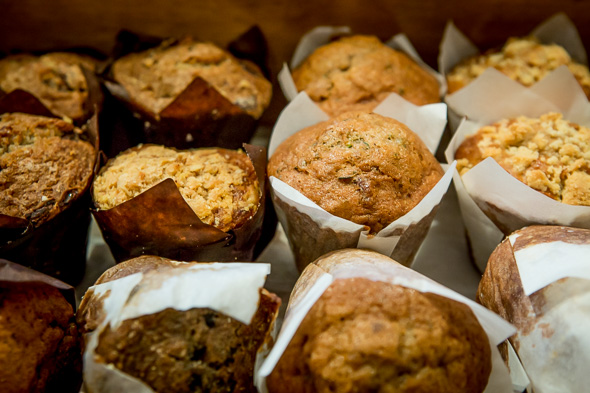 They also sell baked goods from Circles and Squares , like muffins ($2.95) ranging from zucchini walnut to raspberry crumble to pumpkin pepita. 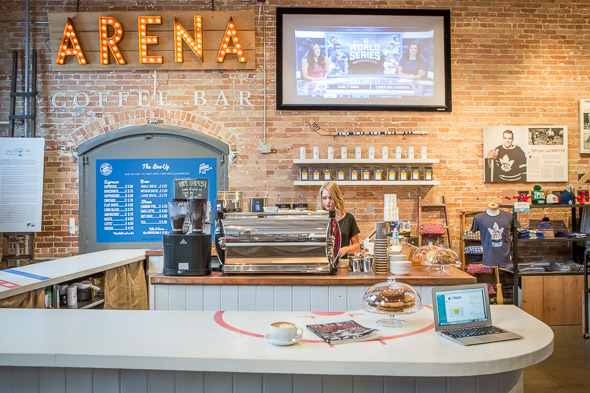 The aim with Arena Coffee Bar was to add a space to Sport Gallery that reinvented the sports bar as a coffee bar, with a large TV up on the wall broadcasting sports. 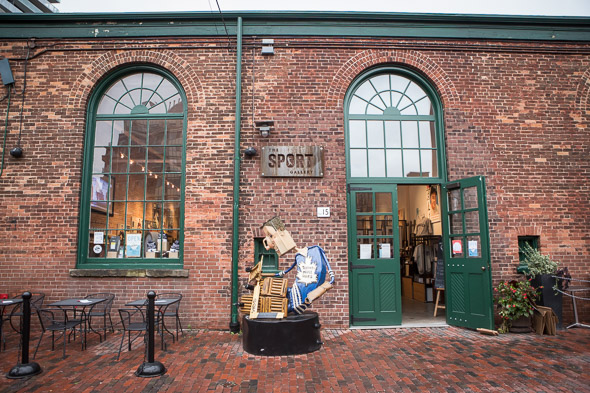