Halloween in Toronto was pretty much cancelled for 2020, but that didn't stop the spooky season costumes from popping up on our social media feeds. Options were limited this year, since most of us (but not all) stayed at home. Still, execution was key for these DIY 'fits.

Here's a roundup of some of the best Halloween costumes in Toronto in 2020.

Among Us video game

Toronto special effects makeup artist Megan Fraser had a few killer looks this Halloween (the human ouija board was a personal favourite), but the most relevant was inspired by Among Us: the lockdown-loved multiplayer video game, seen in the photo above.

A bike crew rolled through the streets of Toronto on Halloween dressed as characters for the arcade classic Pac-Man, cherry fruit bonus and multi-coloured ghosts not excluded.

Chicago has the Smashing Pumpkins, but Toronto has the Dancing Pumpkins. Local band Crash Adams hit Yonge and Dundas and inside the Eaton Centre over the weekend dressed in suits and pumpkins. Sure, the get-up was fairly simple, but it took conviction.

CN Tower as a pumpkin

If you were, like me, sitting at home on Hallow's Eve pondering when the heck this pandemic will end, a glimpse of the CN Tower "dressed" as a pumpkin might have put you in a better mood.

A Toronto dog owner dressed her pup as the most adorable shawarma ever. Jamaican patties aside, shawarmas might be one of the most quintessential Toronto takeout foods ever, so this outfit is definitely on-brand.

This jaw-dropping look comes courtesy of local costume shop Malabar and Toronto makeup artist Julio Silveria, who used some epic distortion techniques, a bald cap, and a whole lot of attention to detail. 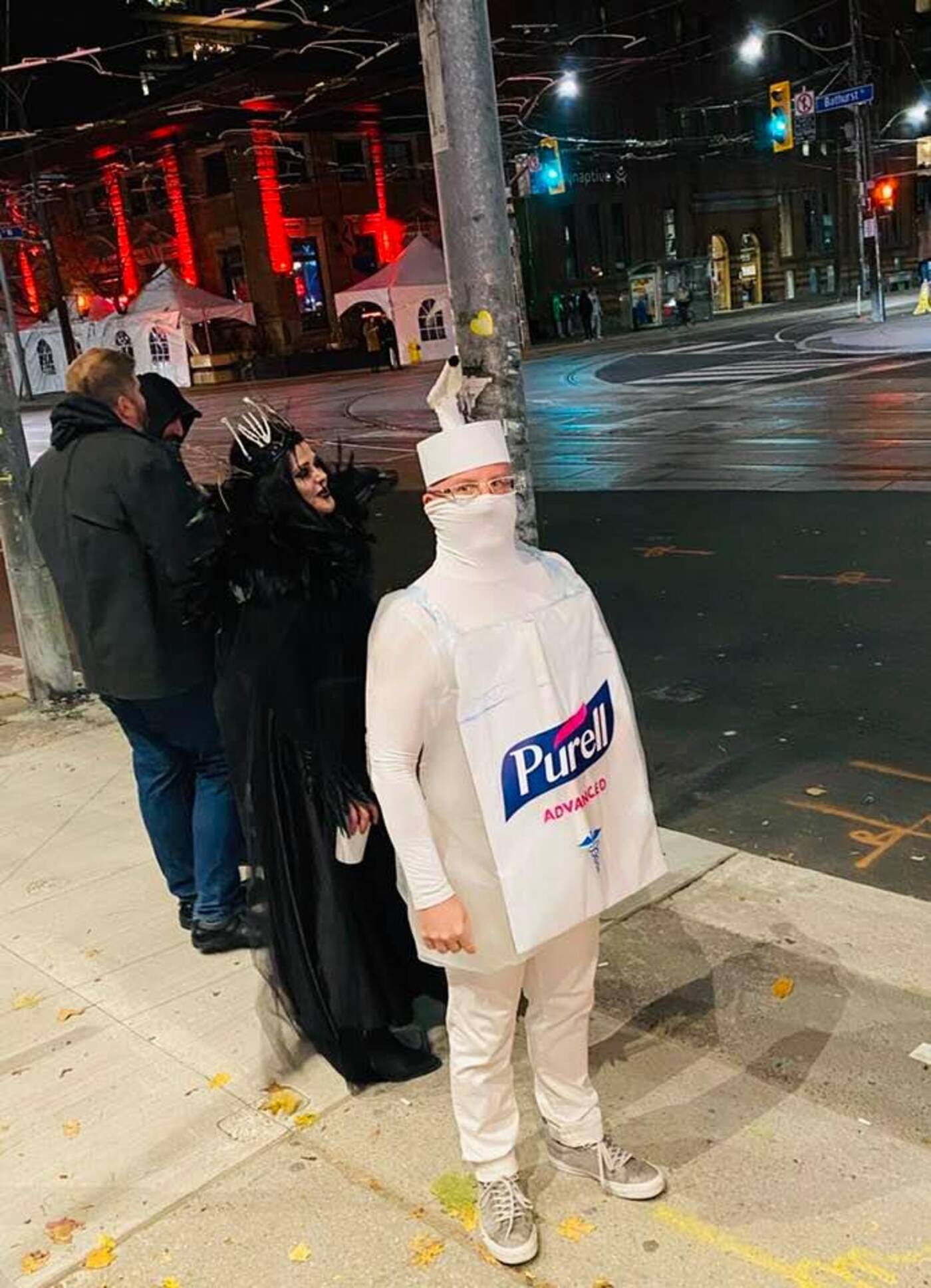 Someone dressed up as this year's hottest item: hand sanitizer. Photo by Giorgi Nikoladze.

Captured at the intersection of King and Bathurst was this costume that really needs very little introduction or explanation. The branding was perfectly on point. Extra points for the pump and built-in face covering.

As usual, Toronto drag queen Scarlett Bobo went all out with her costume. This year's spooky look was Malificent, where she absolutely nailed the horned look and the contour to boot.

This year, rather than building my usual urban cosplay costume, I made four Toronto Instagram filters to celebrate Halloween and some of the city's arts institutions while physically distancing.

Rob Shostak, who has won pretty much every Halloween ever with his Toronto-themed costumes, decided to keep it virtual and distanced this year by creating four Halloween filters that transform users into Toronto landmarks like the AGO.