The piece was created by Fong in tandem with the Alleles, the winners of the Design Exchange's recent Emerging Designer competition, who specialize in intricate covers for leg prosthetics. Fong was a judge for the competition; after seeing their work, he invited them to make a piece for his upcoming show.

"It's actually quite part of the collection -- moreso than just, 'let's use your thing, and try to make it work,'" Fong told me in advance of the show last week. "Any other season, I don't think it would have worked."

For the duo behind the Alleles, McCauley Wanner and Ryan Palibroda, Fong's invitation to collaborate was a welcome seal of approval from the fashion world.

"Our whole angle and our whole drive behind it is, it's a fashion piece. It's not like another piece of medical equipment," Palibroda told me over the phone from Medicine Hat, Alta., where the duo is based.

They launched their business in October, selling a line of lightweight plastic covers (also known as fairings) that clip onto a wearer's existing prosthesis; while they mimic the natural form of a leg, they're carved with cutouts that resemble grids, honeycombs and fractals.

The Alleles began as Wanner's thesis project at the University of Calgary, as an exploration of functional fashion. She hit early resistance from program administrators:
"Supervisors were like, 'You're pairing something so frivolous with something so sensitive -- you're going to get laughed at,'" Wanner says.

"At the same time, the idea to give people options and choice," says Palibroda. "Now that it's out there, it's obvious. People are like 'How come no one's done this before?'"

So far, the business has been a success, partially spurred on by the relatively low pricing of the fairings, since the few other companies that make similar pieces often charge thousands of dollars. (The pieces currently available range from $350 models to a $799 version covered in dangling pearl beads.)

"It has this weird butterfly effect where it's a lot bigger of a thing than looking good. It makes people feel better about themselves, less self-conscious," Palibroda says. "We have a lot of people that are wearing shorts again, which is kind of amazing."

For the VAWK show, the Alleles and Fong collaborated over several weeks, sending images and ideas back and forth between Medicine Hat and Toronto; likes all their pieces, the Alleles manufactured the final prosthesis themselves in their studio. The duo says Fong understood their aesthetic and aims from the start.

"The way he's looking at this is so sophisticated," Wanner says. "It's kind of cool hearing him talk about our work. He was like, 'I like how your stuff -- you don't really notice it's there. It's just like the leg is kind of carved away a little bit and embellished.'"

"He really liked the subtlety of it," Palibroda adds. "It's one of the things where you could miss it if you weren't paying attention. That's kind of the point behind the whole thing. It's not for shock value. It's not to gain attention."

"And it's not to camouflage, either," Wanner says. "It's sort of, like, a piece of jewelry. An accessory."

No doubt, the Alleles' creation will net a few comparisons to the carved-wood boot prosthetics model Aimee Mullins famously wore in an Alexander McQueen show in 1998. For Fong, who's sent models of different ages and body types down the runway in previous seasons, it's less about stunt casting or shock value, and more about extending the fashion industry's narrow concept of "diversity".

"In the modelling world, diversity's always been cultural-based," says Fong, who became acclimatized to dressing women with different body types during his stint on Project Runway. "It just makes me think 'Why don't we show that more? Have our product be more relatable to the consumer, but still desirable. Still fantasy, but in part still reality."

Finding a model, Fong says, was actually tougher than actually getting the piece made. (The Alleles' usual female model, Michelle Salt, was busy competing at the Paralympics in Sochi.) But the Alleles and Fong eventually invited Palmiero Winters, an accomplished athlete and public speaker who lost her left leg below the knee in a motorcycle accident, to walk in the show. 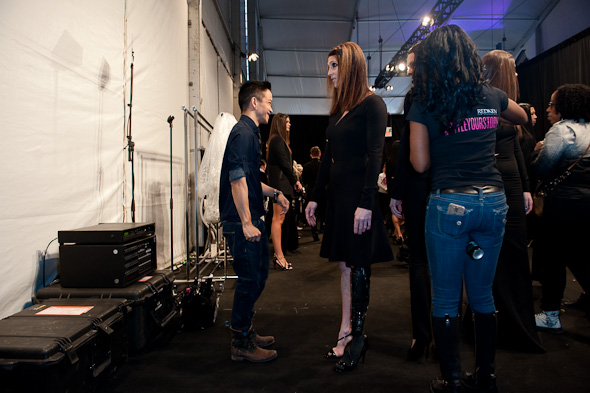 Backstage before the show, Palmiero Winters said she was "honoured" to be involved; as the director of a foundation for kids with prosthetic limbs, she says this is the opportunity she's been waiting for to show the children she works with that they can be a part of the fashion world.

"We've seen a shift, a very large shift, over the last few years, as far as how people see prosthetics. A long time ago, it was something that wasn't put out in the open. It was very discreet. Now, it's more of bringing it to the front, the aspect of being confident in who you are," she said.

"It takes an absolute pioneer, and someone of the utmost confidence, to take those people who are different and put them out there, especially in the fashion world. I have so much respect for Sunny and McCauley and Ryan to take that first step to allow someone who is different -- visibly -- to be out there with everybody else."

Top photo via anyageo on Instagram. Backstage photo by by Mauricio Calero.