Located at 57 Adelaide Street East, the building that was once known as the city's Third Court is a short distance west of Church Street, not far from St. Lawrence Market.

When the court house was built, it was in the commercial and residential heart of the city. The impressive pre-confederation structure delivered justice to the residents of Toronto from 1852 until 1900. However, there were two other courthouses that preceded the one on Adelaide Street East.

Toronto’s (York’s) first court house was commissioned by Governor Simcoe, shortly after he arrived in the colonial settlement in July 1793.

Though after the War of 1812, much of the town of York remained severely damaged due to the American invasion. The government made the home of Alexander Montgomery, located on Richmond Street East (between today’s Victoria and Yonge Street), their new court house. 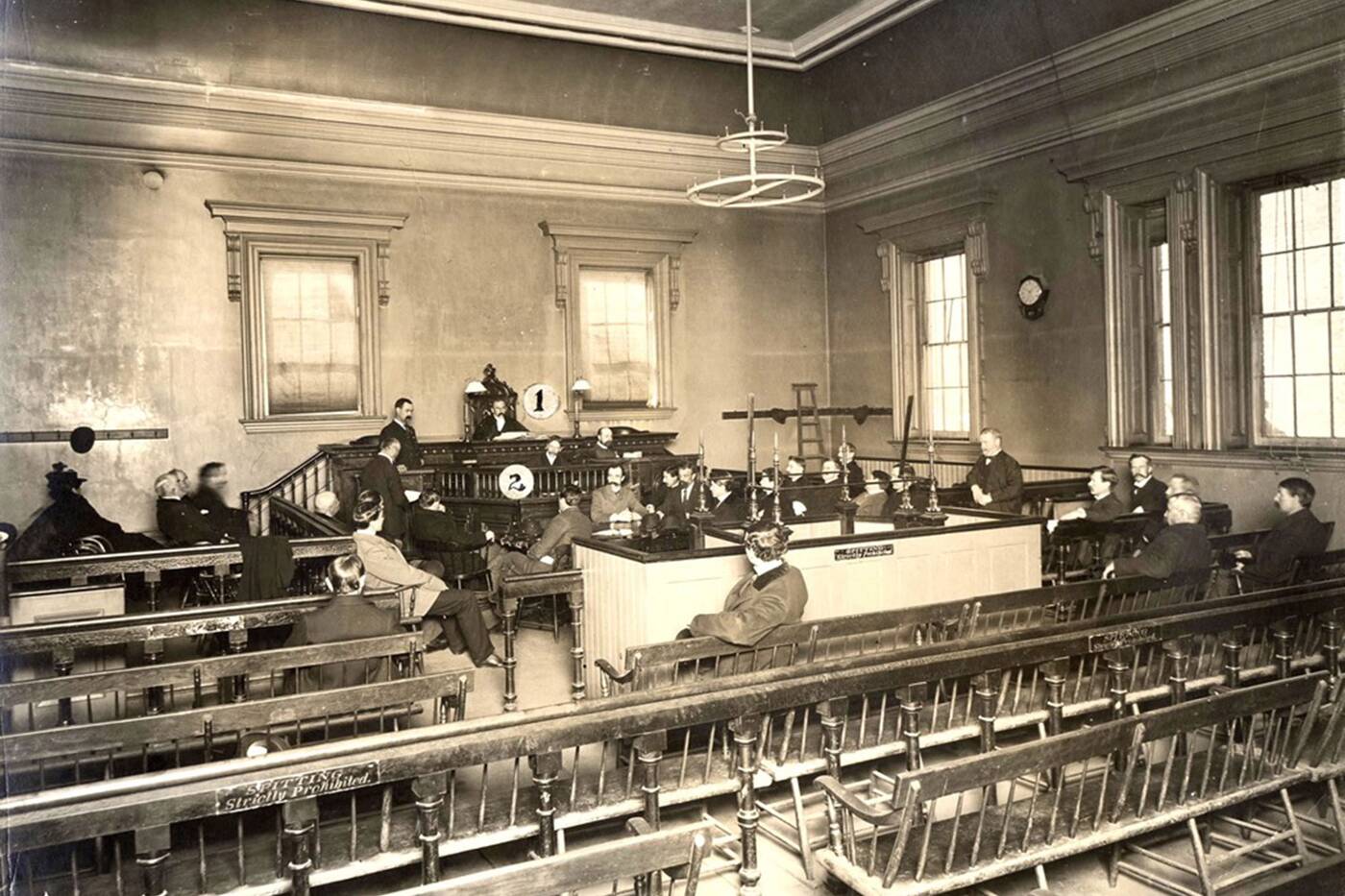 The York County Court House in 1899, when the court was in session. Photo by Toronto Public Library

As the town of York continued to grow, it was evident that a larger court house was necessary. John Hayden was the contractor for the new larger building, which cost the government about 1,800 pounds.

Named the “Court House Square,” the structure remained a courthouse from 1827 until 1852.

By the 1850s, the third courthouse was born. Today, it has survived into the modern era as one of the few remaining structures from the city’s pre-Confederation period.

It served the county of York from 1852 until 1900, when the courts were relocated to the new City Hall (now referred to as the Old City Hall), located at the head of Bay Street, at Queen Street West.

The contract for the architectural plans was given to Cumberland and Ridout, the same firm that designed St. James Anglican Cathedral at King Street East and Church Street. 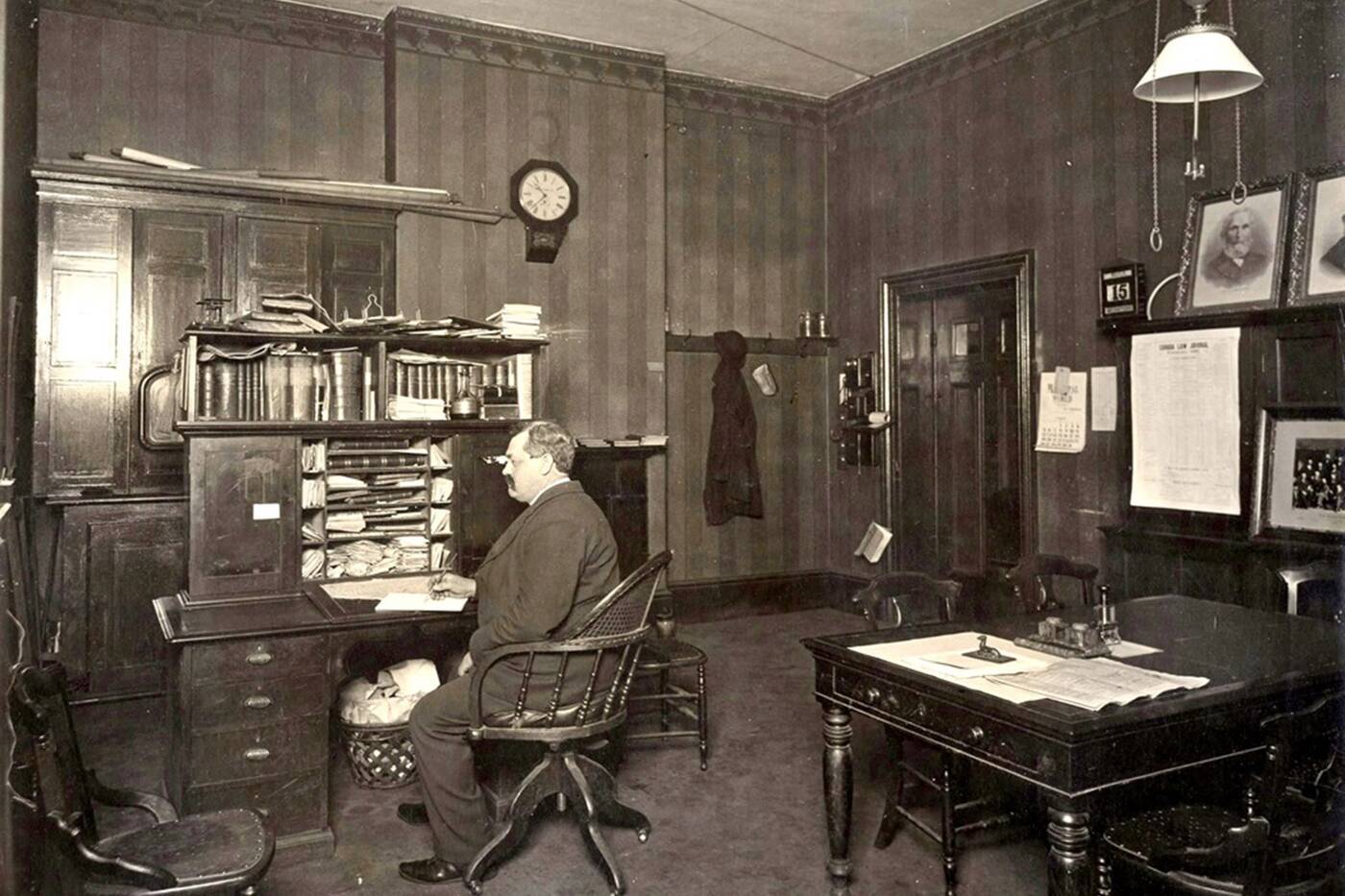 An office in the courthouse in 1899. Photo via Toronto Public Library.

The three-storey York County Court House of 1852 was constructed of white bricks and stone, although today its facades appear darkened by the passage of time. Eric Arthur in his book No Mean City described the Greek-influenced front of the building as "austere, heavy and forbidding."

This may be true, but having last visited its interior in April of 2019, I can attest to the fact that it is grand and spacious as befits a building of such prominence.

Its north facade on Adelaide St. East has four impressive pilasters, two on each side of the entrance. As well as housing the courtroom, the structure contained the offices of the county treasurer, the clerk of the council, the division court, the clerk of the peace and the sheriff. 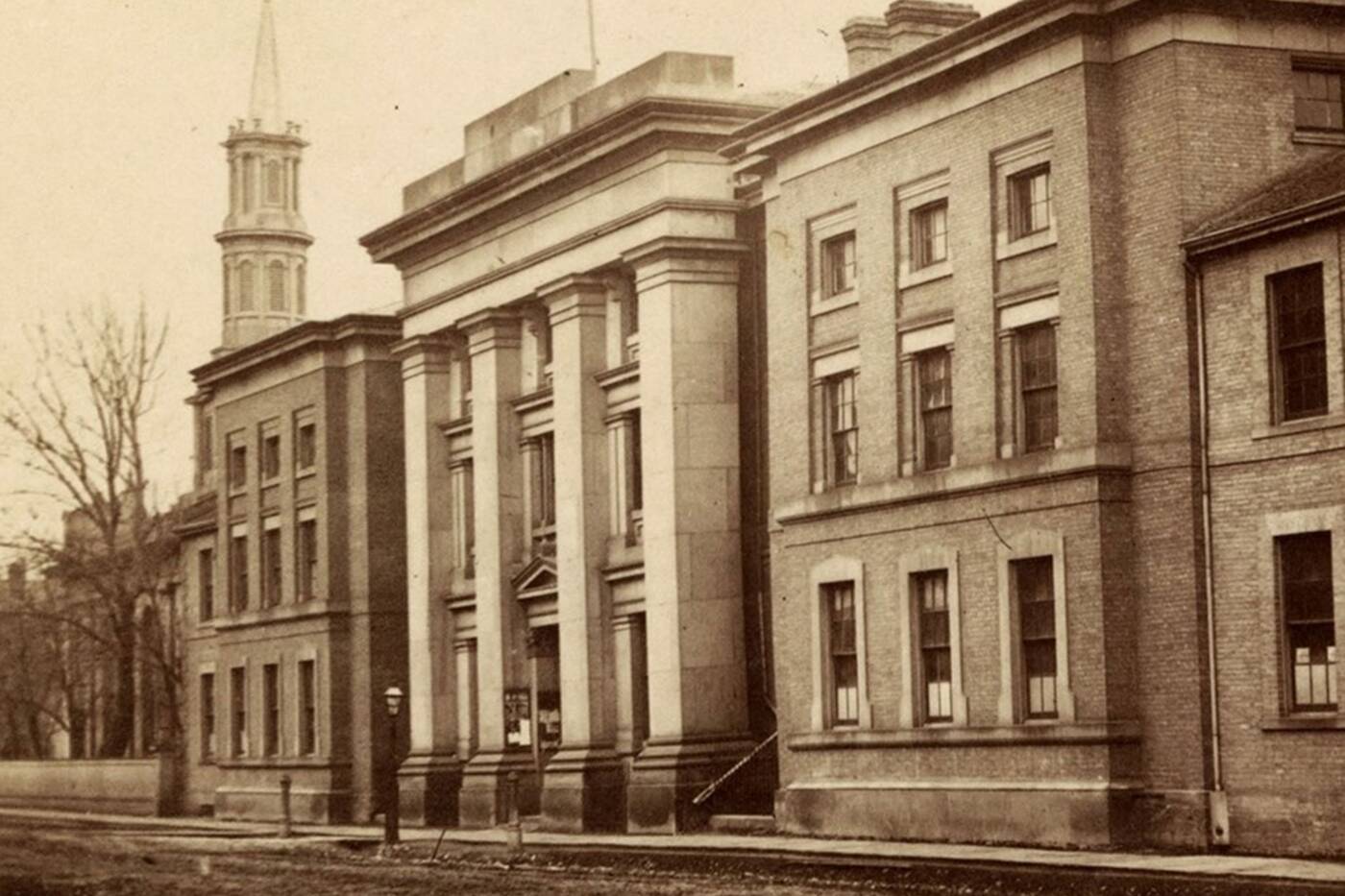 The building in the centre of the three structures is the York County Court House (Adelaide Street Court House) in 1867. Photo via Toronto Public Library.

Many of the original facilities of the courthouse still remain, such as the marble trim around doorways. Also, I am told that the old jail cells remain, a poignant reminder of the grim life prisoners experienced behind bars in those years.

During this period, the death penalty was employed for about 120 crimes. However, in 1865, hanging was finally restricted as punishment for just murder, rape and treason.

Over the decades, the third courthouse was the sight of many important events. On the morning of March 10, 1862, a sizeable crowd gathered outside it to observe the hanging of James Brown on a scaffold erected behind the courthouse.

Brown was executed for his role in the death of the journalist and politician John Sheridan Hogan, during an attack by the dreaded "Brooks' Bush Gang." He was the last man to be hanged in public in Toronto. 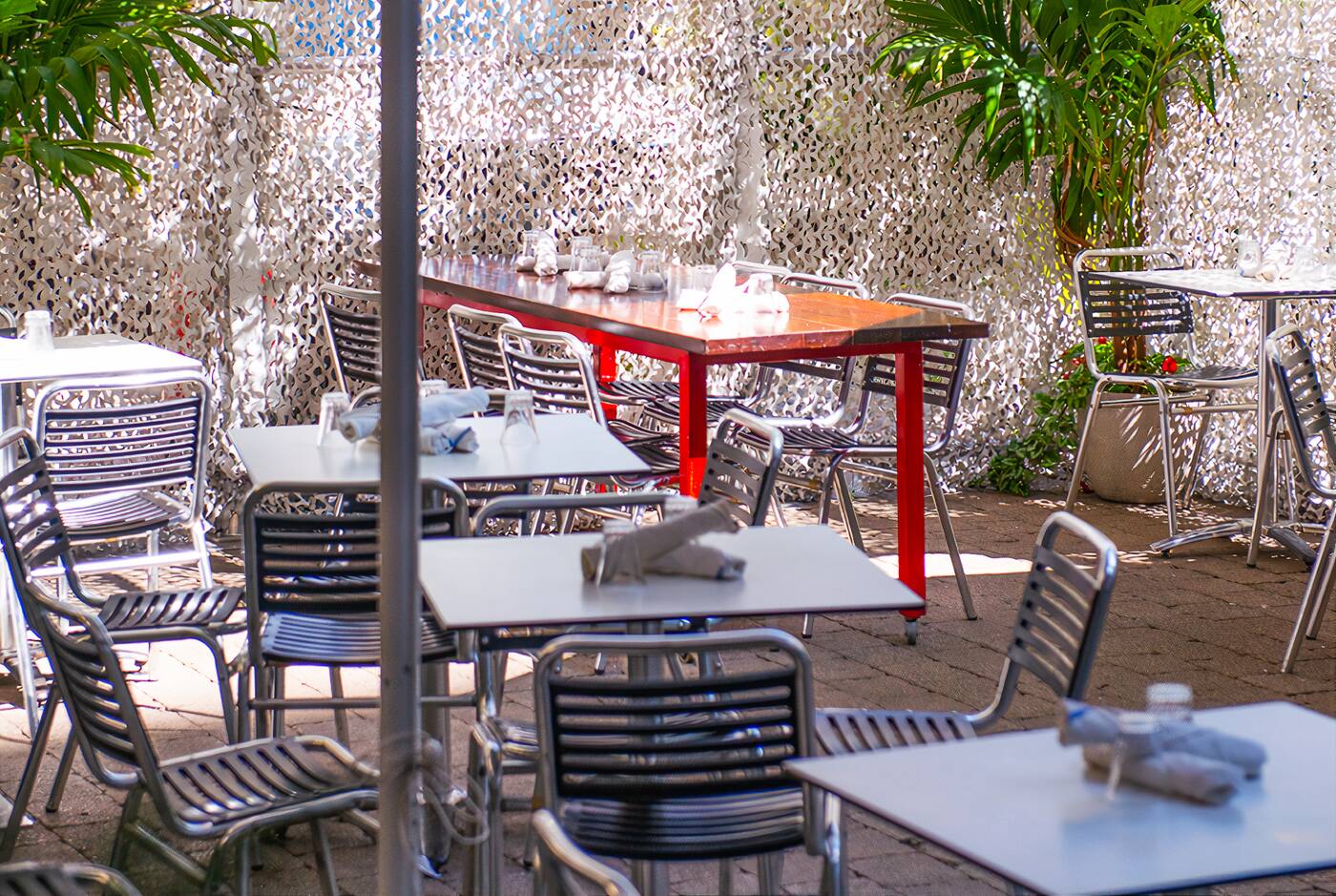 A little morbid history with your al fresco? Photo via Terroni.

When the Don Jail opened in 1864, hangings were moved indoors to a space inside the prison. Today, the site of the last public hanging is a pleasant garden area at the rear of the Adelaide Street Court House, where Terroni customers are able to dine alfresco. 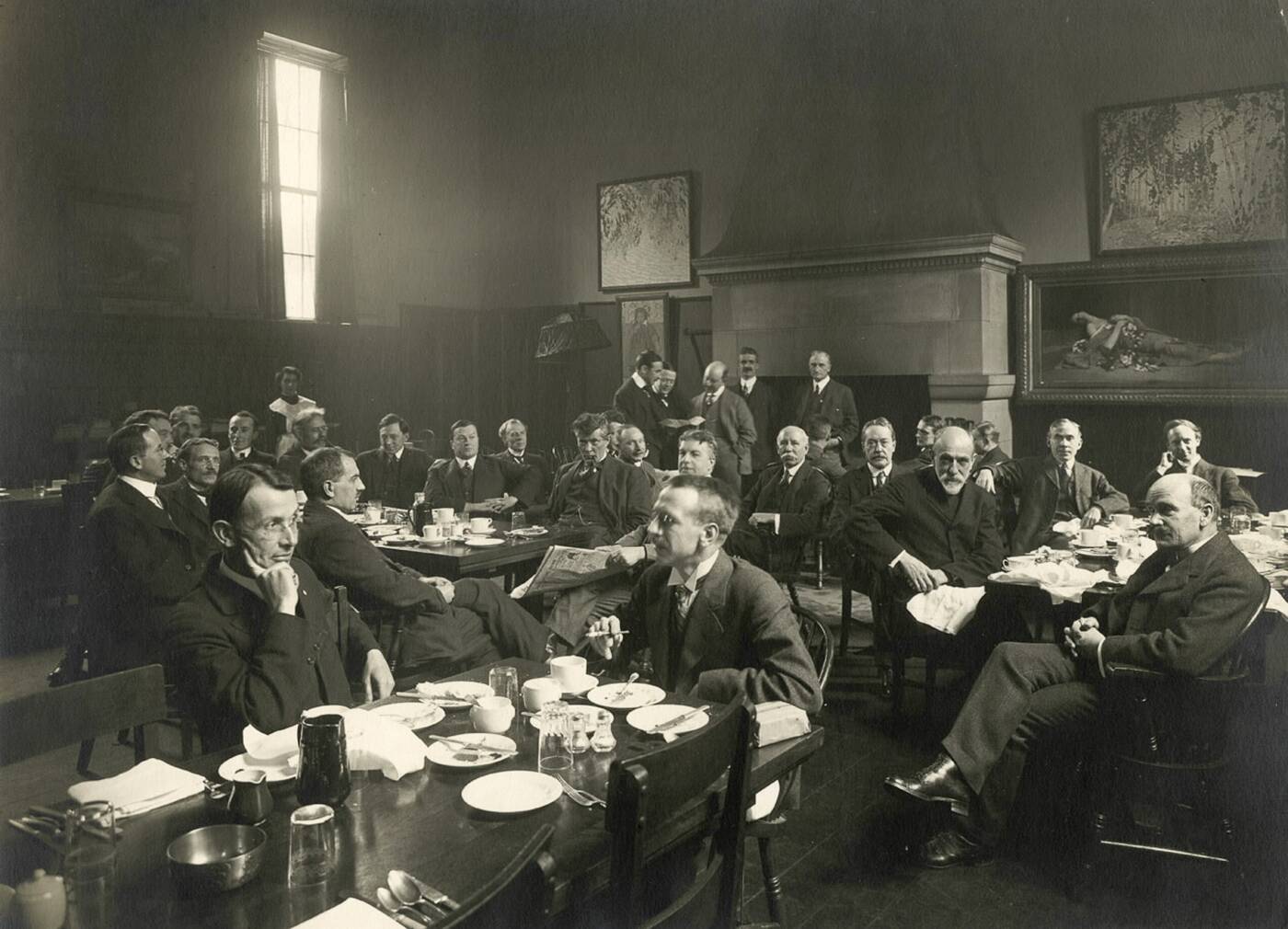 The Group of Seven and their Arts & Letters buddies were already eating at the court house in the 1920s. Via Toronto Public Library.

When the Group of Seven was formed in 1909, the third Toronto court was unoccupied, as the courts had been relocated to Bay and Queen. The Arts and Letters Club of Toronto rented it for their meetings.

The private club’s members included writers, architects, musicians, painters, graphic artists, actors and others working in or with a love of the arts.

During the years the building was home of the Arts and Letters Club, many important cultural events were held within its walls, including concerts by Pablo Casals and Sergei Rachmaninoff.

The club entertained many famous people, among them Sir Wilfred Laurier, Vincent Massey, Sir Ernest MacMillan, Dr. Healey Whillan and Sir William Mulock and many of Toronto’s richest citizens. Finally, the club relocated to St George’s Hall on Elm Street, in 1920, where it still is today.

For several years, the old courthouse housed The Court House Market Grill and Restaurant. Today, as mentioned, it is a Terroni.

Doug Taylor was a teacher, historian, author and artist who wrote extensively about Toronto history on tayloronhistory.com. This article first appeared on his site on May 29, 2019 and has been republished here with the permission of his estate. The article has been modified slightly.