But it's the finer details that really give the neighbourhood its feel, and if you can ignore the allure of the tourist-marketed sights and attractions you'll find a treasure trove of bits and pieces of the city's past. One of my favourite parts of the neighbourhood is St. James Cathedral, not only because the cathedral itself is a beautiful addition to the streetscape, but because stories cling to it like disturbed ghosts whispering from a different time.

Sometimes it's hard to imagine different times in Toronto's past, but if you walk up the front steps of the cathedral you'll be reminded of the city's first citizens in a rather grim fashion: the entrance is surrounded by gravestones. The gravestones weren't always attached to the building; they actually used to fill a graveyard just to the east, on the current site of St. James Park. By 1844 the graveyard had become overcrowded and many of the graves were relocated further north to St. James Cemetary at Bloor and Parliament.

Some of the gravestones were moved along with the bodies, while others were just abandoned. A few, though, were moved to cathedral, and still decorate it today. One in particular stands out, the grave of John Ridout, the victim in what Wikipedia calls one of the world's most famous duels. Ridout's golden-brown gravestone is on the left hand side, just before the main doors.

It's hard to imagine a time when duels were an accepted practice, but it's even harder to imagine that the famous duel between John Ridout and Samuel Jarvis took place on Yonge Street near present day College Street, an area that was then well out of the city. Different sources say different things about what precipitated the duel (sometimes in highly dramatic fashion), but one thing is certain: the two men did not like each other. At one point it was recorded that Ridout was ejected from Jarvis' office, and not long after the two men were found brawling in the street. These events are often cited as leading up to duel, which took place near dawn on July 12, 1817. 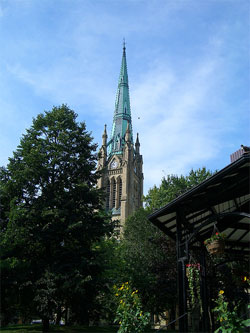 The rules of the duel stated that both men were to count to three before firing, but for an unknown reason - some say the counting was too quiet, others say Ridout was just too nervous - Ridout fired his shot before the counting was finished. He missed Jarvis, but after some deliberation it was decided that Jarvis was still entitled to have his shot. The weaponless Ridout could only stand and receive the single shot that killed him. Some legends say he stood on his feet long enough to shake Jarvis' hand and forgive him, but other stories (and the results of an autopsy) state that he was likely killed instantly.

The grave on St. James Cathedral tells that Ridout was well-loved by his family, but does not go into the details of his death, saying instead that "a Blight came, and he was consigned to an early Grave."

Next time you're in the area it's worth taking a second to have a look at the gravestone - it's an eerie reminder of a different time in Toronto's past, and just one of the many historic gems in the St. Lawrence Market neighbourhood.

Top image by smlgphotos, bottom image by yoyoeq of the blogTO flickr pool. Middle one by me.