Get to know a street: Elm Street

Elm Street is definitely not a nightmare in this city. Instead, it's a calm respite from the craziness of Yonge Street in the downtown core. It contains some classic old stalwarts but has also had an injection of some exciting new businesses lately.

The section from McCaul to Bay is the hospital district, which makes for a relatively uninteresting walk, save a sprinkling of lunch options. However, the stretch from Bay to Yonge is a pleasant stroll past a cluster of historic Victorian-era buildings. The high concentration of restaurants here reminds me of the Baldwin strip, and houses an equally enticing collection of good eats - amongst a few other amusements - at all price points.

Here's an overview of what Elm has to offer.

The Queen and Beaver (35 Elm St.)
A nice patio option in the summer that's less formal than some of the others on Elm, this gastropub (the owners are also responsible for The Oxley in Yorkville) serves upscale British grub like rabbit and potato pie or a hand chopped burger with chips (translation: fries). For those with a real hankering for the English experience, there's roast beef and Yorkshire pudding on Sundays. Wash things down with a cask beer or a Pimm's cup. Jolly good. 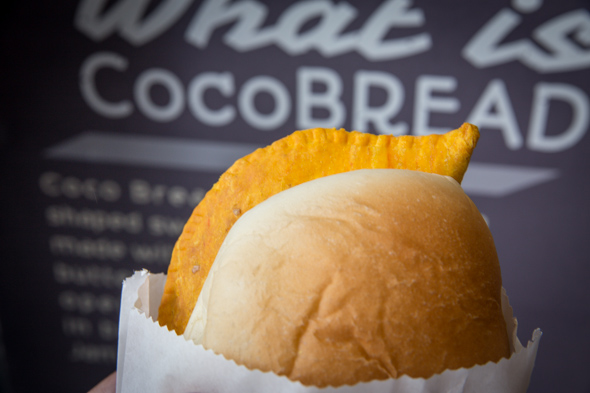 Patties Express (4 Elm St.)
Just one of the new takeout options on this street for a quick bite, it's difficult to resist freshly baked Jamaican patties (even after having gorged on buns from Lucullus - see below). Choose from a simple menu of beef (at three different spice levels), curry chicken or veggie patties with or without coco bread, and drink a Ting or Kola Champagne to complete the Caribbean taste experience.

Pizzeria via Mercanti (87 Elm St.)
Housed on the ground floor of a 19th-century heritage building owned by the YWCA, the second location of Romolo Salvati's Neapolitan pizzeria (the first is in Kensington Market) features a sweet patio with picnic tables in addition to the indoor dining areas. The $10 lunch special where you can get a small margherita pizza with a side salad is a good deal. 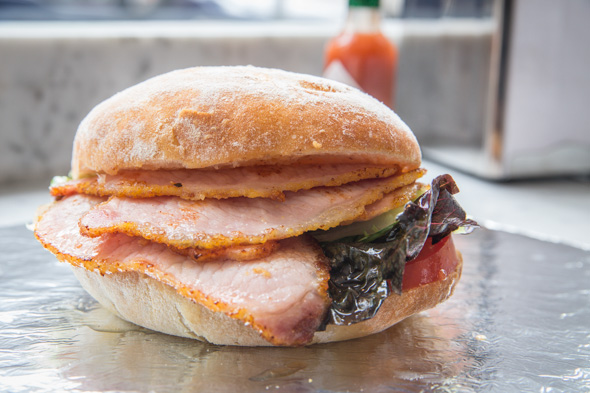 TLP Sandwich Co (15 Elm St.)
A hip new takeout sandwich joint from the owners of Barberian's (see below), the signature TLP contains tomato, lettuce and peameal bacon (the acronym also stands for the Three Little Pigs, which is a reference to the three owners, in case you're wondering). The place is still solidifying its permanent menu, but so far other offerings include the Charlie Blake, with slow-braised beef, and the Calamar, with crispy squid and "lemony" mayo. Definitely one to add into the lunch rotation if you work nearby.

Adega (33 Elm St.)
Right next to the Queen and Beaver, this Portuguese and Mediterranean-influenced restaurant specializes in seafood done right. The Cataplana, a stew of mussels, shrimp, clams, squid and fresh fish in a tomato broth, is a reliable favourite. A fine selection of Portuguese wines and ports add to Adega's rustic, Old World charm ("adega" does mean "wine cellar," after all). 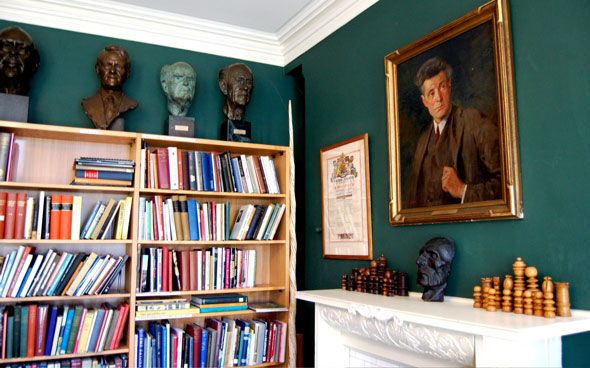 Arts & Letters Club (14 Elm St.)
The original Spoke Club or Soho House of this city, the Arts & Letters Club is a gathering place for people who work in the arts and for those who appreciate them. The Group of Seven were all members and lunched here regularly. Founded in 1908 (and moved to this National Historic Site building in 1920), this club only began to permit female members in 1985, so the ghost who haunts its library is most likely a dude. Membership fees increase with age, and prices are much more reasonable than those other two too-cool-for-school clubs.

Barberian's (7 Elm St.)
Barberian's is a classic steakhouse that's been around since 1959. It's a favourite for a pricey night out, with an extensive wine list of over 3,000 bottles that you can reserve ahead of time; the restaurant's menu even has a "special" where you can get a 14-oz. Barberian's Steakburger for 99 cents if you purchase a bottle for $100 or more. Needless to say, the steaks, not to mention the wine cellar, are stellar. 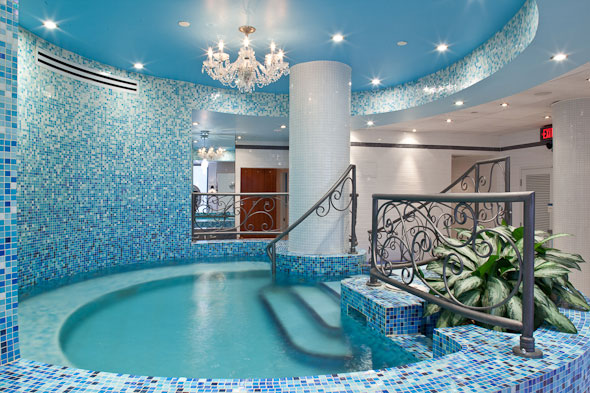 Elmwood Spa (18 Elm St.)
The Elmwood's landmark heritage building is gorgeous. With its stone base and red-brick Roman arches, I feel chills just walking up the stairs to the front entrance. Originally built as a YWCA in 1891, the spa now welcomes both women and men (although 80% of the clientele are female), and frequently makes best-of lists. Four floors of spa, with 34 treatment rooms (including the Sapphire couples suite, which boasts a fireplace and personal shower), two restaurants (including Bangkok Garden), a juice bar and a water therapies area with complimentary use of the whirlpool, swimming pool and steam room when you book a treatment, are the recipe to luxe relaxation.

Lucullus Bakery (31 Elm St.)
This downtown locale of Lucullus looks a little more fancy than its counterparts in Markham and Richmond Hill. Set in a 19th-century historical building that used to be a home, it's really a beautiful space for a bakery. Get there early or your favourite Chinese buns may sell out (BBQ pork buns were all gone the last time I went). They've also got a mix of affordable Asian and Western hot meals made to order in the back kitchen. The spacious upstairs seating area has some cool decor, and with the added bonus of free WiFi, this should be the perfect study spot for Ryerson students. 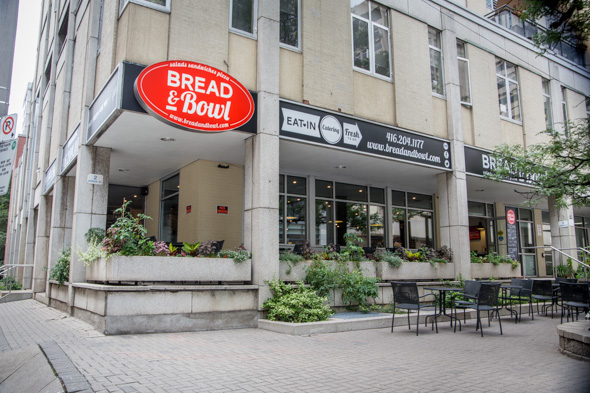 Bread and Bowl (2 Murray St.)
The service is super attentive and friendly at this relatively new weekday meal option for hospital and office workers in the area. You can create your own freshly made pizza, salad or sandwich here, or if you aren't in the mood to be creative, just choose from their solid signature offerings. There are also grab-and-go baked goods like muffin tops (what do they do with the bottoms?!) and ridiculously gargantuan brownies to go with espresso bar drinks.

Bite Bar (57 Elm St.)
If you're into bite-sized baked goods and/or dessert-themed evening cocktails and martinis in an unapologetically girly setting, then this is your place. Adorable one-bite cupcakes, mini cheesecakes, tiny tarts, micro macarons and itty-bitty donuts in gourmet flavours can be paired with alcoholic liquid sweets in the form of maple bacon bourbons and chocolate salted caramel pretzel-tinis. 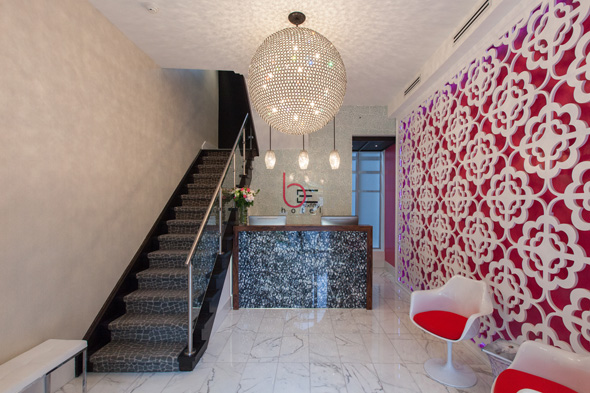 BeSixFifty Hotel (650 Bay St.)
This shiny and new 22-room boutique hotel replacing the grungy Bay Street Motel is an appealing option for tourists (or staycationers) who want easy access to the bright lights and bustle of Yonge-Dundas Square. An iPad and free WiFi in rooms, as well as discounted gym access up the street at Hard Candy are just some of the perks. Even if you don't stay overnight, the bright and welcoming 650 Cafe Bistro next door serving Mediterranean-inspired eats is a worthy visit on its own, as should be the hotel's soon-to-open rooftop lounge and bar.

Sliced (650 Bay St.)
Sharing a building with the BeSixFifty Hotel at the intersection of Bay and Elm, this primarily takeout breakfast and lunch spot tries to emulate Pret a Manger with ultra fresh, preservative-, hormone- and additive-free sandwiches, soups, salads and baked goods made using local and organic ingredients. It's a bit pricier than Pret, but has a like-minded social conscience: all perishable items that aren't sold by the end of the day are donated to Second Harvest.