Late night eats north of the 401 prove that, contrary to what many people may think, there's quite a bit of activity in the area when the sun goes down. From bubble tea cafes to bars, and from pubs to karaoke, there's no shortage of ways to relieve your bulging wallet's contents on a weekend night. A natural corollary of that fact is that the urge to stuff our faces with unholy amounts of food arises around midnight, and late night dining up in the suburbs is alive and thriving.

Here are my top restaurant picks for late night eats north of the 401.

Chako Barbeque Izakaya (2190 McNicoll Avenue, Scarborough)
Nothing beats the late-night blues like sizzling pieces of marinated ribs cooking right in front of you. With special late night weekday pricing of $11.99 for all-you-can-eat barbecued meats, it's truly a place that will equally appeal to carnivores and turn off vegetarians everywhere. While you shouldn't expect ultra high-end cuts of meat, you do get an awesome array of solid choices ranging from beef to the ever-popular Korean short ribs. Throw in the hip and modern feel of the place, and you can easily see why it's a big hit. Open until 1 am.

Markham Station (5117 Sheppard Avenue, Scarborough)
It's practically impossible to find anybody growing up near Scarborough who hasn't heard of Markham Station. Truly one of the most popular stops (pun intended) on many a post-midnight journey from bars, parties, and other events where a teensy bit of intoxication may have occurred, Markham Station isn't a place you go to for fine dining and white tablecloths.

It's a 24-hour place where you can stuff your face with their all-day breakfast (containing 3 eggs, bacon, and homefries - just what every growing boy/girl needs) for 5 bucks and leave feeling a little less dizzy. The service may be a bit on the sparse side, but your tummy certainly won't be. And at 4 am, that's really what matters.

Tasty & Tasty (1883 McNicoll Avenue, Scarborough)
Despite the hilariously awful name, this restaurant draws quite a large clientele looking for some homestyle Asian cooking in the middle of the night. Frequented by many Scarborough students during post-party (or post-cramming session) hunger attacks, this small and almost hidden Northern Chinese restaurant serves up a large variety of hot dishes, such as their popular grilled fish in spicy soup, along with a nice side of bubble tea to cool down your fiery taste buds. Open until 4 am on most days. 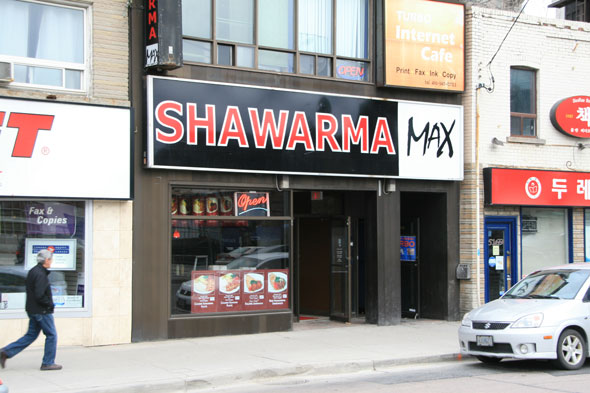 Shawarma Max (4969 Yonge Street, North York)
Despite its modest interior and presentation, it's hard to get a better shawarma deal in the suburbs than Shawarma Max. For around $6, you can feast on a multitude of juicy and tasty shawarmas, lathered in a velvety smooth yogurt sauce and chockfull of refreshing vegetables, in the middle of the night. One bite of their popular chicken shawarma and you'll see why this place is a big hit for many in the area. They're even open until 4 am on weekends, perfect for when you're coming out of a late night Gangnam session in one of the many karaoke joints that populate the area.

Wonder Fusion Corp (505 Highway 7 East, Richmond Hill)
No, this isn't the name of a startup software company (or an underwear store, for that matter), but the rather unfortunately-mangled name of the Richmond Hill location of a popular Szechuan Chinese restaurant chain. This (very) northern location, in contrast to its North York and Scarborough locations, looks nicer and is significantly more spacious, making it a great place to grab some spicy fish (sui zhu yu) or fried chili chicken on any cold winter's night. The servers wearing LED name tags add a cute, if impractical, touch to your dining experience. Open until 2 am on most days. 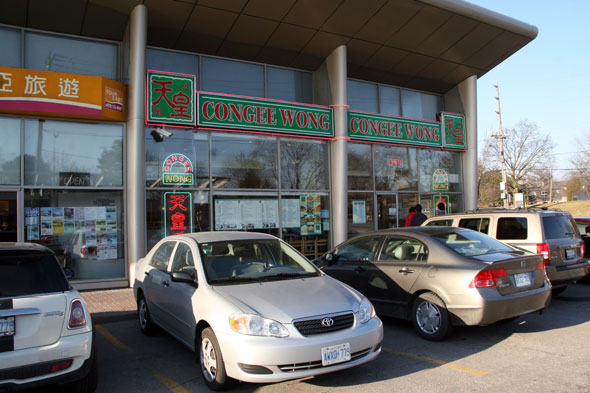 Congee Wong (10 Ravel Road, North York)
An absolute staple for late night family meals and post-party munchdowns alike, Congee Wong has been serving up countless bowls of their popular namesake dish along with many other favourites such as the flavourful chili turnip cakes, and spicy Kung Pao chicken for what seems like an eternity.

It's not uncommon to see lineups out the door during mealtimes, where the odds of getting a seat are almost as long as winning anything above $10 on a scratch-and-win card, but this shouldn't pose too much of a problem for late-night revelers (especially as the place is open until 1 am most nights and 2 am on weekends).

Owl of Minerva (5324 Yonge Street, North York)
Despite boasting a name that always reminds me of a math tutorial place, this restaurant serves up what many would argue to be the best gam ja tang (Korean pork bone soup) in town. The restaurant chain has several locations, but the North York one is definitely among the top ones to visit, with cramped seating and random Korean TV shows in the background adding to its quirky charm.

If the spicy pork broth isn't up your alley (which would definitely put you in the minority), then scarf down on their marinated bulgogi. And did I mention it's open 24 hours? Win. 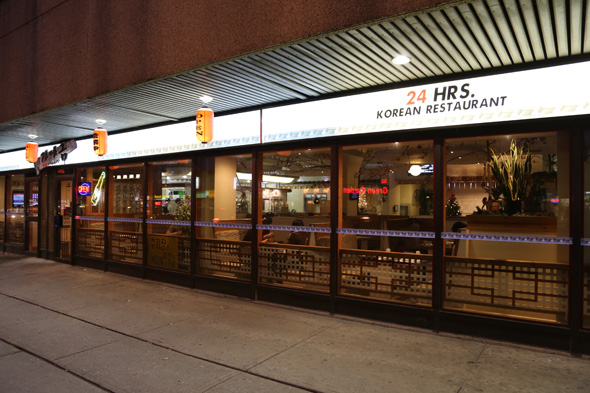 Kayagum (5470 Yonge Street, North York)
If the idea of 24-hour bibimbap appeals to you, then head over to this Korean restaurant just south of the Finch subway station. Ordering at this simple restaurant is always a treat, as they frequently serve you with a nice combination of banchans and thick soup to tide you over. Some of their other delicious (and rather underrated) dishes include the spicy fried chicken and rice cakes.

The flavours are consistently strong, with friendly and efficient service to tie it all together. The large number of booth seats is a nice touch, while the decorations--which can only be described as classy with a touch of tacky--need to be seen to be believed.

Khorak Supermarket (6125 Yonge Street, North York)
"But that's a grocery store!" I hear some of you say. True, but it's also a place where you can pick up a smorgasbord of kebabs, giant meatballs, and Persian desserts, 24 hours a day. And you can do so while picking up your week's groceries in the relative peace that a 4 am shopping experience will grant you. Don't be surprised though, at the fact that you will still encounter quite a few shoppers/diners/students/curious souls even at said random hours--such is the popularity of this place among locals. After all, who needs a superMARKET when you have a superKHORAK?

Ajisen Ramen (5229 Yonge Street, North York)
Ajisen Ramen is seen by many around the world as the Tim Hortons of ramen due to its ubiquity, relatively low prices, and popularity. This location serves up all of Ajisen's signature ramens (such as their delicious namesake dish) along with a nice variety of rice dishes, such as the satisfying deep fried chicken curry rice, all the way until midnight. While not on the same level of sophistication as Momofuku or Kinton, this is still a great place to go for a quick hit of that hot noodle broth. It ain't fancy dining, but it'll certainly hit the spot. 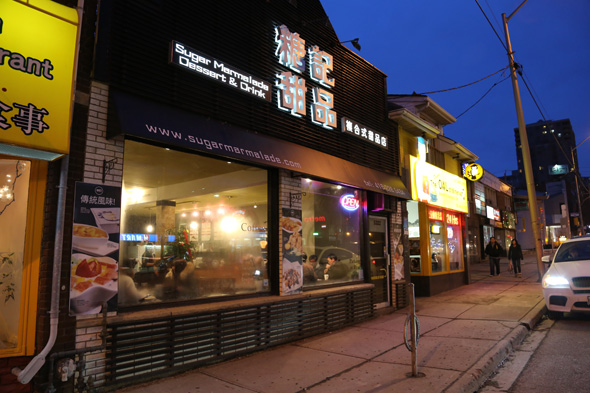 Sugar Marmalade (5322 Yonge Street, North York)
Sometimes what you want in the middle of the night isn't heaping amounts of grease, but rather something to satisfy your sweet tooth craving. Sugar Marmalade aims to fill that gaping void in your stomach (or mouth?) by providing a large variety of both traditional and fusion Chinese desserts in a modern setting.

While there are multiple locations, the North York one is arguably the place to go, with an urban upscale feel, efficient service, and free wi-fi all the way until its closing time of around 3 am on weekends. And if you still want something to eat while slurping your delicious mango pudding, you can gorge on the various noodles, fried goodies, and fish balls that this place has to offer. Free parking at the rear!

Posted by Darren "DKLo" Susilo. He hangs out on the twitter and his own mansion.