Ontario Craft Beer Week hits Toronto this Sunday for its third annual tribute to the great beers that this province has to offer. The week is composed of over 120 individual events in 70 different venues across the province and includes beer and food pairings, brewmaster's dinners, pub crawls, brewer collaborations, celebrations of cask ales and one-offs and much, much more.

And while all of that is clearly awesome, it's actually almost too much to handle. I mean I love beer as much as the next person (OK, maybe a little more), but when you consider that there are 16 different events on the first day of festivities alone, navigating the options becomes a bit overwhelming â not to mention how absolutely disastrous it would be for your liver to even try to attend all the events (to say nothing about the damage that all that cheese might do...).

There is a comprehensive list of every event happening in Ontario on the OCB Week website, but I've taken the liberty of compiling the Toronto highlights by honing the list to a manageable two or three local events for each day of the week, many of which should appeal to the beer geek and the uninitiated alike.

Father's Day Brewmaster's Dinner with Mill St. Brewmaster Joel Manning
When: 5:30pm
Where: The Fairmont Royal York
Why you should go: If bacon-wrapped Canadian prime beef tenderloin wasn't enough to entice you, consider that you'll also have an opportunity to try Mill Street's Royal York Stinger Honey Beer, a beer brewed exclusively for the Royal York Hotel using honey produced in the hives on the hotel's roof. And if you want to tell the guy who brews it how much you like it, Joel Manning will be right there.
Cost: $79.00

Father's Day Beer Brunch
When: 11:30am-3:30pm
Where: Toca Restaurant at the Ritz-Carleton
Why you should go: Not only does the food sound outstanding (lobster, king crab, whole suckling pig, and beef wellington), but this event will feature beers from Muskoka Brewery. And I'm hard pressed to think of too many other craft brewers who make so much consistently great beer. Don't believe me? Then check out this event where Muskoka Cream Ale, Muskoka Summer Weiss, Muskoka Dark Ale, Muskoka Mad Tom IPA, Muskoka Spring Oddity, and Muskoka Craft Lager will all be available. Also, when's the last time you had beer and beef wellington for brunch?

Cameron's Father's Day BBQ and Birthday Bash
When: 12pm-5pm
Where: Cameron's Brewery, 1165 Invicta Drive, Oakville
Why you should go: In addition to Father's Day, Cameron's barbecue will celebrate the Oakville brewer's 15th anniversary. There's a bouncy castle for the kids, grilled meat, and a Caesar challenge. You had me at bouncy castle.
Cost: $25 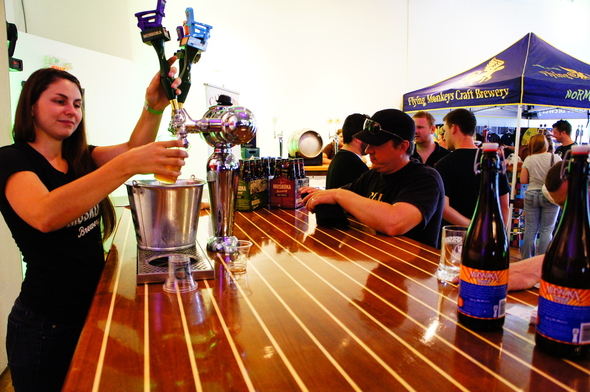 Great Lakes Brewery's Third Annual Four Course Beer Dinner
When: 7pm-10pm
Where: The Harbord House
Why you should go: The event features a four-course dinner (obviously) and each course is paired with one-off cask beer brewed specifically for this occasion. Toronto's oldest craft brewers know a thing or two about beer so it's a safe bet there'll be some great beer on hand. Bonus: If Great Lakes' experimental brewmaster Mike Lackey is in attendance, he might let you touch his beard!
Cost: $50

Canadian Beer News Dinner Series #5: Amsterdam Brewery vs. Flat Rock Cellars
When: 7pm-11pm
Where: Beast Restaurant
Why you should go: Each course of this elaborate dinner will be served with a Flat Rock Cellars wine pairing and an Amsterdam Brewery beer pairing, so for once in your life you can look sophisticated while double-fisting drinks. The idea is a friendly competition to see which pairs better with food and, naturally, the losers will do the dishes.
Bonus: Amsterdam and Flatrock collaborated on a beverage for the dessert course.
Cost: $100, limited seating

Competing East vs. West Pub Crawls
Taking Toronto's East vs. West rivalry to boozy extremes, Tuesday features competing pub crawls in opposite ends of the city. In the West, Ontario brewers Beau's All Natural, Great Lakes, and Muskoka lead a pub crawl through Roncesvalles and Parkdale, hitting The Local, The Dizzy, Cardinal Rule, The Sister, and The Rhino; while in the East, brewing industry vet Troy Burtch leads a team of brewers and drinkers through the Danforth, stopping at Sarah's, Morgan's, The Only, and Brass Taps.
When: Both start at 7pm.
Why you should go: Both pub crawls will feature unique beers and experts on hand to answer any beer questions you may have, and/or eat shawarma with you at the end of the night.

Craft Beer and Latin Jazz
When: 7pm - 11pm
Where: Latinada
Why you should go: When one thinks Ontario Craft Beer, one immediately thinks of Latin jazz--wait, what? OK, so this one doesn't really make a ton of sense, but it still promises to be a good time and will feature great beer and cask offerings from Burlington brewery Nickel Brook paired with Latin jazz and gourmet food. It's beer and tapas; what more could you want?

Ken's Still Bitter
When: 5pm-9pm
Where: Black Oak Brewery, 75 Horner Ave Unit #1, Etobicoke
Why you should go: Fantastic Etobicoke brewers Black Oak will not only be selling cases of their outstanding and highly-acclaimed Imperial IPA, Ten Bitter Years, they'll also be pouring five limited-edition beers brewed just for Ontario Craft Beer Week and there will be food from Caplansky's, Comida del Pueblo, and Rock Lobster (And did I mention Ten Bitter Years?!)
Cost: $20

Mill Street Beer Flight & Cheese Pairing
Where: The Emmet Ray, 924 College
Why you should go: If you've already clicked on the Ontario Craft Beer Week events page, you'll probably notice a lot of Mill Street Brewery logos. This is mainly because they're doing about 15 beer flight and artisanal cheese events every night of Ontario Craft Beer night. The venues participating throughout the week include great bars like The Painted Lady, The Kennedy Public House, and The Twisted Kilt, but tonight, why not check out one of my favourite bars, The Emmet Ray on College? Partake in some Mill Street beers as well as the bar's excellent and vast selection of some of my other favourite liquids; namely scotch and bourbon. 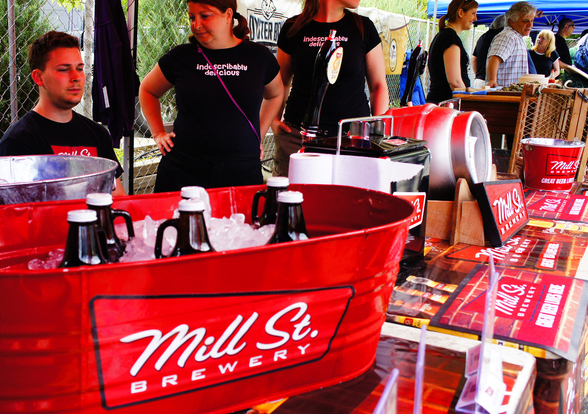 Occupy BarVolo
Where: barVolo, 587 Yonge Street
Why you should go: This event will be exactly like Occupy Toronto.
Except instead of St. James Park, the setting will be barVolo, arguably the city's best beer bar. And instead of protesters, the participants will be Flying Monkeys Brewery, the innovative Barrie brewers who brought you Smashbomb Atomic IPA, Hoptical Illusion Almost Pale Ale, and Netherworld Cascadian Dark Ale. And instead of holding up signs and protesting, they'll be bringing unique one-offs, specialty brews, and cask-conditioned beers.

Muskoka Brewery Brewmaster's Dinner
Where: Arriba Restaurant, Renaissance Hotel
Why you should go: With a beer-tasting dinner presented by Brewmaster James Yii-Jen Tien, paired with an Ontario-inspired six-course meal, this one's bound to be pretty fancy. If you're looking to somehow squeeze date night into your Ontario Craft Beer Week festivities, this might be your best bet.
Cost: $89

The Pan-Ontario Collaborative Dinner
When: 6pm
Where: The Rhino, 1249 Queen West
Why you should go: Sometimes, like with the The Avengers, when you bring a bunch of cool things together, it turns out to be just OK (ahem, Hawkeye). Other times, like when Ontario Craft Beer Week brings together five brewers to make one beer, you can pretty much guarantee it's going to be awesome. Expect no Hawkeye-esque lameness when Beau's All Natural, Flying Monkeys, Grand River, Great Lakes, and Wellington unveil this year's Pan-Ontario beer, a combination of some of their beers that was then aged in bourbon barrels. Representatives from all five breweries (and their beer) will be on hand to lead the tasting. 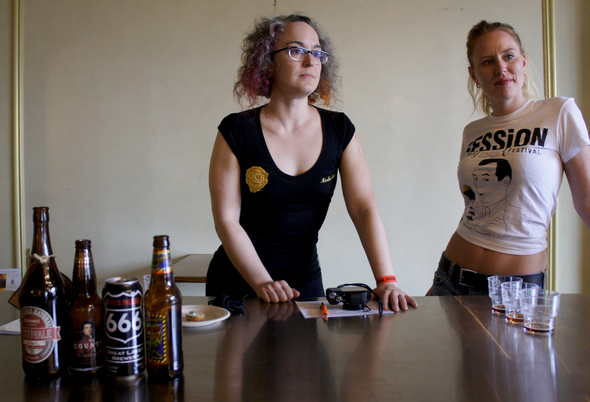 Great Lakes at Burger Bar
Where: Burger Bar, 319 Augusta Ave
Why you should go: All week long Burger Bar will be featuring some fantastic beers from Great Lakes Brewery, including cask ales and a collaboration beer made with Amsterdam Brewery. Since it's Friday night, why not grab a burger and some Great Lakes Beer then smoothly transition into your evening with the aid of Burger Bar's substantial tequila menu?

An Afternoon Tasting of Award Winning Brews
When: 1pm-4pm
Where: Downtown
Why you should go: If you've lived in Toronto for a while. you probably undoubtedly have a short list of "touristy stuff" you've been meaning to do--those things about which you sometimes find yourself saying "You know, I've never done that." Undoutedly, if you have such a list, brewery tours are on there somewhere. So why not scratch it off this week? Take the afternoon off work and tour some great breweries with Craft Brewery Tours. You'll sample regular and seasonal beers and visit three of Black Oak Brewery, Great Lakes Brewery, Mill Street Brewery, or Cameron's Brewery. Then you can focus on scraping together $175 for the CN Tower Edgewalk. 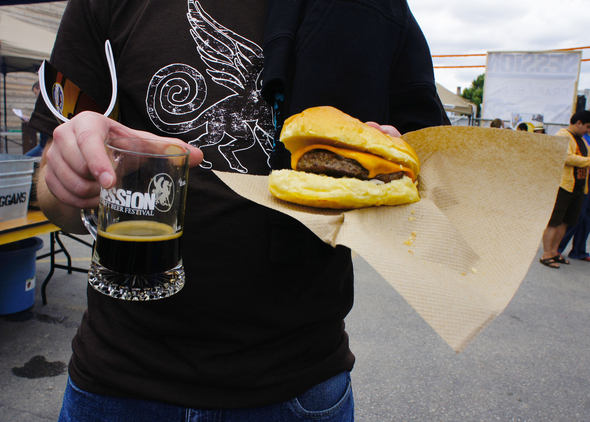 Session 99 Craft Beer Festival
When: 12pm-9pm
Where: 99 Sudbury Street
Why you should go: I mentioned this previously in last week's post on the summer beer festivals in Toronto this year, but this one bears repeating. Session 99 is sort of the unofficial close of Ontario Craft Beer Week, and features food, 100 different beers, live music from a 12-piece soul band, an award-winning illusionist and two stand-up comics. If you decide to hit up just one Ontario Craft Beer Week event, first, shame on you, and second, it should probably be this one.
Cost: The day is broken into two "sessions," 1pm-4pm and 6pm-9pm. A ticket for each session will cost you $45.20 in advance or $50 at the door.