Toronto appreciates beer. We have places like Bar Volo, beerbistro, Victory Cafe, and C'est What, all known for their beer selections. We have about a dozen breweries right here in the city, and now we have one more beer festival to add to the roster already including Ontario Craft Beer Week and the Toronto Beer Festival. Toronto Beer Week is kicking off tomorrow, so what better way to plan your week accordingly than with a preview of what sudsy fun is in store.

Due to the limited quantities associated with making beer in one's home, there is no way to actually taste the beers that have been submitted into TBW's fist Homebrew Competition. From ales to lagers, stouts, bocks and meads - over 90 homebrewers entered. Check out the TBW twitter feed, where the winners will be announced throughout the week.

Sunday at 1pm, beerbistro is hosting a brunch to kick off the festival. Tickets are a little steep at $45, but well worth it for many beer enthusiasts because the food is paired with Quebec's treasured Dieu Du Ciel! and the brewers will be on hand to talk beer.

Bivalve slurping and beer? Starfish is hosting Malt & Mollusks Monday for those who enjoy a few suds with their seafood. Or if you prefer a liquid dinner, Bar Volo has $4 pints for Ontario's top ten beers.

The Paddock's Paper Bag Night will challenge drinkers to guess what beers they are being poured from covered taps, and at Granite Brewery they'll be unveiling a new beer in honour of Toronto Beer Week.

For those who like to intellectualize beer, you can learn about marketing and advertising the stuff from Cass Enright (founder of The Bar Towel) or sit down with a bunch of beer writers at C'Est What.

Bar Volo is hosting the Ontario IPA Cask Challenge Finals, where Great Lakes' My Bitter Wife is going up against Flying Monkeys' Smash Bomb IPA. And the Only CafĂŠ will have Black Oak's brewmaster on hand for a guided tasting, plus Double Cherry Chocolate Stout on tap.

Mark Cutrara and the crew at Cowbell are serving a tasting menu featuring the beers of Muskoka Cottage Brewery, including their new batch of Harvest Ale. Four courses, four beers, $40.

At Victory CafĂŠ, Beau's All Natural Brewing Company and Nickel Brook Brewery will be offering several one offs and some of their regular seasonal beers. Tickets are $20 and include 2 pints (or five 4oz samplers) and food.

At beerbistro, Cass Enright from The Bar Towel is hosting a tasting of four of California's Lost Abbey beers (Carnevale, Red Barn, Avant Garde, and Lost and Found) with brewer Matt Tweedy for $25.

Amsterdam Brewery is launching their fall seasonal beer 'Oktoberest' at the brewery, paired with Caplansky's famous deli fare. The top "best in show" winners from the Homebrew Competition will also be announced. 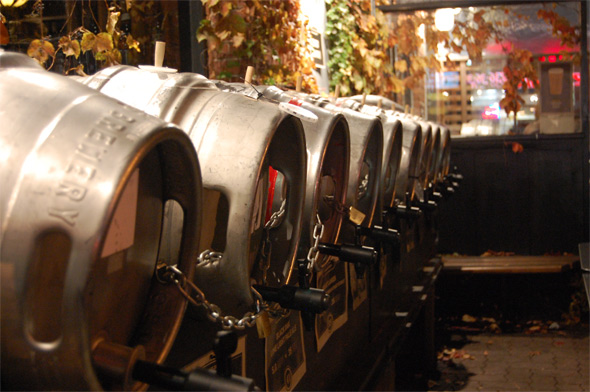 C'est What's holding their 22nd annual Festival of Craft Breweries with (from my experience, very generous) $1 samples. It starts at 5pm, but get there early because it will fill up fast. If you can't make it Friday, it will be going on Saturday too.

And Steam Whistle Brewing Co. is offering a bus tour to their hop farm in Gormely, Ontario. For $20 you'll learn about growing and harvesting hops, and enjoy lunch with some pilsner.

To cap off the whole week, why not unwind with a beer-themed scavenger hunt? The Toronto Beer Quest will have teams of two solve clues about beer, photograph themselves together at the clue location, and reach the finish line to qualify for prizes.

On top of all this, several bars, pubs and restaurants are hosting events all week long. Check out TBW's event listing for the full spread.