Toronto has been building high-rises for more than 130 years now, its ever-changing skyline growing in surges correlating with boom and bust cycles, reflecting generations of varying architectural styles.

It could be argued that the skyscraper era arrived in the city with the Toronto Board of Trade Building in 1892, or the Beard Building in 1894. Both seven storey structures have been considered candidates for Toronto's first skyscraper.

Regardless of which one was first, the 1890s marked a turning point for the skyline. Church spires were out and commerce was in.

The Beard Building's height was considered quite tall by that era's standards, but it would only hold the title of the city's tallest building for two years at 163 King East before the 12-storey Temple Building surpassed it at 62 Richmond West in 1896. It would be Toronto's tallest until 1906.

There has since been a succession of nine different buildings to hold the crown of the city's tallest, all still standing as of 2022. In fact, all nine can all be found within a few blocks in the Financial District, and make for a great stroll through the history of the Toronto high-rise. 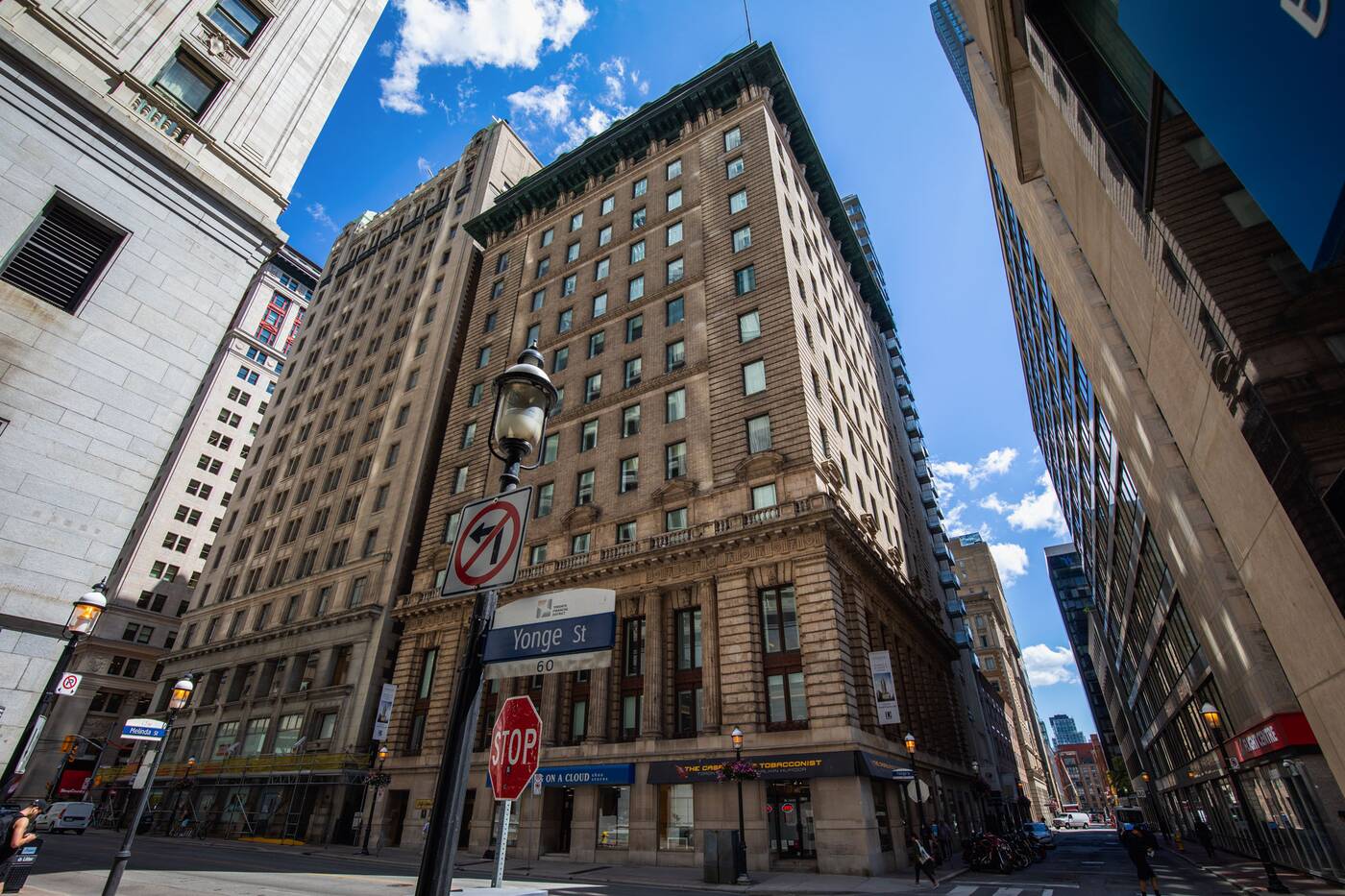 Located at 67 Yonge Street at the northeast corner of Colborne, this surviving office tower's 15-storey, 60-metre height is hardly considered tall next to the gleaming skyscrapers of the Financial District, but it held a six-year reign as Toronto's tallest from 1906 to 1912. 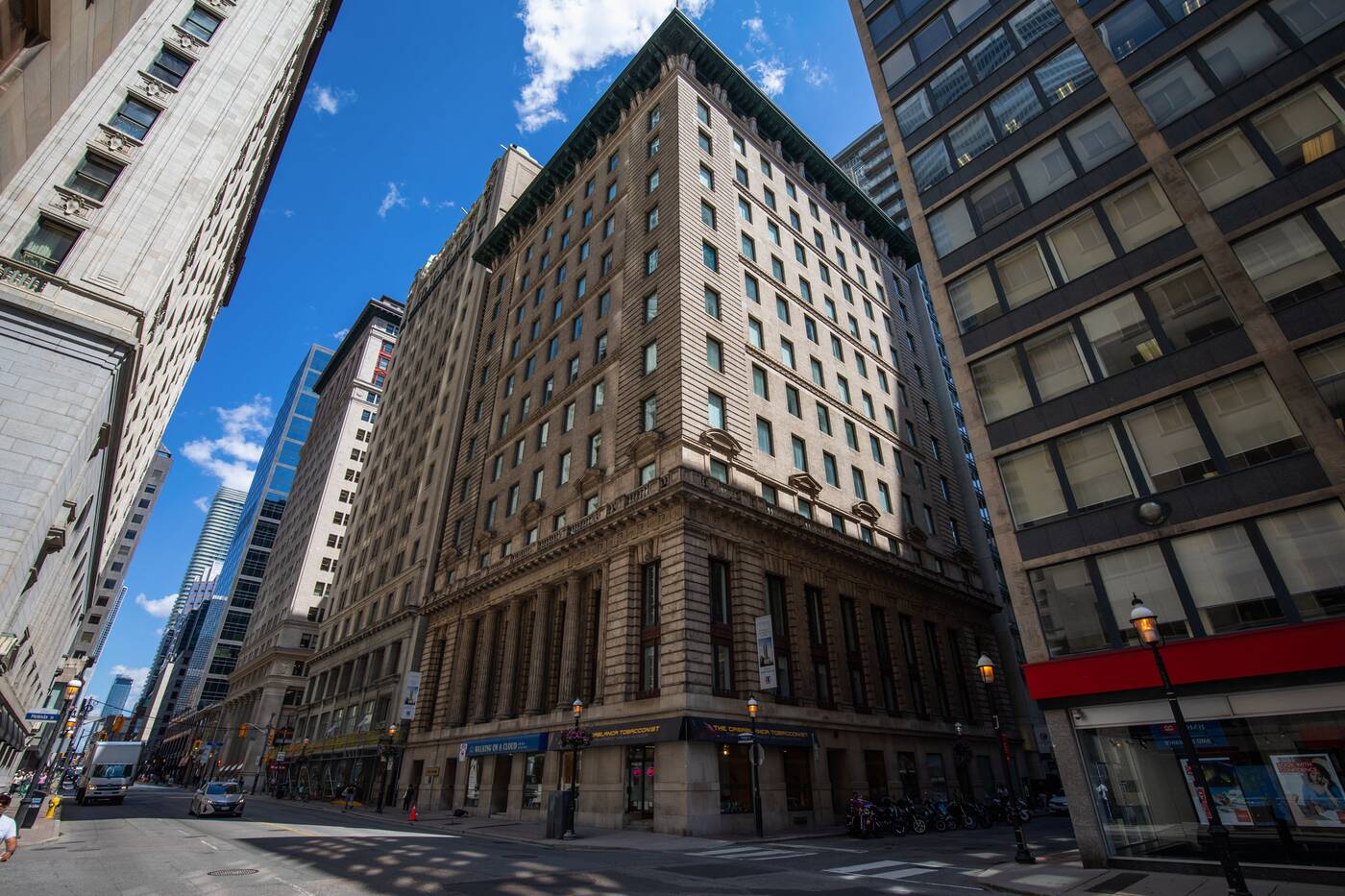 It was also the tallest building in the British Commonwealth for a short time until surpassed by the 1911 Royal Liver Building in Liverpool.

The following year, The Trader's Bank Building was surpassed in Toronto by its neighbour at 69 Yonge Street, which opened as a corporate headquarters for the Canadian Pacific Railway in 1913.

Its 15-storey, 65-metre height was enough to hold the title of Toronto's tallest for just a few years before an even taller one came along. 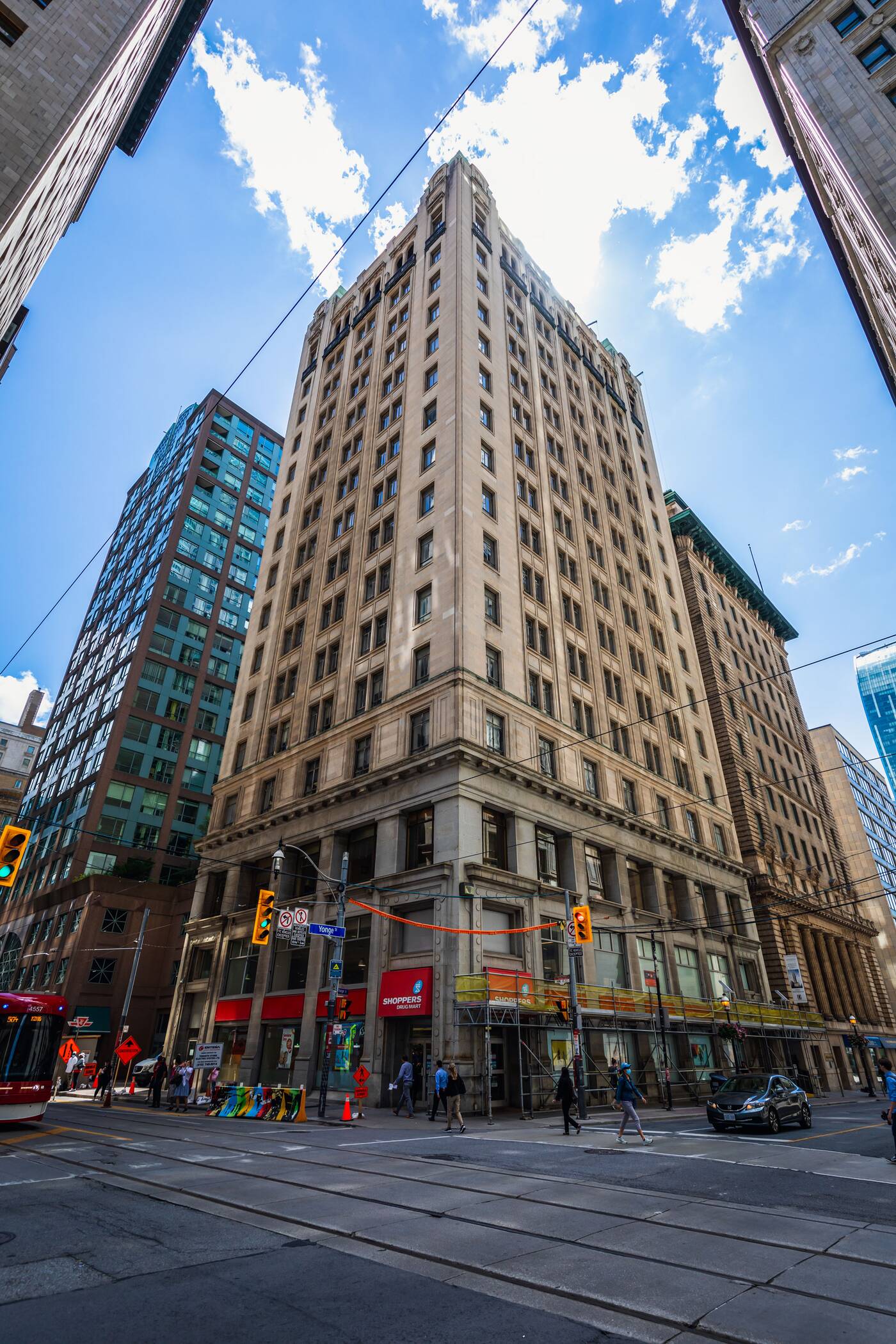 And the current building might get even taller if developers get their way, with plans in the works to retain the heritage skyscraper's exterior as the shell of a new condo. 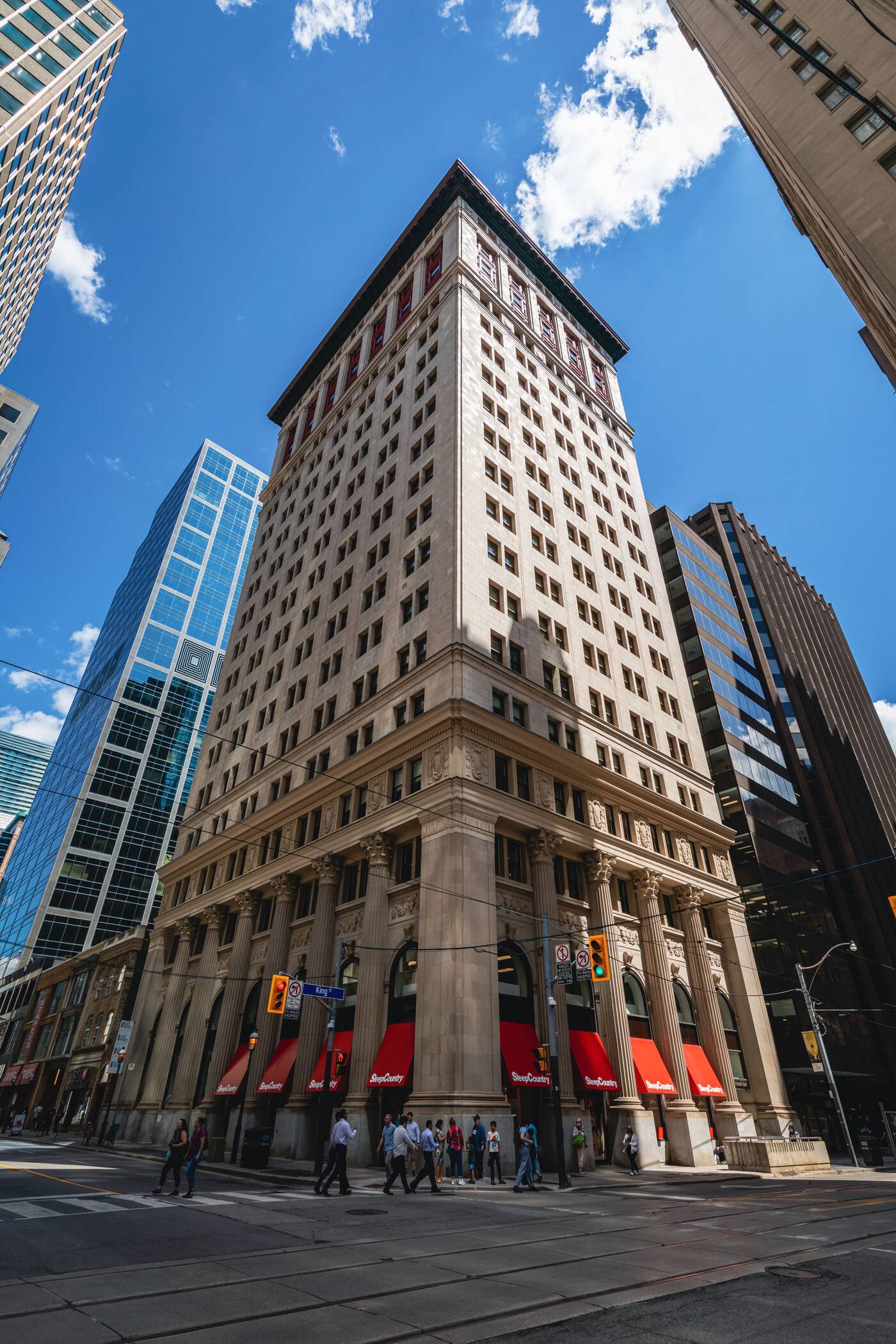 The Royal Bank Building soars 20 storeys with a height of 89 metres, earning it the crown of the city's tallest until 1928, when a wave of Depression-era towers gave the skyline its next big boom.

This tower recently got quite the glow-up, undergoing an extensive exterior restoration that polished off over a century of grime.

The Art Deco skyscraper boom left an indelible mark on Toronto's skyline, and though the resulting towers may not be as tall or as memorable as the era's signature landmarks of New York City, they were the biggest and boldest visions north of the border. 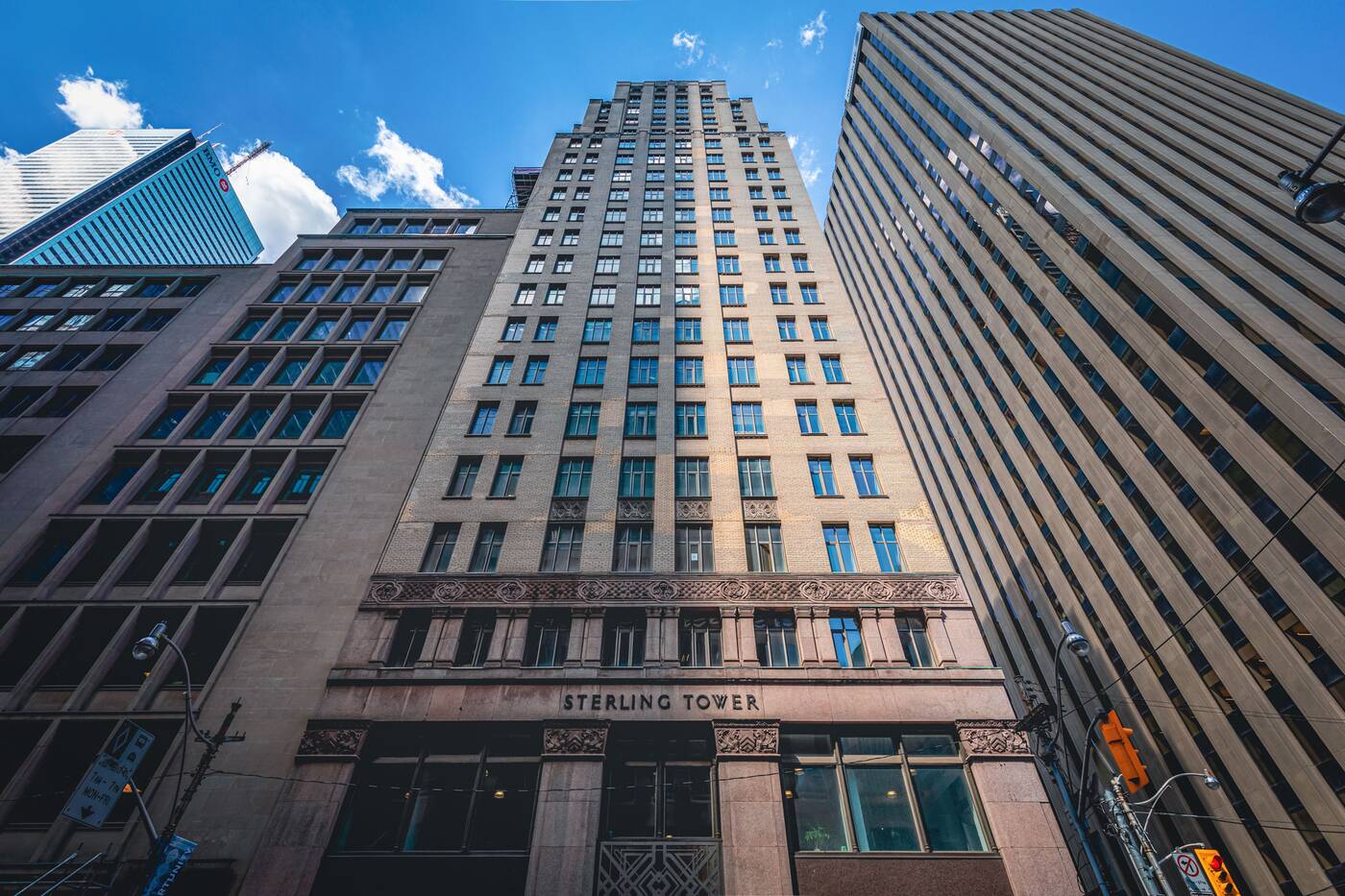 The Sterling Tower at 372 Bay Street was a big deal when it was completed in 1928, its 90-metre, 21-storey height just barely edging out the Royal Bank Building for the title of Toronto's new tallest. 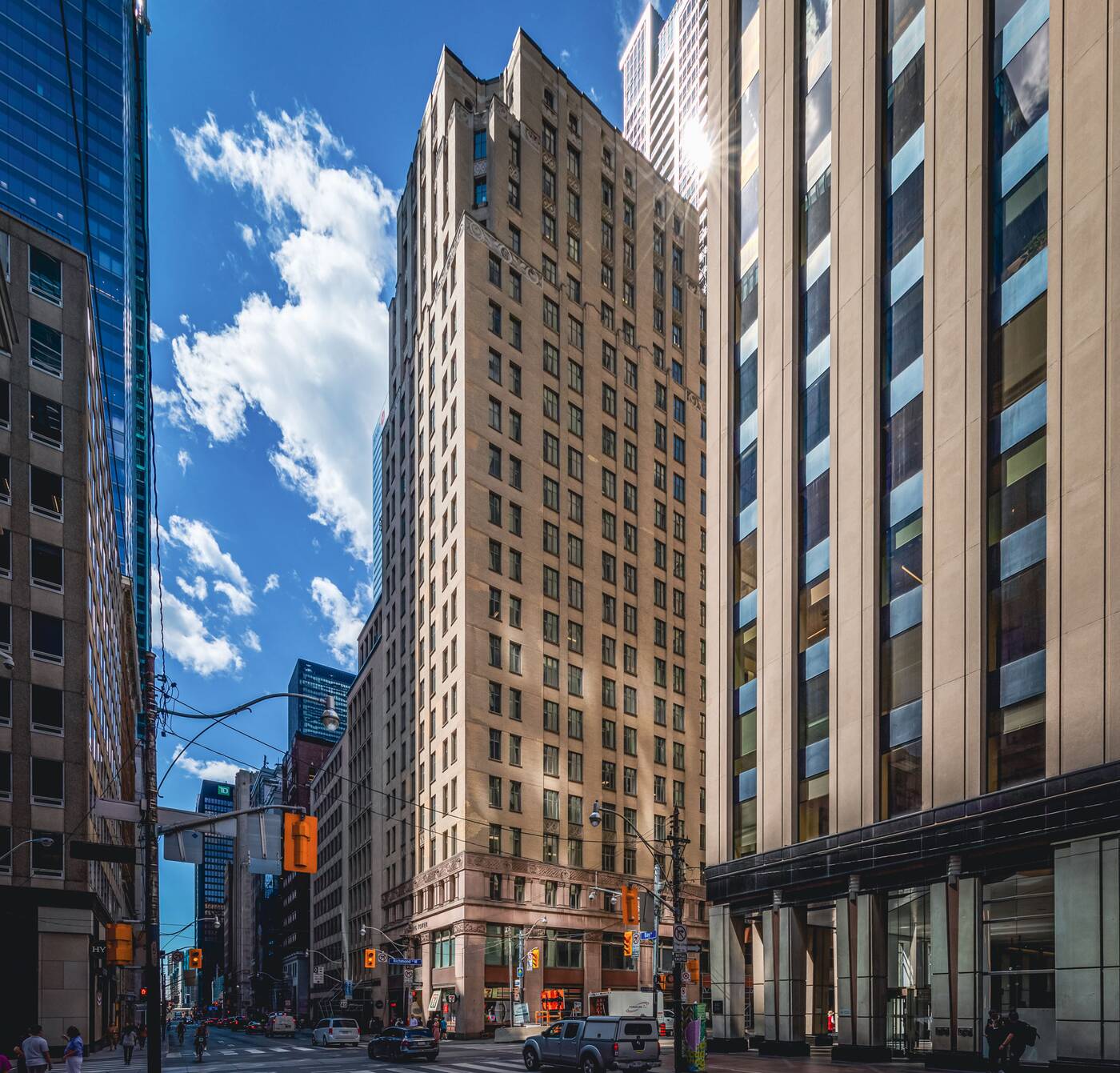 But this was a very short-lived honour; an emerging skyscraper race saw the title change hands three times in as many years in the late 20s and early 30s.

This next one needs no introduction, standing prominently at 100 Front Street West for over nine decades.

The Fairmont Royal York Hotel may not seem like a particularly tall building by 21st-century standards, but when it opened in 1929 it was the jewel in the crown of the Toronto skyline, and temporarily reigned as the tallest building in the entire British Empire. 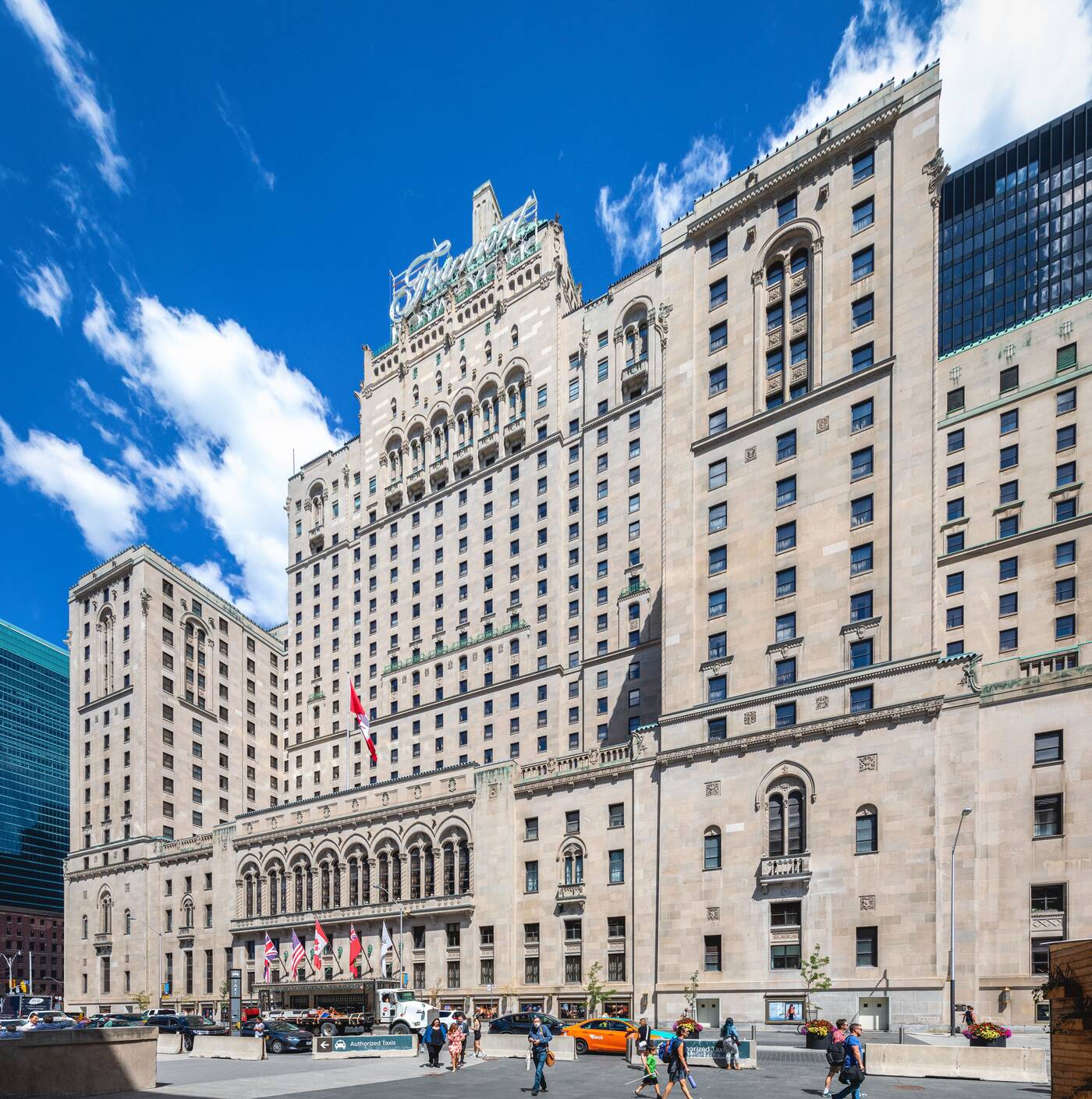 Toronto's grand railway hotel rises 28 storeys with a 124-metre pinnacle that still garners oohs and ahhs to this day.

But like other tall buildings of this era, its skyline dominance was short-lived, overtaken in height by the next contender just two years after opening.

The end of the Art Deco skyscraper boom happened with a bang in Toronto, giving the city its most significant landmark of the era.

Built as the headquarters for The Canadian Bank of Commerce (a predecessor to CIBC) at 25 King Street West, the ornate 34-storey office tower was the tallest point on the Toronto skyline from 1931 until 1967, soaring 145 metres above King Street.

It was also the tallest in the entire British Empire for almost three decades, losing that title to Montreal's Royal Bank Tower in 1962. 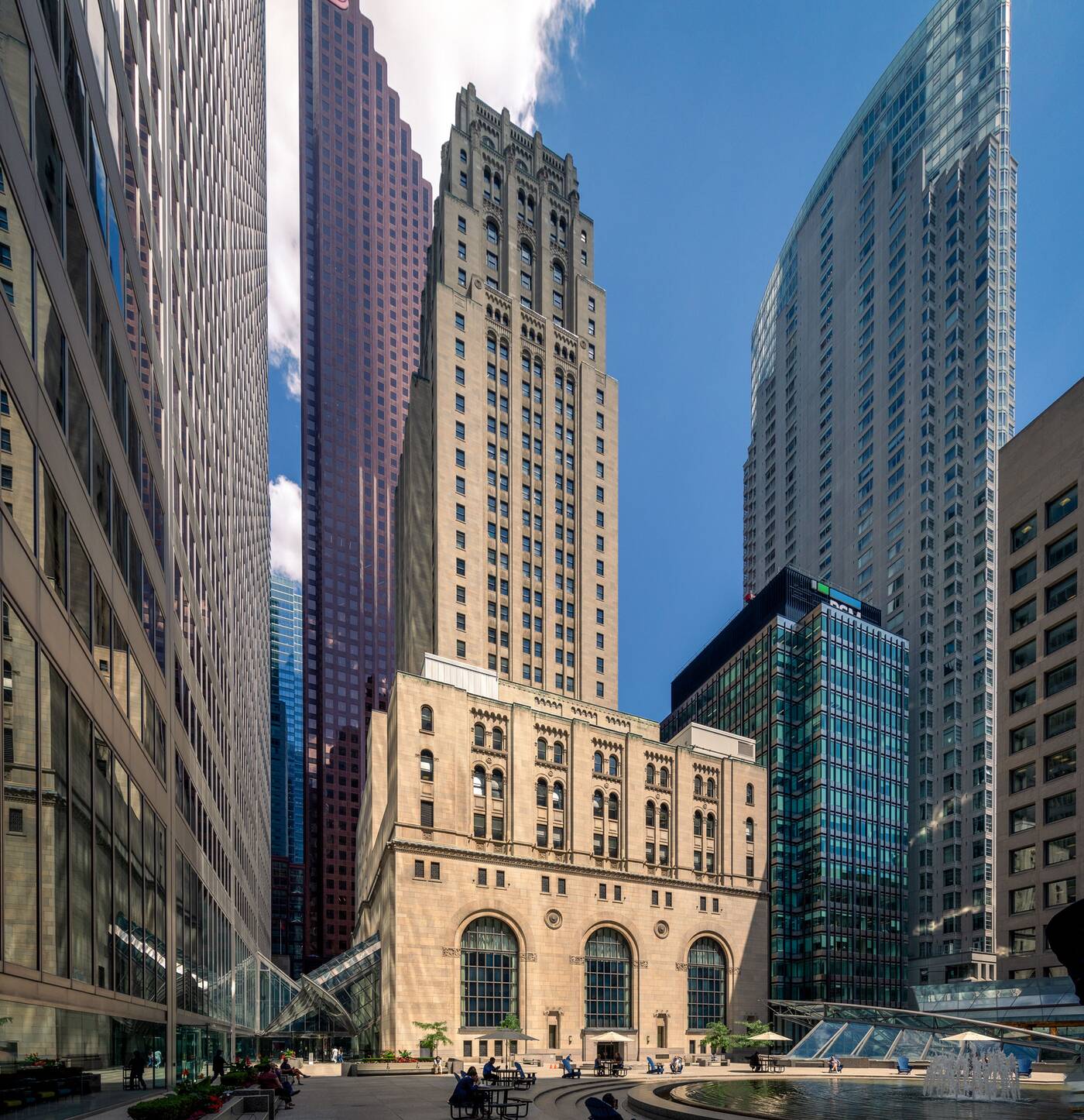 The building set a new standard for corporate headquarters in Canada with an opulent interior. Even now, 91 years after it opened, the tower's closed-off observation deck — originally open to the public — still holds near-legendary status among history nerds and urban explorers.

The term skyscraper has evolved throughout the decades as modern construction methods allowed developers to build taller towers for less moneu, but it wasn't until the mid-60s that the first modern office tower arrived in Toronto.

And damn, did it arrive in style. 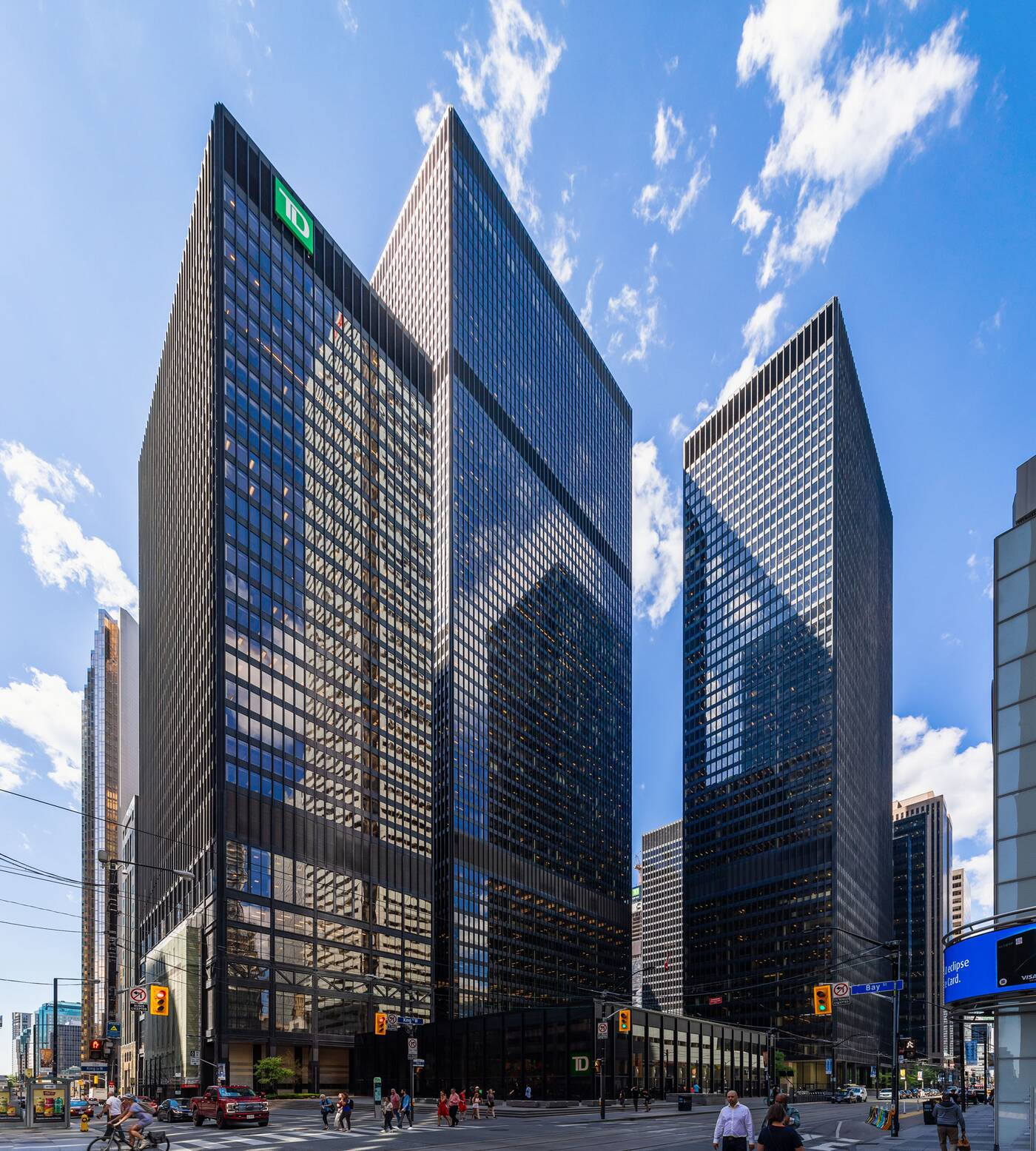 The 56-storey TD Bank Tower at 66 Wellington Street West was the first of six towers in a complex overseen by architectural legend Ludwig Mies van der Rohe in perhaps the best exemplification of his trademark Modernist spin on International Style movement.

When it landed on the Toronto skyline, its monolithic 223-metre stature dwarfed surroundings, but it was the spark that jump-started the evolution of the modern skyscraper-filled Financial District. 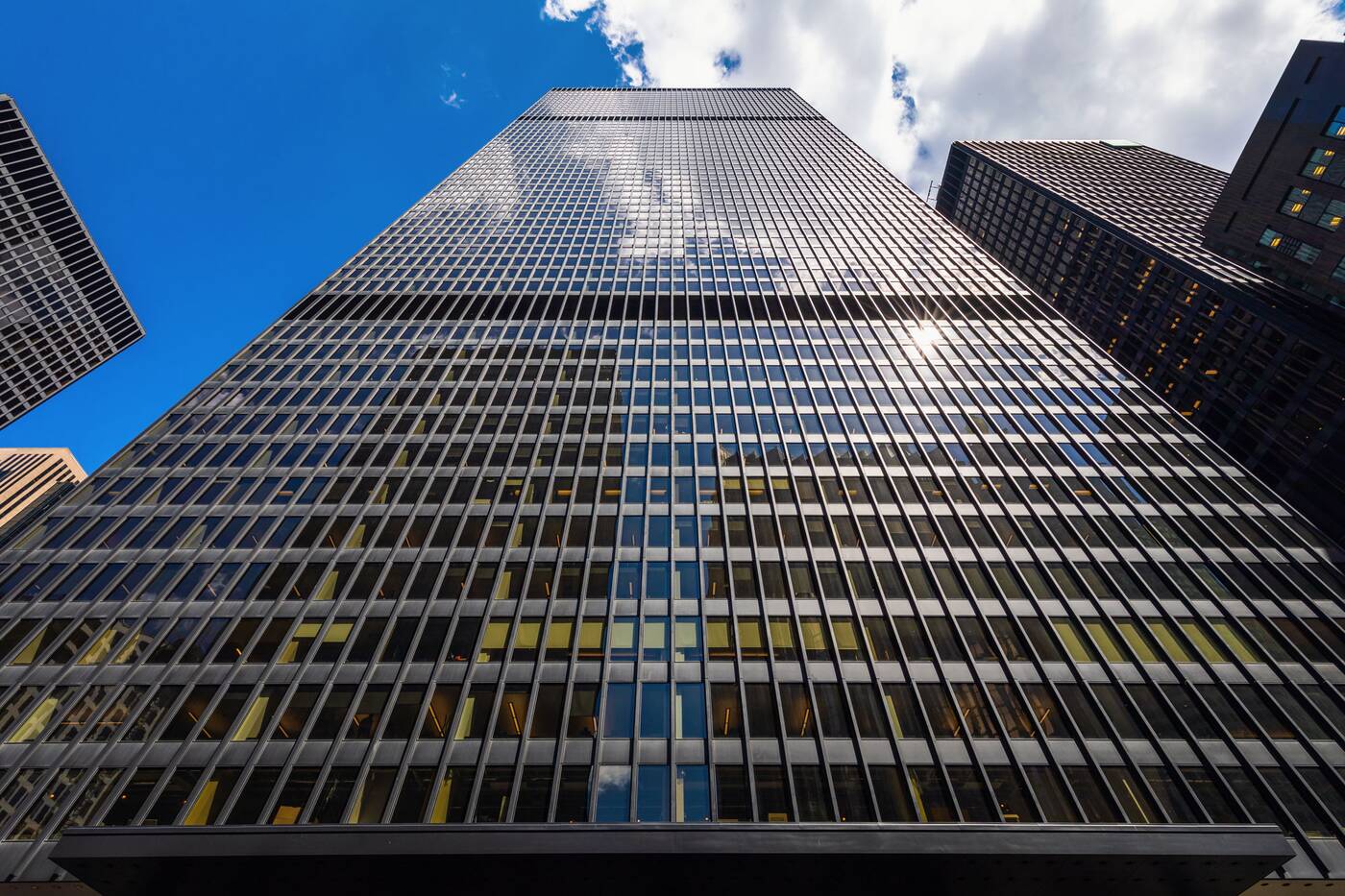 As influential as it was, the TD Bank Tower only retained its crown as Toronto's tallest for a brief period before being eclipsed by another Financial District titan in 1972.

Commerce Court North had lost prominence and relevance after the rise of these modern office towers, and after a merger between the Canadian Bank of Commerce and Imperial Bank, the newly enlarged corporation decided it would make a splash with a bold new headquarters.

They commissioned legendary architect I.M. Pei to design a new tallest building for the country at 199 Bay Street. The resulting Commerce Court West tower stands 57 storeys with a height of 239 metres, and was the tallest building around from 1972 to 1975. 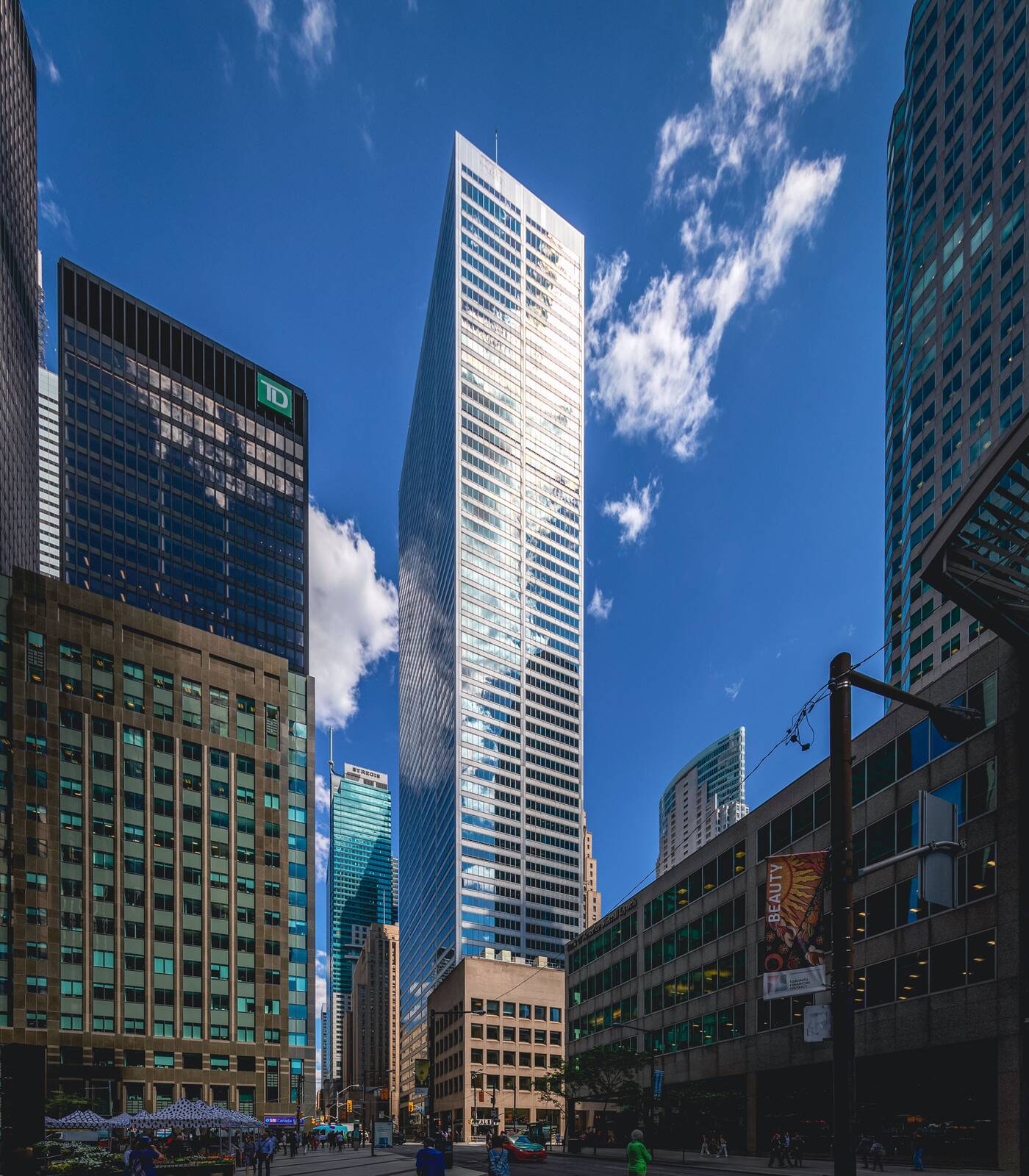 The complex was, at two different points in history, home to the tallest in the city. And the third time could be the charm, with the site owners working on plans for a tower that would rise higher than anything else in the Financial District, including the current-tallest building in Canada and next entry on this tour.

Since 1975, the 72-storey office tower has been the city's and country's tallest building with a height of 298 metres. 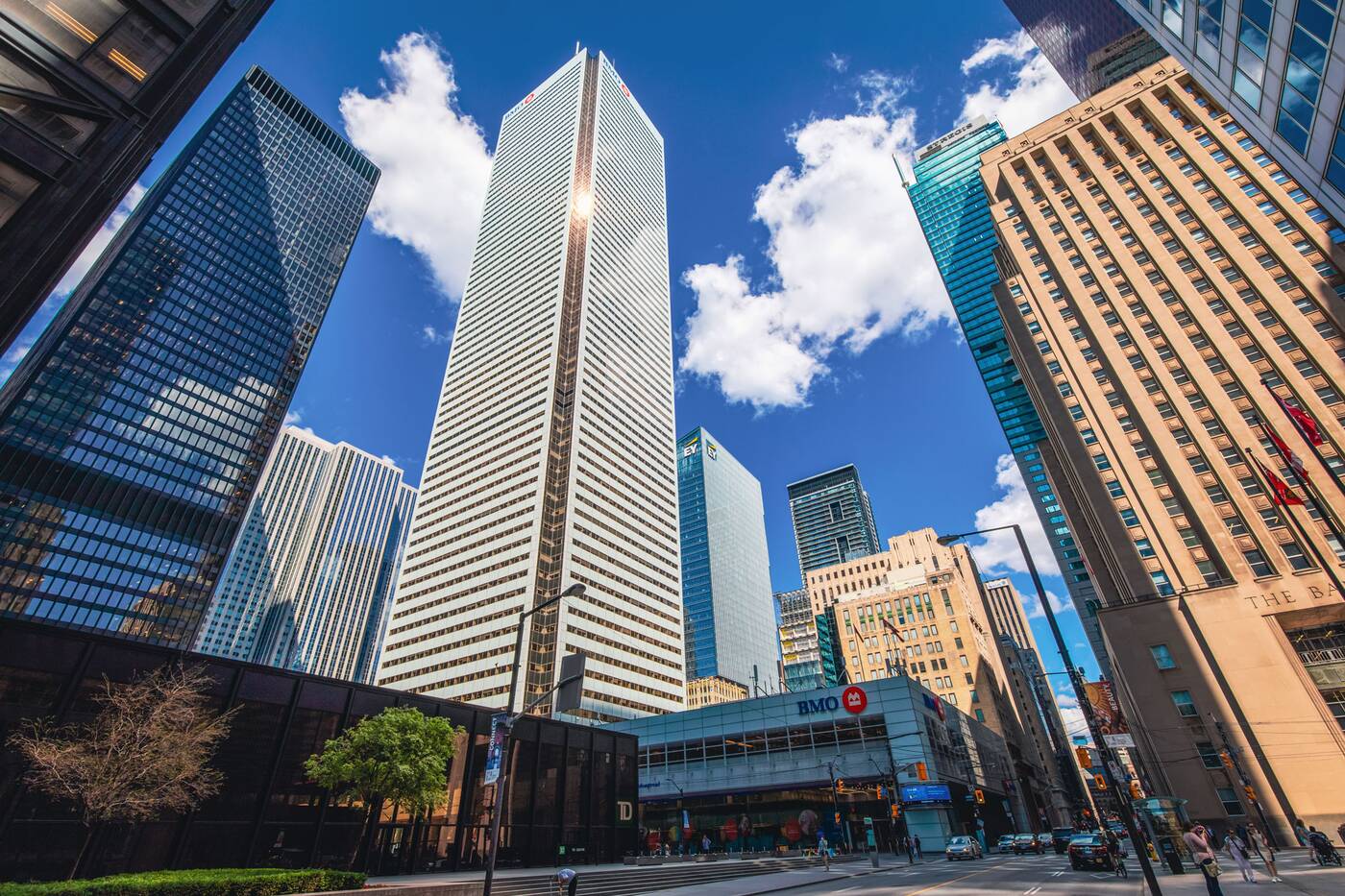 First Canadian Place holds the strange distinction of topping the ranks of tallest building in the British Commonwealth twice, from 1975 to 1990, and again from 1997 to 1998.

So how did this happen?

The short answer is a delicate geopolitical situation. The medium-length answer is the handover of Hong Kong in 1997, which removed the Bank of China Tower and Central Plaza from the Commonwealth, allowing the shorter First Canadian Place to briefly reclaim its title.

The tower has remained the unchallenged king of tall buildings in Canada for pushing five decades, though its appearance has changed through the years.

Its original Carrara marble exterior didn't age too well under harsh Toronto conditions, and was replaced with a modern glass finish in a reno completed in 2012. 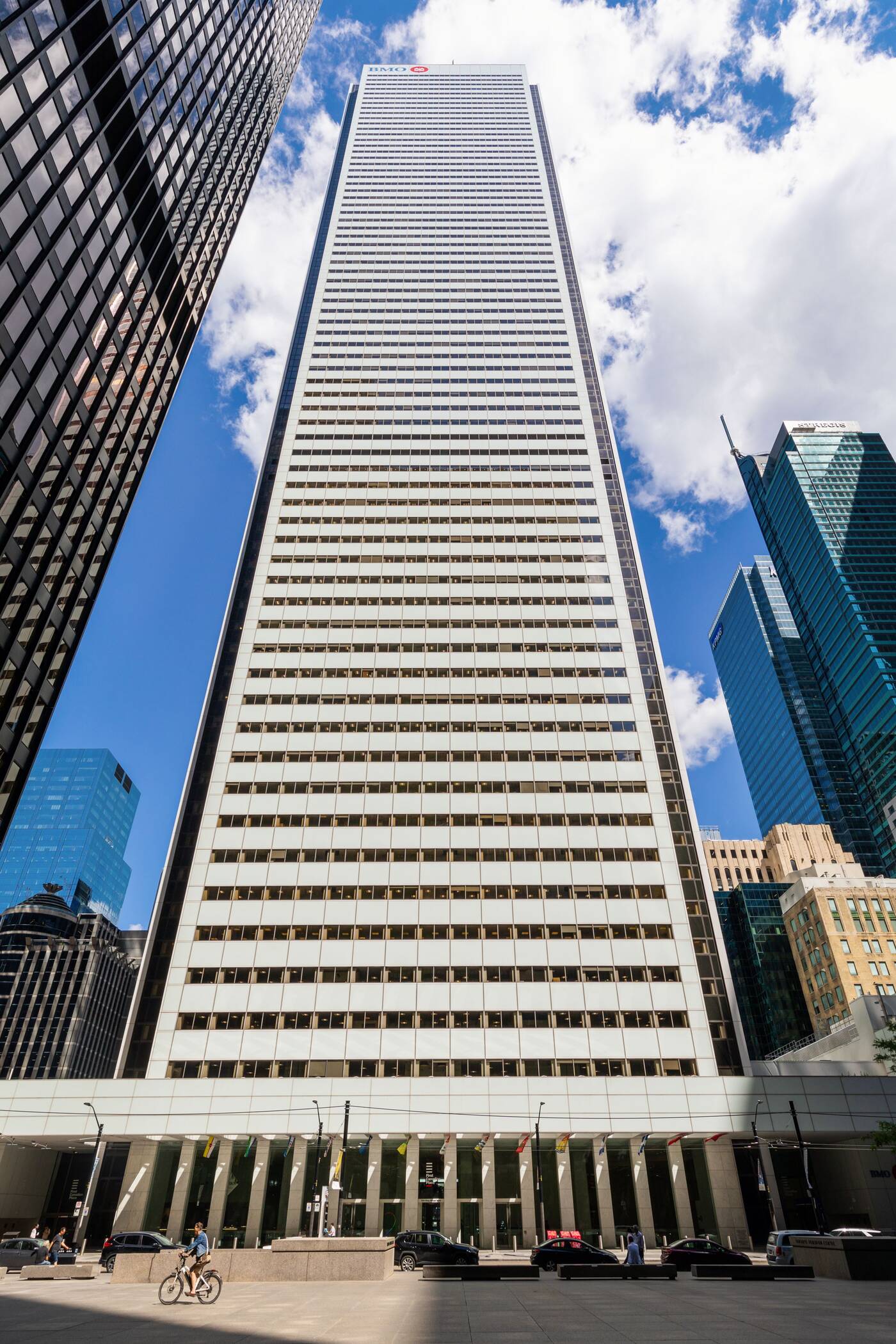 But it looks like First Canadian Place's reign will soon come to an end.

Multiple forthcoming towers are vying for the title of the new skyline king as a new era of super-tall skyscrapers lands in Toronto.