That time Toronto had streetcars going up and down Yonge St.

My earliest memories of the Peter Witt streetcars on Yonge Street in Toronto date from the 1940s. In that decade, the intersection at Yonge and Queen was the commercial heart of the city, as it was where Eaton’s and Simpsons department stores were located.

It was when my mother journeyed downtown to shop at Eaton's that I first rode on these streetcars.

Later, as a teenager, these cars became an integral part of my life as the major movie theatres were located on Yonge Street or within close proximity to it.

Also, Maple Leaf Gardens was only one block east of Yonge. In the 1950s, the theatres on Yonge and "The Gardens" on Carlton Street were among the most important entertainment venues of the city.

In past decades, people who lived west of Yonge Street rarely journeyed on the streetcars to areas east of Yonge. There was little incentive, since when you arrived at Yonge, the main commercial establishments of the city were readily accessible. 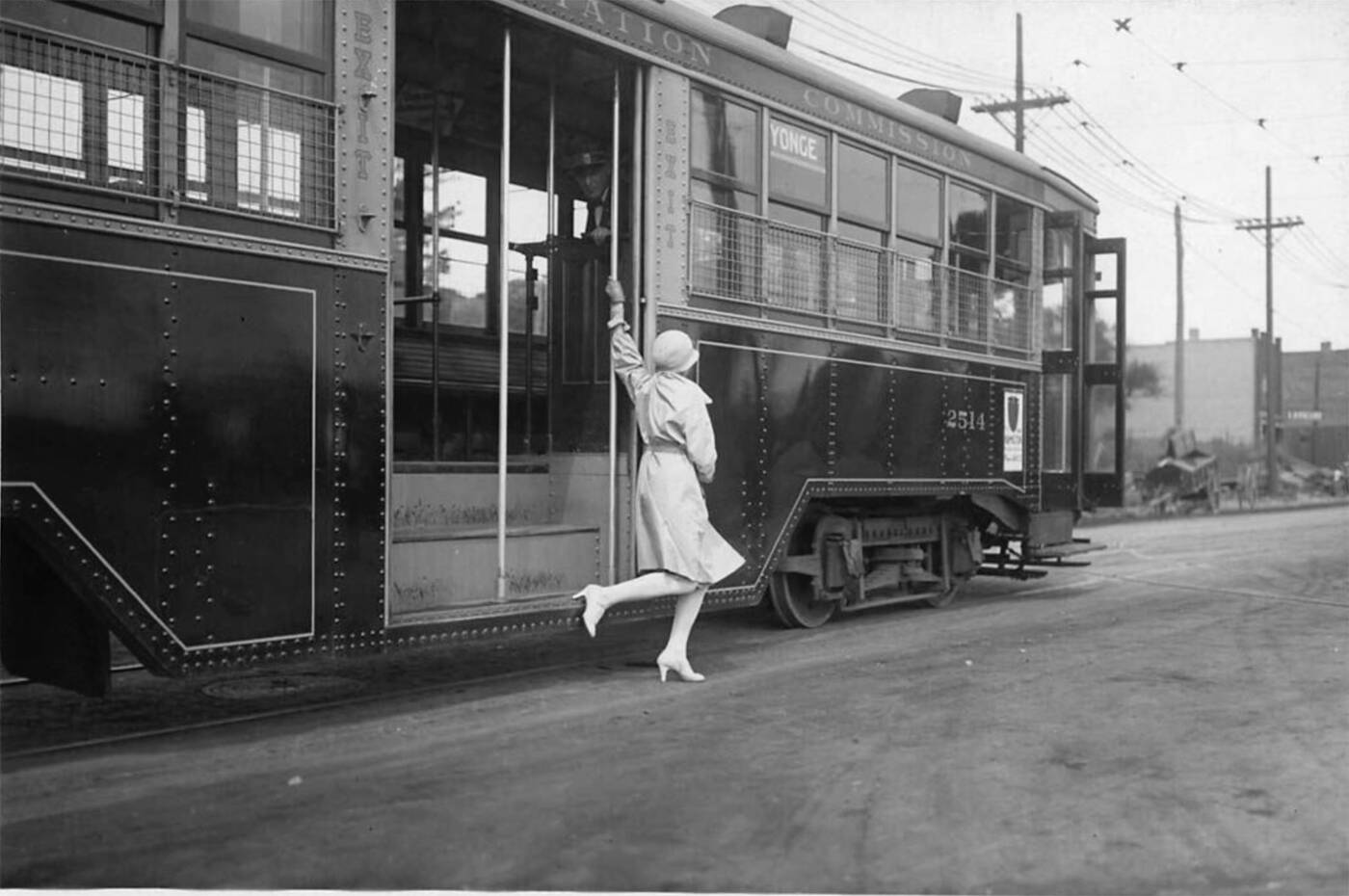 A passenger getting off a streetcar on Yonge St.

People who dwelt east of Yonge, similarly did not ride the streetcars west of it, for the same reason. However, everyone rode on the Yonge Streetcars. They were the best known and most frequently travelled in all of Toronto.

This is why it was logical in the late-1940s to begin building the city's first subway under the street.

The most famous of all the Yonge streetcars were the Peter Witt cars (1921-1963). They required two men to operate, but I seem to remember that in the 1950s, some of the smaller models, such as those on Bay and Bathurst Streets, required only one person.

On these, the motorman collected the fares. On the larger Yonge Street cars, passengers boarded by the front doors, which folded back when opened. 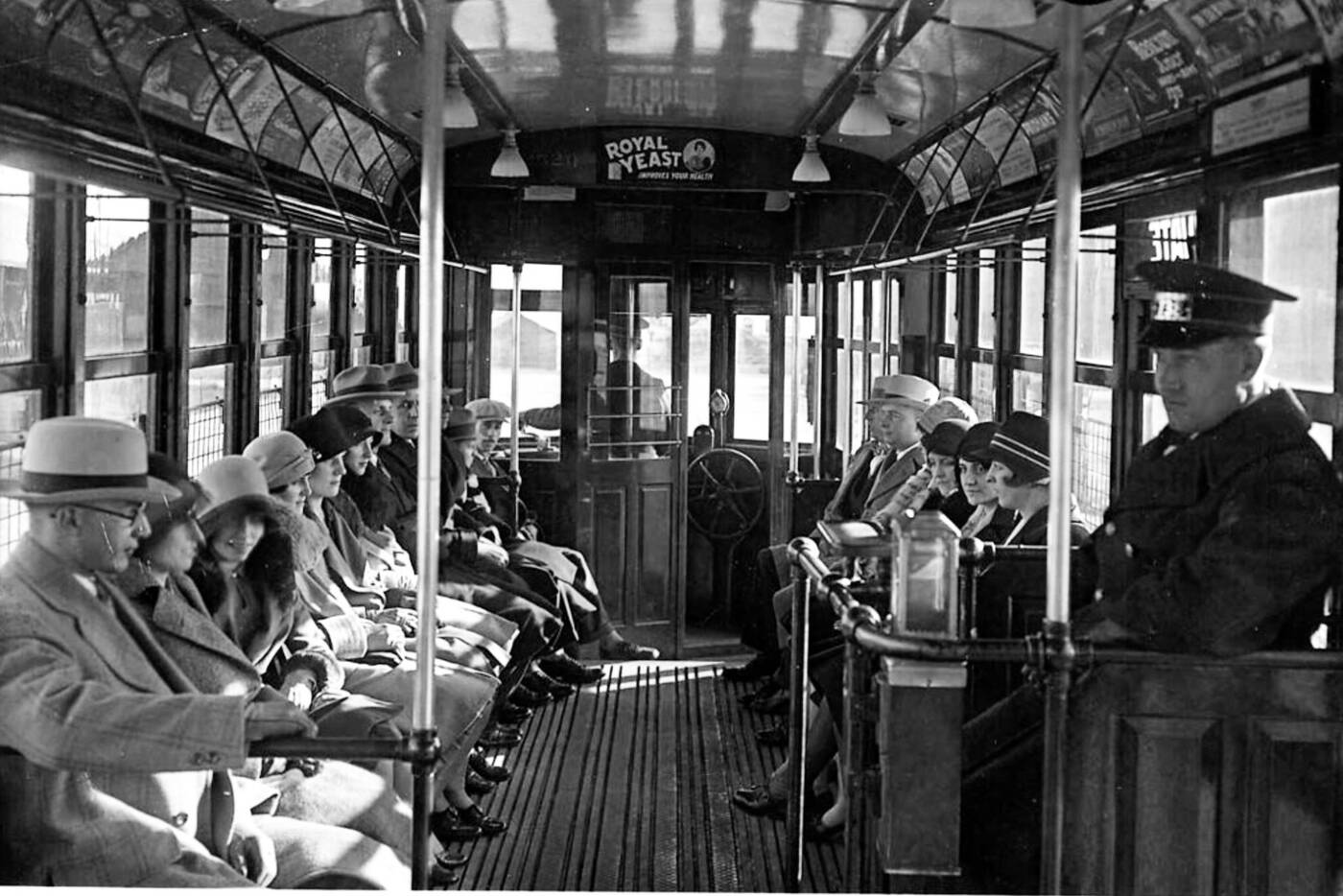 The driver (motorman) sat at the front of the car, but people basically ignored him, since he did not collect the fares. Behind the driver was a large box that in winter held sand to provide traction on icy streetcar tracks.

Passengers who sat or stood at the front of the car did not pay their fare until it was time to depart. Then, they exited through the centre doors, where the conductor sat.

People dropped their tickets or cash into the fare box located beside the conductor, and were given a transfer if they required one.

They then stepped down to the roadway. The centre doors did not fold back, but slid across to open. The conductor controlled the doors, and also maintained the coal stove that provided heat in winter. It was located opposite the conductor.

Passengers seated or standing at the back of the car had already paid their fare, so when it was time for them to depart, they simply exited via the centre doors.

When I was a boy, all the seats were covered with what appeared to be brown leather. I always pleaded with my parent to pass by the conductor and pay the fare. This was because I wanted to sit in the seat at the back of the car. It was huge, with large windows surrounding it on three sides, providing a panoramic view of the street. 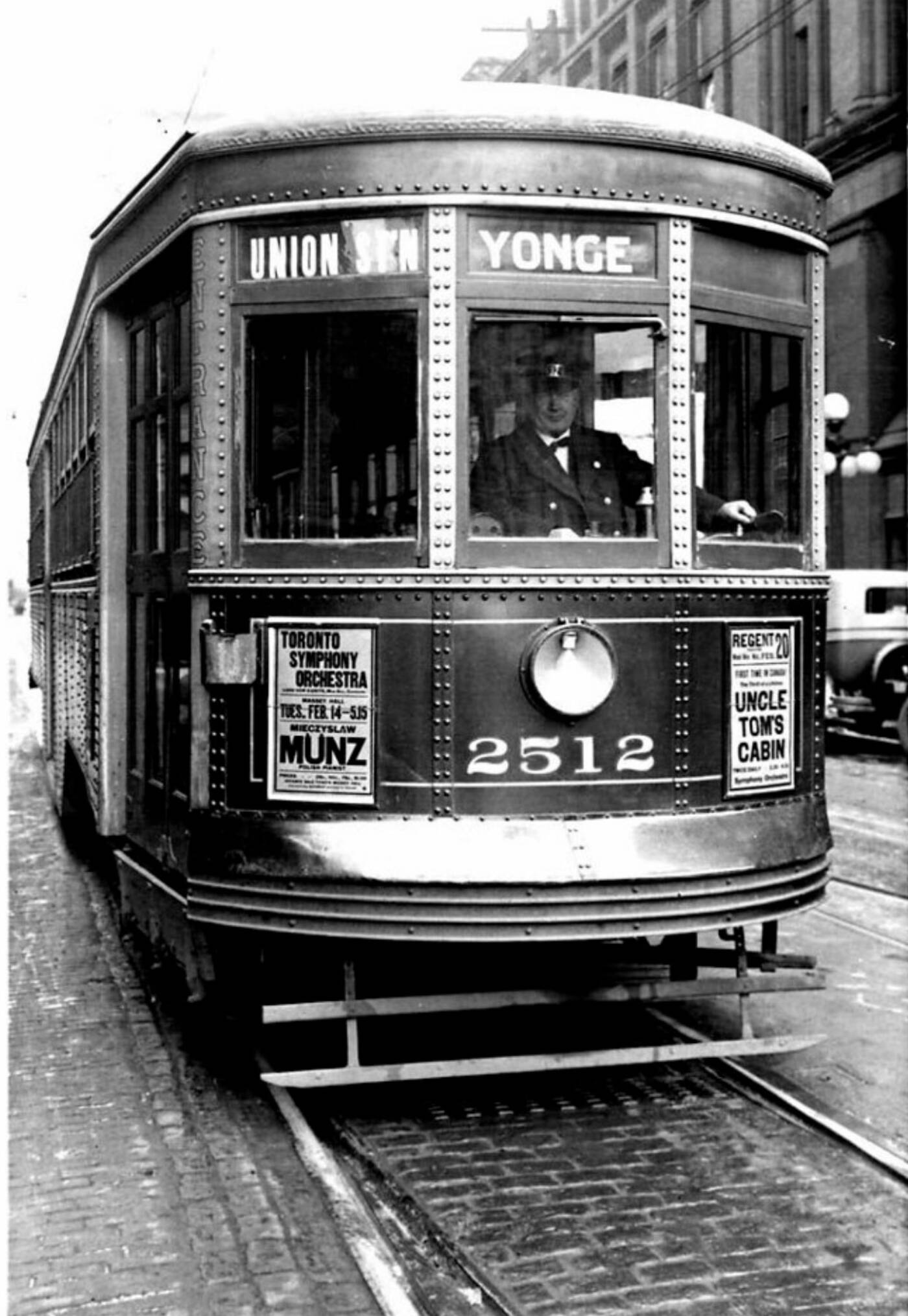 When I was a teenager, I preferred the window-seats, which were on the sides of the cars. Their windows provided a better breeze on hot summer days.

On the ledge of each window there was a small brass plate, and on it were engraved the words, "Keep Arm In." Teenagers invariably enjoyed teasing fate by sticking their heads out the window.

However, when another streetcar was approaching from the opposite direction on the other track, at the last moment they quickly pulled their heads inside. My parents continually warned me not to imitate the older kids. In winter, my preferred seat or standing space was near the stove.

The Peter Witt streetcars contained engines with sufficient power to pull a trailer up a steep incline. This was necessary, since the hill on Yonge Street, north of Davenport Road, was quite severe.

Trailers possessed two large centre doors that opened by sliding back. The door on the right was for boarding, and the one on the left for exiting.

Inside the trailer, there was a space between the two doors where the conductor sat to collect the fares. Similar to the cars that pulled the trailers, passengers did not pay their fares until they passed the conductor.

After arriving at Front Street, the Yonge streetcars looped around Union Station. Thus, many immigrants caught their first sight of the city from their windows.

My father arrived as a young man in Toronto in 1921, from a small village on Canada's east coast. It was the first year that the Peter Witt cars commenced operating in the city. He viewed them as modern and up-to-date.

When he departed Union Station and boarded a Yonge streetcar, it was a warm day in May. Despite the brass plaque on the ledge of the window, I am certain that he stuck his head out to gawk at the skyscrapers on Yonge Street, especially those between Front and Queen Streets.

The sight of the enormous Loew's Theatre (the Elgin), north of Queen, and the Pantages (the Ed Mirvish) caught his imagination. Years later, he told me that on that occasion he had vowed to visit them as soon as possible. An older brother, who had been in Toronto for several years, had told him about the "naughty" vaudeville shows.

For many decades, the Yonge cars were the main means of journeying to the St. Lawrence Market on Front Street. During World War 1 and World War 11, thousands of soldiers departed for overseas and returned home after the wars from Union Station.

Many of these men and women travelled to the station or journeyed away from it on the Yonge streetcars.

During the 1940s, I rode on them to attend the circus at Maple Leaf Gardens and to visit Santa Claus at Eaton's Toyland. When I was a teenager, I attended theatres such as the Tivoli, Imperial, Loew's Downtown, Loew's Uptown, Downtown, Biltmore, Savoy, Odeon Hyland, and the Hollywood via the Yonge cars. 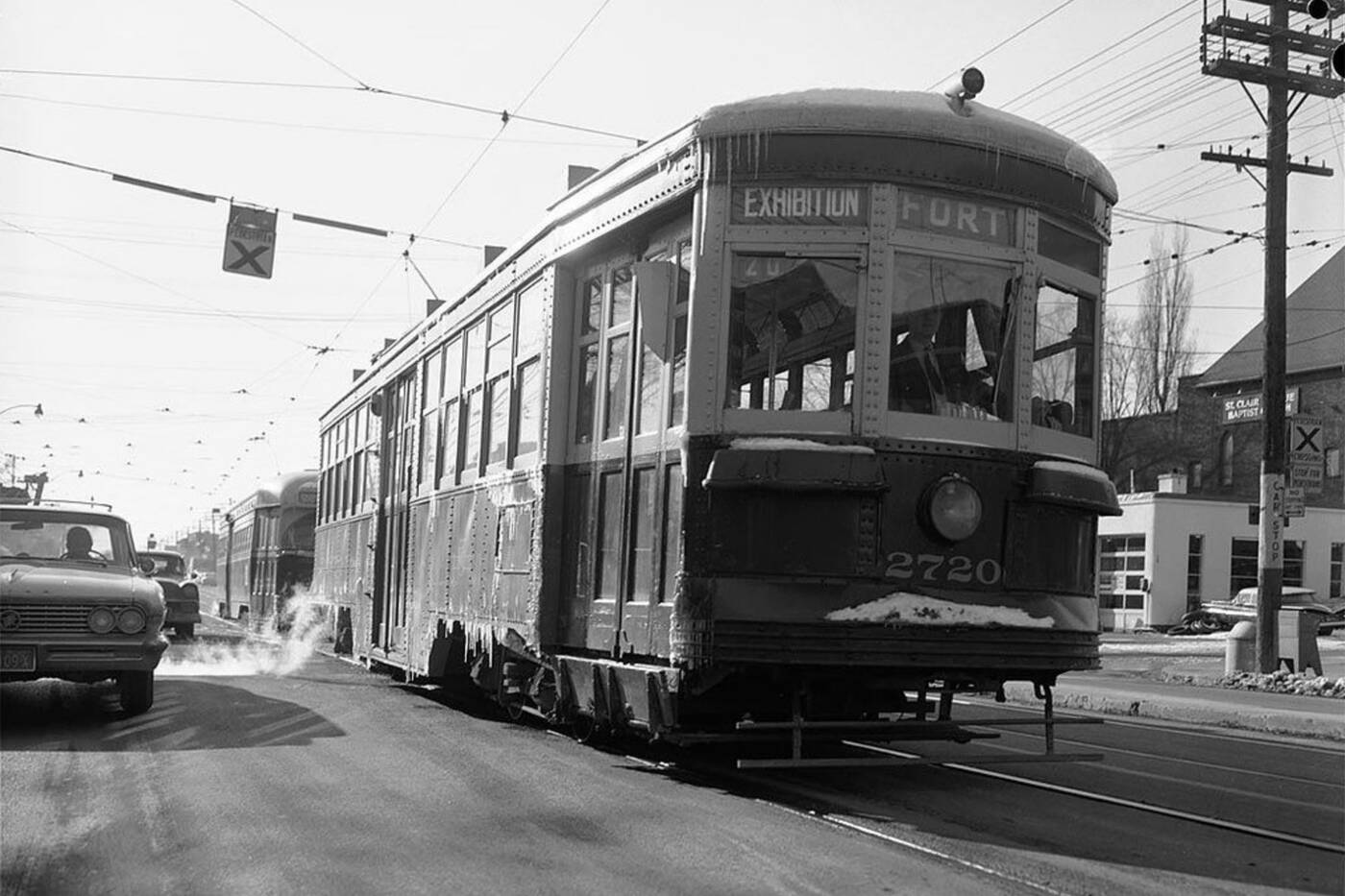 History of the Peter Witt Streetcars in Toronto

In 1921, Toronto's contract with the Toronto Railway Company for the transportation needs of the city ended, and it was not renewed.

City Council had realized that because the city was expanding rapidly, it was necessary to become more involved, so created the Toronto Transportation Commission. It purchased the streetcars of the former company (the TRC).

Several years before 1921, the city had been aware that many of the streetcars they would inherit were in poor condition. They began making plans and after careful research, they negotiated a license to allow them to place a contract for a fleet of Peter Witt streetcars.

They had been designed by a commissioner with Cleveland Street Railway Company, and named after him. There were seven different series, allowing for variations in size, but they all possessed a similar appearance—solid, square-shaped, with straight lines.

The cars were ideal for transporting large numbers of passengers on busy downtown routes. Their heavy steel bodies were well suited to Toronto's severe winters, and contained large windows for good ventilation on hot summer days.

They seated about 60 passengers, with sufficient standing room for many more. Toronto ordered 575 of the streetcars, 350 of them with engines. The other 225 were trailers that were pulled by the streetcars with motors.

The Canadian Car and Foundry Company in Montreal was given the contract and most of them were built by this company. However, 50 were sub-contracted to the Ottawa Car Company, and another 50 to the Preston Car Company.

To introduce Torontonians to the new streetcars, one of them was exhibited at the CNE in August of 1921. Their debut on Toronto streets was on October 2nd of that year.

The first streets to be converted entirely to Peter Witt cars were the busiest routes—Yonge, College, Dundas and Bloor. However, the Yonge cars became the most famous of them all.

In the 1920s, the cars had wooden seats and coal stoves for heating in winter. The brakes were operated by compressed air. However, in the years ahead the seats were upholstered with brown leatherette material, and the heating system changed to forced-air from electric heaters.

For several decades, the streetcars were the work-horses of the system. However, in 1938, the sleek Presidents' Conference Cars (PCCs') were introduced, which soon became known as the "red rockets." They slowly replaced the older Peter Witt cars.

The Peter Witt cars stopped serving the Yonge Street line on March 30, 1954, when the Yonge Subway opened. However, the last of these streetcars did not disappear until 1963.

After the Peter Witt car removed from service, they were stripped for useable parts and the remainder sold for junk metal.

Doug Taylor was a teacher, historian, author and artist who wrote extensively about Toronto history on tayloronhistory.com. This article first appeared on his site on August 30, 2016 and has been republished here with the permission of his estate. The article has been modified slightly.