Toronto's forthcoming Line 5 Eglinton (aka the Crosstown LRT) will undoubtedly make getting around the city easier for millions of people, expanding our current public transit network and reducing congestion on what is currently considered Ontario's very worst road.

Yes, it's late, and yes, construction of the new 19 km-long light rail line has been messing up traffic and hurting local businesses for far too long, but we're now really starting to see evidence that the project is nearing completion.

One such piece of evidence can be seen clear as day on Eglinton Avenue right now, just off the Golden Mile stop at Warden.

"Construction of the Eglinton Crosstown light rail transit (LRT) project continues to progress, and one of its latest milestones may have you seeing green," reads an update on the project posted by Metrolinx on Wednesday.

"Portions of the at-grade section, east of Brentcliffe Road, will feature green tracks to help integrate the new transit line with Eglinton Avenue's many parks and green spaces."

To put it simply, grass and foliage will be planted down the middle of the LRV route, bringing a pop of nature to what would otherwise be another sprawling span of concrete. 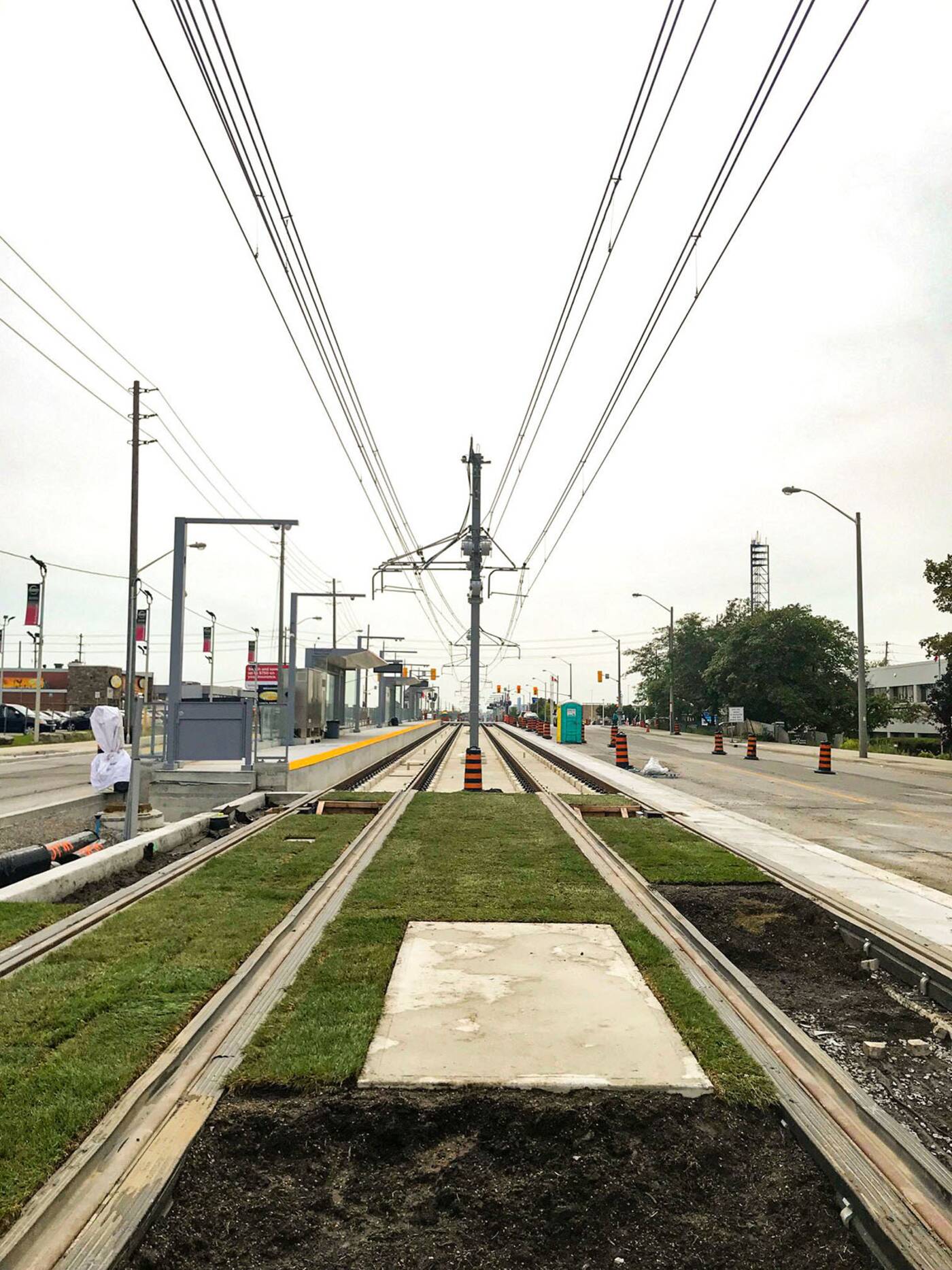 Green tracks can be seen all over Europe, where they're used to soak up water, damper sound and beautify the public realm. Image via Metrolinx.

Toronto is far from the first city to install green tracks. The National Association of City Transport Officials, which represents 91 major North American cities including Toronto, actually hails what they call "green transitways" as "one of the best examples of the coordinated pursuit of mode shift, water sustainability, and quality of life goals."

"Green transitways transform the character of a transit street, providing large planted areas along and between tracks or bus guideways," writes the association, noting that they "create an attractive human and natural environment, complementing transit investments in a cost-effective way."

And as much as they improve the public realm, Metrolinx's new green tracks are more than pretty: They also serve to lower temperatures in the summer, dampen sound, absorb rain to reduce run-off and minimize the spread of dust.

Each section of green track in Toronto will have its own irrigation chamber, water supply, and an energy supply to power the irrigation system.

The green track at the Golden Mile stop east of Warden Avenue is, for now, just a "mock up," according to Metrolinx. It runs about 16 metres in length and 92 square metres in area.

"The installation of each section of green track takes three months after the final design is approved," notes Metrolinx, which is constructing the line to be run by the Toronto Transit Commission. 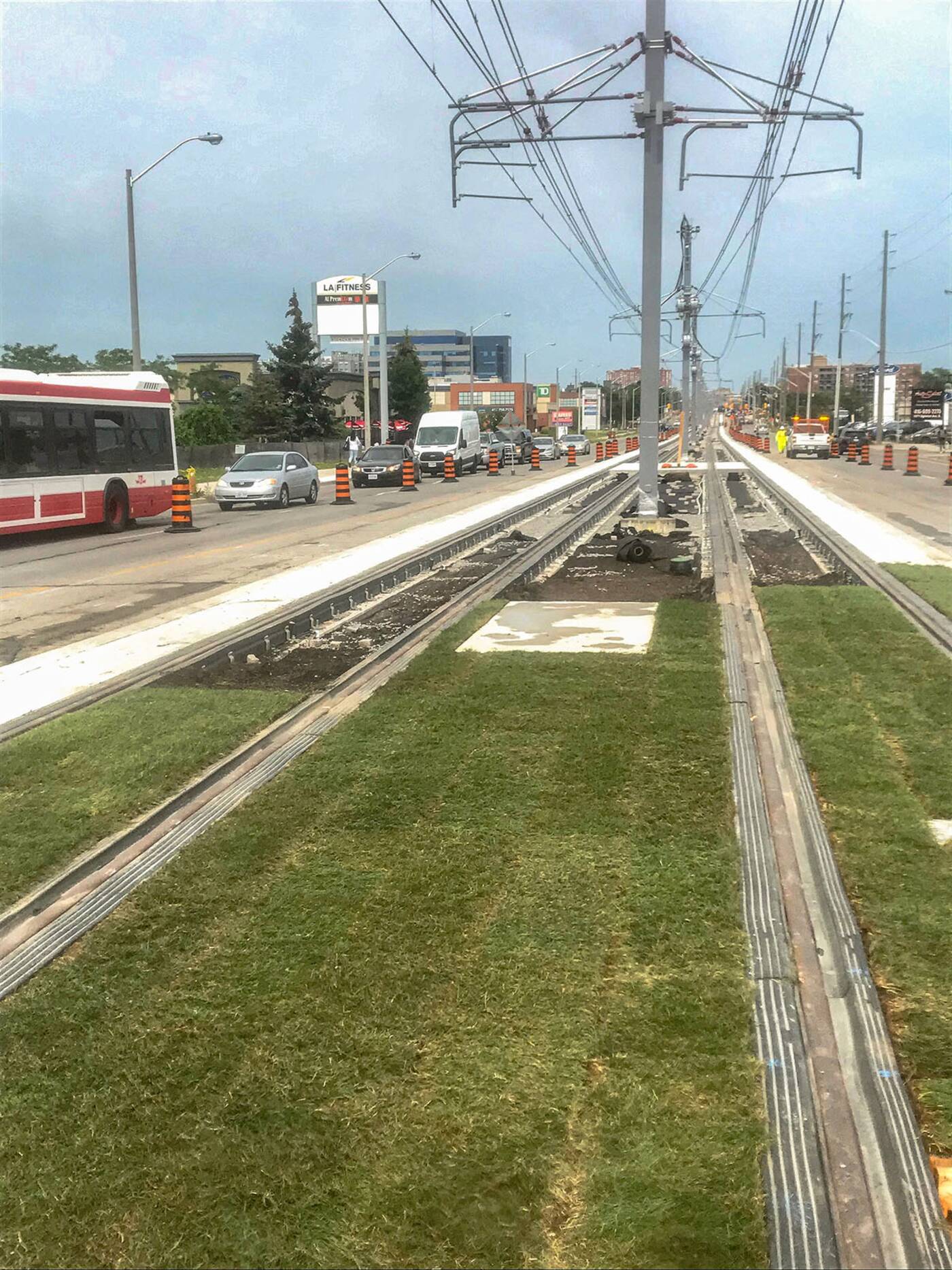 The grass currently on the tracks is serving as a mock-up. After the design is approved, something similar will be installed permanently. Image via Metrolinx.

By the time all is said and done (whenever that is), Toronto will have at least three stretches of green track along the 19-kilometre, 25 stop Eglinton Crosstown line.

All three will obviously be above ground, as opposed to beneath any of the 10-kilometres worth of track that will run underground, and exist predominantly between the Brentcliffe Road tunnel portal and Birchmount Road with paved gaps at intersections.