The province is working out the finer details of the plans for its biggest transit project, the $11 billion Ontario Line subway, including what the actual stations along the downtown route will look like and what major changes the surrounding neighbourhoods can expect.

Snaking from Exhibition Place to the Ontario Science Centre, the 15-stop, 16 km line will be the biggest addition to Toronto's transit system since the Eglinton Crosstown LRT — and though the massive undertaking is much-anticipated, it hasn't been without pushback.

One recent criticism has been about the "transit-oriented communities" that the province is building around each stop, which will provide the perks of tons of new housing, businesses and public realm improvements, but also serve to line the pockets of huge developers at the potential cost of some of the city's character, some would argue.

Does anyone seriously believe that the Ford govt wants to build transit and housing unless it benefits their big developer friends ?
Why are they rushing to expropriate the First Parliament Site in perpetuity ? @FoundryFriends @slnaspeaks @corktown https://t.co/THAVw567Rr

These communities will be pretty damn transformative and thus simultaneously exciting and scary, especially seeing as they're slated for already dense areas like Queen and Spadina or King and Bathurst.

Newly-released renderings for what these intersections will look like indeed show how drastically they'll be changing.

At the former of the two aforementioned intersections, the current historic building housing the CIBC on the northeast corner will be redeveloped into a subway station entry that will look notably different, but which will keep some heritage aspects of the 1840s facade intact. 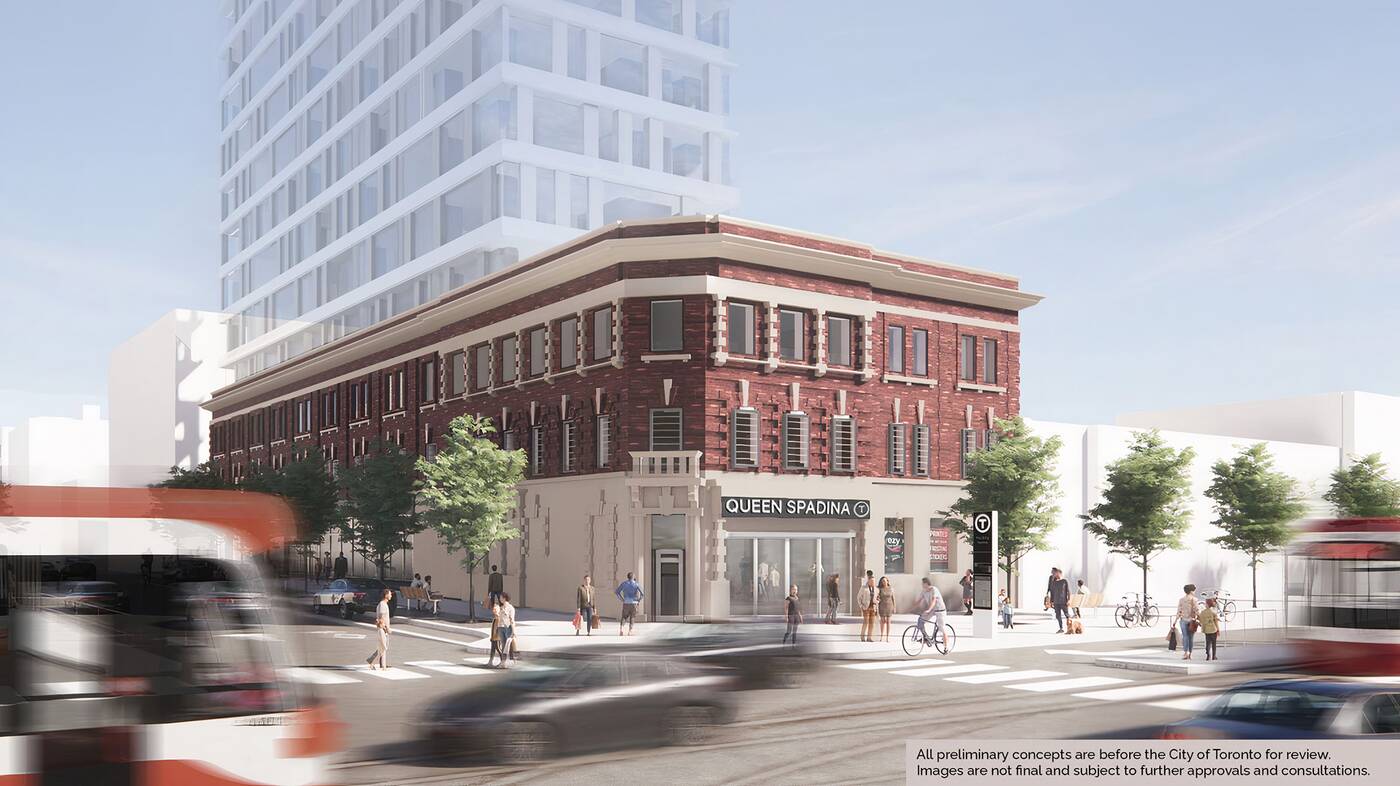 Rendering of what the northeast corner of Queen and Spadina, which is currently a CIBC, will look like as a subway station. Courtesy of the Province of Ontario.

Kitty corner, where there is currently a TD bank, another, notably more modern-looking entrance to the subway will live, and atop it, of course, condos to accommodate new residents of the ever-growing city.

(Toronto does indeed have a problem with housing supply overall, especially affordable housing and especially for those who take transit but live neither directly downtown nor at its more distant ends.)

As the province notes in a press release today, "these mixed-use, live-work-play communities would bring more jobs and housing closer to transit, helping to increase ridership, reduce congestion and stimulate economic growth." 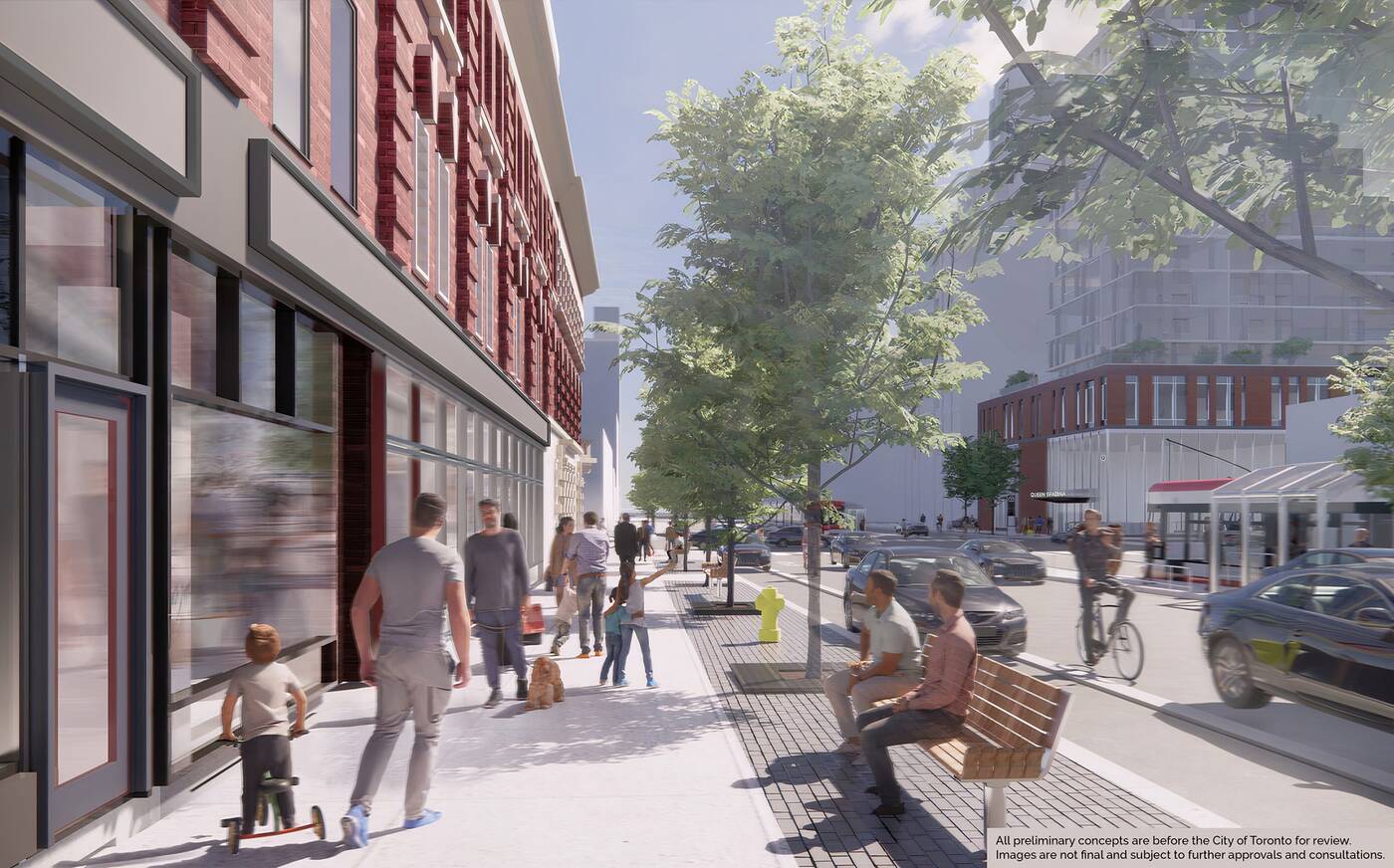 The future view looking southbound on Spadina, with entrances to the subway directly ahed and also kitty-corner on the southwest side. From the Province of Ontario.

But they will also significantly change the face of some of the city's busiest intersections — pretty unavoidable at this point, and perhaps worth it given the undeniably huge benefit the subway line and all associated development will bring.

The proposals are currently under review by the City, which will have some time to consider the suggested revamps of some of its busiest downtown corners — the Ontario line is set to break ground in 2023, with a tentative completion date in 2030.

I used a specific example, but the tweet is really just to poke fun at the absurdity of wanting more affordability and less density at the same time. They clearly cancel each out other out.

Other transit-oriented hubs are currently planned, as mentioned, at King and Bathurst, Exhibition Place, and around Corktown Station.

Aside from the few protests about the concept of vastly redeveloping neighbourhoods around Ontario Line stations, there have been concerns about portions of the line going above ground, the expropriation of surrounding homes and green spaces, and permissions that local residents will need to build projects on their own nearby property.