Meet the operations manager of the 519 community centre in Toronto

Toronto's Church-Wellesley neighbourhood, bustling and even ebullient in better days, has survived more than a year of COVID-19 lockdown measures, but not without loss.

Though a few of The Village's boarded-up storefronts have been infused with vibrancy thanks to local muralists commissioned by Church-Wellesley's BIA, its nevertheless difficult not to notice the toll the pandemic has taken on the neighbourhood’s businesses and community hubs.

Club 120 (née Goodhandy's), an important venue for many of the city's transgender women, closed permanently during the pandemic, after 14 years on Church Street.

Christopher Hudspeth, owner of Pegasus on Church and chair of The Village BIA, publicly posted an impassioned letter detailing his landlord's reticence to apply for Canada Emergency Commercial Rent Assistance, asking, "Can Pegasus survive or do we like several already on Church Street just throw in the towel and give up the fight?"

One venerable Village institution that has been able to continuously operate since the beginning of lockdown measures is Church-Wellesley's community centre, The 519.

A not-for-profit agency run jointly with the city, The 519 (pronounced "five-nineteen," unlike the southern Ontario area code) serves both its catchment area’s citizens as well as the larger LGBTQ2S population of the Greater Toronto Area.

Established in 1975, The 519 has persisted in providing digital and physical essential services to its communities throughout the pandemic. 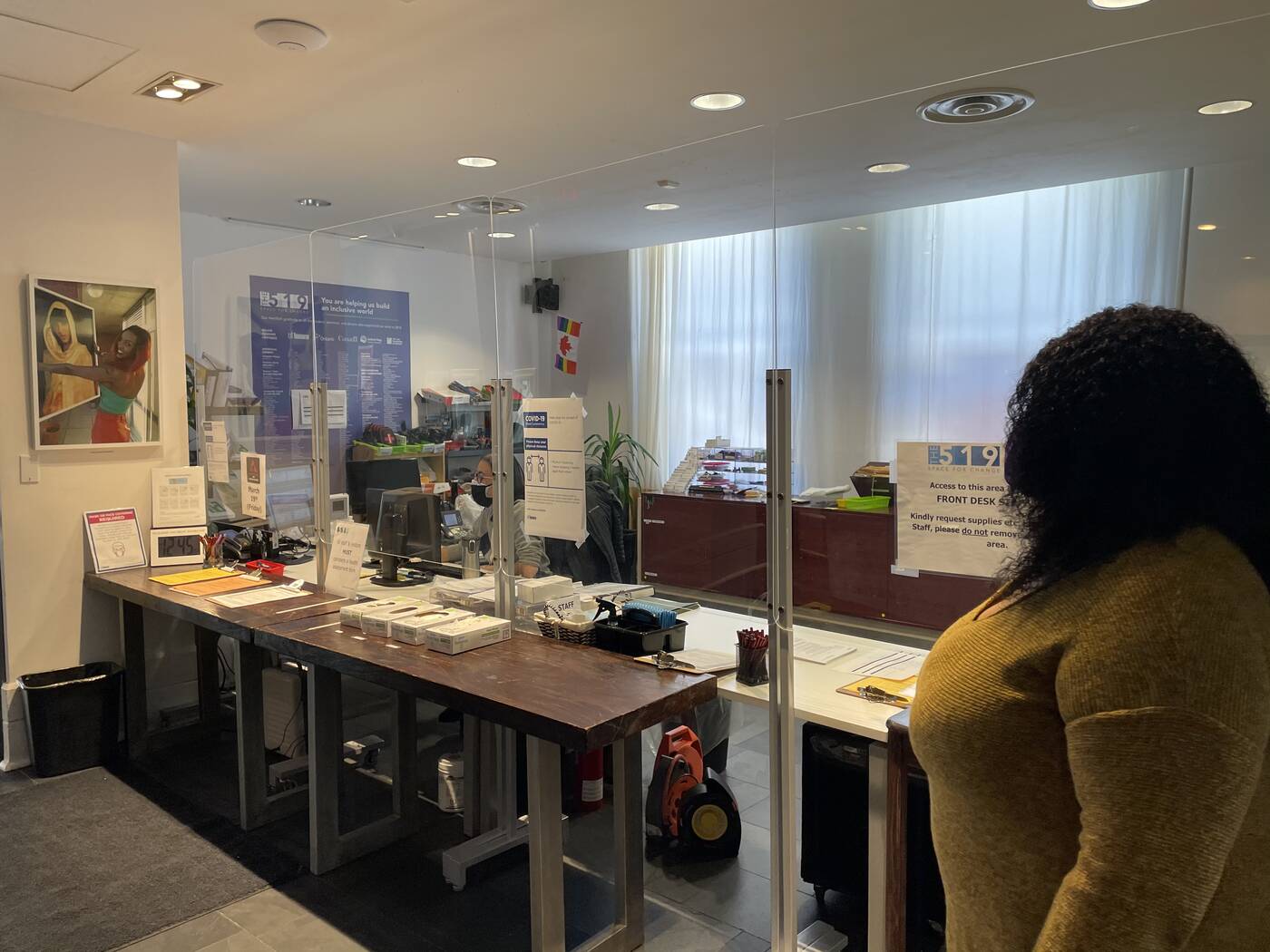 The 519's interior has been reconfigured to better keep its employees, volunteers and visitors safe.

Because of Toronto's extended stay in the grey zone, the normally bright and busy Salah J. Bachir Wing of The 519 is dark and dormant. Provincial mandate has closed the building to the public since November 2020.

It takes a lot of hand sanitizer (and masks, and gloves) to run a community centre during a pandemic - 📹 Mikhail Honoridez https://t.co/H6nTHKIXyA #Toronto #ourcommunityTO pic.twitter.com/uJdxBNqfdO

We speak in the building's Fireplace Room facing Church Street. Now serving as an improvised teleconferencing hub, the space is awash in natural light; the succulents by the window are thriving.

Williams-Clarke is radiant in her early fifties, and speaks with lilting confidence. She has worked in various roles at The 519 since 2010.

"This is my twelfth year of being in Canada" she says. "I came here as a refugee claimant from Jamaica. I was — still am — an activist in Jamaica for LGBTQ rights, as a co-chair of the only LGBTQ organization there then, J-Flag."

She says she felt threatened in Jamaica, which she describes as still quite homophobic. When she arrived in Canada, she took part in a newcomer program at The 519, and then began working there as a coordinator, eventually becoming  manager of the Among Friends program.

"Now, I've kind of shifted over and am now the Manager of Operations. I work with Community Access and Engagement, who are responsible for making sure that our community members know about and are supported by the services we offer." 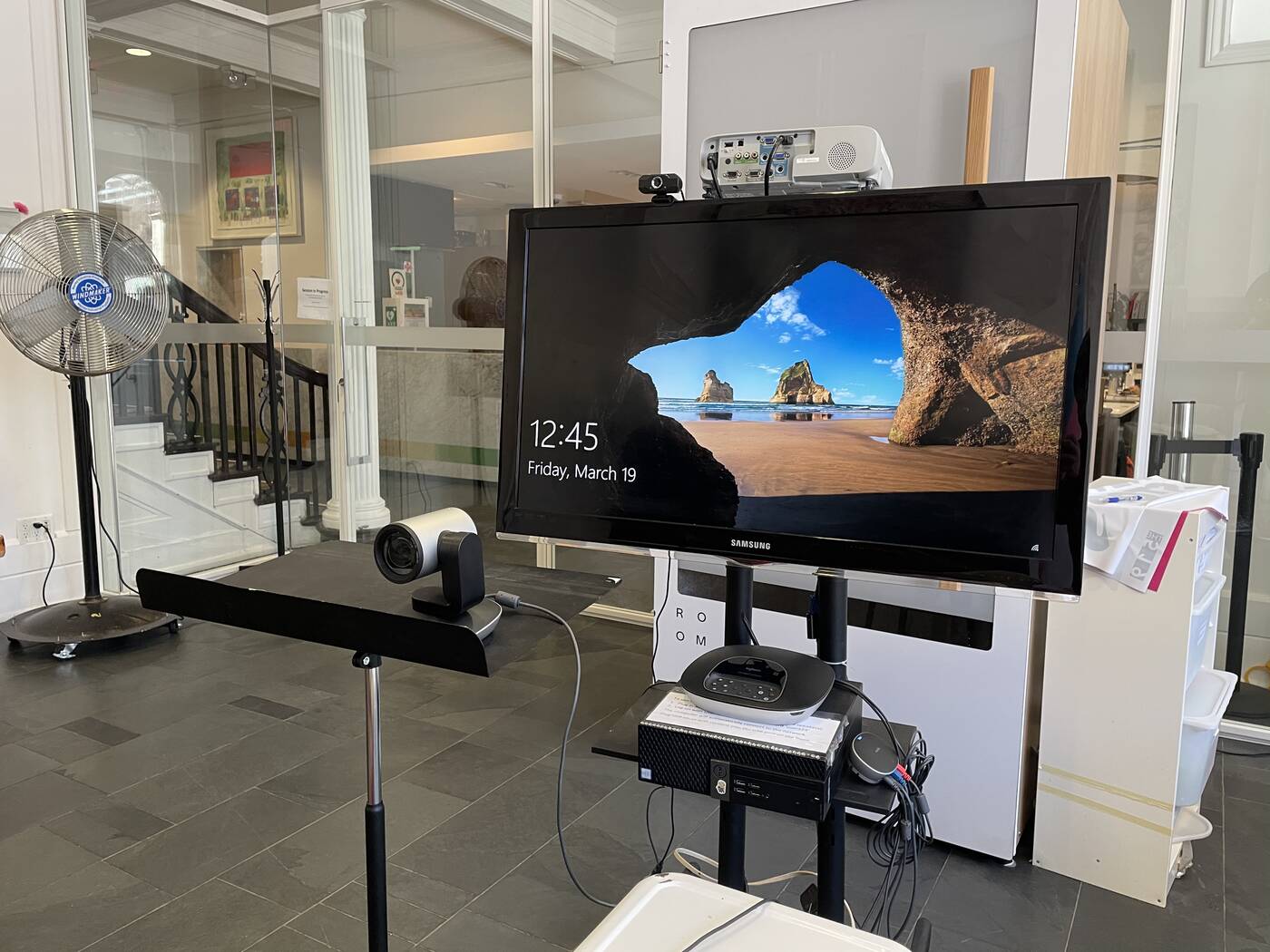 The 519’s Fireplace Room, normally a space for physical gathering, has been converted into a digital conference space.

The 519 is internationally respected for its newcomer and refugee-claimant support networks. Its newcomer and refugee support programming is intended to assist LGBTQ people fleeing countries with oppressive and violent attitudes towards homosexuality in finding housing, employment and community in the GTA.

"Among Friends is the largest refugee claimants group, I'd say, in Canada. Right now, we have four coordinators who work directly with newcomers. It started really small, about four or five years before I came to Canada, as a space where people would sit in a circle of chairs and just talk about issues, and then it started growing because of word of mouth."

"Pre-COVID, we had people come straight from the airport with their suitcases after hearing about The 519. We then first help them try to find housing. When I used to do this work myself, I would connect people to Ontario Works or Legal Aid, whatever services they need."

"Some people are coming from places where they can't even utter the word 'gay' or 'lesbian'. Toronto is a whole melting pot of cultures. It's easier to find the support that they need here than elsewhere."

Their job, she says, is not only to give them the support they need, but to make sure it's LGBTQ2S-friendly, whether it's social assistance, medical help, or just a shoulder to lean on.

"We try to make a place where people feel confident to be in, where they can be in contact with other people like themselves going through claims, getting support and information. Our coordinators take every care in the world to make sure that they are getting taken care of."

"Because I have the lived experience, I'm always putting myself in other people’s shoes."

Williams-Clarke also sits on the board of Rainbow Railroad, another not-for-profit organization focused on helping LGBTQ people escape violence and persecution in their countries or origin. 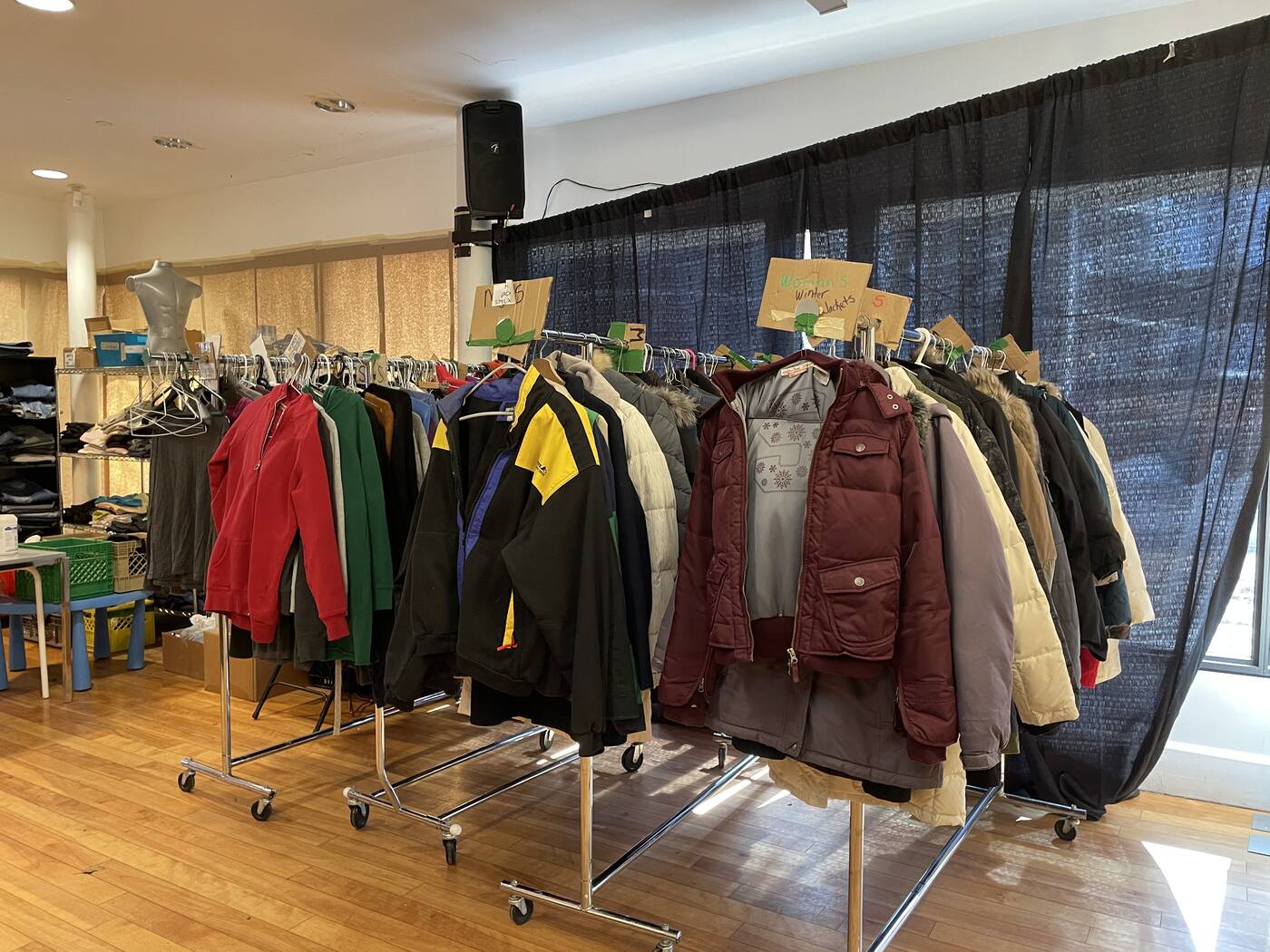 The 519 operates a robust clothing exchange and donation program. They’re always in need of large-sized shoes and accessories.

Besides newcomer settlement services, The 519 seeks to meet many of its community's other needs. Williams-Clarke takes a second to think before listing a litany of services offered by the community centre to LGBTQ2S people and others that includes a tax clinic and EarlyON education programs for children and their families.

"We have programs that focus on connecting with older LGBTQ people and with our trans community, especially trans people of colour, like helping those who are experiencing poverty or homelessness with IDs and name changes," she says."We do legal clinics, counselling and sports."

"Tons of community-led groups also use our space for meeting. We try to support everything LGBTQ."

Food is a fundamental part of  The 519's mission. Williams-Clarke says that whatever program people have signed up for, they always get a meal.

When most other places shut down at the beginning of the pandemic, The 519 stayed open to provide meals twice a day for those who needed them. And since they were forced to close, people have been able to sign up to collect frozen food every Sunday to last them the week.

And when their own cafe had to close, they partnered with Second Harvest, who give them the raw ingredients the staff uses to cook the meals.

Williams-Clarke says they're handing out 1,500 meals a week. 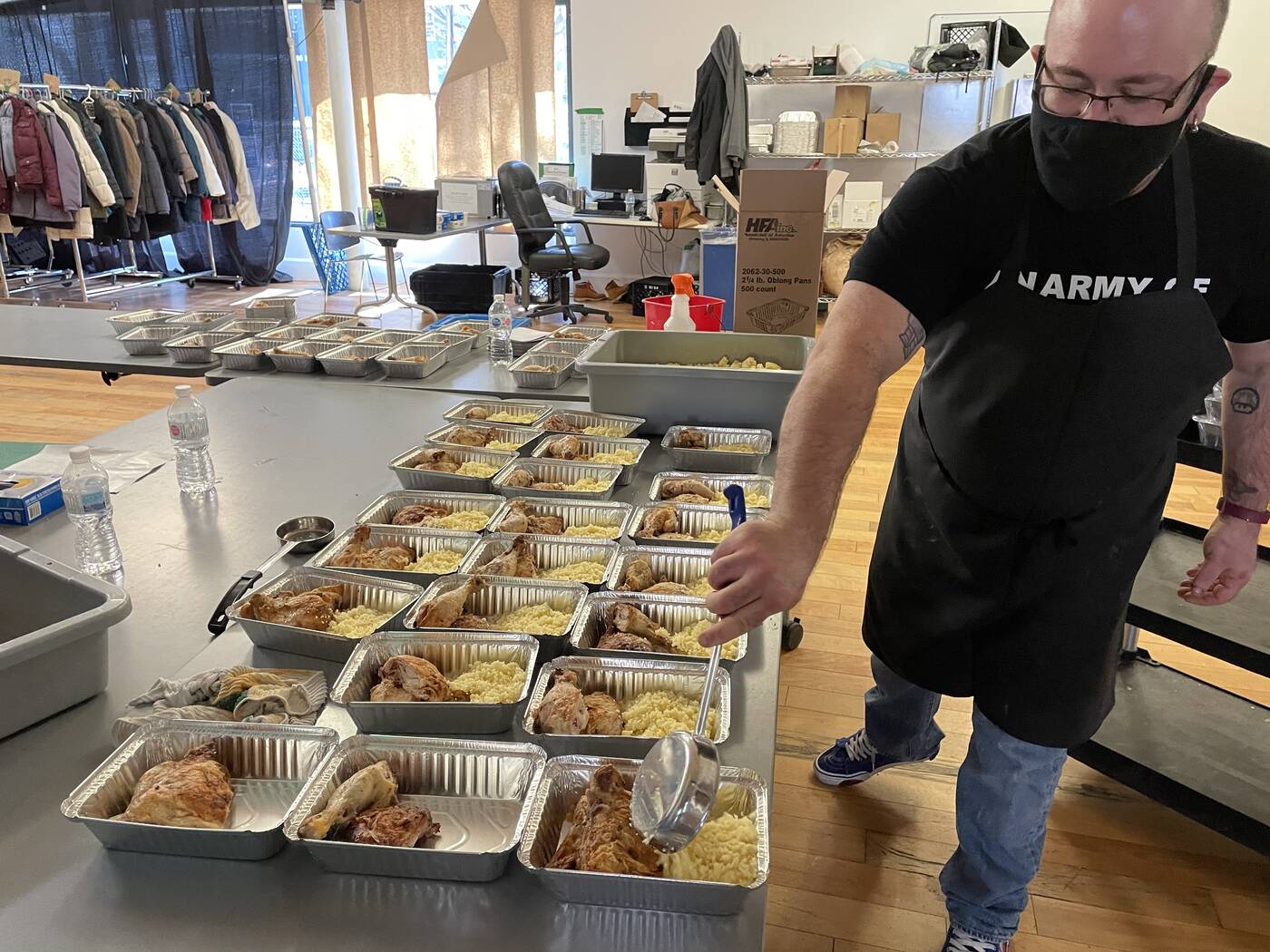 Carl Kennegiesser, manager of The 519's Community Engaged Food Programs, prepares meals to be frozen and distributed to those in need.

"There are a lot of homeless LGBTQ people in the city, especially among our transfolks. We have a housing coordinator who works with people to get them housed, whether temporary like the hotel system or more permanent by working with Streets to Homes."

"Not everyone will do well in government-assisted housing. So we have to plan and look ahead to see what will best suit the individual, where they at least have some nights where they have a place to rest their head."

(The 519 faced criticism in 2017 for perceived systemic prejudice towards the city's transgender poor and underhoused, specifically for mishandling information they received regarding the discovered body of an unhoused transgender woman later identified as Alloura Wells.)

Williams-Clarke says she's seen The Village change in the 11 years since she arrived. The condos have brought a different demographic to the neighbourhood, and she says it's not just gentrification that's bringing the change she's seeing. The neighbourhood that's been for decades so closely identified with the LGBTQ2S community is fast becoming a good deal less LGBTQ2S.

"There have been significant changes in the people that I see accessing our services," she says. "All we can do is make The 519 a place of refuge, where people can get support without anybody turning their nose up at them, like an oasis in the middle of the desert."

"It's not a one-size-fits-all solution for everyone. We have to listen to the people affected, so that better solutions are able to be created." 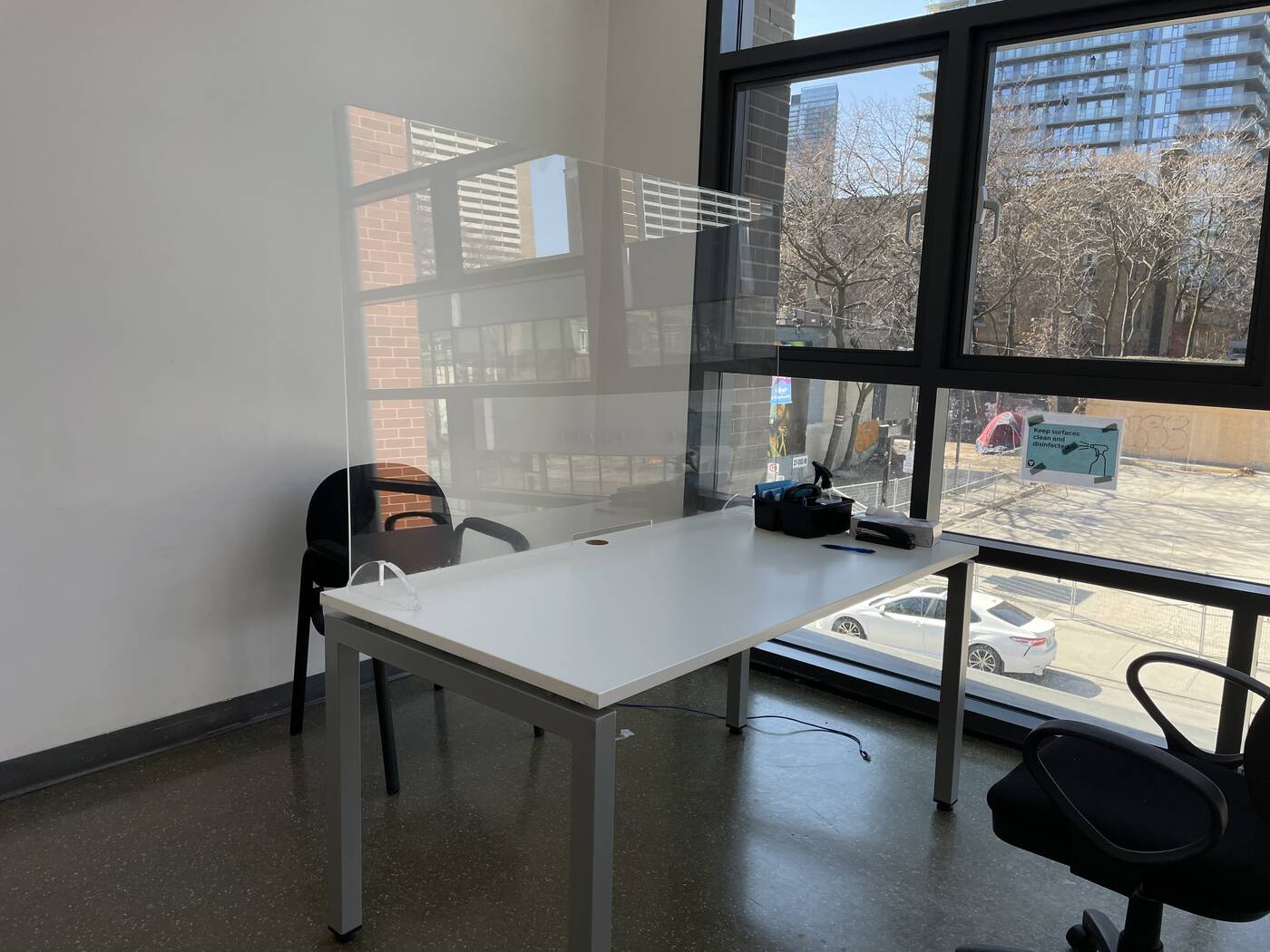 Plexiglass barriers have been erected and sanitary materials strategically positioned to allow The 519’s staff to speak with visitors safely.

Though The 519 has been able to continue to offer much of its programming digitally, Williams-Clarke longs to reopen the venue to the public for in-person activity, for the community's sake, and her own.

"I’ve been lucky, knock on wood. I’ve stayed safe. But I’m a people person.... It feels strange, not having this place full of people going in and out. I’m lucky to be able to get out and come to work and just be busy. I don’t like staying home. Isolation is difficult to suffer."

Not one to stay idle for too long, Williams-Clarke also devotes time to moderating the Women for Women Facebook group.

"Back in Jamaica, I always ran groups, so sometimes things like this just automatically fall on me. It gives me a chance to connect with friends that I have not seen in a long time, and make new friends from around the world." 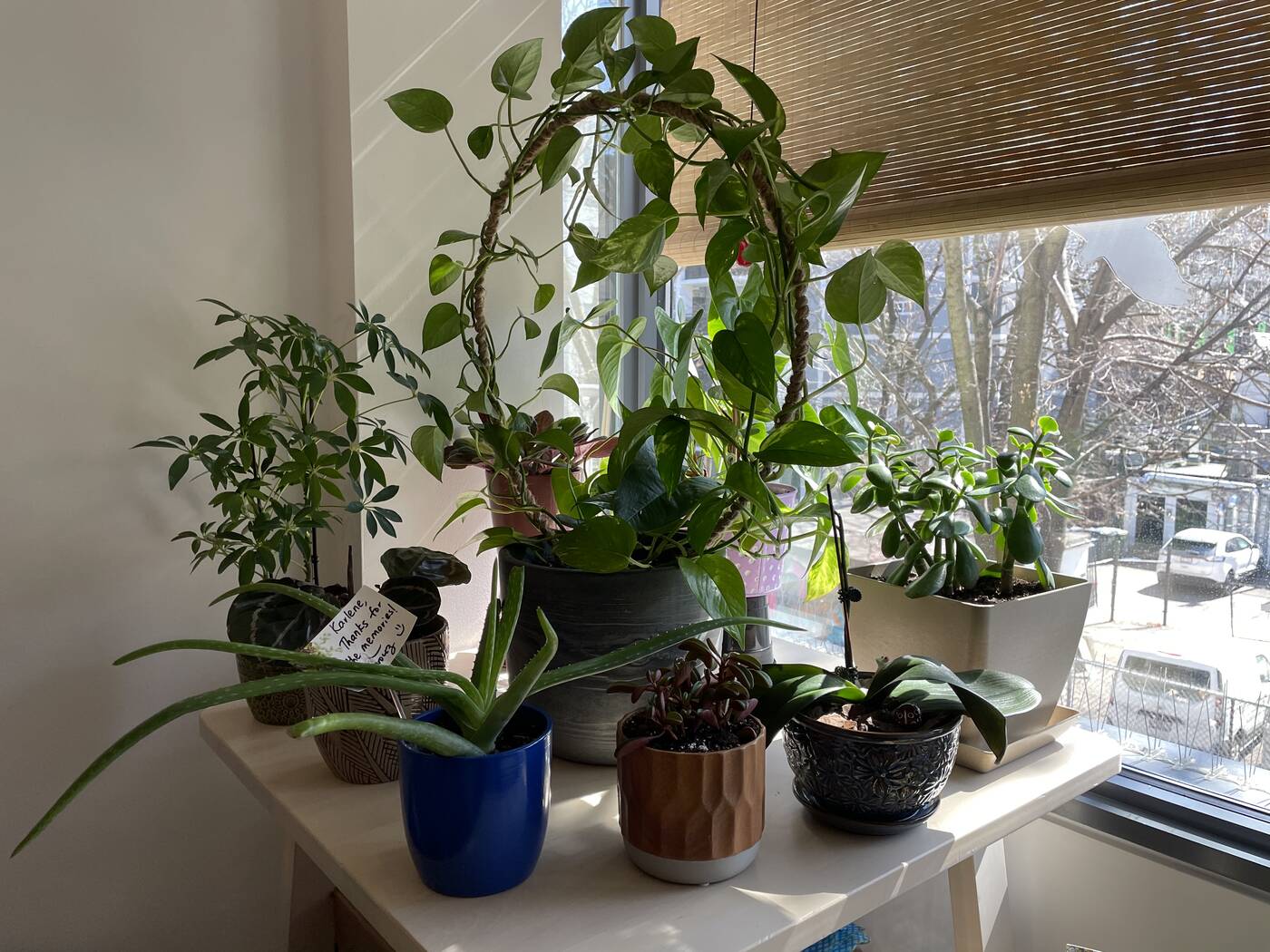 The collection of plants Williams-Clarke keeps in her office.

When she is not at home or at work, Williams-Clarke likes to go for walks around her neighbourhood, St. James Town.

"I like my neighbourhood because it’s close to everything that I need to access. There’s a diverse and friendly group of people. I can walk to work, there’s buses and subway, the mall is just down there. I’ve never gotten any hate speech from people in my neighbourhood."

"I don’t eat out a lot, but I like walking to the Diner's Corner for Caribbean, and Randy's, where I can get bake and shark. Then there’s Banjara, which is my favourite place to order from."

"Cooking is not my forte, but I’ve learned to do a few little things over the quarantine. Curry anything - oxtail, chicken, salmon. A lot of green beans, boiled green bananas, and sweet potatoes. I’m diabetic, so I don’t eat too many rice dishes - I make salads, greens, stuff like that… But mostly curry." 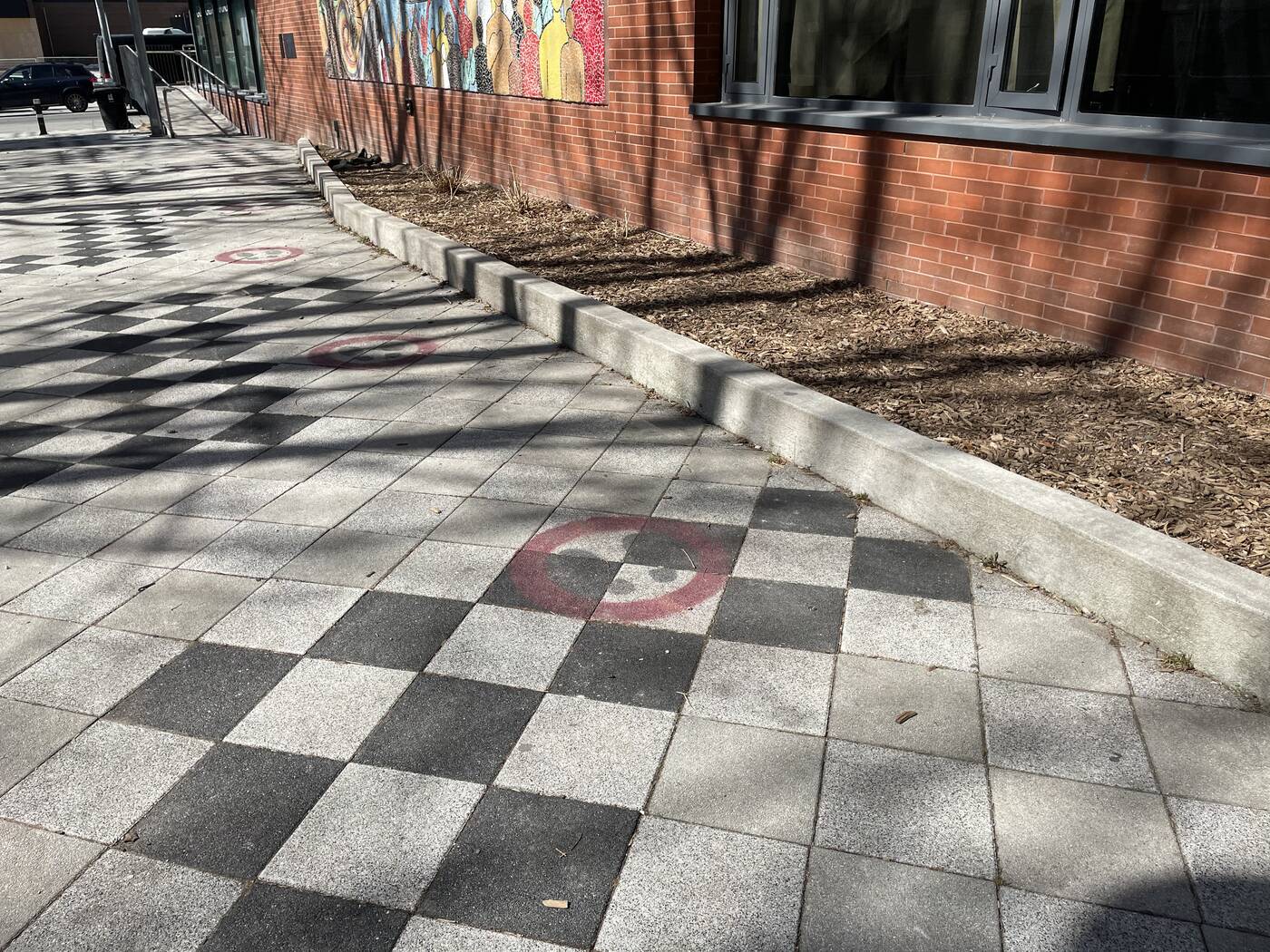 The now-familiar sight of social distancing circles form a queue around the building.

"I’m a proud Torontonian because of the freedom of movement and of culture. I haven’t had the same experiences of discrimination that other people may have elsewhere. There’s so many resources here to access, especially for LGBTQ people."

"I’ve been to Montreal," she says. "And people there, they’re just not as friendly."

This article and headline have been updated.