Some of Toronto's worst intersections for cyclists are getting total makeovers

When talking about Waterfront Toronto's enormous, $1.5 billion Port Lands Flood Protection project, it's easy to become laser-focused on the brand new island that will be created as a result of it.

Villiers Island is shaping up to be exceptionally cool, with plans for a network of next-level parks, natural spaces, residential and commercial developments across 35.5 hectares on an island just east of the downtown core, but it's only one part of what Mayor John Tory has called "one of the largest waterfront revitalization projects in the world."

Some 300 acres of land along Toronto's eatern waterfront will be impacted by the project, much of it benefitting simply from a new mouth for the Don River that will help prevent flooding.

"In addition to creating a naturalized river valley—which, in itself, is a historic and significant undertaking—a crucial part of this project involves building new public spaces, roads and bridges and utilities," reads Waterfront Toronto's website.

A good chunk of these new roads and bridges will be constructed on the mainland, in and around the existing Port Lands area.

Now three years into the seven-year undertaking, Waterfront Toronto has been releasing more and more details lately pertaining to what we can eventually expect — including a major upgrade to everything along Lake Shore Boulevard between Jarvis Street and Carlaw Avenue.

I must say, however, strip of Lake Shore blvd E, between Lower Don Trail & Ashbridges Bay, even on bike trail, is awful. Absolutely AWFUL! So many construction vehicles. So much filth in the air. Very disappointing. #biketo #parkto #waterfront #toronto 👎🏻https://t.co/SDRR5etNhe

The designs, put forward by urban design and landscape architects West8 and the engineering consultancy Entuitive, include plans for a significant reconstruction along parts of Lake Shore Boulevard East and the Lake Shore Bridge in concert with the City of Toronto's Gardiner Expressway reconfiguration.

"This includes rebuilding the roadway, new sidewalks, bike facilities and landscaping. We are now presenting these designs."

You can review them and submit questions in advance, and we'll also present them during the meeting. https://t.co/HLBo408ZZx pic.twitter.com/7CgrEUs7Nd

According to a 49-page-long-document called the "Lake Shore Boulevard East Public Realm Vision," uploaded ahead of last week's meeting, the project will eventually see the bridge area and beyond reconstructed in a much safer way for cyclists, pedestrians and drivers alike.

As it stands now, cyclists and pedestrians heading east along the Martin Goodman Trail from the Harbourfront must forge their own makeshift paths to transfer onto the idyllic Lower Don Trail.

It's a risky route that involves going over worn-down patches of grass, crossing Cherry Street twice along the remnants of some old, decomissioned rail tracks and coming to rest on a median between Cherry and Lake Shore East.

Then, when traffic is clear, you can hurry across Lake Shore (again, the divided road must be crossed twice) to another worn-down patch of land, go through a shady underpass beneath the Gardiner and finally enter the trail next to a weird narrow street leading to the Go Transit Don Yard.

Here's what the treacherous intersection looks like from above: 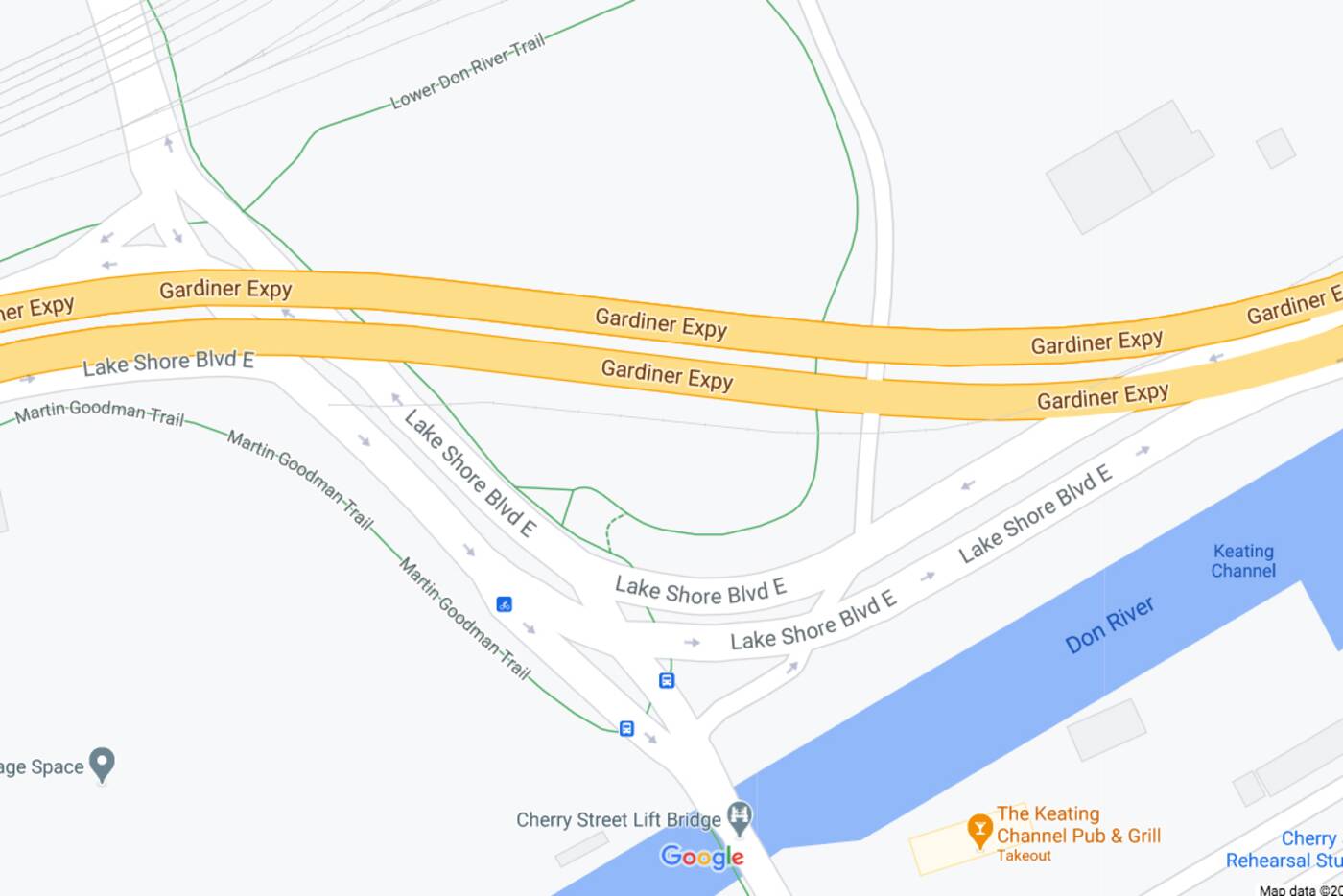 Are there safer ways to enter the Lower Don Trail? Certainly — but this one remains a popular shortcut, as evidenced by all of the people you'll see crossing there on any given day.

And it's just one of several hazardous spots along Lake Shore East in the Port Lands.

Everything from Jarvis St. to Carlaw Avenue is being revamped for "comfort, safety and delight," according to engineers on the project.

Once finished in 2024, we can expect everything from protective barriers for cyclists, rolled curbs and even "pocket parks" along the Lake Shore East cycling and pedestrian routes.

If all goes well, the northern portion of Toronto's Port Lands will eventually boast "an urban civic boulevard with a distinct continuous landscape identity that prioritizes traffic calming measures and enhances the public realm experience.

In other words, you'll be less likely to feel as though you're taking your life in your own hands while cycling along the eastern waterfront.