Some seriously exciting new details were released this week in regards to one of the most exciting infrastructure developments in the history of Toronto's waterfront: The Port Lands Flood Protection project.

Also known as the "Don Mouth Naturalization project," the name for this $1.25 billion undertaking is perhaps a bit bland for what it actually entails... as we're learning more and more each time new renderings drop.

Described by Mayor John Tory as "one of the largest waterfront revitalization projects in the world," the Port Lands project will not only result in a new mouth for the mighty Don River, but in the creation of a brand new island just steps from downtown Toronto.

This is what Toronto's new island will look like https://t.co/8NlX2l7WOB #Toronto pic.twitter.com/kVzIM2ONPE

Villiers Island is still years away from completion (the expected occupancy date for the sprawling new mixed-use community is 2024,) but will eventually host thousands of residents, workers and visitors across its 22 acres every day.

Residential and commercial uses are being built into the nature-inspired paradise, but park land has been one of the primary focus areas design teams and government officials since the project was first announced.

This week, during a public meeting, members of the team unveiled a host of new plans for specific facets of the Port Lands Flood Protection Project — chiefly those pertaining to public realm improvements along Lake Shore Boulevard East and, perhaps most excitingly, the new river valley and parks that are being created.

You can watch the full River and Parks Design Update presentation above (or here) — and if you've got the time, I would suggest that you do. It's truly fascinating stuff.

For those who'd rather read about the future of this land, I'll give you an overarching breakdown of what's currently planned in terms of parks in the former industrial zone just east of downtown Toronto.

As designed by landscape architects Michael van Valkenburgh and Associates, shaped in part by public feedback, the final designs show two "main" parks, both absolutely massive, each with North and South counterparts. 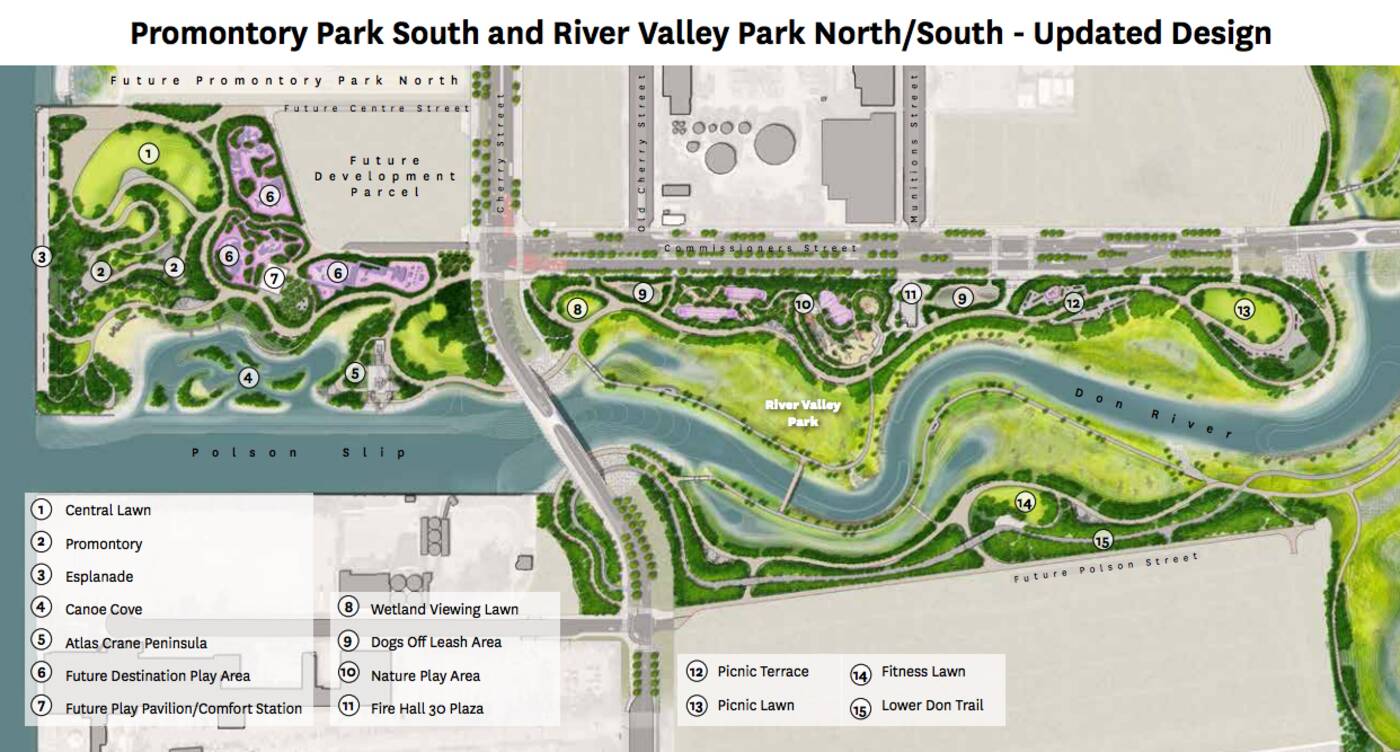 Promontory Park South will be located just west of Cherry Street, directly above the Polson Slip, as highlighted below. 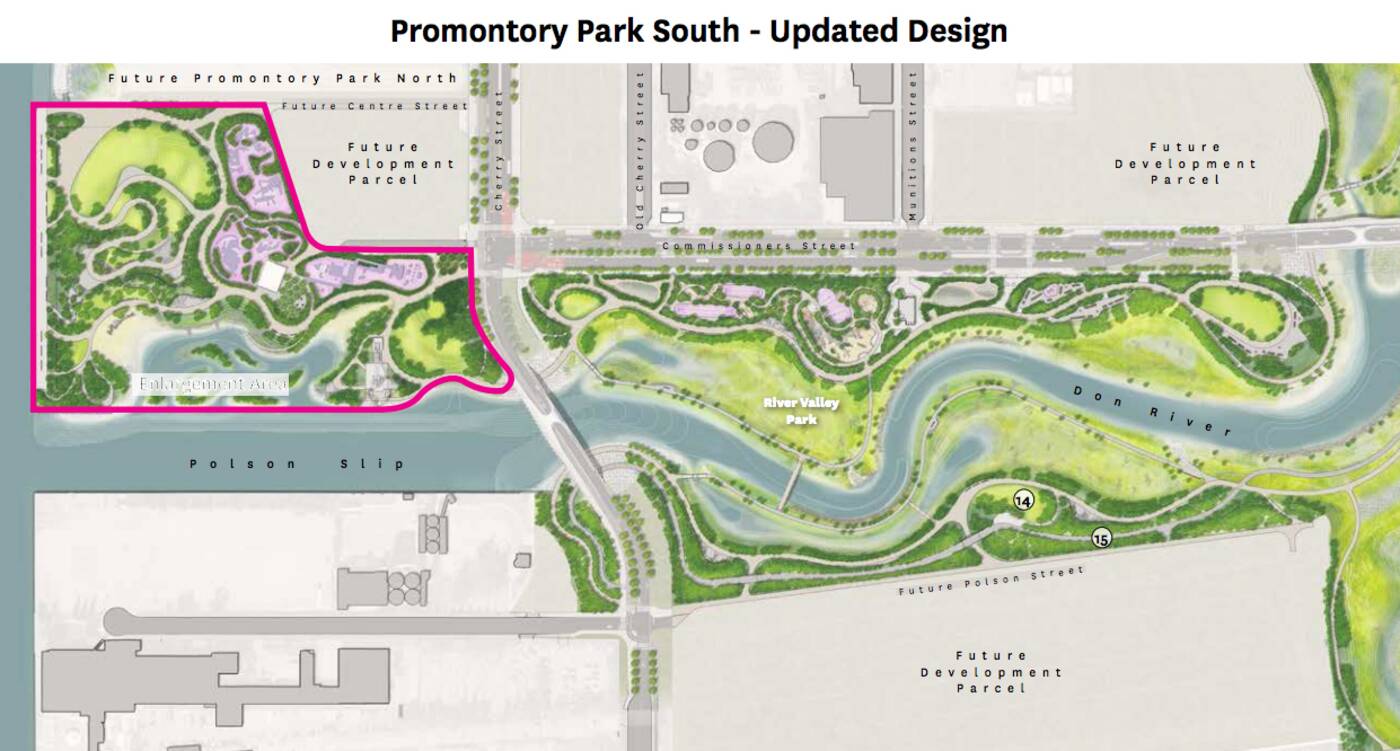 This park will feature (among other things) an event lawn & plaza, a gravel beach, a stone-faced wall, a city-view promontory, a river-view promontory, various light columns, limestone rock features, dedicated gathering spaces and something called a "rocky scramble." 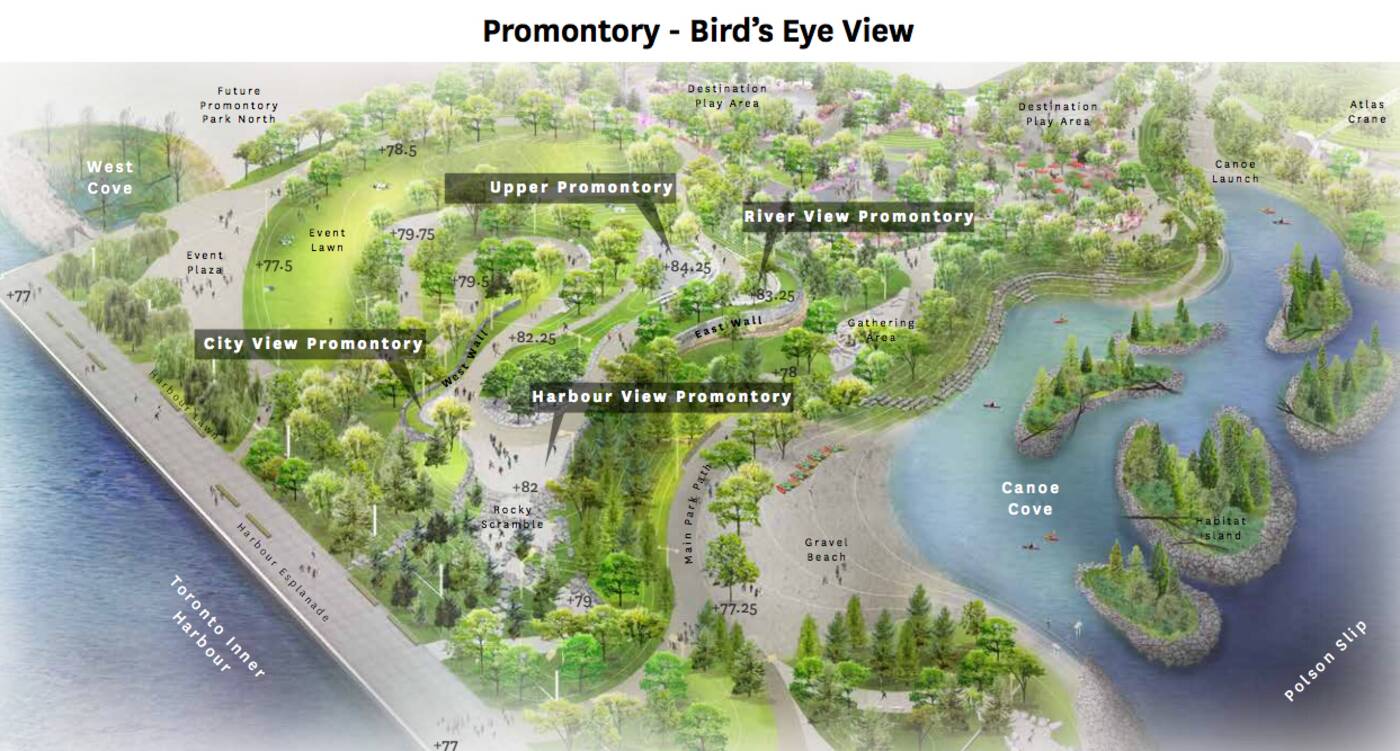 It all sounds lovely, and will no doubt be stunning with van Valkenburgh at the helm, but the plans for River Park North are, in my opinion, way cooler. 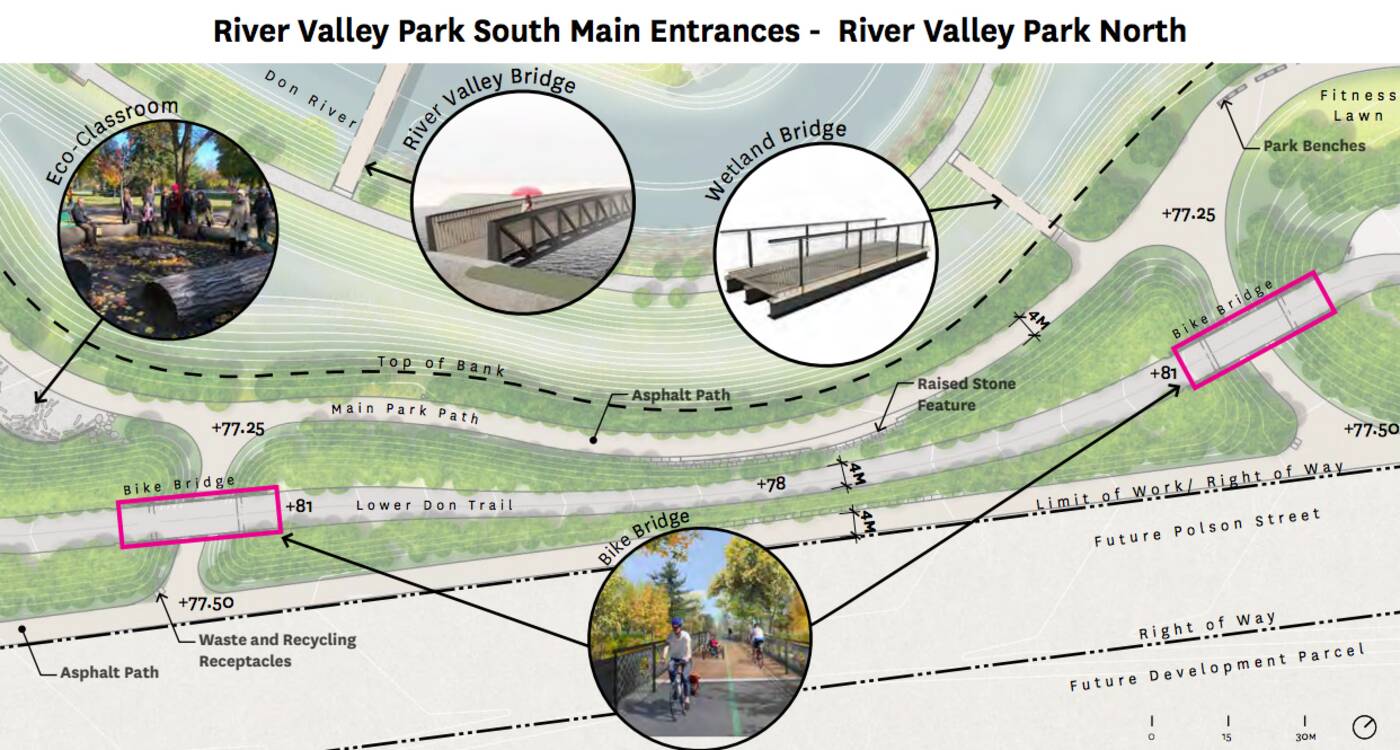 River Park North will be located south of Commissioner's Street, east of Cherry, and just north of the under-construction channel that will eventually serve as a naturalized mouth for the Don (and drastically reduce flood risk in Toronto's southeastern downtown region!) 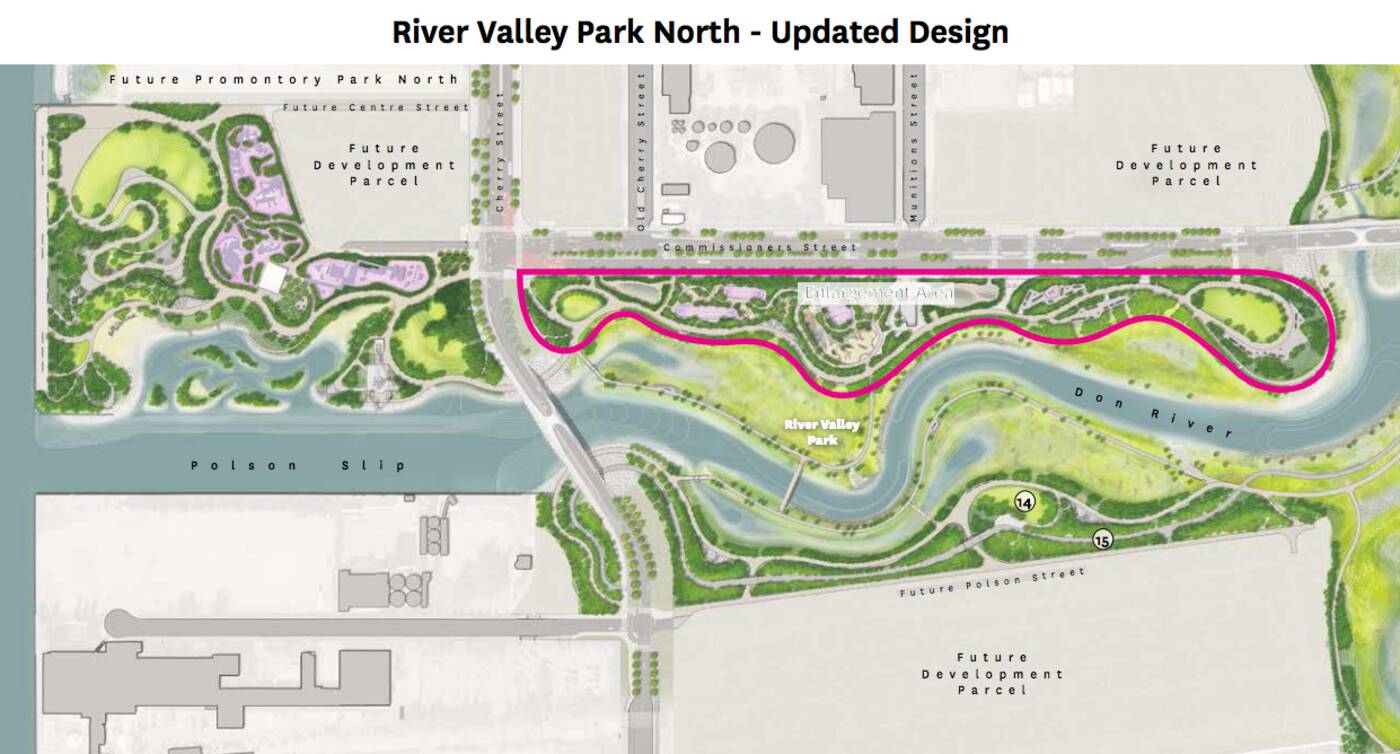 River Valley Park North will boast three distinct "Natural Play Areas," with "adventurous, all-ages design" that is " appreciative of the wildness that has been kept there. 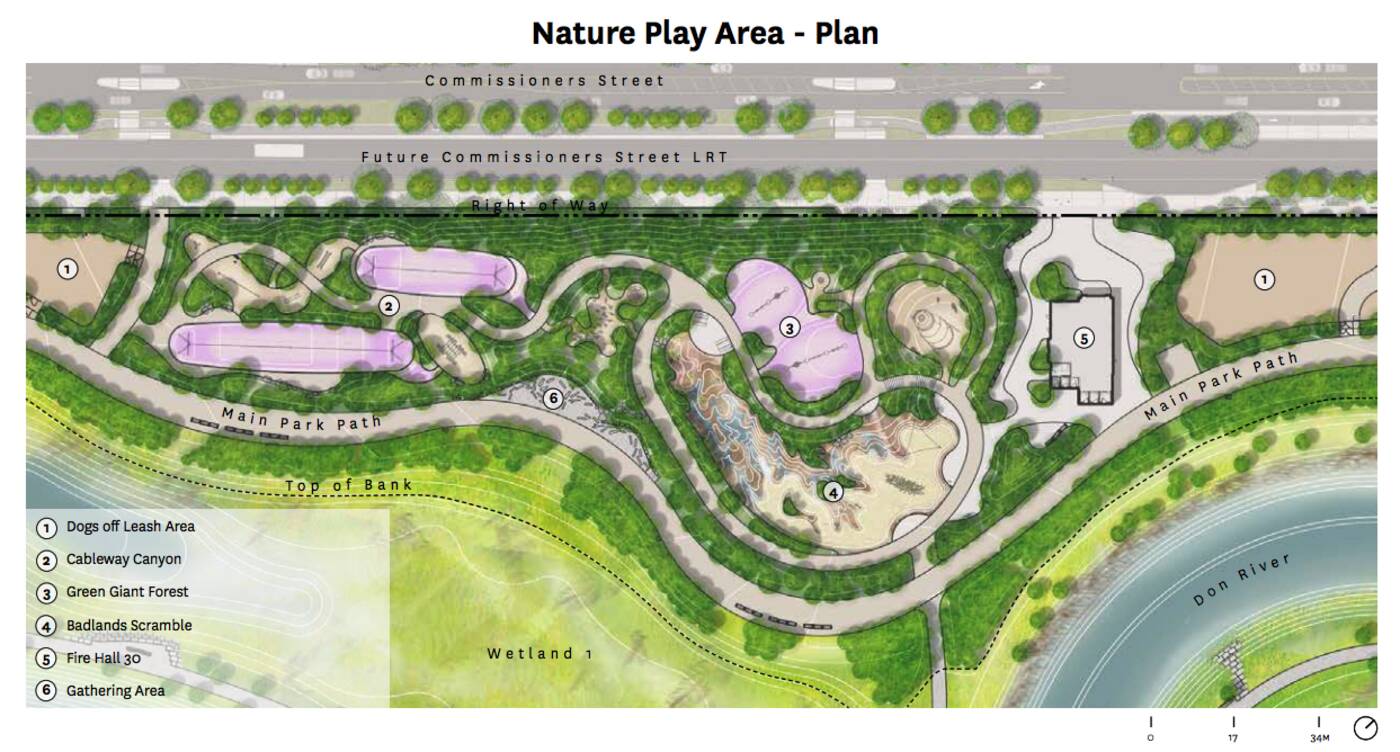 The largest and westernmost play area is called "Cableway Canyon" and boasts some of the most impressive features Toronto will have ever seen in a public park, including parellel ropes, built-in slack lines, a "to-fro" swing, a chain path and not one but two "large gated cableways" (read: small, ground-mounted ziplines.) 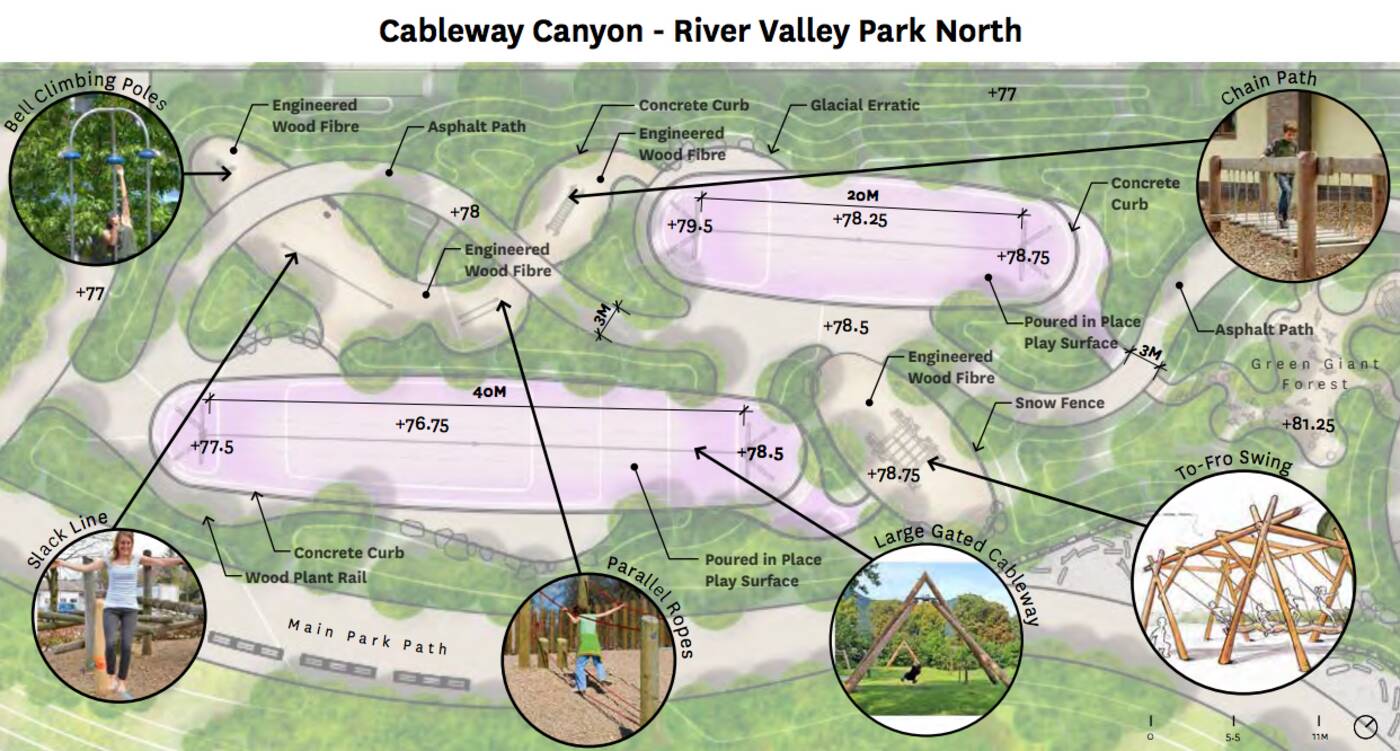 Next, in the north-central portion of the park, there will be a natural play area called "Green Giant Forest" with multiple tree-mounted "forest swings" on poured in play surface, a massive snow owl shelter, "pole climbers" shaped like tree routes, thrones built out of logs and art inspired by "woodland friends." 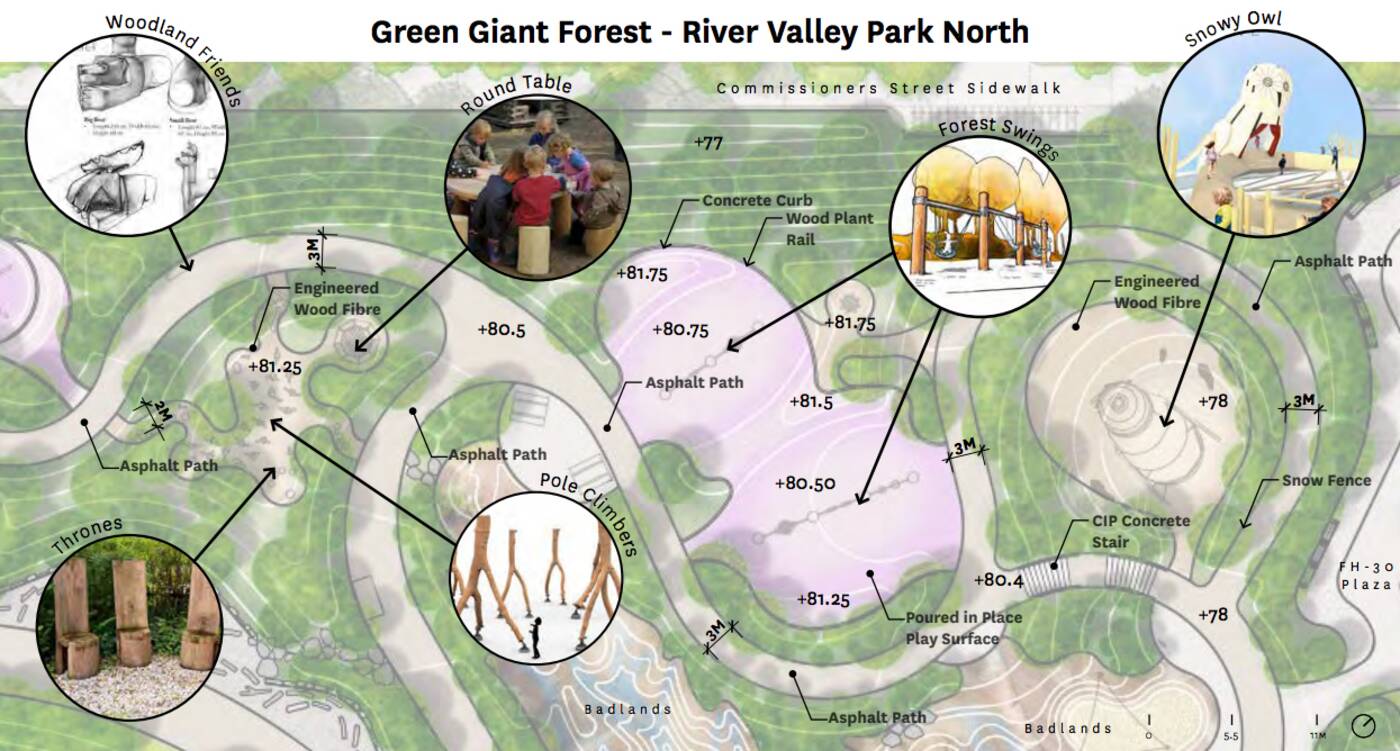 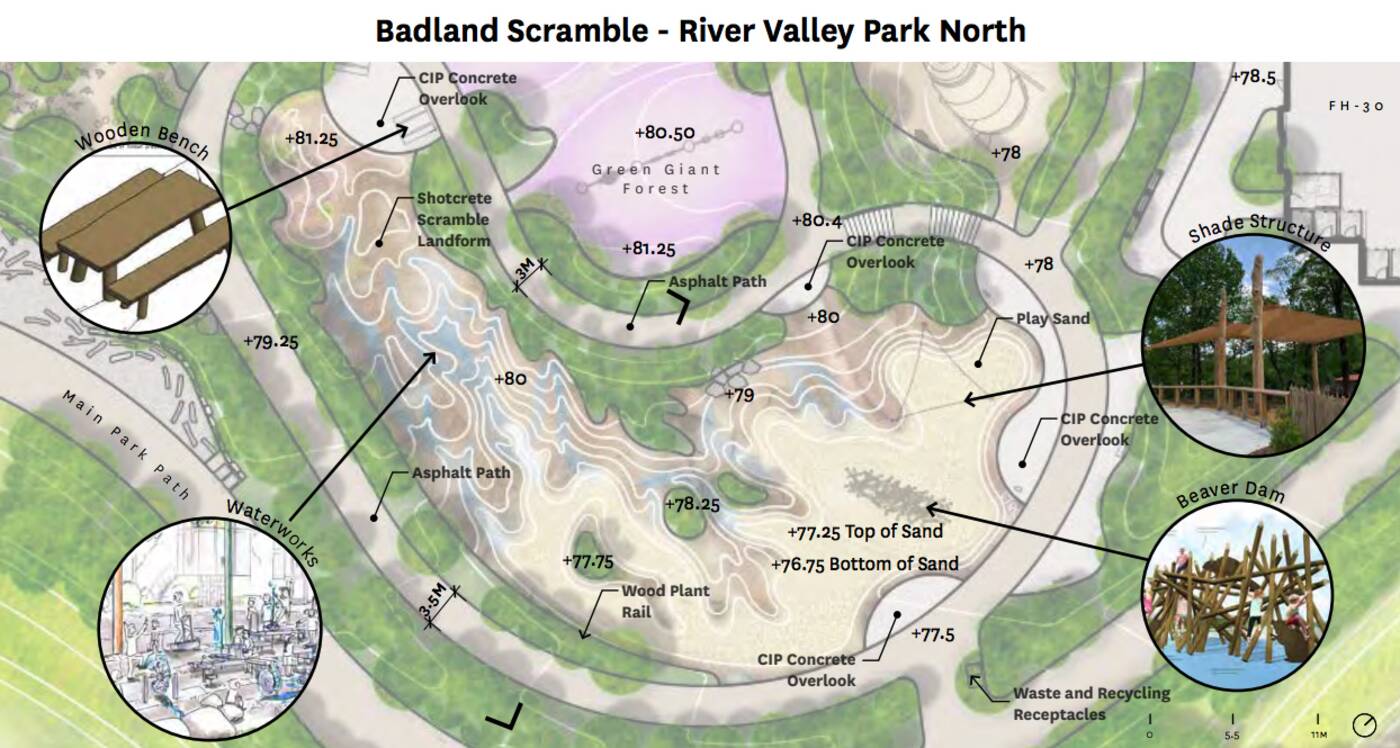 Beyond the play areas, River Valley Park North will boast such features as a fitness lawn, an eco-classroom, a picnic terrace, a wetland view lawn, off-leash dog areas and a whole host of pedestrian, valley, wetland and bike bridges. 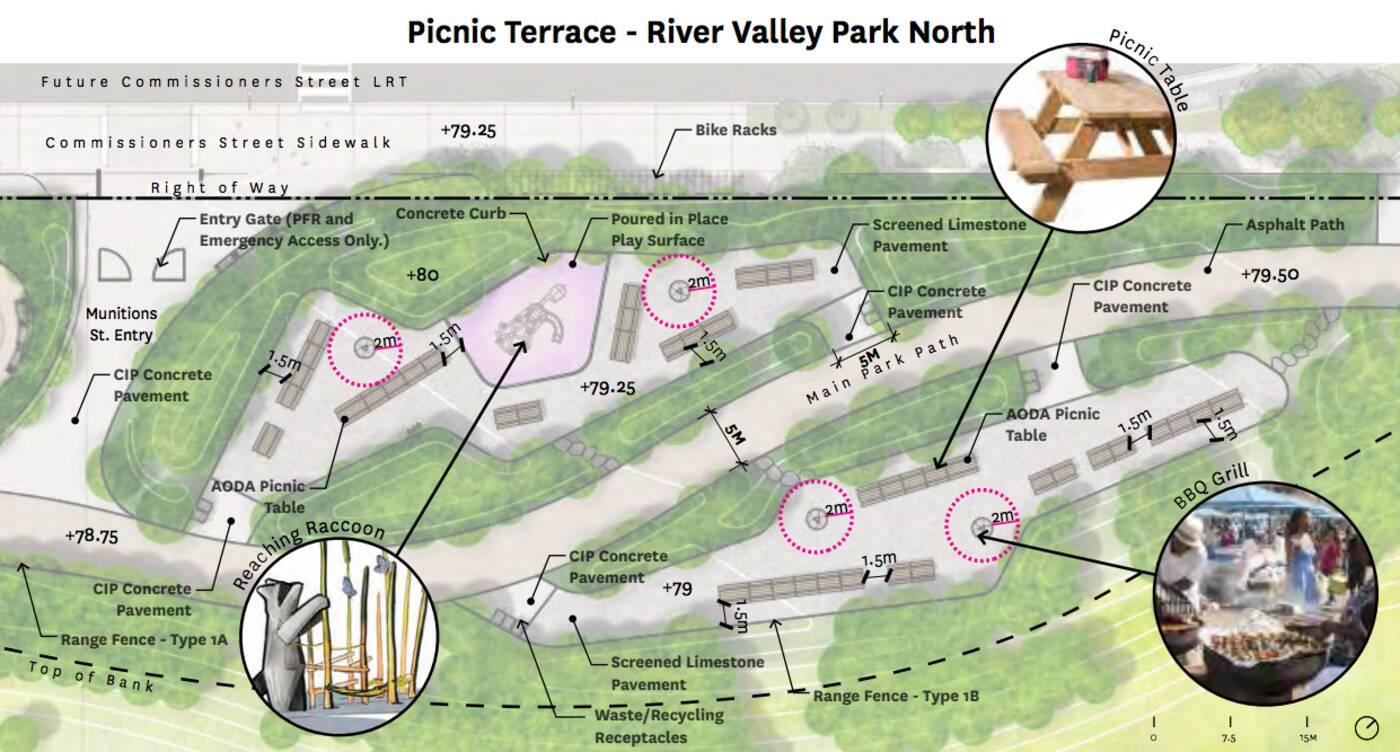 An integrated network of paths and trails will link all of these urban play spaces, the north and south sections of both parks, the rest of Villiers Island, and the renovated Port Lands area in general. 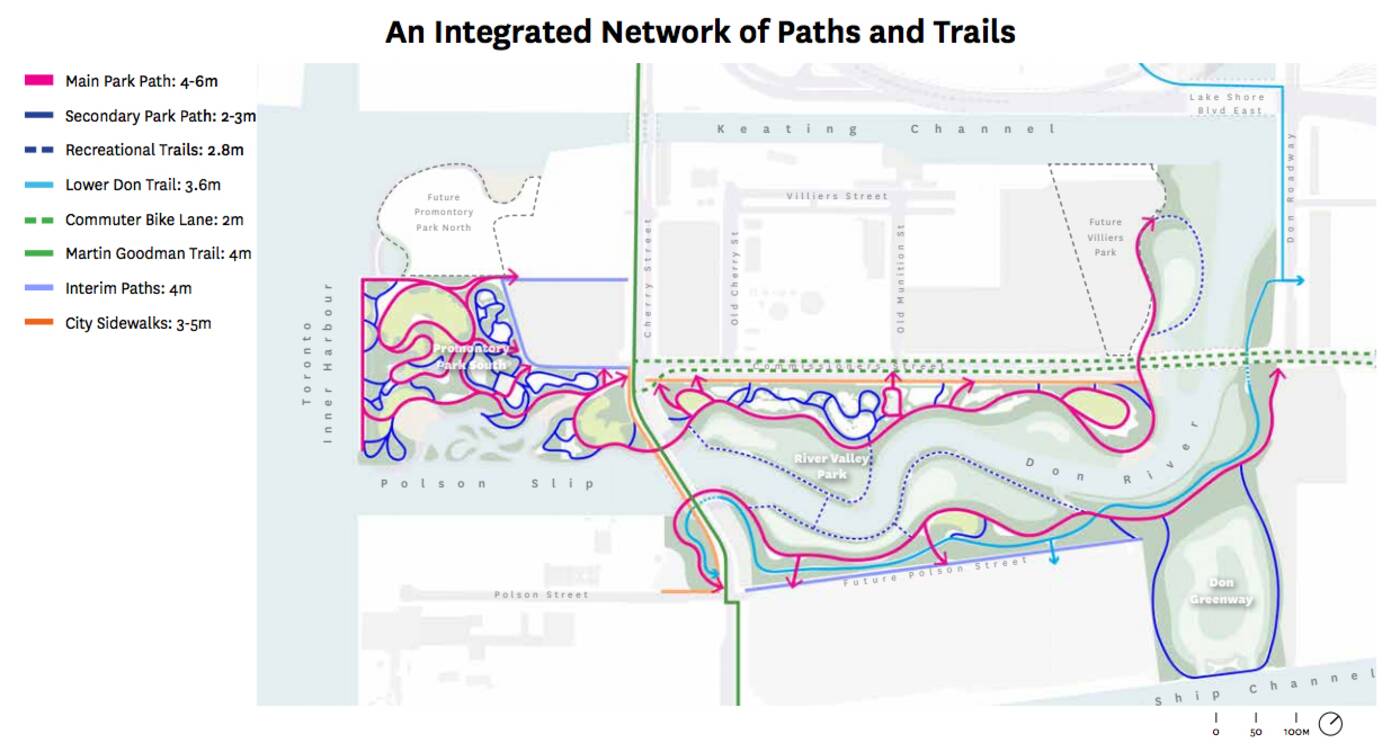 Between Villiers and the mainland, more than 290 hectares of land (more than one third of Toronto's entire waterfront) will be unlocked for revitalization through this project, bringing life to an otherwise beautifully-positioned but long-underutilized part of the city.

The project itself is expected to boost Canada's economy by an estimated $5.1 billion by the time all is said and done in 2024.

More exciting for the people of Toronto: All of these spaces, the businesses near them, the stunning bridges being installed to support access to the island and more will be free for everyone and completely accessible via public transit.