Toronto is getting some seriously cool new bridges by the waterfront

Of the many development projects planned along Toronto's waterfront, none are as exciting as Villiers Island: A brand new mixed-use community, purpose-built with nature in mind to revitalize old industrial lands that are roughly as large as the downtown core.

Created as part of the city's $1.25 billion Port Lands Flood Protection project — an undertaking Mayor John Tory has described as "one of the largest waterfront revitalization projects in the world" — Villiers will be completely surrounded by water.

That channel will eventually serve as a naturalized mouth for the mighty Don River, drastically reducing flood risk in Toronto's southeastern downtown region and effectively making a new urban island for all to enjoy. 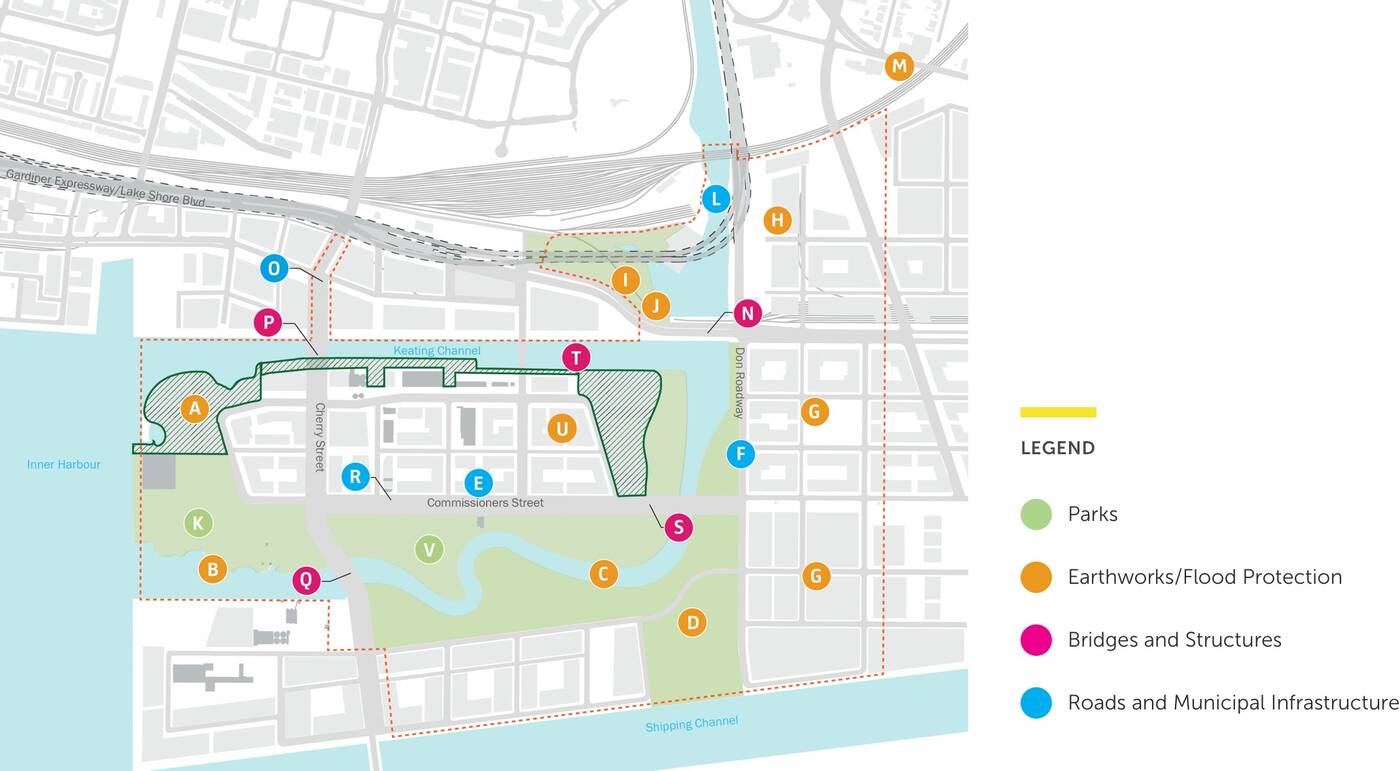 The new Don Valley River mouth will separate a portion of Toronto's Port Lands into its own small island. Image via Waterfront Toronto.

Villiers Island is expected to be complete by 2024, which may sound like a lot of time, but really isn't in terms of construction.

Thousands of people are expected to live on Villiers once complete. Thousands more will visit every day to work or enjoy the spectacular network of parks planned for the novel island. They all need a way to get there.

"Creating a new island in the Port Lands means we need new bridges to connect downtown Toronto to Villiers Island," reads a recent update from Waterfront Toronto on the project's progress.

"We asked our design and engineering team, led by Entuitive with Grimshaw and Schlaich Bergermann, to create iconic bridges to move transit, cyclists, pedestrians and vehicles across the new Don River. After much feedback and cross-discipline collaboration, the result is a family of bridges we hope will become new Toronto landmarks."

New renderings of all four bridges suggest that they very well could be. 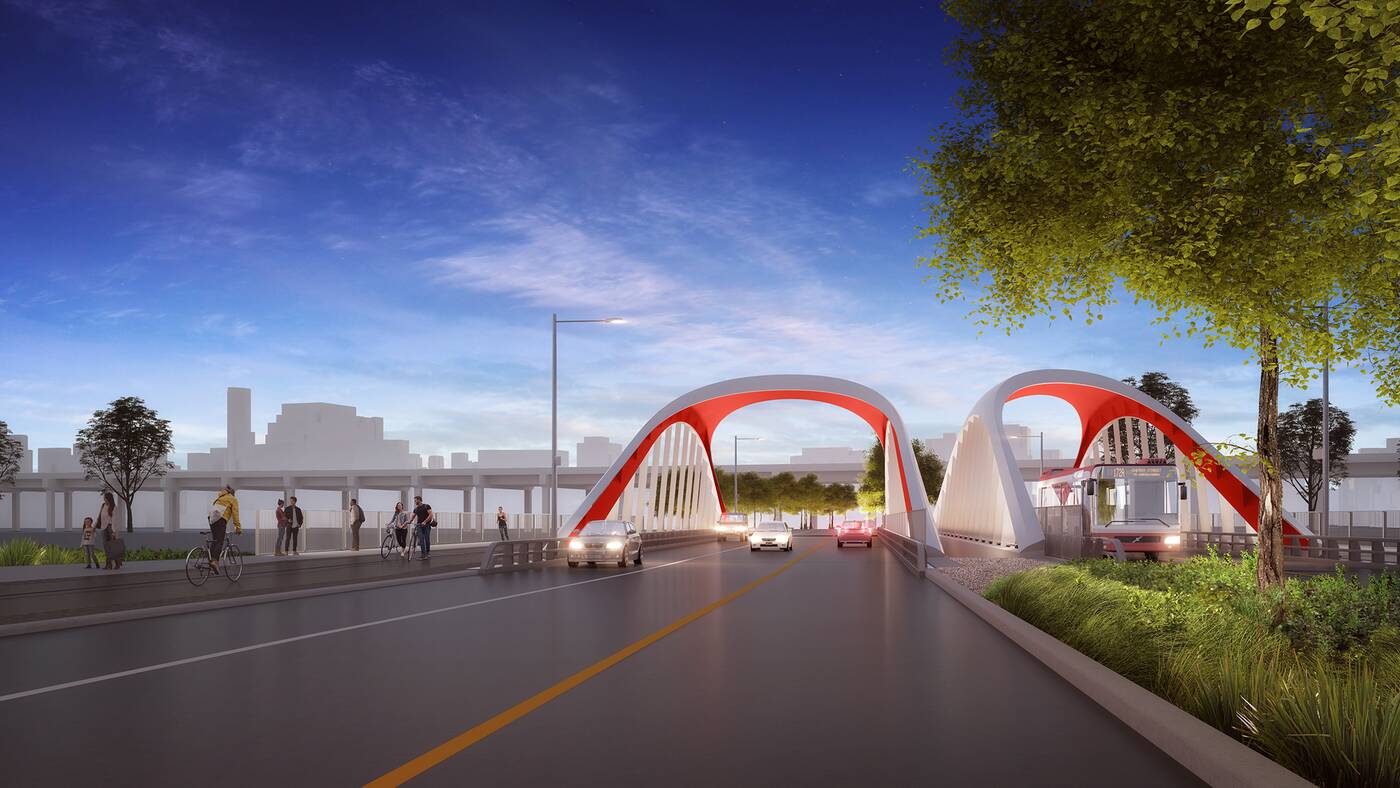 The Cherry Street North Bridge is definitely the most ambitious of the lot, as it will actually be two separate bridges running side-by-side: One for pedestrians, bikes and cars, the other for public transit vehicles exclusively.

It also appears to have changed the most since the bridges were first pitched. Here's the initial rendering (you can see a full progression of the designs here.) 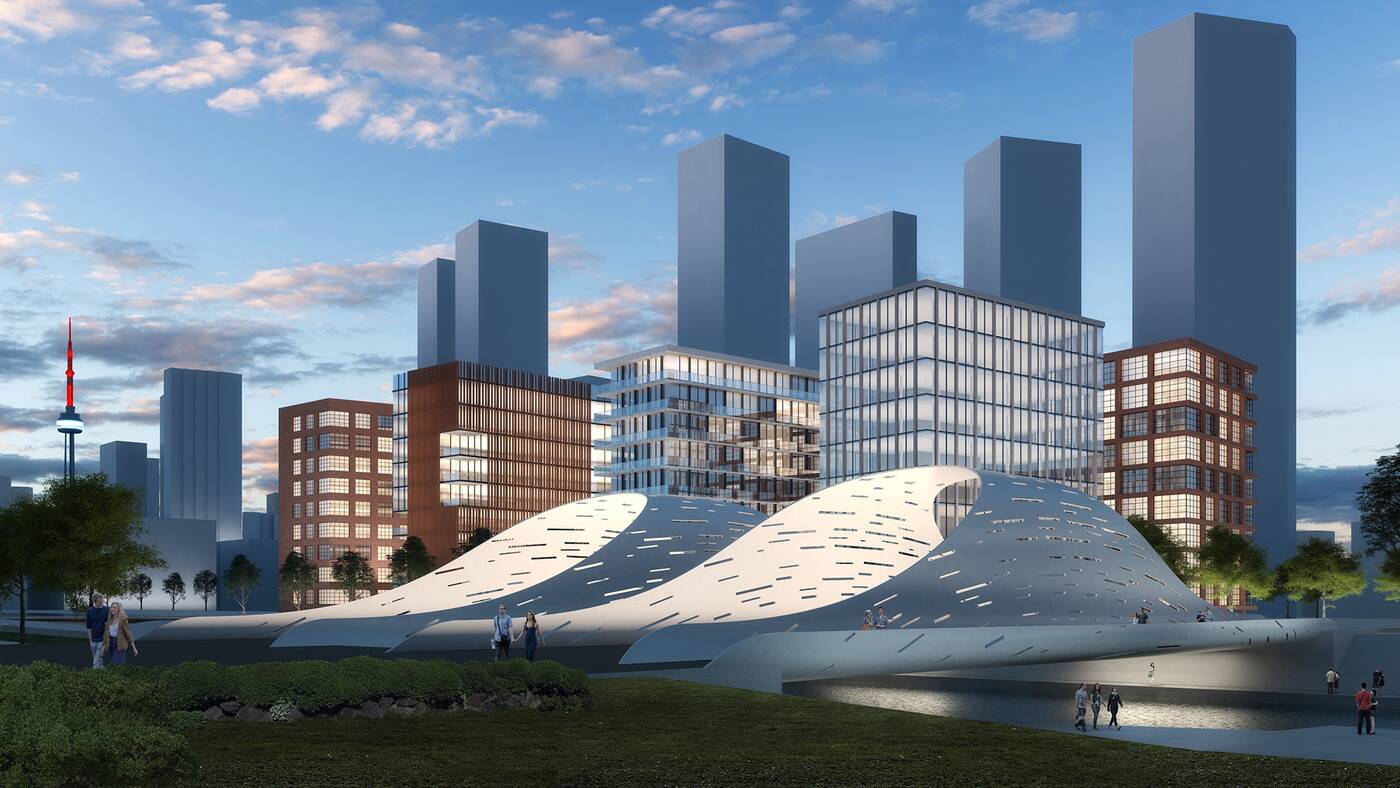 A smaller bridge farther south on Cherry Street will run over the new river. They're calling it the "Cherry Street South Bridge" at present. 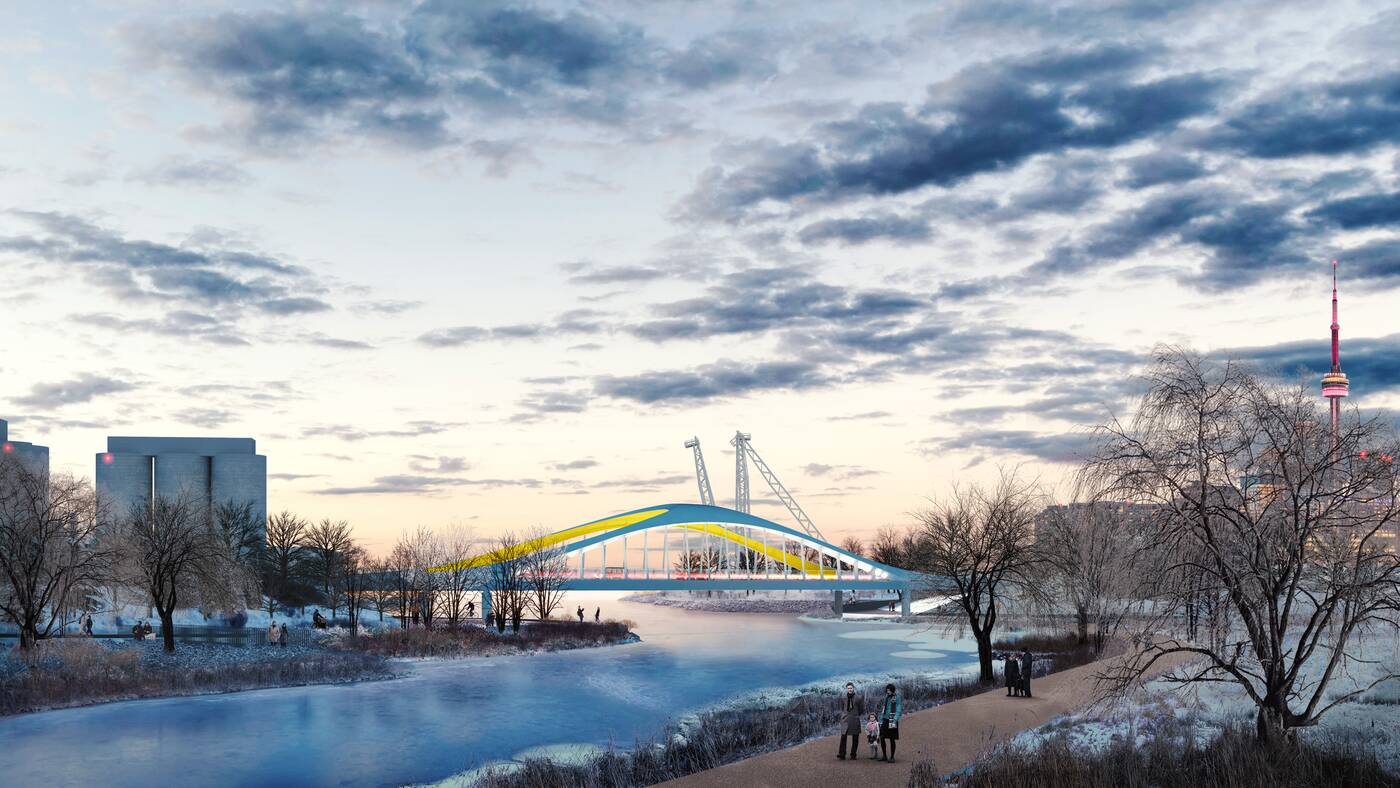 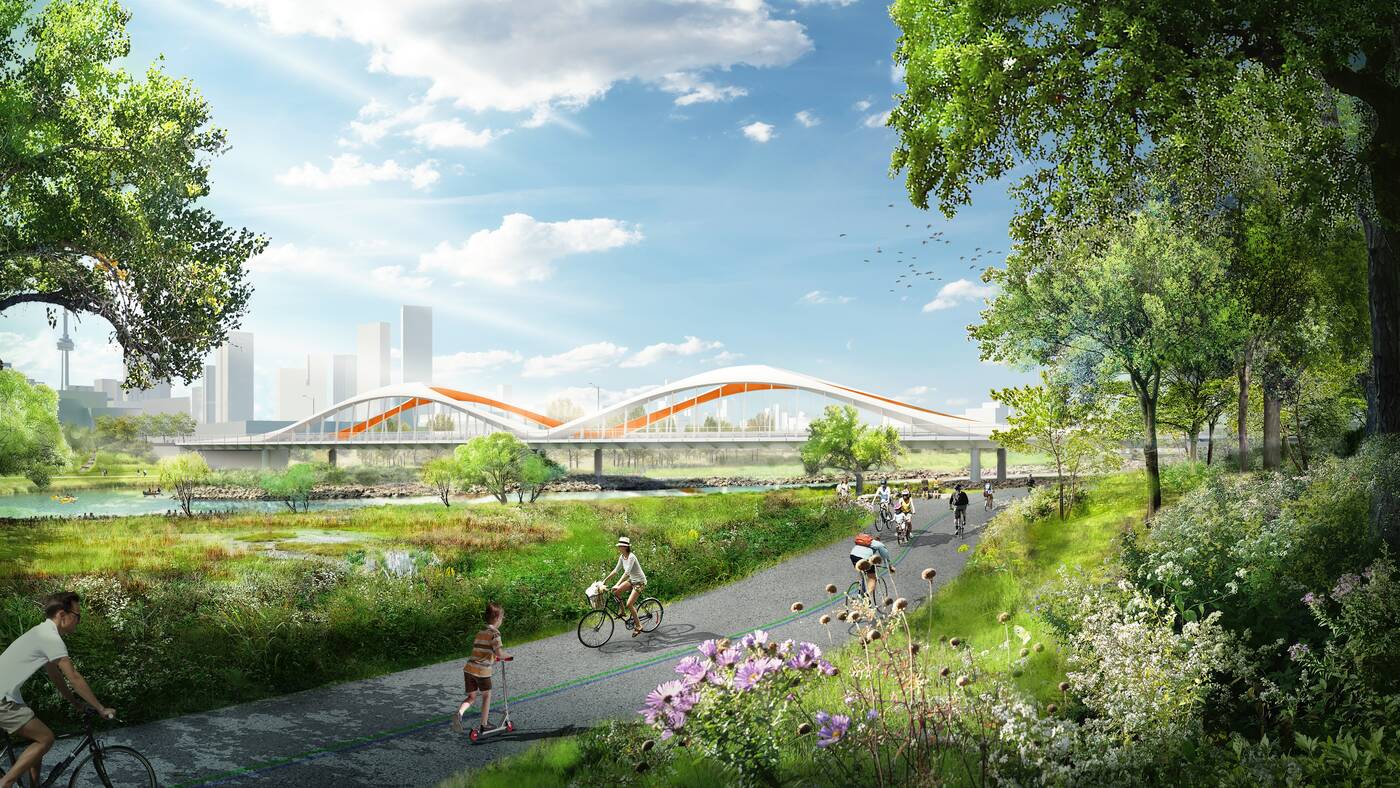 Both the Cherry South and Commissioners bridges will eventually have secondary bridges running next to them, just like the Cherry North bridge, according to Waterfront Toronto.

A report published by the consortium of municipal, provincial and federal government officials states that making space for a dedicated streetcar corridor proved challenging.

"The solution is to design two bridges for all three locations: one for cyclists, pedestrians and vehicles and another for transit," reads the bridge update.

"As part of this project, we'll build the transit bridge at Cherry Street North and design the others, to be built when demand for transit to the south and east of Villiers Island increases." 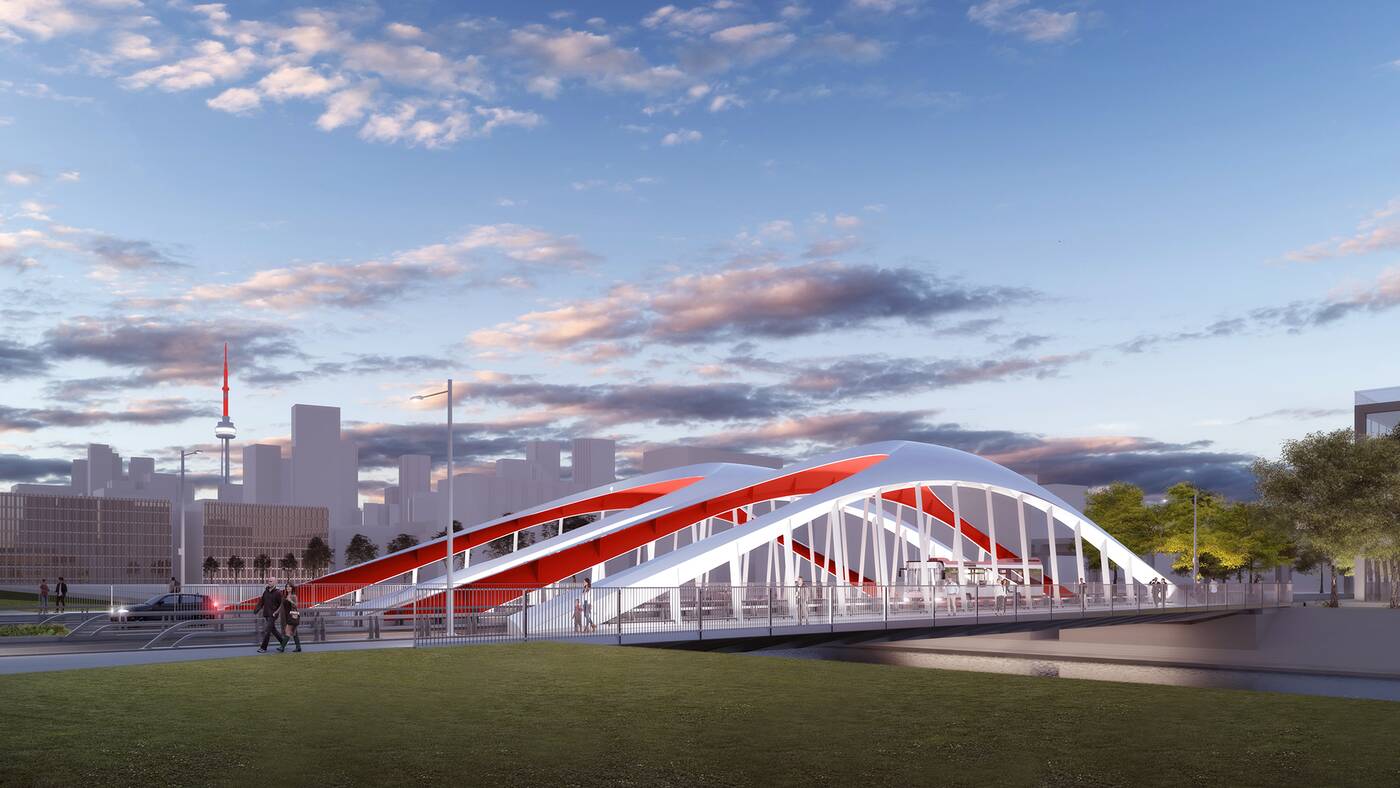 Designing the bridges is one thing — and a very difficult thing at that — but constructing them is another, and it will involve many different parts and experts in many different places.

"The bridges are being fabricated in two stages. The metal is being bent overseas at CIG in the Netherlands. These ship builders have the expertise needed to bend steel into the unique shapes needed for the bridge shell," reads the Waterfront Toronto post.

"Once complete, the pieces are sent to Cherubini's facility in Nova Scotia. There, the bridges are being assembled like puzzle pieces and welded together."

The bridges will be shipped to three sites in the Port Lands via the St. Lawrence Seaway. The first to go in will be the LRT bridge at Cherry Street North, "barged from Halifax in one piece and placed over the Keating Channel with a crane."

That should be fun to see!