Among the multiple new transit lines Toronto is getting over the coming years are a few major ones for residents of Scarborough, one of which just came a little closer to fruition.

The region is set to benefit from a new Scarborough Subway Extension, which will link up with the future eastward extension of the nearly-finished Crosstown Eglinton LRT, as well as, eventually, a proposed Sheppard East Subway extension.

It is the Eglinton East LRT extension that John Tory has been pushing for the most lately, and the latest plans for it were, as a result, just approved by City Council this week, meaning that teams can proceed to sorting out project costs, work schedules and other details before getting started on actually building it.

"I am absolutely determined to get the Eglinton East LRT underway because I know that it will make a meaningful difference to transit users in Scarborough," John Tory said at a press briefing on Thursday.

"Scarborough has experienced under-investment in transit for decades... both a transit which connects the rest of the city and Scarborough together, and also transit that allows people to move around inside of Scarborough."

Unfortunately with a recently updated design for the new line come new costs, driving the construction price to a staggering $4 to $4.4 billion — nearly two times what it was initially planned to be, in part due to a few changes to Scarborough Subway Extension along Eglinton and at the shared Kennedy Station.

While the Eglinton East LRT will run 21 stops over 15 km between Kennedy Station and Malvern, the subway line will cut through at McCowan, running northeast from the shared terminus at Kennedy Station to stations at Lawrence and McCowan, Scarborough Centre, and Sheppard and McCowan, where the Sheppard line extension will also end.

This will form full, circuitous routes that enable commuters to get to and from the downtown core, midtown, and North York far easier, while also providing multiple GO Transit connections to other regions and enabling far easier traversing of Scarborough itself, as Tory emphasized before he brought the latest plans to council. 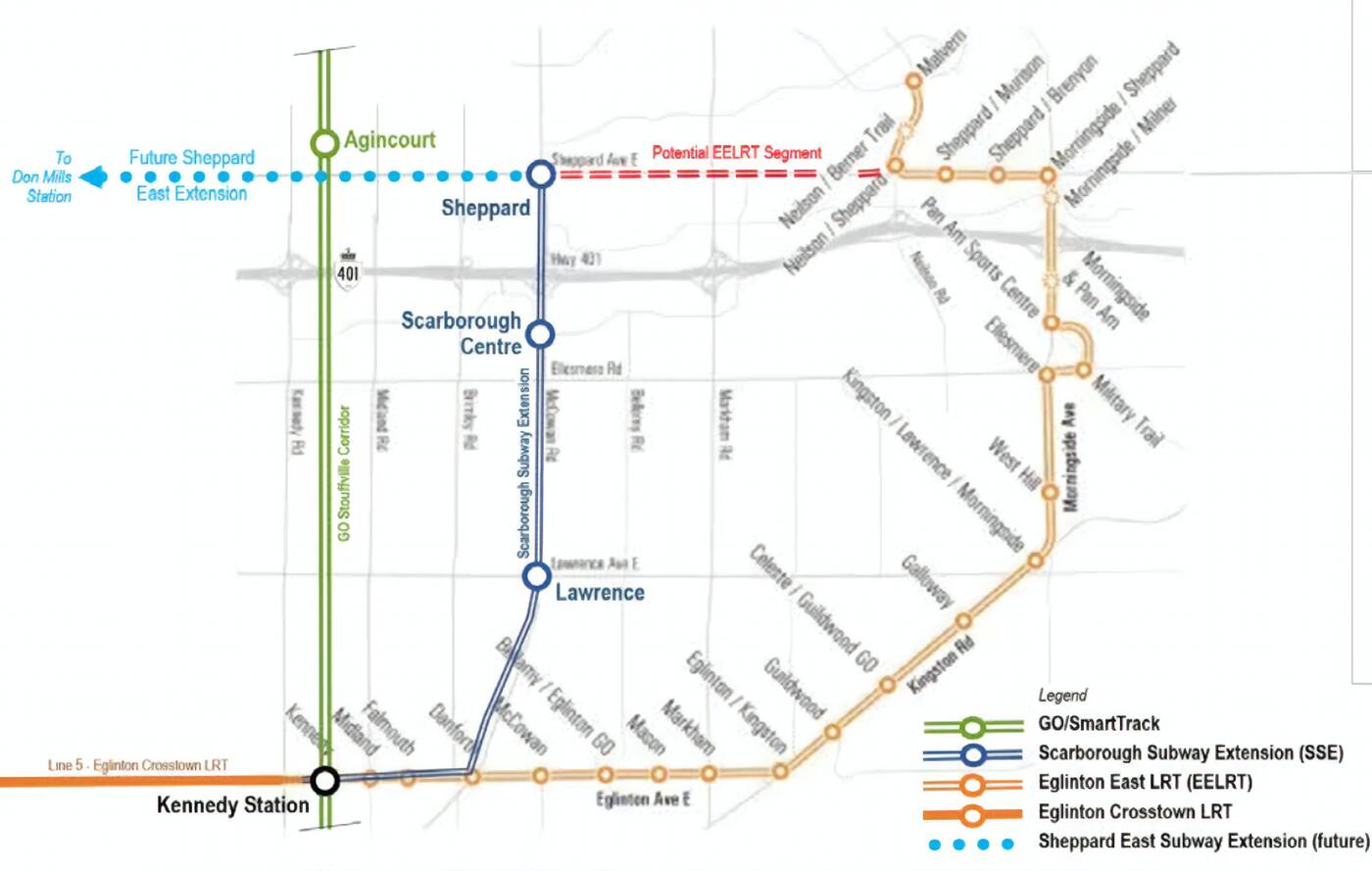 What Scarborough's transit network will eventually look like. Map from the City of Toronto.

Though all of Toronto's ongoing transit projects are still many years away from  being up and running, it's clear that the plans — including for the largest and priciest one, the Ontario Line subway — are extremely ambitious and thus extremely costly, and have also been quite messy and all over the place.

With both the city and the province at severe deficits largely because of the pandemic and this hell of a year, the prioritization of funds at this point a contentious subject as ever.