This plan would have changed the Toronto Islands forever

There have been persistent schemes to connect the Toronto Islands with the mainland over the years, each of which sparked intense debate.

As early as 1894, plans were tabled to bring streetcar service to the Islands, and the federal government even promised to put aside a lump of cash for a pair of bridges in 1909 as part of widespread changes to the harbour.

Remarkably, a plan to build a tunnel across the western gap in 1935 even broke ground with $1 million worth of federal funding before it was ultimately killed by freshly elected Prime Minister William Lyon Mackenzie King.

These projects would never really go away, though. An ambitious if ultimately misplaced plan from the city's influential Board of Control in 1950 called for a looping extension of Lake Shore Boulevard through a tunnel across the western gap and a bridge back to the mainland spanning the eastern channel.

As Mark Osbaldeston notes in Unbuilt Toronto, the idea of a "ring" around the Island actually dates back to plans prepared for the Harbour Commission in 1921. The 1950s plans were just a reboot of an idea that had been bouncing around for decades. 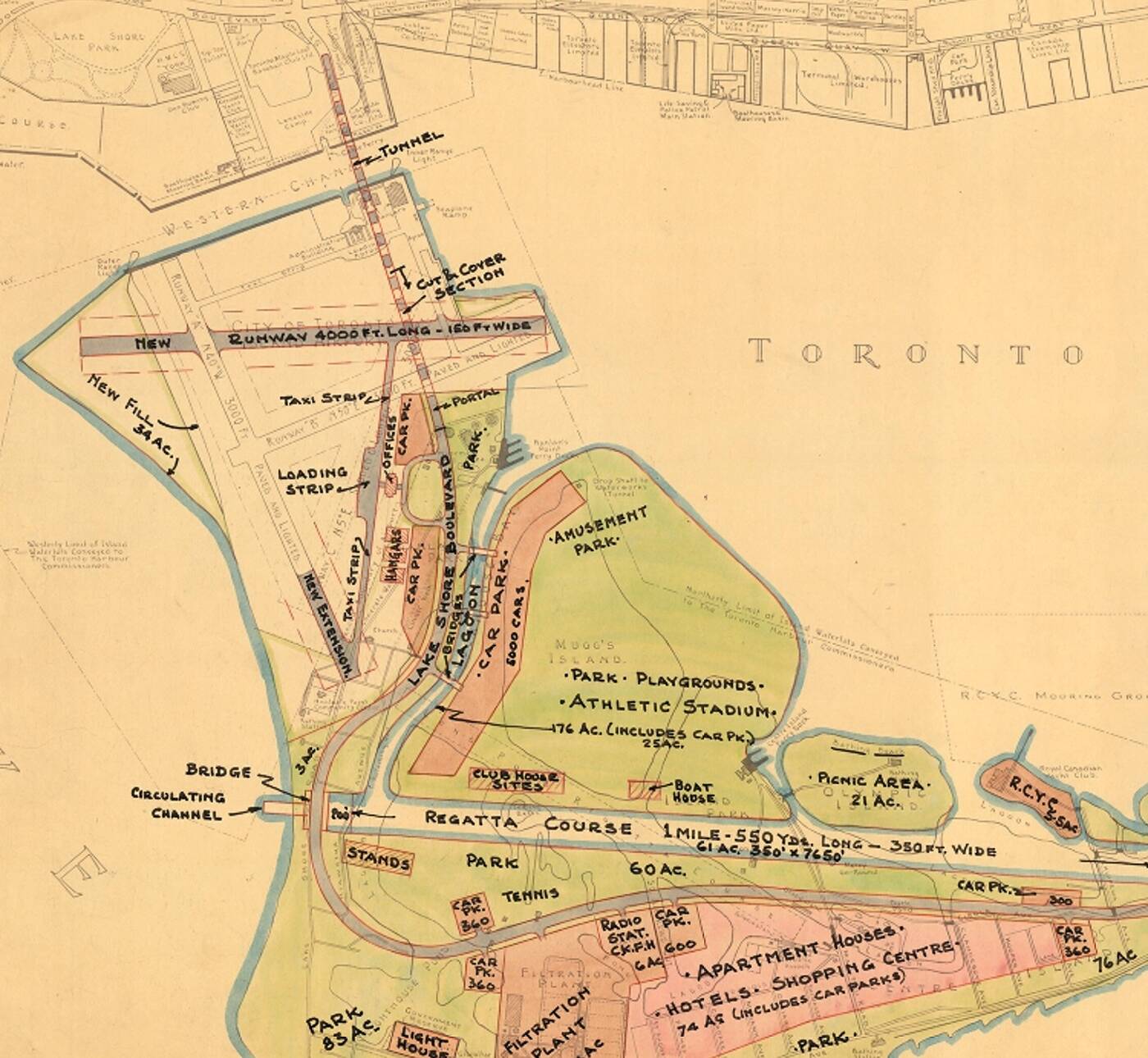 Cropped view of the 1950 plan to redevelop the Toronto Islands. Image via the Toronto Archives.

Debates about the merits of building a fixed link to the Islands were as similar in the 1920s as they were in the 1950s and ultimately hinged on the same issues all the way up to the early 2000s, when a key facet of David Miller's mayoral campaign was his opposition to an Island bridge.

At the turn of the century, the Harbour Commission believed such a connection was key to building an airport. Even if this didn't end up being the case, calls for better access to the Island airport persisted from its founding in 1939 to the opening of the pedestrian tunnel in 2015.

Throughout this more than 75 year period, voices of opposition pointed out that the construction of any bridge or tunnel might risk spoiling the natural setting of the Islands by encouraging the arrival of mass automobile traffic.

What's so remarkable about the plan of the early 1950s is that the Board of Control wasn't exactly shy about its desire to completely redevelop the Islands.

In fact, this plan unabashedly called for the reduction of parkland in order to make the area a tourist hub with entertainment, accommodation and even retail.

While through traffic on the Islands was to be discouraged thanks to enormous parking lots near Hanlan's Point (one with room for 5,000 cars), the presence of new hotels, housing, and a shopping mall were guaranteed to dramatically shift the way the Island was used. 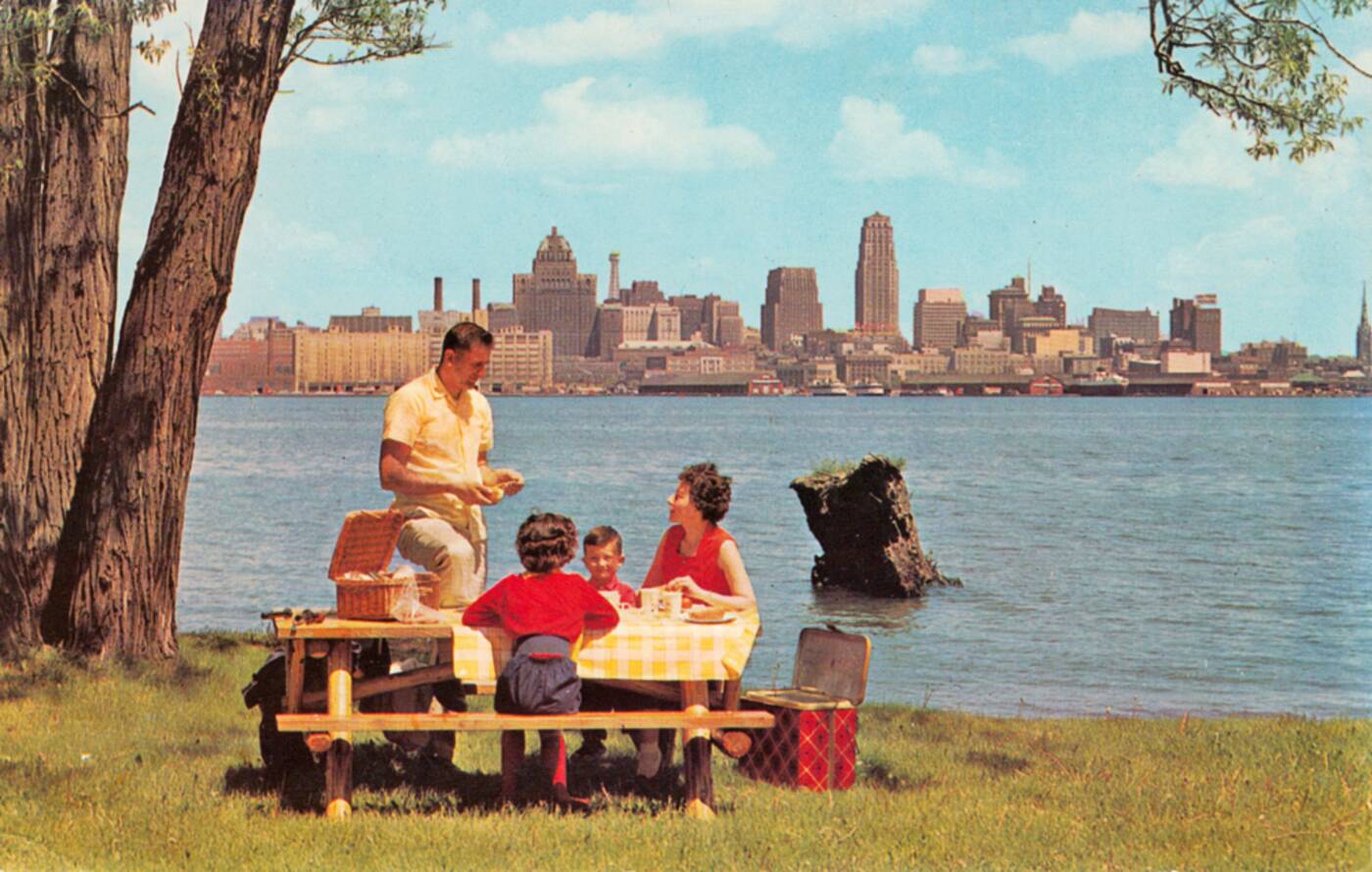 This lovely scene would have been endangered by the 1950s plan to build a tunnel to the Islands.

In the end, the plans didn't receive widespread support and they were scrapped. The Harbour Commission again pitched a tunnel in 1965, but that too was shot down.

One of the primary reasons the existing pedestrian tunnel to the Island Airport was built is that it came without the risk of increased vehicular traffic to the Islands.

Is the idea for a vehicular link to the Islands finally dead? Given how many proposals there have been over the last century, that's doubtful. It is, however, difficult to imagine a shopping centre in the middle of what is one of Toronto's nicest urban escapes.