Behind the scenes at the TTC 50 years ago

In 1965, the Toronto Transit Commission was putting the finishing touches on its first (and to date only) major east-west subway. Running just under 13 kilometres from Woodbine to Keele, the $206 million first phase of the Bloor-Danforth line consisted of 20 stations, two bridges, two yards, and was mostly built without the use of tunnel boring machines.

Matching the existing look of the Yonge line, the platforms were modern and spare in style. Basic tiled walls, no public artwork.

On a 31-acre site south of Danforth Ave., west side of Greenwood, the TTC built what was then the largest transit yard in the city. Apart from storage space for 244 individual subway cars, the complex included shops for painting, cleaning, and maintaining rolling stock, as well as equipment for manufacturing replacement parts.

Before the Greenwood yard, Yonge line subway trains had to be lifted off the tracks and carried over ground to the TTC facility at Bathurst and Davenport for any repairs that couldn't be completed in the basic facilities at Davisville.

The Greenwood site was originally a clay quarry and later a garbage dump. According to Transit Toronto, the TTC had to remove a layer of waste about 23 metres thick before construction of the yard could begin. (At one point the city considered building a sports stadium over the yard, but later balked at the potentially exorbitant cost. Loblaws likewise expressed an interest in covering the site with a supermarket.)

In total, the Greenwood and its much smaller sister at Dundas West station contain about 16 kilometres of track--roughly two-thirds the total length of the east-west subway line today.

The yard opened with the rest of the subway in February 1966 and is still in operation today, though it's since been dwarfed in size by the Wilson complex that serves Line 1.

Here's a look back at Greenwood yard when it was brand new. 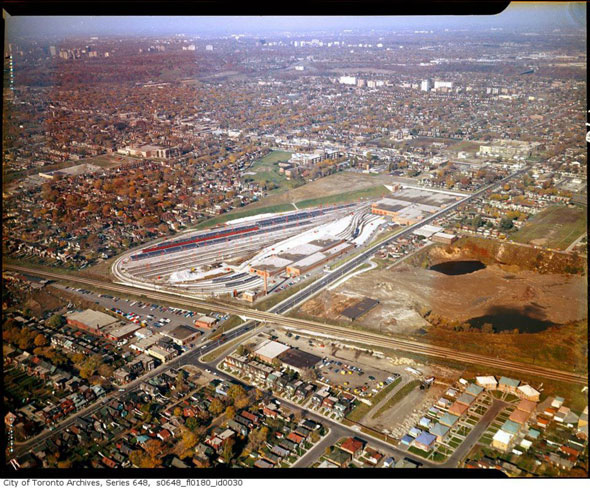 A colour photo of the newly finished Greenwood yard. Note the bright red, English-built Gloucester trains on the storage tracks. The famous cars were used from 1954 until 1990. 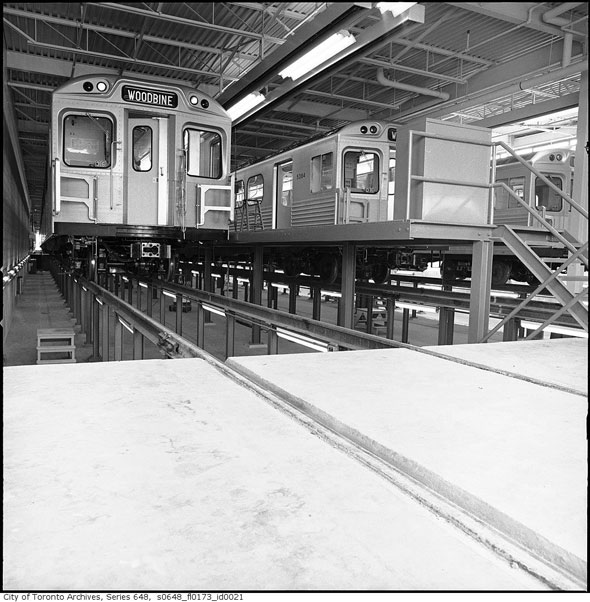 Two H1 series trains over a maintenance pit. These trains were bought specifically for the Bloor-Danforth line in the early 1960s and were used during the opening ceremonies. The last one was retired in 1999. 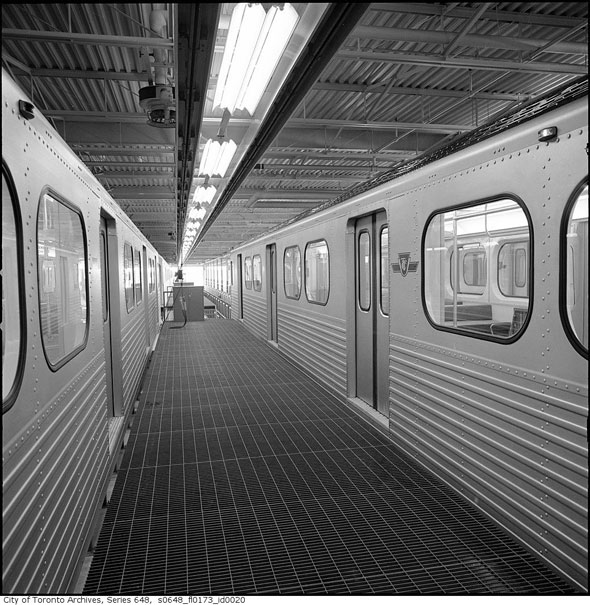 When trains are in the yard the only way to get inside is via one of these gangways, which act as mobile platforms. 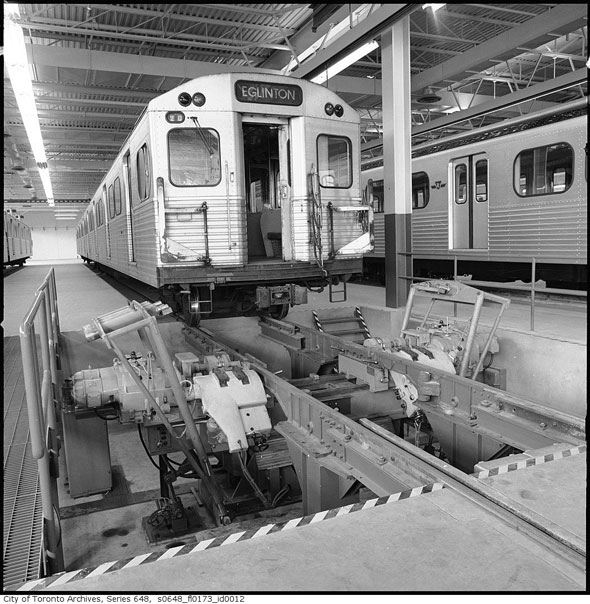 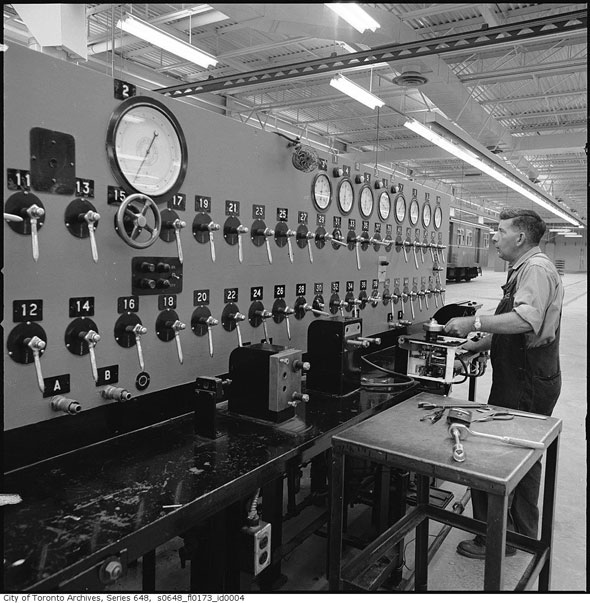 A machinist at work inside the Greenwood shops. 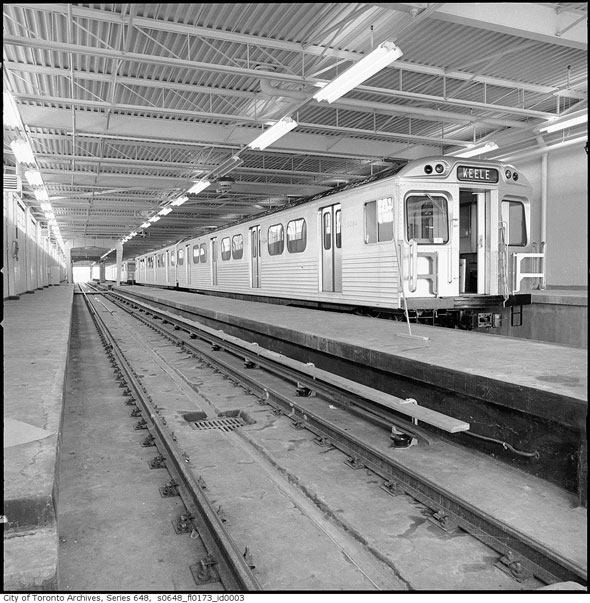 Though Keele was briefly the western terminus of the Bloor-Danforth line, an extension to Islington station was already under construction when the line opened in 1966. 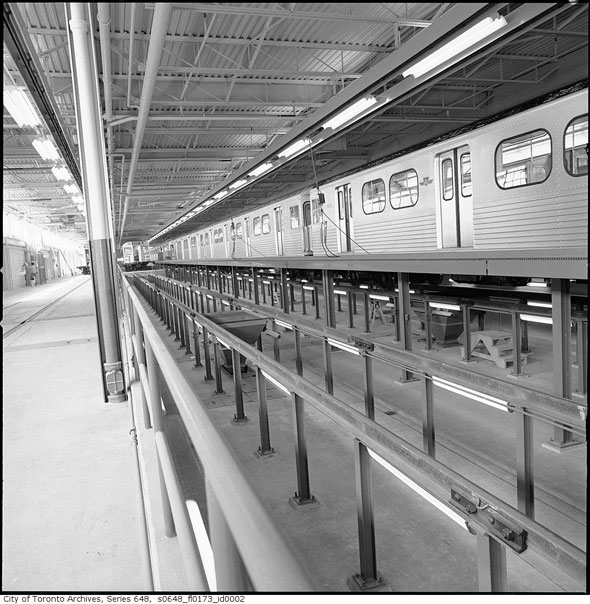 These sunken bays allowed workers to access the underside of subway trains. 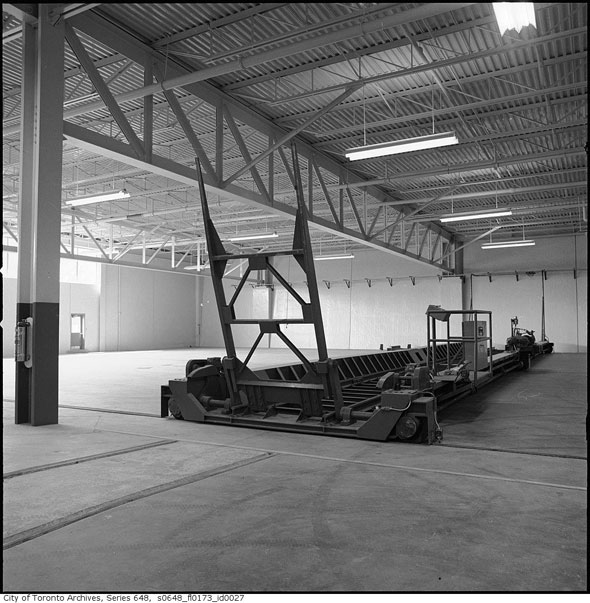 This frightening looking device allowed trains to be moved around the yard from right to left instead of just forward and backward on rails. 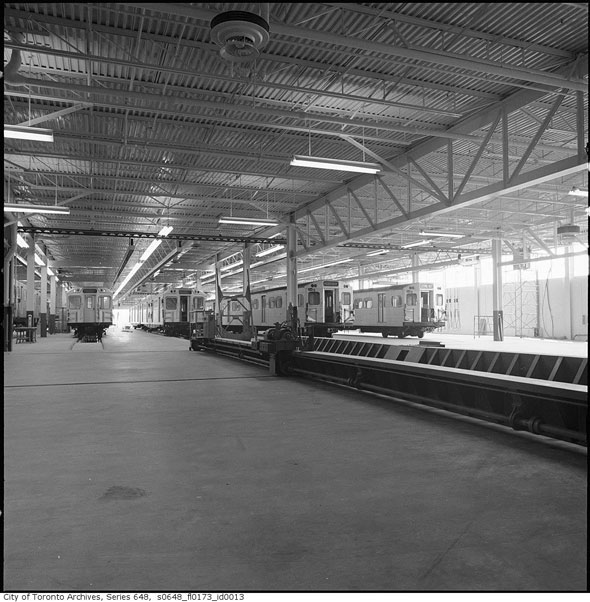 Four vehicles await service within the shelter of the indoor shops. 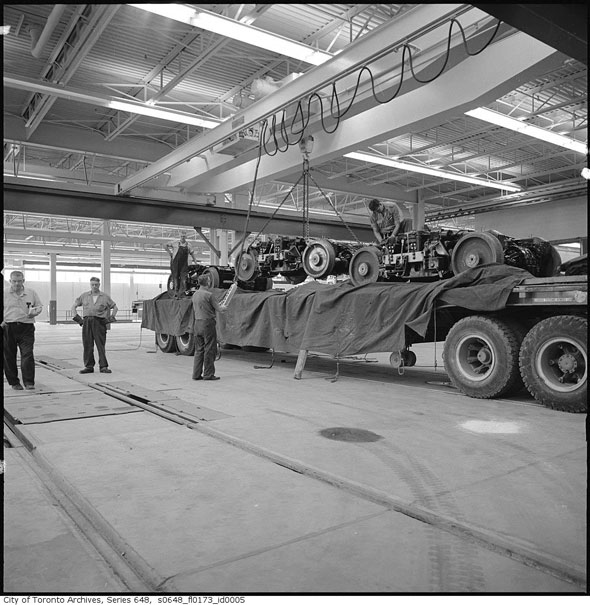 Trucks--the proper name for a set of wheels--are unloaded from a flatbed truck after delivery to the Greenwood yard. 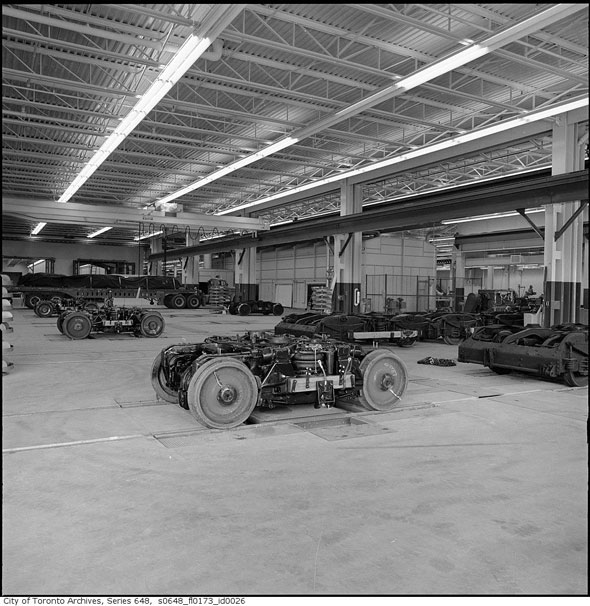 Trucks in storage prior to installation. 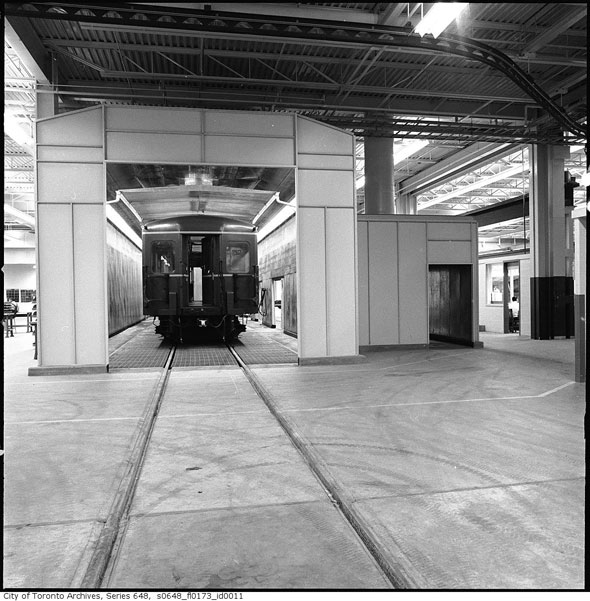 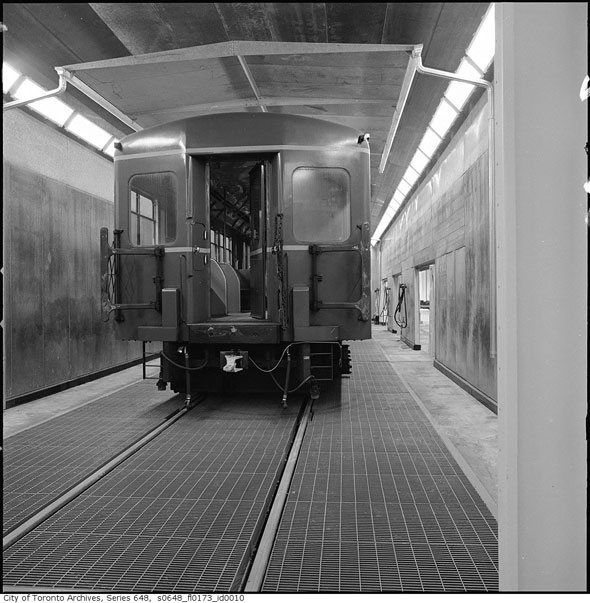 The red Gloucester cars had already traveled more than 5,750 kms before entering service. Built in England, shipped across the Atlantic to Montreal and carried by rail to Toronto, the steel-bodied fleet of 104 cars ran for more than 36 years before being removed from service. 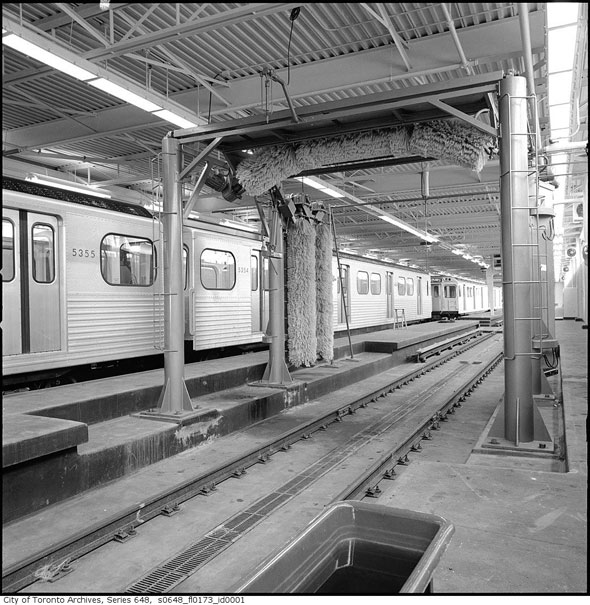 These rollers work just like a car wash, scrubbing off muck and grime from the exterior of the subway. 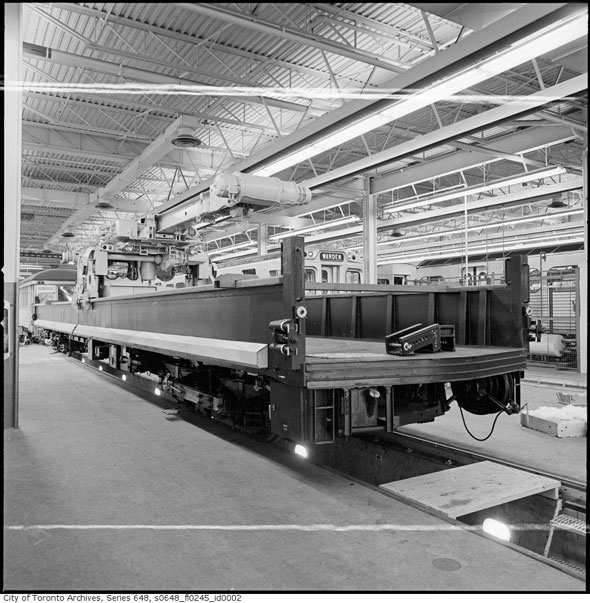 A Japanese-made work locomotive used for pulling equipment to work sites within the subway network. The canary yellow vehicle lasted until 2009. 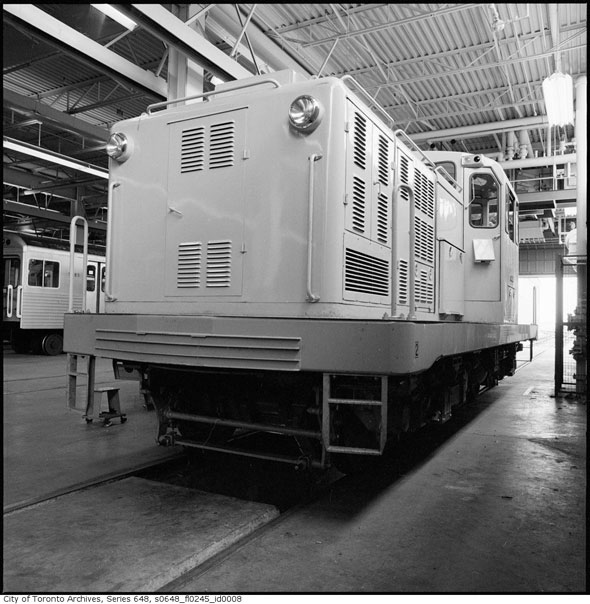 Later numbered RT-13, this subway crane car was also made by Nippon Sharyo Siezo Keisha Ltd. Its heavy lifting capability was used to move concrete track bed panels within the confined space of the subway tunnels. 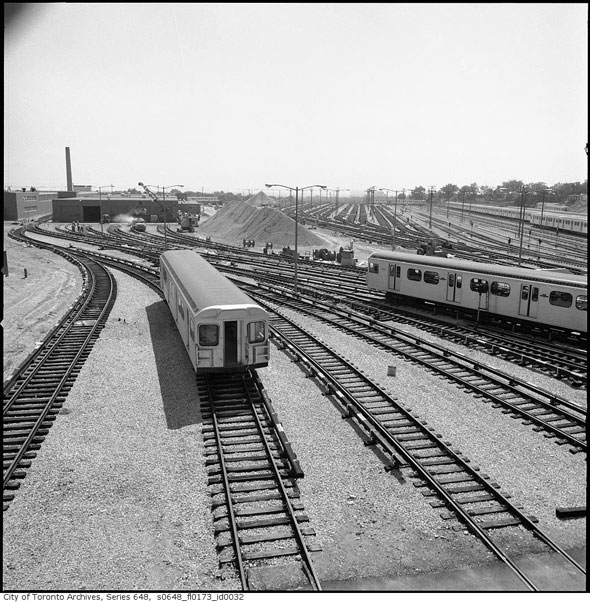 An H1 without a roll sign or lights outside one of the service buildings. 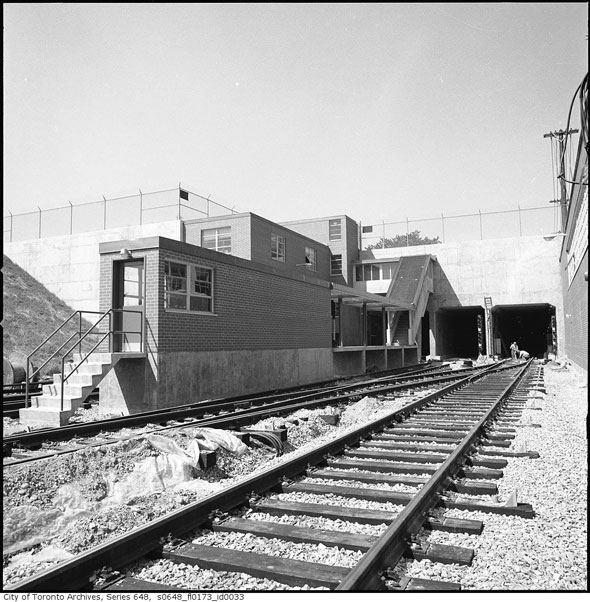 A small platform used by drivers at the entrance to the subway portal. From here, trains head north via a complex, split-level intersection beneath Danforth Ave. to enter service. 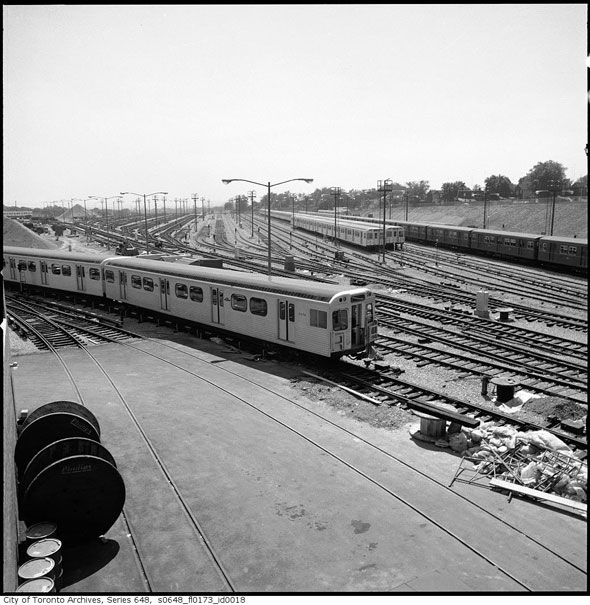 View of the extensive outdoor storage space at Greenwood. During rush hour, few trains remain in the yard. At night, it's close to full. 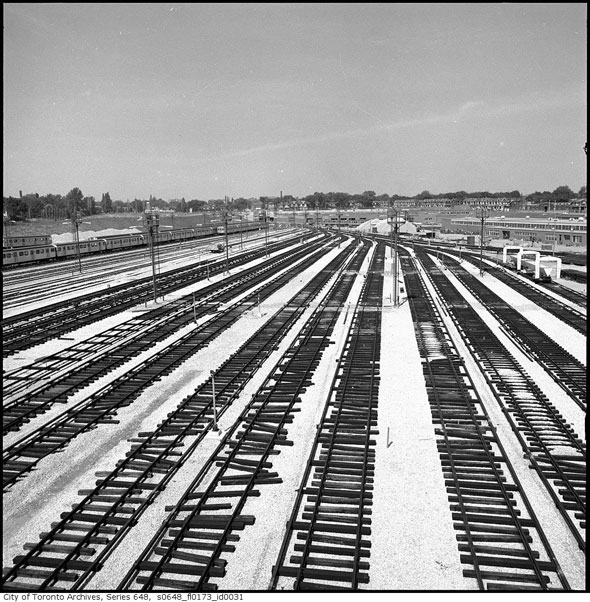 Specialized pieces of track for the Greenwood yard were also made in Japan by Nippon Sharyo Siezo Keisha Ltd. In this photo, many of the wooden sleepers that keep the metal rails in place haven't been fixed in place. 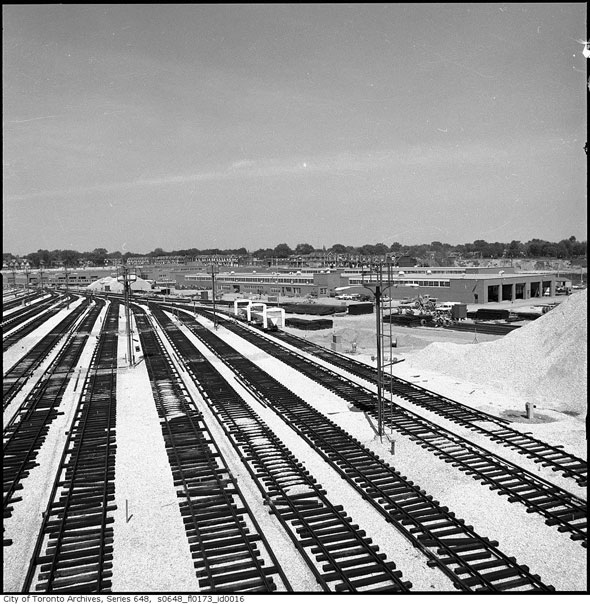 When the Scarborough RT opened in 1985 Greenwood also took on responsibility for major repairs of the SRT vehicles. Because there's no direct link between the RT and subway tracks, cars are lifted off the tracks at McCowan and moved via road. 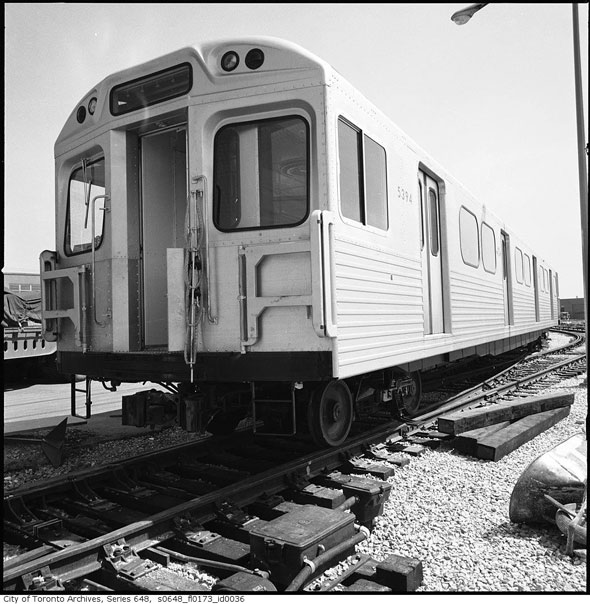 One of the defining features of the Bloor-Danforth line when it opened was "interlining," which allowed riders in the east and west to access downtown without changing trains thanks to an $8 million Y-shaped intersection between Museum, St. George, and Bay stations. The analogue "next train" displays on the Bloor-Danforth platforms (and, of course, the abandoned Bay Lower station) are relics from the six-month experiment.