What a year 2014 has been. Rob Ford started the year in a downward spiral of alcohol and drugs and finished it as a cancer patient. John Tory took over as mayor, Jian Ghomeshi was charged with sexual assault, and wind, rain, and snow pummelled the city. Toronto got new streetcars and saw one of its most famous music venues saved from closure.

As we prepare to ring in 2015, here are the top Toronto news stories from the last 12 months.

John Tory elected mayor
When Olivia Chow entered the race for mayor in January, it seemed like the job was hers to lose. Fast forward to October and the former Ontario PC leader and head of Toronto CivicAction John Tory, along with Doug Ford, had confined her to a distant third place finish. Right now, Tory is enjoying the obligatory surge in popularity that greets incoming politicians, though it remains to be seen how he will navigate the treacherous waters of Toronto politics long term.

Rob Ford's downward spiral
At the peak of the crack video scandal it seemed like Rob Ford's head would surely roll at any moment. Without a proper removal mechanism available to the city, Ford ploughed doggedly onward in 2014, getting caught ranting in Jamaican patois, drinking in a B.C. pub after hours, and making racist remarks in a bar as more shocking details from the crack video investigation were released via police documents. Ford eventually checked into rehab in April and quit the election race in September.

Just when the story of Rob Ford's mayoralty looked like it couldn't provide any more twists, doctors confirmed that the city's chief magistrate had been diagnosed with a malignant liposarcoma, a rare and difficult cancer of the soft tissue.

Rob Ford appears on Jimmy Kimmel Live
The most utterly surreal moment in a seemingly endless string of bizarre Ford-related episodes came in March with the mayor's hotly anticipated appearance on Jimmy Kimmel Live. Rob, with brothers Randy and Doug, flew to California to take part in the talk show, apparently unaware they were to be publicly mocked. Ford threw Ford Nation t-shirts to the audience, talked about savings and efficiencies, and urged Toronto police chief Bill Blair to release the crack video while his hometown collectively cringed. 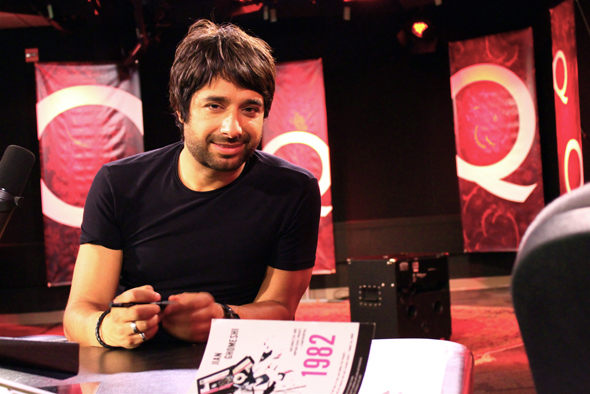 Unbeknownst to his legions of listeners, CBC radio personality Jian Ghomeshi was apparently leading a violent double life. For years, his accusers allege, the host of Q would punch, slap, and hit women in the bedroom suddenly and without consent. There were also reports of explicit conduct at work. When the CBC dismissed Ghomeshi in Oct. it set in motion a chain of events that would lead to the radio host being charged with four counts of sexual assault.

The El Mocambo saved from closure at the 11th hour 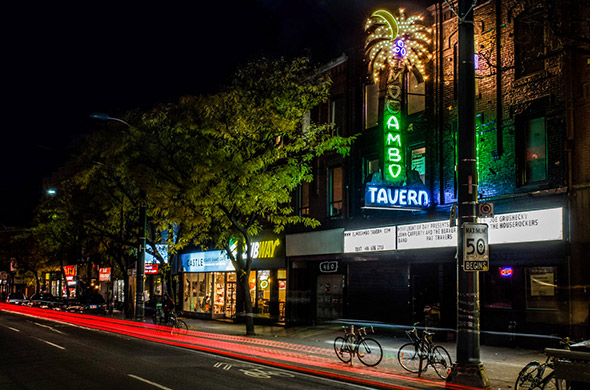 Just when it looked like one of Toronto's most famous nightspots was set to close for good, Canadian finance "rock star" Michael Wekerle snatched the El Mocambo from the jaws of possible redevelopment in Nov. It's still not clear what will become of the music hall that has hosted the likes of the Rolling Stones, Blondie, The Ramones, and U2, but it appears the doors will remain open for the foreseeable future.

Wild weather rips through the city 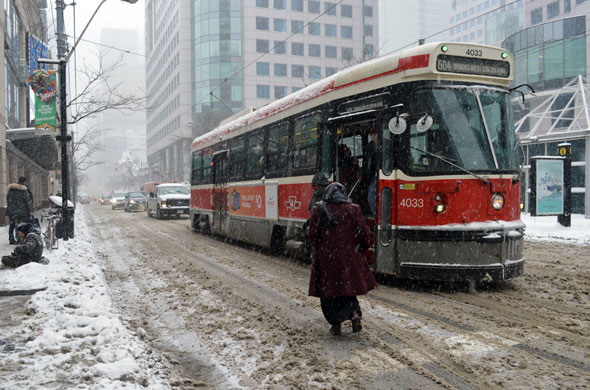 2014 began with Toronto chipping its way out from the ice storm that left thousands without power over Christmas. During the year, heavy rain, wind, and snow caused extensive damage and made for several seriously sloppy commutes. Without a polar vortex, this winter has so far been relatively tame by comparison. 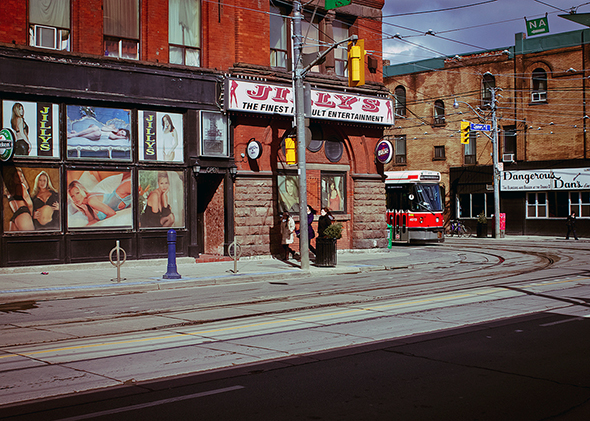 The Broadview Hotel at Queen and Broadview had been ripe for a Gladstone-style makeover for years. With the surrounding Riverdale neighbourhood undergoing rapid gentrification the last decade or so, news that developer Streetcar planned to turn the building into an upscale hotel and restaurant was perhaps not entirely surprising. Detailed plans for the hotel haven't been released, but work is already underway inside. 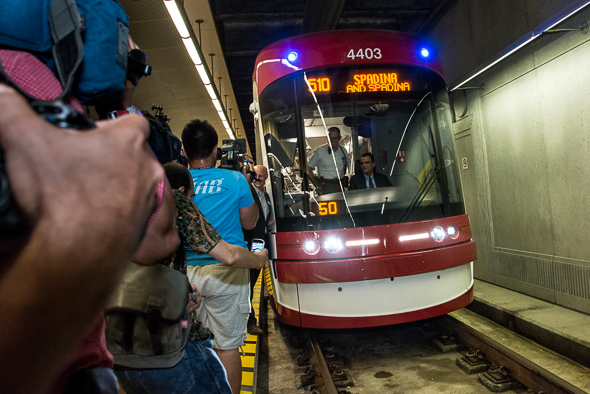 It has been more than 30 years since Toronto unveiled a new design of streetcar, but finally this August two of the long-awaited new low-floor Bombardier vehicles collected their first passengers on Spadina Ave. Toronto will have to wait until the end of the decade before the rollout is complete, though at long last the city, province, and the TTC are making improvements to the city's vital surface rail fleet. 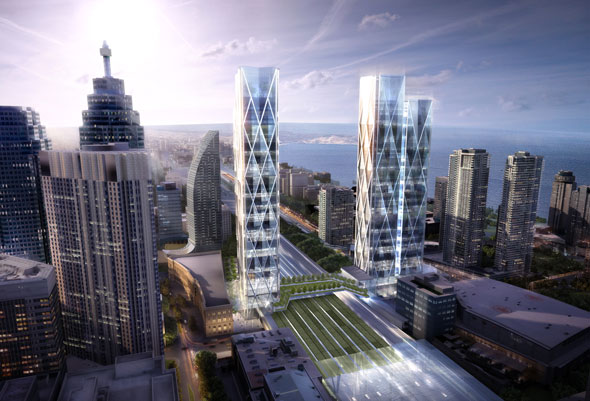 We still don't know much about IvanhoĂŠ Cambridge's plan to build a "sky park" over the Union Station rail corridor. The project was officially unveiled in September with designs that showed two 48-storey office towers and a new GO bus terminal for the east side of Bay St. Most remarkable, however, was the developer's plans to build directly above the rail tracks, a first for a Toronto construction project. 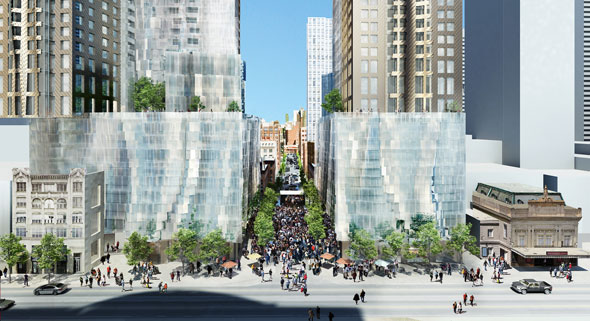 When David Mirvish and Frank Gehry unveiled redevelopment plans for the north side of King, east of John, the theatre magnate and renowned architect envisioned three sky-high residential towers. The project was scaled back to include just two buildings during the approval process, but if the latest designs are anything to go by very little has been sacrificed in terms of design. 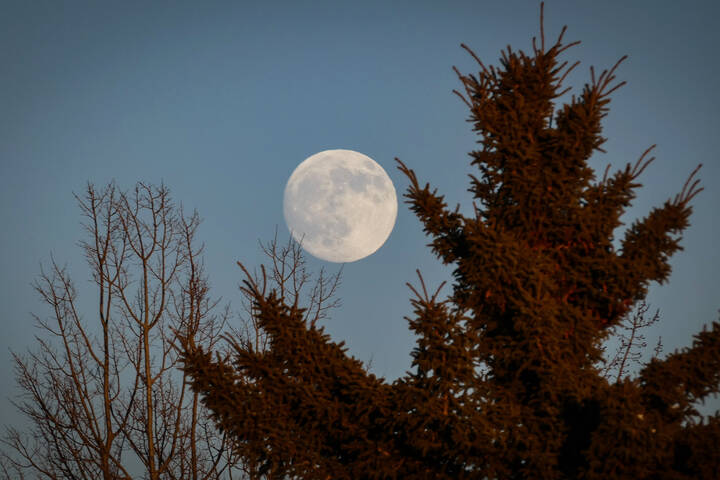 Toronto mayor says it's time to start talking about reopening