This is how much the Toronto skyline has changed since 1879

From the rise of the Financial District to the birth of the condo tower, the degree to which Toronto has developed since the mid 1960s is nothing short of profound, But what about before the rise of the modern skyscraper in Toronto?

The growth this city has undergone each decade since the 1870s is actually remarkable. In an effort to visualize this, I've collected a series of bird's eye maps and photos of Toronto. They show a city constantly on the rise but with with some touchstones that remain the same.

Highlights from one of our earliest bird's eye view of Toronto include a visible Garrison Creek, Union Station II, the Third Parliament Buildings (at Front and Simcoe), the early Distillery (District), and a burgeoning U of T campus amongst other things. View in high resolution here. 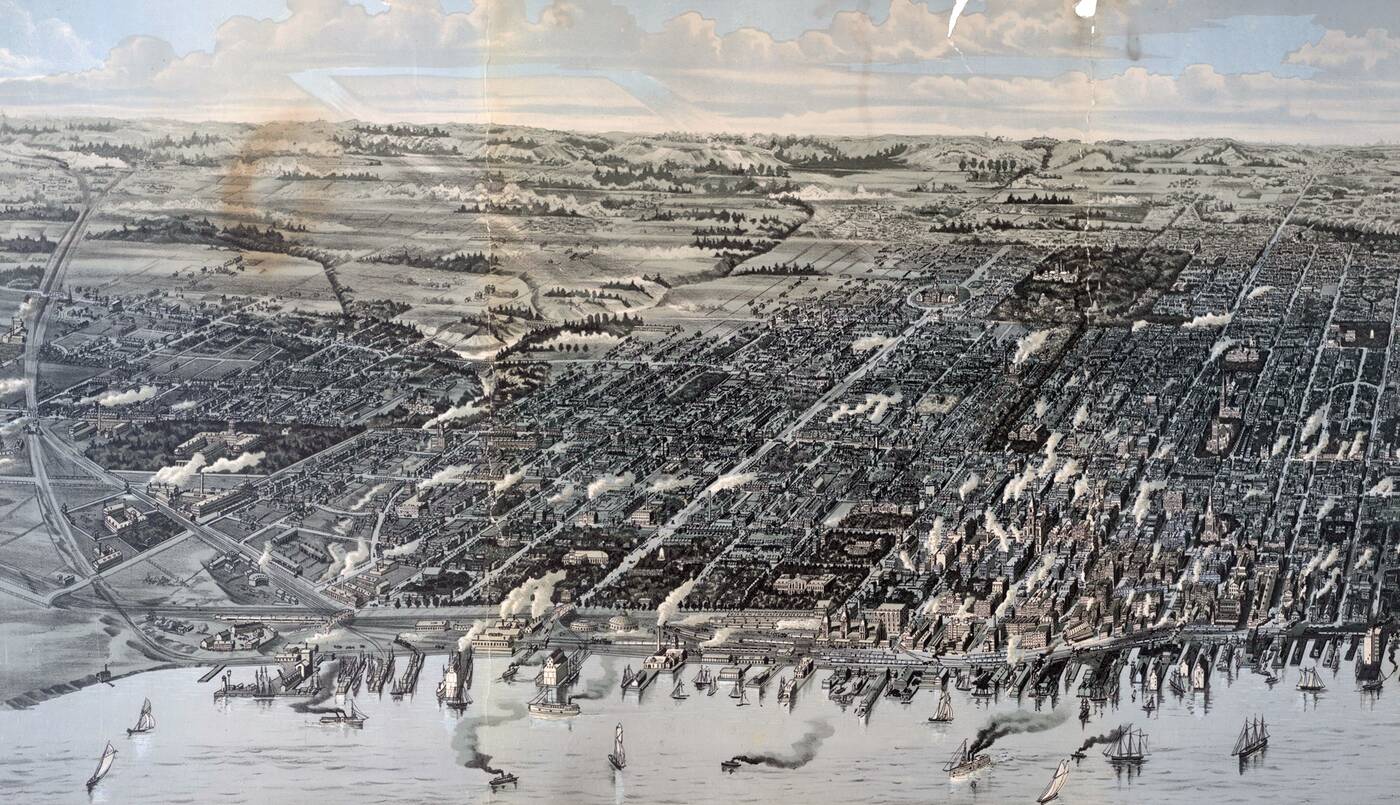 This map gives a good indication of the crucial importance of the harbour to 19th century Toronto, but also noteworthy is the fact that Yonge St. is the only thoroughfare that reaches significantly beyond Bloor St. View in high resolution version here. 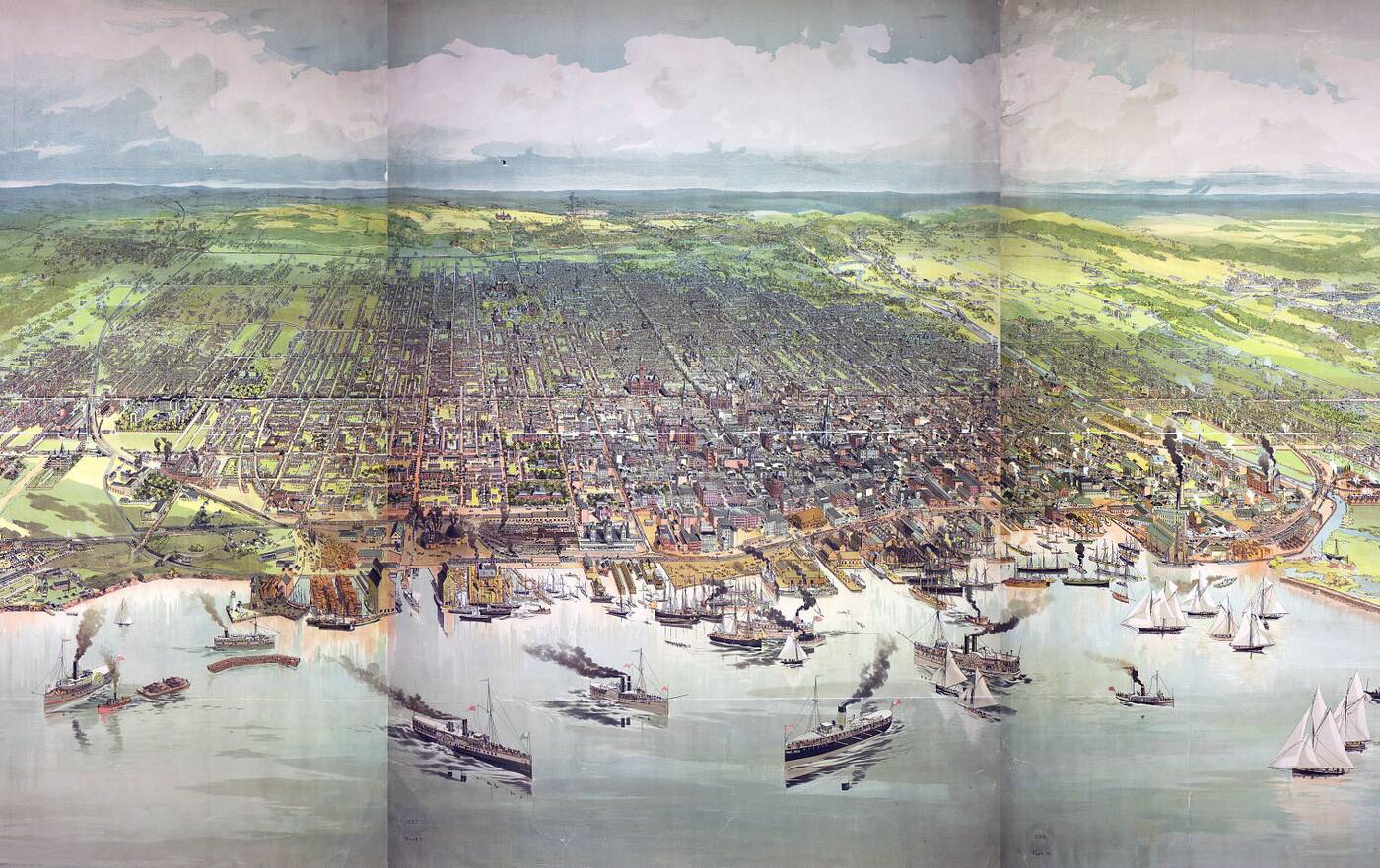 By 1893, Garrsion Creek is on its way to being buried altogether. Old City Hall makes an early appearance (it hadn't been built yet, but the mapmaker's often included future structures of note), and the Don River has already been significantly straightened. The city is becoming progressively more industrialized. View in high resolution here. 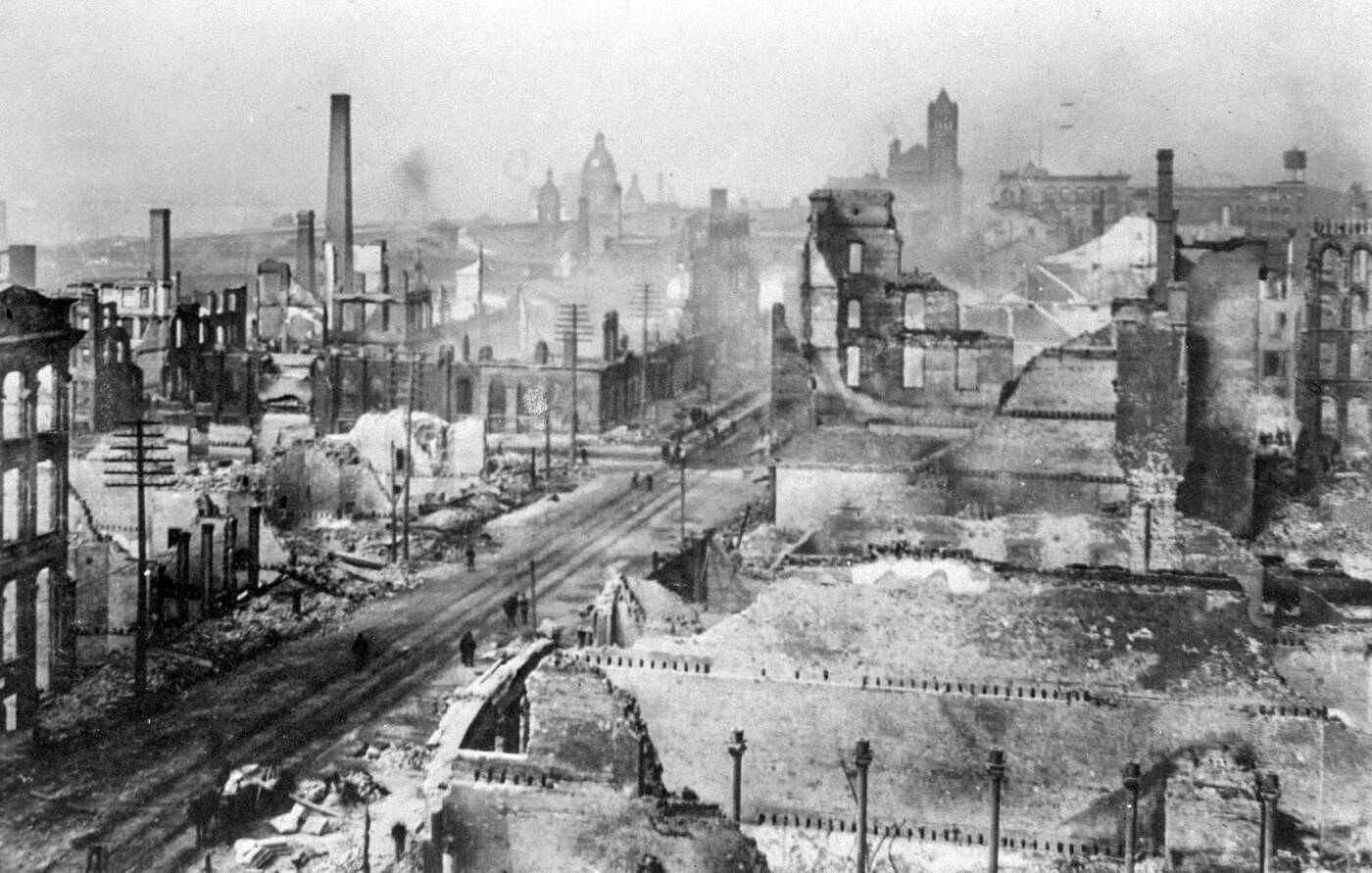 The Great Fire of 1904 decimated the downtown core. Toronto spent the next decade rebuilding the Financial District. 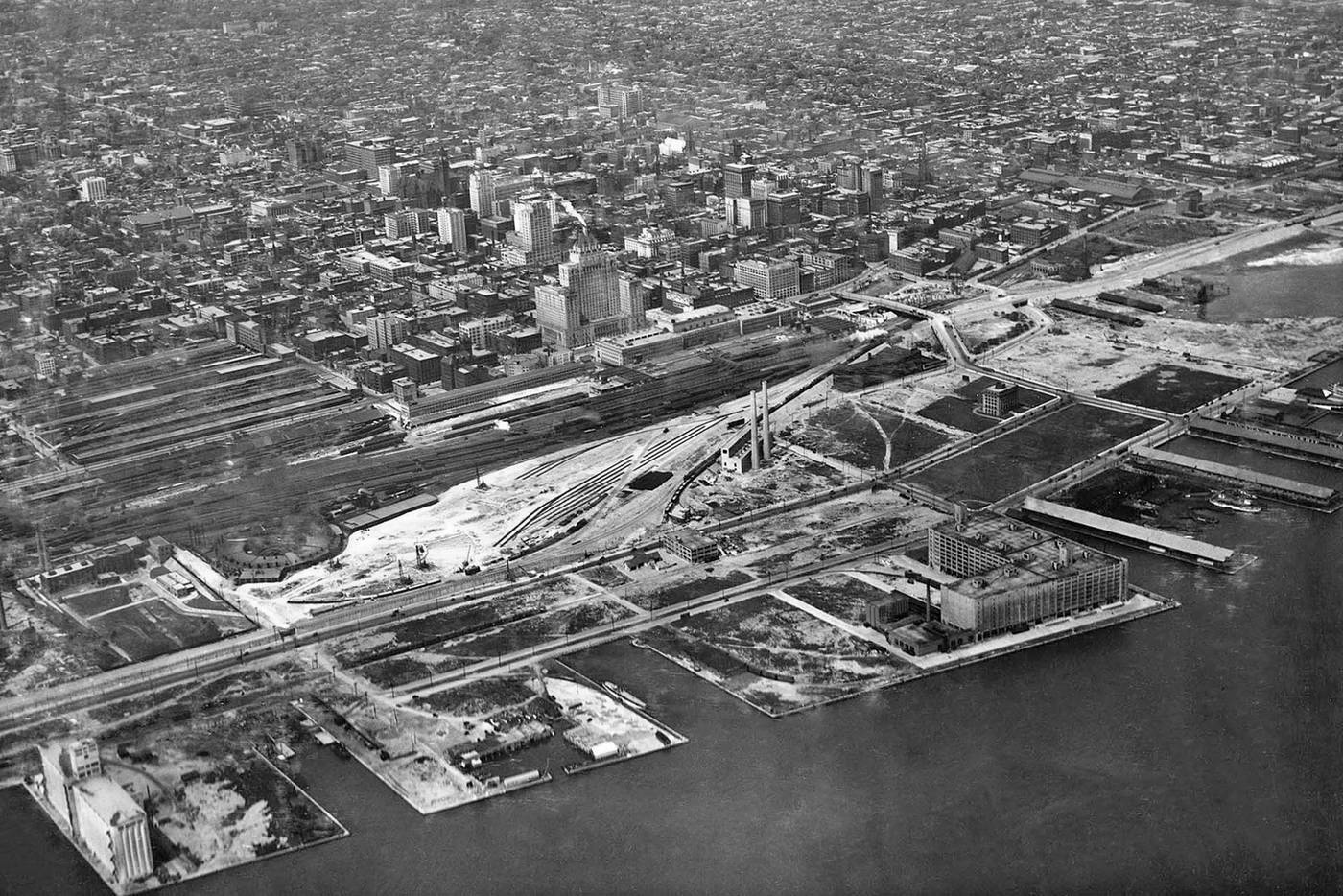 By 1929, the Royal York took its place as the centrepiece of the Toronto skyline. There's a new Union Station, and the land south of Front St. has expanded through various fill efforts. 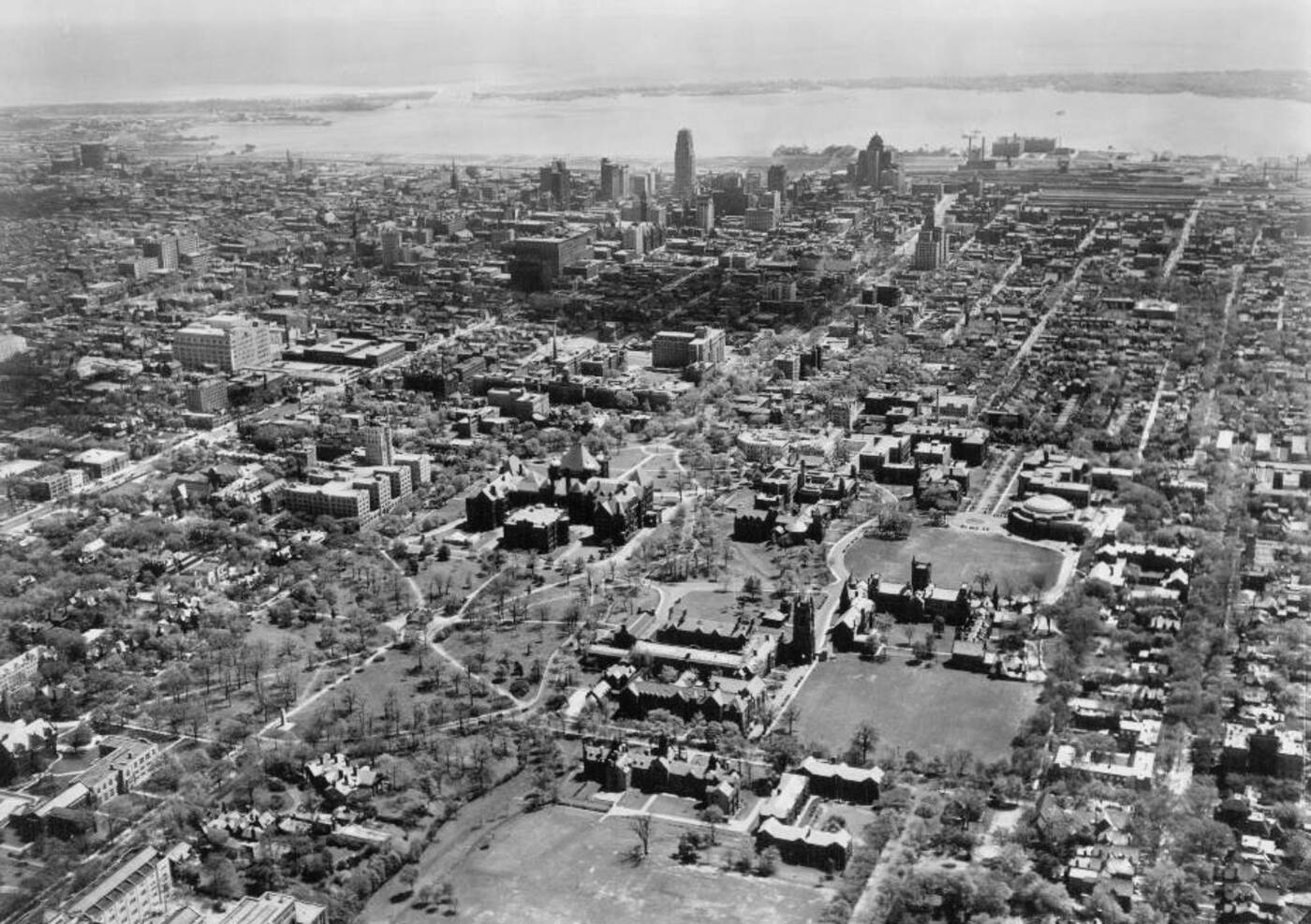 Here we're looking south across the U of T campus in the 1930s. The Canadian Bank of Commerce Building (now Commerce Court) has taken the crown as the tallest building in the city. 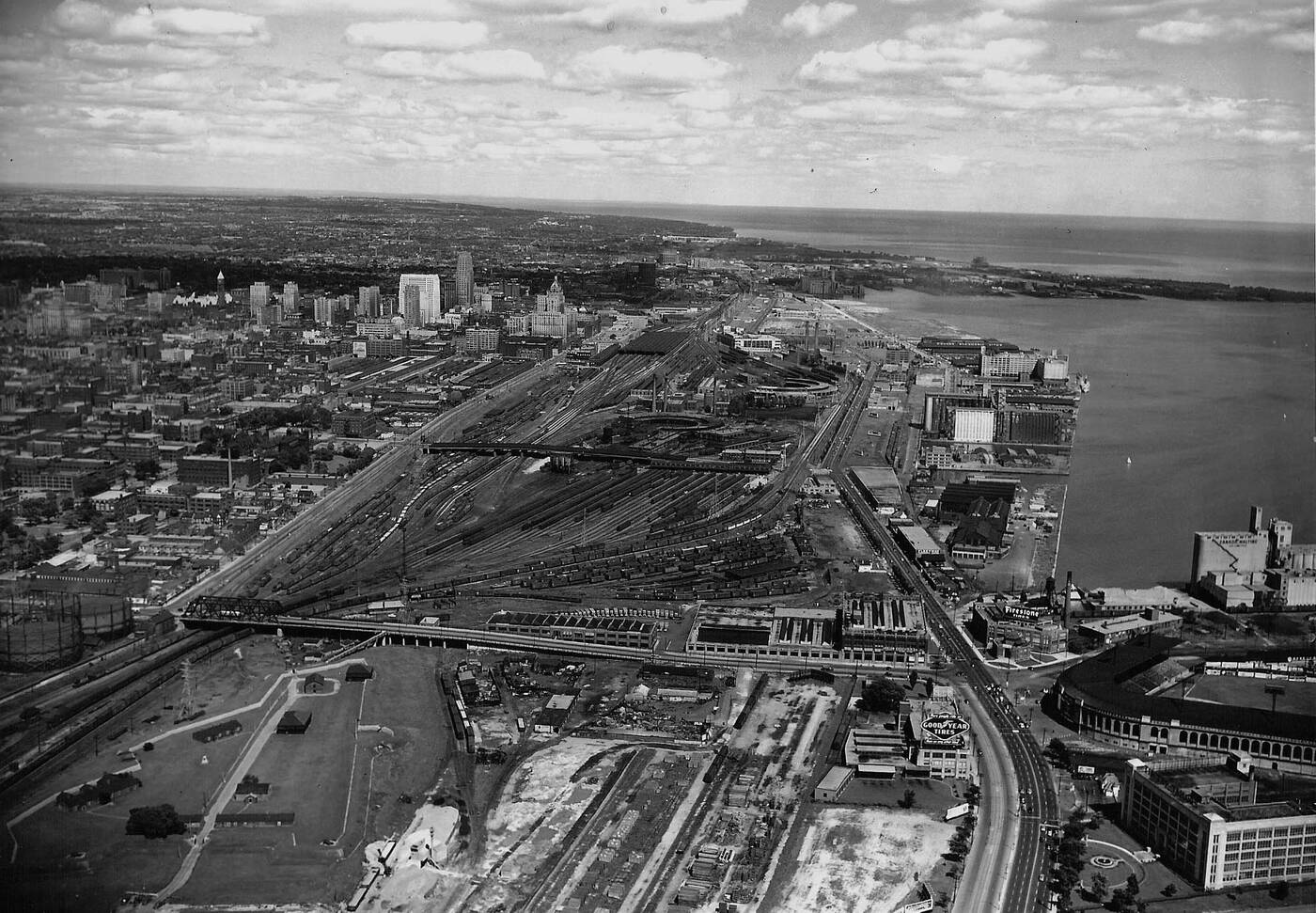 By the 1940s, the Railway Lands have become enormous and the city has pushed almost as far south as it exists today. Toronto is still very much an industrial city, as demonstrated by the busy waterfront area. 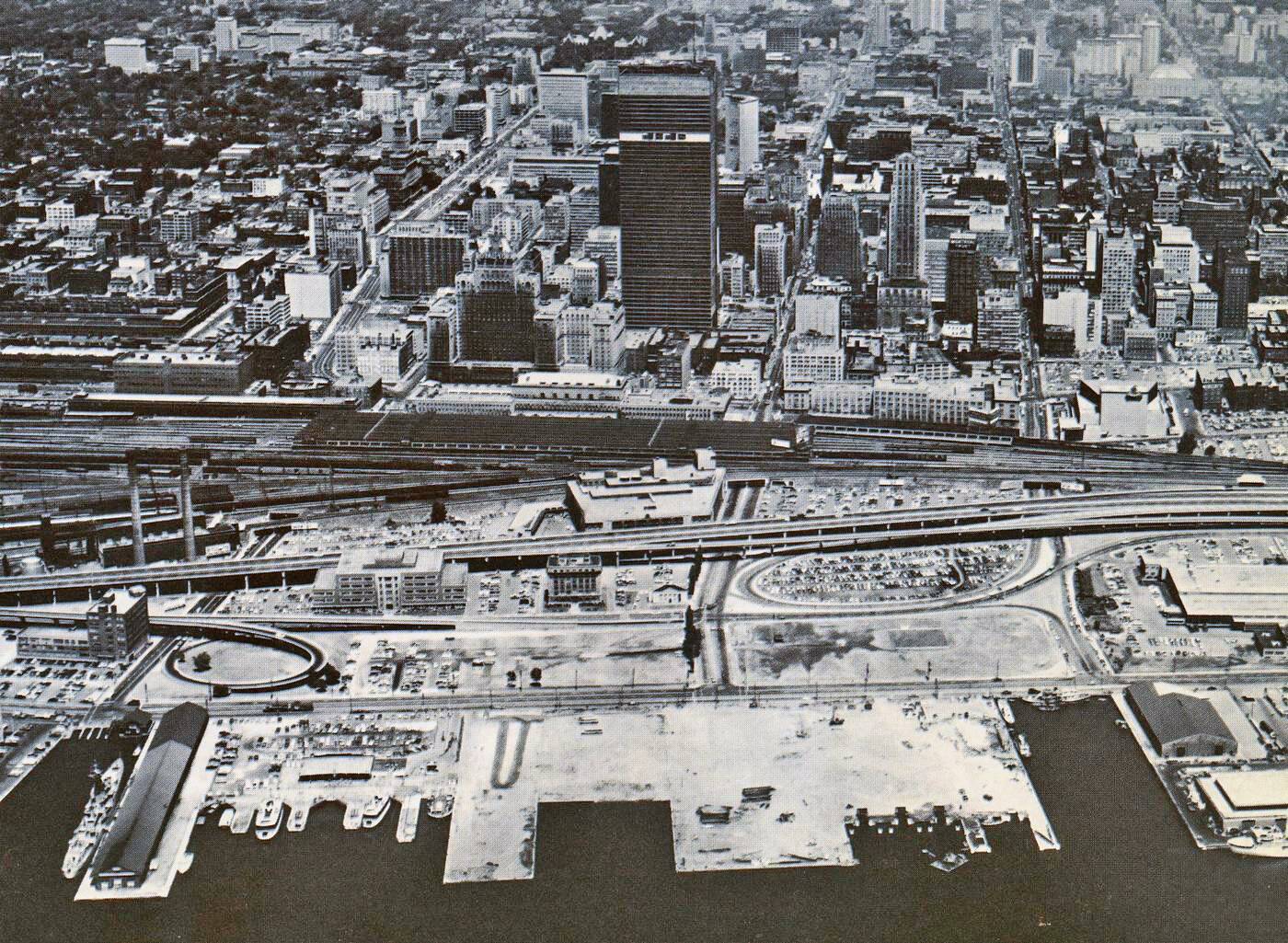 And then Toronto went modern. First with New City Hall (1965) and then the TD Centre. The black steel of the latter ushered in the rise of the modern Financial District. The rest of the city is starting to get denser as well. 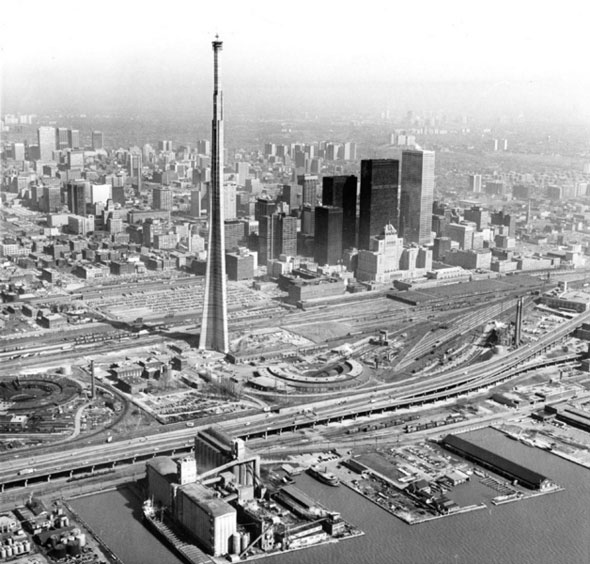 As the CN Tower rises above the city, Commerce Court West has been completed, First Canadian Place is on the way, and a population boom has lead to the rise of concrete apartment complexes across the city. 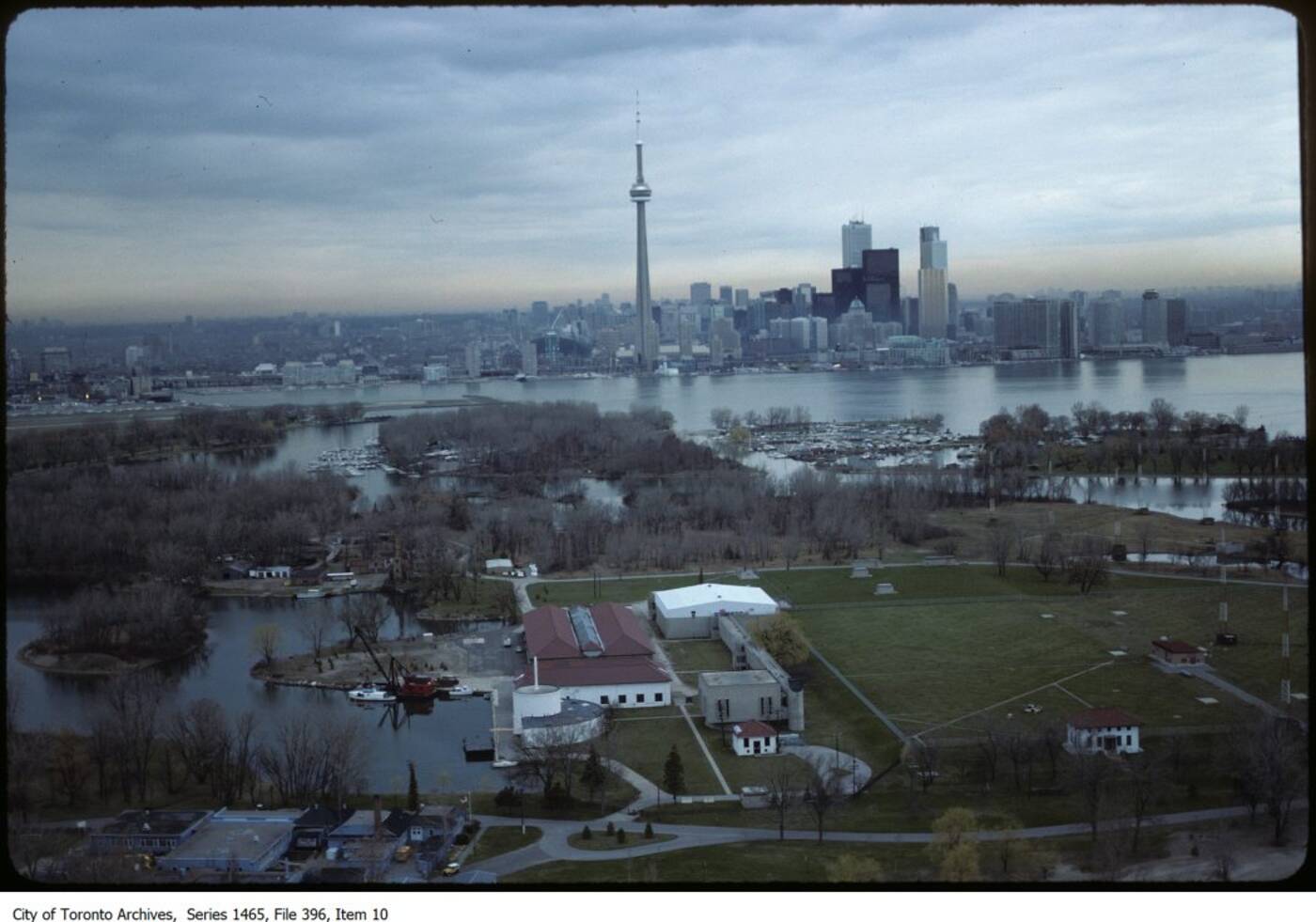 Here we're looking north toward Toronto across the Islands in the mid 1980s before the birth of the SkyDome. The skyline has taken its modern shape, but it still looks sparse, especially between the Financial District and the CN Tower. 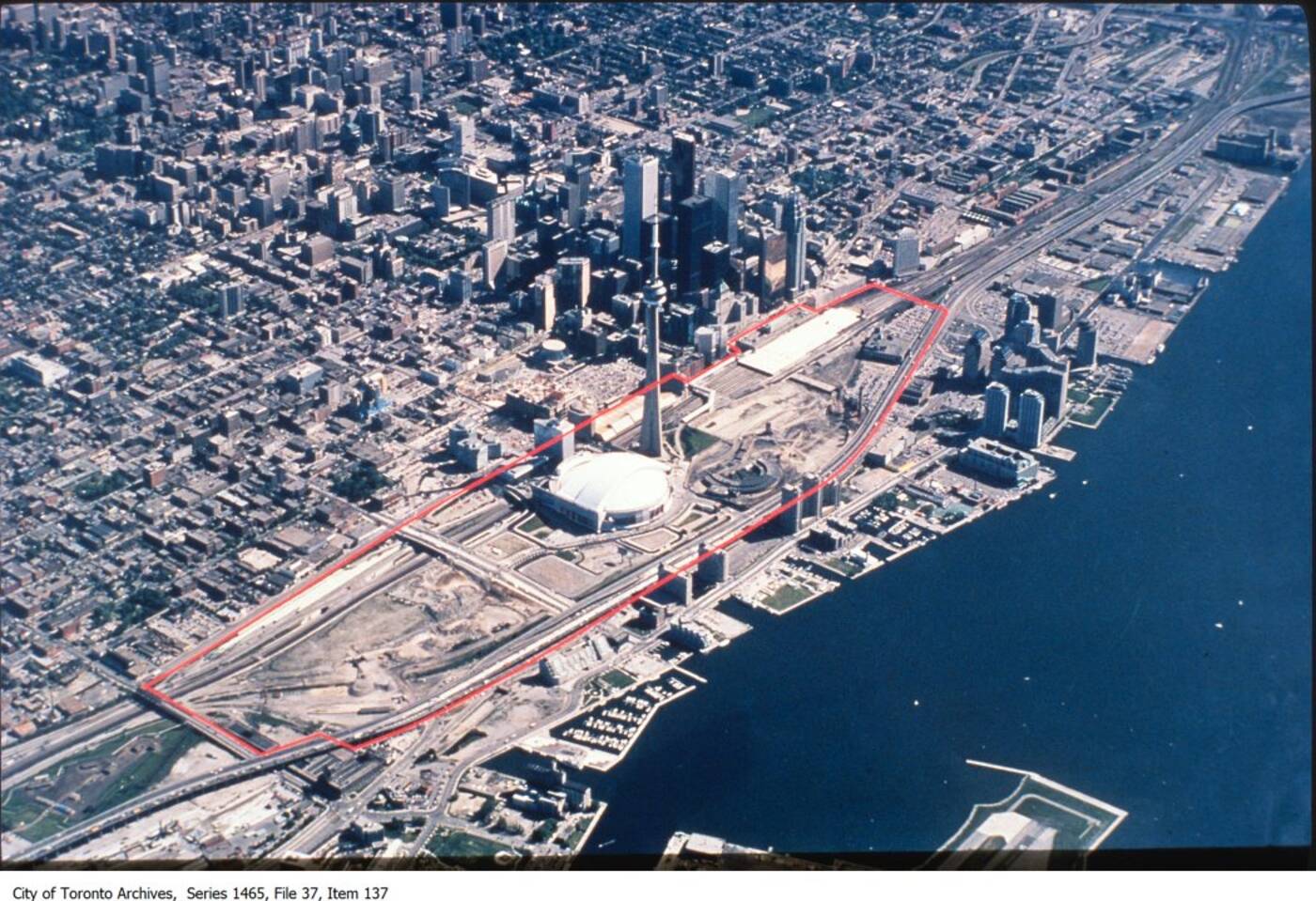 Fast forward to the 1990s, and the waterfront is now home to condos, the SkyDome has arrived (ditto for Scotia Plaza in the 1980s), and the Railway Lands have been mostly razed to prepare for the massive CityPlace condo development. 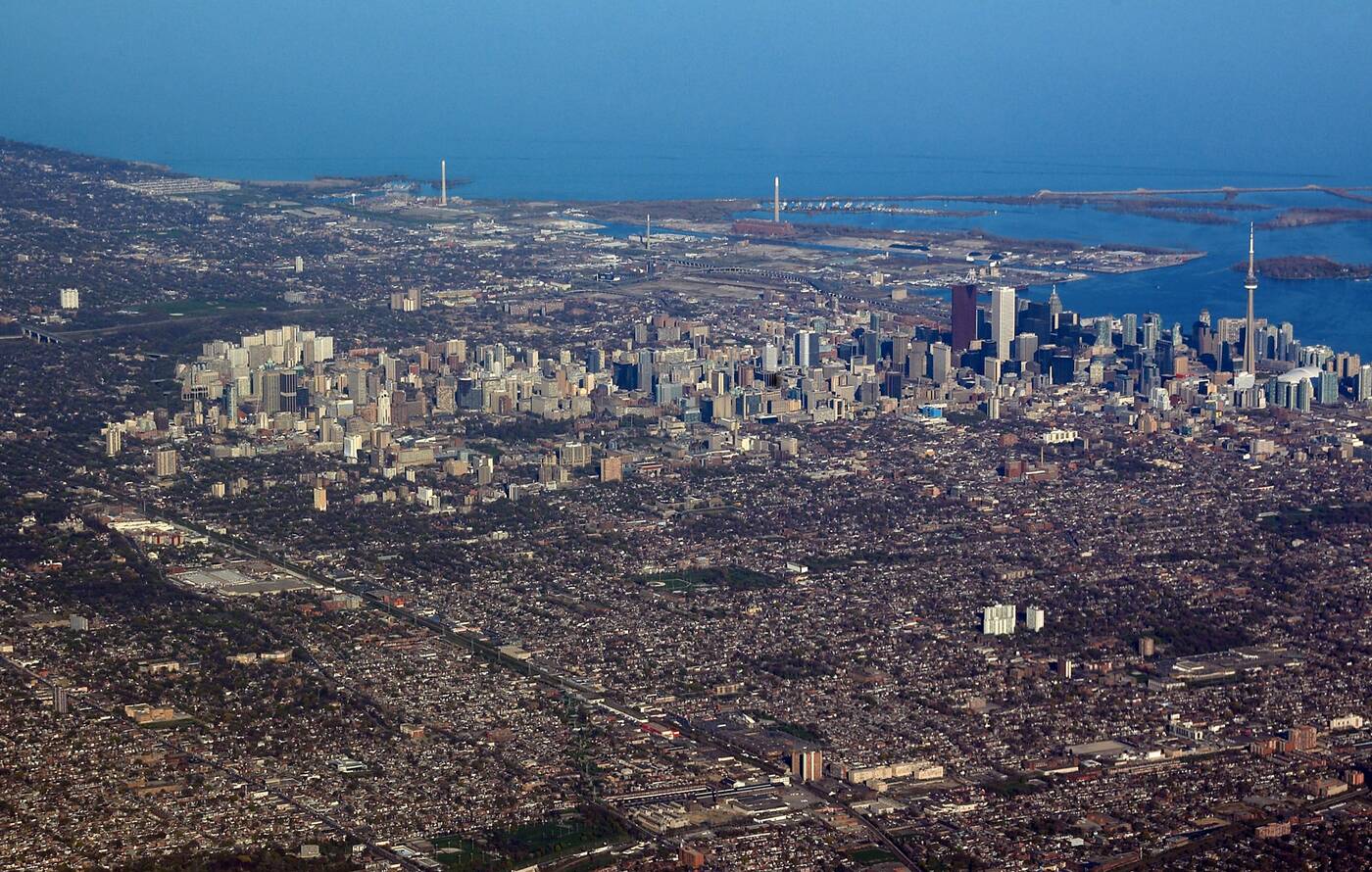 I took this photo during an approach to Pearson International in 2007. While Toronto might not be as dense as some megacities, you can trace an obvious Manhattan-like island of heavier development through the core. 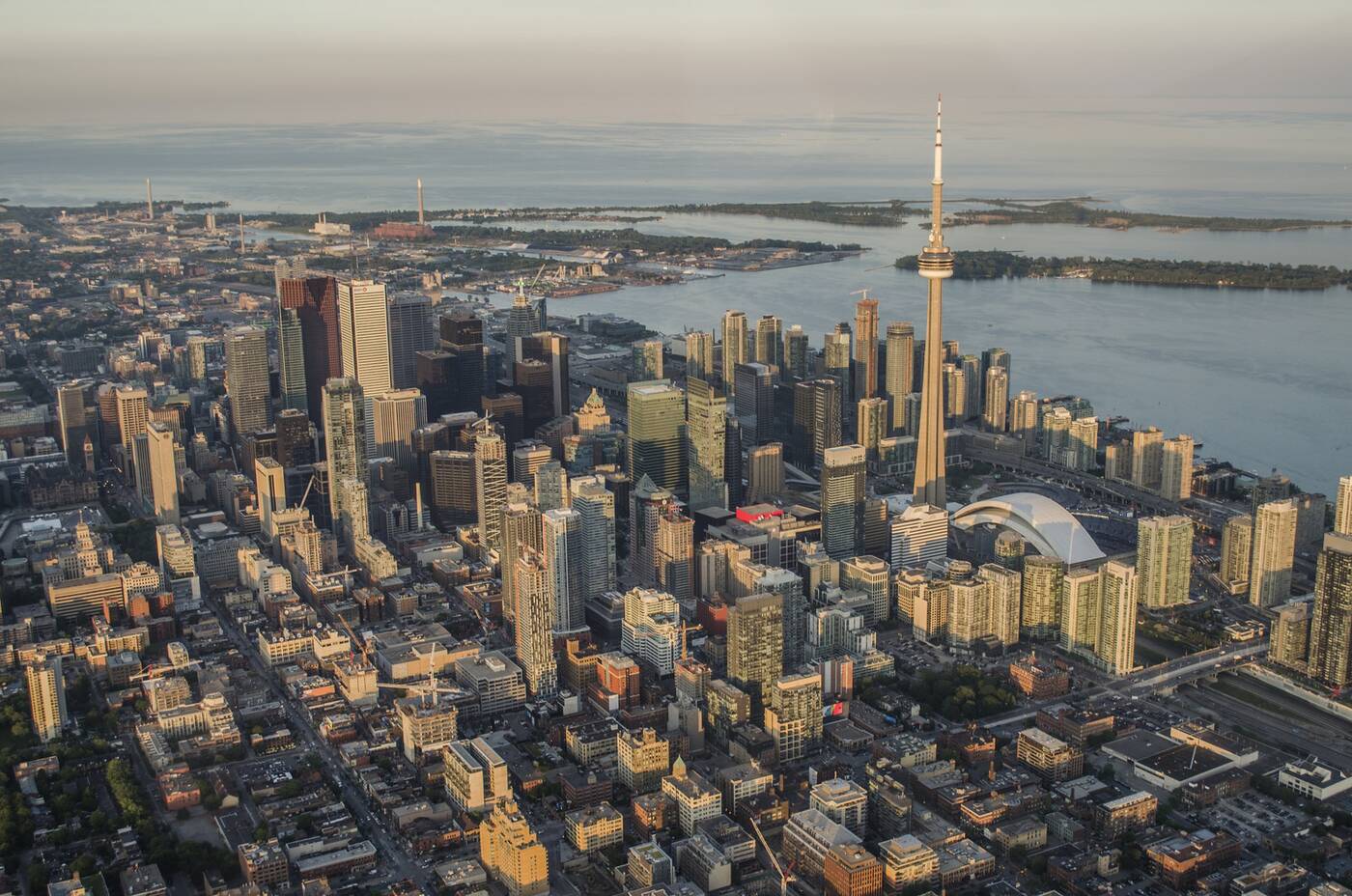 In this photo by Jimmy Wu from June 2014, we get an excellent look at the increasingly dense core of Toronto, featuring the Trump Tower (now St. Regis Hotel), the rise of South Core, and the profound condo development along the waterfront. 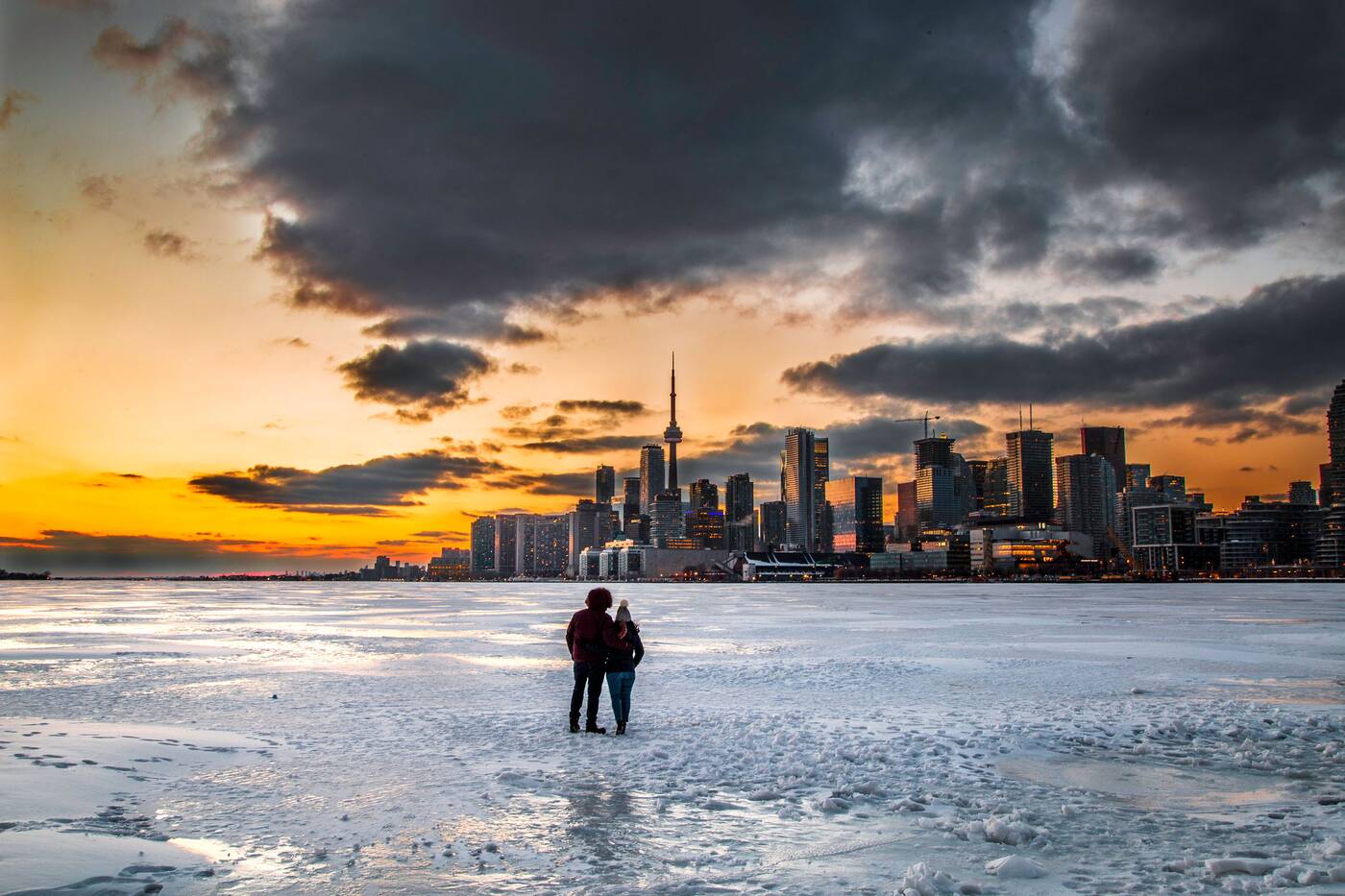 Finally, here's a photo by Samar Ahmad taken high above the Toronto we know today, a city filled with skyscrapers and cranes. For all the development, it's still concentrated in the core. The east and west sides of Toronto are still predominantly low-rise, though a different shot would reveal density in south Etobicoke.