Did you ever hear the one about the guy who fell out a window at TD Centre? Or what about the tale of whale bone under Queen's Quay? Toronto is a hot bed of urban myths, some that are amazingly true, some that contain a tenuous strand of truth, some that are creative but, sadly, utter nonsense (I mean, come on, underground aliens?)

Here's a quick run through five (plus one) of the city's best and most absurd tall tales, starting with one story that's been the preserve of drinkers in Toronto's oldest pub for decades.

THE BOOZE TUNNEL TO THE WHEAT SHEAF TAVERN 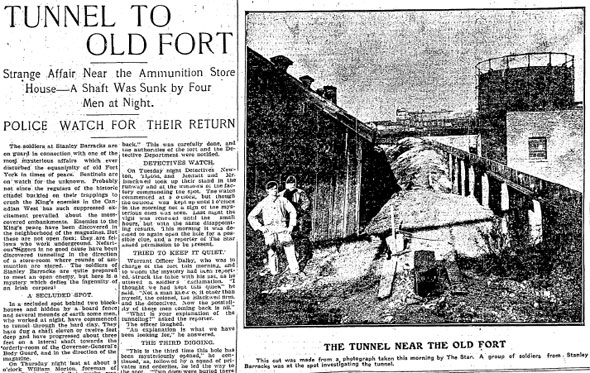 If there's a common thread that connects urban legends from across the planet, it's secret tunnels. Apart from the passage that supposedly connects the flatiron building on Wellington Street with the King Edward Hotel, which I dealt with here, the other famous Toronto subterranean passageway was supposedly built by thirsty soldiers between Fort York and the Wheat Sheaf Tavern at King and Bathurst.

For it to be true, the soldiers would have to have built a tunnel more than 500 metres long without attracting the attention of their superiors. Engineering challenges aside, soldiers at the fort were given a daily beer ration, so it's difficult to imagine the men finding the motivation for such a massive undertaking in libations alone.

That said, a tunnel was discovered at Fort York in Nov. 1904, but not in the direction of the Wheat Sheaf. The shaft, 5 by 2 feet wide and expertly constructed, extended for 15 feet beneath the fort and appeared to be pointed at the blockhouse. After being disturbed, the mysterious diggers failed to return while the site was under discreet observation. At the end of the tunnel was a candle, a blank piece of paper, two bottles, and a shovel inscribed with the initials M.C.M.

Theories abounded for the enterprising dig: a search for treasure left during the American occupation of the city, the tail end of an unfinished escape tunnel from Central Prison, an attempt to access the ammunition storehouse, or a place for "tough men" to hid liquor and carouse at night. None were ever proven and the tunnel was filled in.

THE UFO BASE AT GERRARD AND CHURCH

Spurious reports of weird magnetic disturbances under Gerrard and Church can only mean one thing - aliens, of course. The story generally goes that denizens of some off-world race are hiding beneath the city, presumably hatching nefarious plans, playing with magnets, or launching space ships through the waters of Lake Ontario. It's never explained why the aliens chose to live under a major metropolis and not somewhere more secluded.

As Torontoist writer Patrick Metzger points out, the intersection isn't particularly dangerous for motorists, as is generally supposed by base truthers. The entrance to the nether world is supposedly between two apartment buildings on Parliament Street via the sewer system (talk about inconvenient.) "The Indians near Toronto have legends of these tunnels," according to a writer who uses the pseudonym Commander X. Take that, evidence. 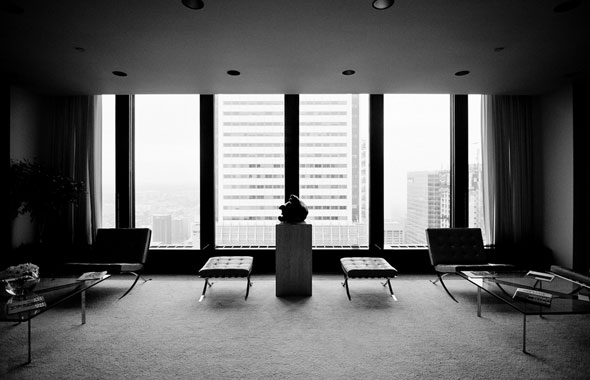 This is my all-time favourite Toronto urban myth because, astonishingly, it's true. At about 5:30 p.m. on July 9, 1993, Garry Hoy, a senior partner at law firm of Holden, Day, Wilson, was performing a bizarre act he had become famous for: running against the glass window of the company's 24th floor office to show off its tensile strength to visitors.

Unfortunately for Hoy, who specialized in security law and mining, the glass took his weight but the frame didn't. The pane popped out of its mounting, sending the hapless lawyer falling to his death in front of a group of horrified co-workers. It was his second attempt to show off the same window that day. "He was one of the brighter lights at the firm, just a super nice guy, a very generous fellow," said Michael Crawford from the company. The death was treated as "death by misadventure" by police.

THE GHOST OF OLD FINCH AVENUE

A quick search of the Toronto Star and Globe and Mail archives didn't shed any light on the origins of the tale. There's no evidence anyone matching the girl's description died in the area under poetic circumstances, so draw your own conclusions.

When the TTC was excavating the trench for the underground streetcar tunnel from Union Station to Queen's Quay, backhoe operator Jose Resendes found something weird. It was a section of whale vertebrae, lodged in the mass of dirt and waste the city south of Front Street is built on.

It was tempting to link the mysterious bone with Piper's Zoo (I know - I did it on this site) but it seems the truth is, sadly, less exciting. It's true, Harry Piper did keep a semi-frozen whale carcass at his strange zoo on the corner of Front and York streets, but it seems its bones weren't the ones dug up in 1987. Carbon dating and pollen analysis by ROM palaeontologist Kevin Seymour dated the bone, a piece of orca spine, to the 1840s, long before Piper set up shop. How it got there is still, happily, a mystery.

Having grown up outside of Toronto, the Cherry Beach Express is a tale I was told while putting this list together. It goes like this: Toronto cops, if they needed to do a little off-the-radar "persuasion," would take prisoners in cuffs to Cherry Beach and rough them up, using a phone book to dull the blows from their truncheons.

It's hard to reconcile Cherry Beach's reputation as Toronto's make out point with the idea of bloodthirsty cops meting out vigilante justice. Band Pukka Orchestra wrote a song commemorating the myth called Cherry Beach Express. "That's why I'm riding on the Cherry Beach Express / my ribs are broken/ and my face is in a mess / and I made all my statements under duress."

There may be some truth to the controversial rumour, however. Thomas Kerr, a homeless man, was awarded a settlement in 2003 after he claimed cops had beaten him at the Port Lands location in 1996. In 2007, Craig Bromell, the former head of the Toronto police union and one of the eight men accused of the beating, said the story was "just bullshit." He was exonerated.