Anyone that regularly hits the streets of Toronto on a bike knows what a tricky little terror streetcar tracks can be. Despite countless successful navigations across the embedded rails, anyone is capable of getting caught out and taking a tumble. This week I look at a couple of ways Toronto could make things safer for cyclists at complex intersections.

After a trip to Alberta last week, Rob Ford discovered he likes public fountains, suggesting one like Edmonton's Churchill Square splash pad be installed near Toronto's City Hall. There are stats on this city's water features below along with a breakdown of what's in store for the new, revitalized stretch of Queens Quay now under construction.

This week's photograph by Jackman Chiu shows Nathan Phillips Square earlier this week on the first anniversary of the death of NDP leader Jack Layton. The public space has long been a focal point for outpourings of emotion thanks to its location opposite City Hall. It's features include Henry Moore's sculpture "Three-Way Piece No. 2," usually called The Archer, a peace garden, the reflecting pool with it's Freedom Arches and slab of the Berlin Wall, and a statue of Winston Churchill.

Staying Out of the Groove 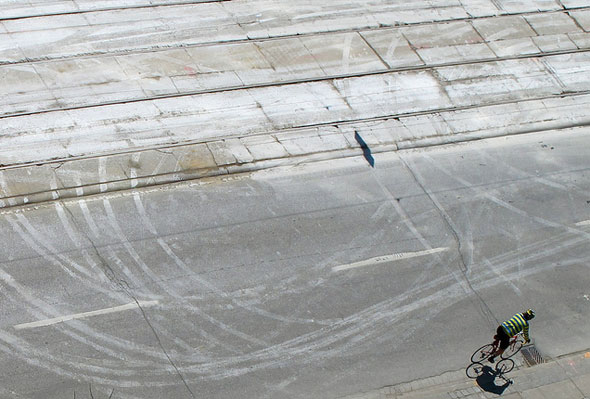 The dangers of snatching a wheel in streetcar tracks were tragically underscored this week by the death of a cyclist on Wychwood Avenue near St. Clair West. The accident, which occurred on a disused section of track near the former St. Clair Carhouse, prompted calls for the section of track to be torn up.

But wait. What about the other 304.6 kilometres of track in the TTC's system - isn't that just as dangerous for cyclists? In an apparent attempt to boost safety, councillor Denzil Minnan-Wong ludicrously suggested banning cycling on the street.

One more sensible solution the city could consider involves adding veloSTRAIL, a special insert that fills the troublesome groove with a flexible, rubber-like material able to crush under the weight of a streetcar yet stay firm for bicycles. The material is commonly used at railroad crossings but it could work at complex streetcar intersections were tracks curve under cyclists' wheels. Wheelchair users and people pushing strollers would also benefit at pedestrian crossings.

At present, the City of Toronto does not track the number of bicycle accidents that do not involve a collision, so there are no firm stats on how many bikers fall each year as a result of streetcar tracks.

A cheaper option would be to paint guiding arrows at complex intersections and install signs to help riders chose the best route over the tracks - Cycle Toronto recommends hitting the track as close to 90 degrees as possible. 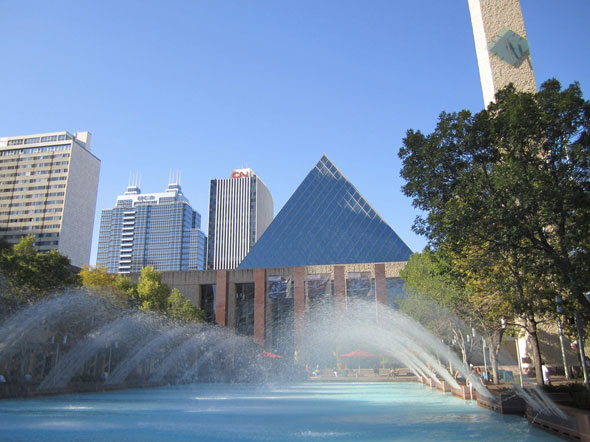 On a working holiday to Edmonton last week, Rob Ford took a shine to the Big E's fountain/splash pad/skating rink in Churchill Square, near City Hall. Without realizing its similarities to Nathan Phillips Square's reflecting pool, Ford declared he would like to see something just like it in Toronto - but don't forget, the revitalization of NPS is pure gravy.

Currently there are 109 splash pads, 107 wading pools, and 58 outdoor swimming pools in the City of Toronto. Overheated individuals can even wade and splash until 11:45pm if the temperature is 30 degrees Celsius at 3:00pm, there is zero chance of a thunderstorm (yikes!), and the weather is consistently hot over a period of a few days.

The mayor might be on to something, though: there aren't very many options for water-based fun near City Hall and wading is prohibited in the reflecting pool.

The Quay to the City 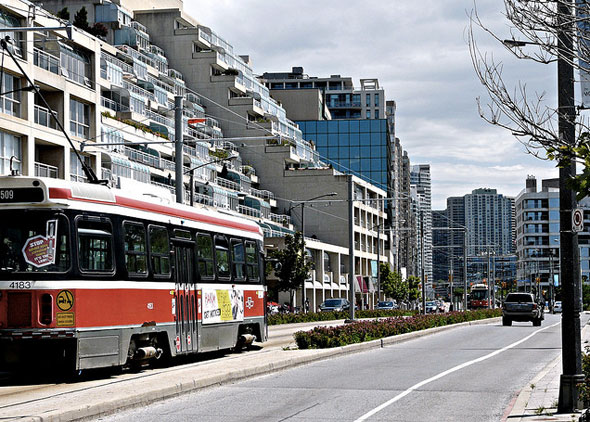 Oh, Toronto's waterfront. Maligned, abused, and severed from the city's downtown by a busy railway, roaring expressway and a wall of buildings. Good thing Toronto has a good boulevard for people to enjoy once they've scurried under thundering vehicles, right? Wrong.

But, never fear, plans are underway to make Queens Quay - "the ugliest urban waterfront boulevard of any major city," according to a Canadian landscape magazine - a "Champs-ElysĂŠes" of North America, complete with bike lanes, trees and a redesigned roadway to be shared by cars and streetcars.

How did it get this way? Queens Quay, like much of Toronto's present waterfront, is built on fill - waste material that includes garbage and rubble from construction projects. The road started life as a service road for the various slips and ports along the once bustling port but gradually fell into decline as industry and shipping slowed on Lake Ontario. The Union Station rail corridor and Gardiner Expressway didn't exactly help put the place on the map, either.

The revitalization involves demolishing the existing streetcar right-of-way and current roadway and installing a new, reconfigured street. 1.5 kilometres of road between Yo Yo Ma Lane and Bay Street will get new telephone and Internet infrastructure, an upgraded electrical supply, and replacement sanitary and storm sewers.

What we discovered this week...