The history of the long lost Taddle Creek in Toronto

Taddle Creek once took pride of place in the neighbourhoods it passed through on its gentle route south through the heart of the city to its outlet in Lake Ontario near Berkeley and Mill Street.

Now relegated to a subterranean sewer for its entire length, Taddle has left behind several significant marks on the surface that are still visible today if you know where to look.

Taddle Creek is the most common name for the river, but it was also known as Little Don River, Goodwin Creek, University Creek, Wolz Creek and Brewery Creek for Enoch Turner's brewery once located near the mouth of the river.

Turner also lent his name to the historic schoolhouse on the west side of Trinity Street between King and Eastern Avenue and contributed money to the fund that established the University of Toronto.

Thanks to the work of Lost Rivers, a fantastic Toronto river resource from which the bulk of this information is sourced, we know the creek rose from a small creek-fed pond, which still remains, at Wychwood Park northwest of Davenport and Bathurst. 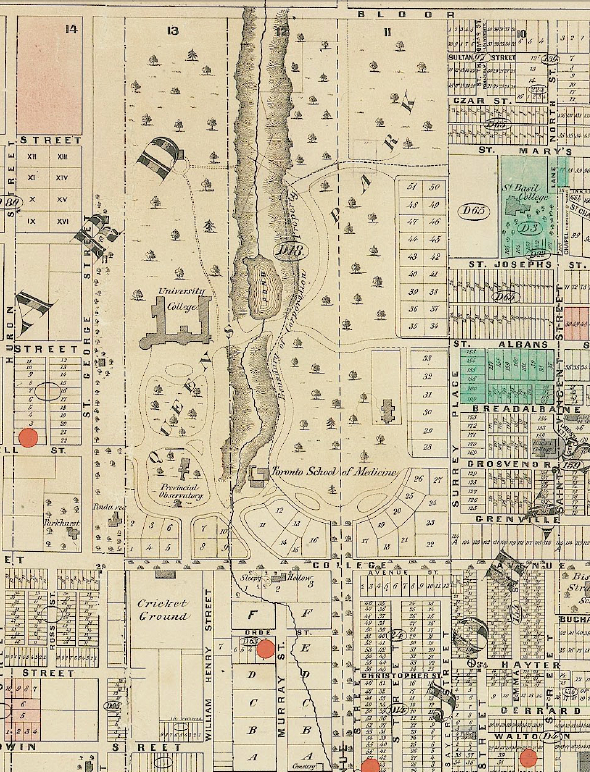 Section from Wadsworth and Unwin's Map of the City of Toronto, 1872, showing Taddle Creek and McCaul's Pond passing Queen's Park Circle and heading south to University.

Taddle Creek then flowed southeast and crossed Bathurst roughly at the CPR tracks, to use today's landmarks, and continued in an almost straight southeasterly direction to just north of Bloor between Bedford and Avenue Road.

Much of the river course through this section has been lost; there are no winding streets, sudden dips or mysterious geographical anomalies to betray the old route, but in 1928, the water dominated the southeast corner of Lowther and Huron Street, possibly due to sewer repairs.

Taddle Creek Park, at Lowther and Bedford, is on a patch of land where the creek used to flow. It also features a sculpture that uses roughly 6 kilometres of metal, the approximate length of the old river. 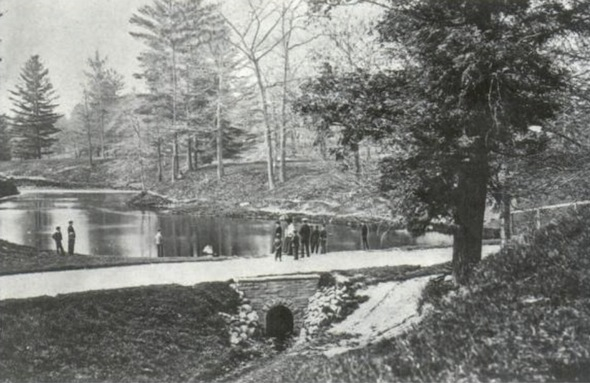 From Bloor, Taddle curved directly south and headed through the University of Toronto campus.

Philosopher's Walk, the tree-lined path that starts between the Royal Conservatory of Music and the ROM, precisely follows the path of Taddle Creek south to Hoskin Avenue, where the river continued south and formed a McCaul's pond, named for John McCaul the first president of University of Toronto.

The pond was formed by a small dam in the creek just above where Wellesley Street West peters out south of Hart House Circle; the water would have sat almost exactly on the site of the grass in the middle of the circle. 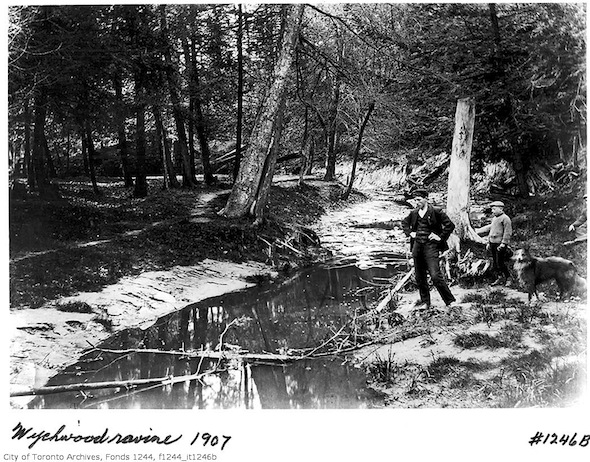 Wychwood Creek in 1907, a stream that could have fed Taddle and even Garrison Creek.

The irregular shape on the west side of Queen's Park Crescent is probably the best evidence on today's street grid of Taddle Creek's existence.

The river passed beneath University Avenue just north of Elm Street and headed southeast behind the back of the city council buildings and met Yonge between Queen and Shuter, under where the Eaton Centre now stands.

Continuing roughly eastward, Taddle Creek crossed over Queen at Mutual Street and met Moss Park Creek on the south side of the street opposite Moss Park. 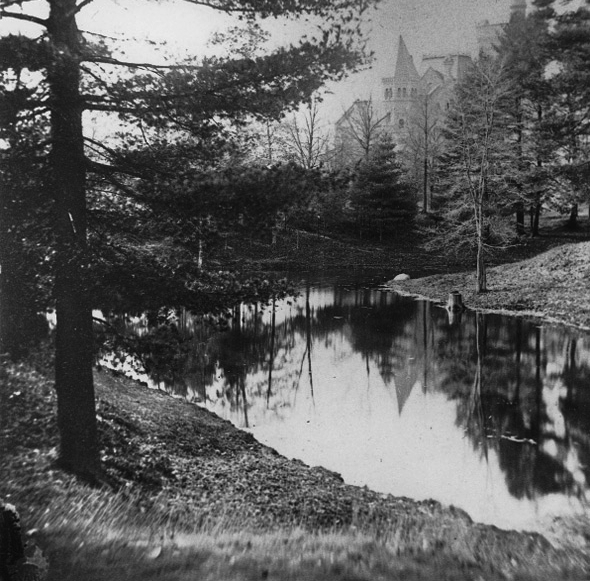 An old photo of Taddle Creek.

The only confirmed confluence on the route caused Taddle Creek to bend southeast once more through one of the oldest parts of the city where it likely played a part in earning the old town the nickname of Muddy York.

In its final stage, Taddle Creek flowed southweast passing the southwest side of Berkeley and Adelaide, the site of Alumnae Theatre, and passed over Parliament at King where it met Enoch Turner's brewery.

At Front Street the river curved back on itself and flowed southwest for the first distance before dropping into Lake Ontario at the soccer field between Berkeley and Parliament where the shoreline used to be located before infilling moved it further south. 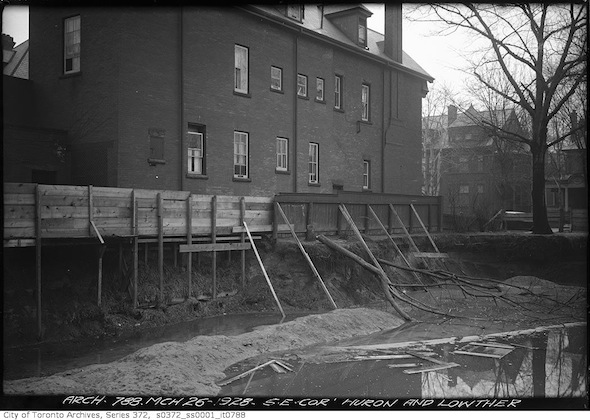 Several cairns, including a bronze marker at Adelaide and Parliament, line the old path of Taddle Creek keeping alive the ever-fading memory of the river.

The evidence of its existence might be less obvious than that of Garrison Creek but Taddle and many other creeks and minor waterways like it have played an important role shaping today's city.