A brief history of the Margaret Eaton school in Toronto

Looking like a relic from another land, the Margaret Eaton School of Literature and Expression with its Greek temple design, genie motif and cryptic motto never seemed quite at home sandwiched between two anonymous homes on North Street, just south of Bloor.

Designed by W. R. Mead in a Greek revival style, the school was financed by and named for Margaret Eaton, wife of Toronto retail magnate Timothy Eaton, as a home for the teachings of Emma Scott Raff, a pioneering University of Toronto women's teacher specializing in physical education and dramatic arts. 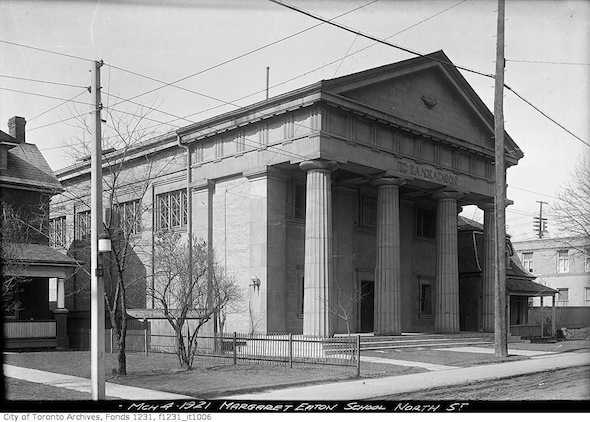 Completed in 1906, the school taught literature, physical culture and rhetoric from the outset, quickly establishing itself as a landmark in the city. Its most significant contributions, however, were to Canada's performing arts scene.

Around the turn of the century female actors were often marginalised in the male-dominated theatre world. Scott Raff was among the first in Canada to produce new plays by Irish writers W. B. Yeats, J. M. Synge and Augusta, Lady Gregory to rapt audiences. The school also hosted guest lectures by big names such as Albert Grey, the 4th Earl Grey, Governor of Canada and namesake of the Grey Cup, Sir Johnston Forbes-Robertson, English actor and theatre manager, and Sir Frank Benson, a producer famous in the era for his Shakespeare plays.

While the curriculum was mostly limited to foreign authors, a few homegrown titles were taught to students. The school's final performance was When Half Gods Go by Canadian poet Norah Holland. Dora Mavor Moore, another trailblazer for Canadian theatre later in her life, was among the school's successful alumnae and the Dora Mavor Moore Awards, or Doras, are presented each year by the Toronto Alliance for the Performing Arts to the outstanding members of the local theatre scene.

Despite occasional difficulties of keeping the school in the black, Scott Raff guided the school until its closure and merger with Victoria College at University of Toronto in 1926. At the time of her death in 1940 Scott Raff's name was indelibly linked with the Little Theatre movement in Canada. 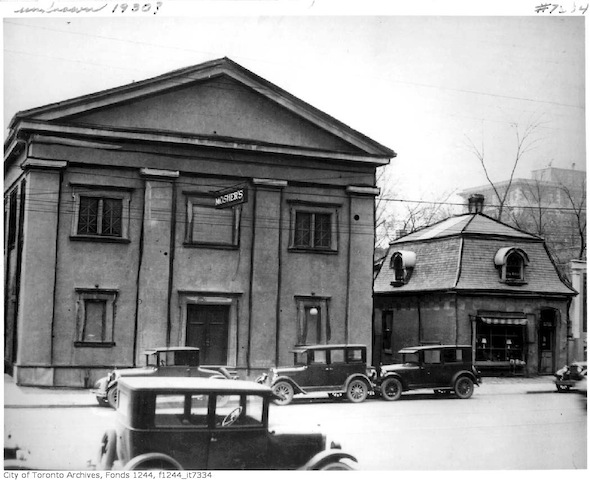 The building, however, didn't fare as well. It had its portico removed when North Street, now Bay, was widened. Mosher's, a dance studio run by the brilliantly named Hiram and Pansy Mosher, owned the property during its final years before demolition as part of the reconfiguration of Bay Street. If the building were still standing today it would be opposite the Manulife Centre on the site of the brown brick high-rise at 1166 Bay. 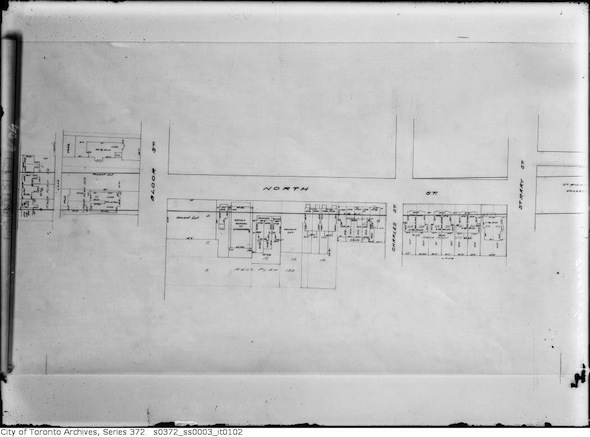 Thanks to Canadian Shakespeares and Heritage Toronto.

Photos from the City of Toronto Archives