The future of bus service on Finch Avenue West

A TTC report on how to improve bus service on Finch Avenue West will be brought to the table at the next Commission meeting on May 11th. Of the numerous options discussed, the most likely to see implementation is the addition of articulated 18 metre buses along the busy route. These are six metres longer than the standard TTC bus and would reduce crowding by a claimed 50%. Their usage would also mean that that City and Commission would be able to avoid the more expensive infrastructure improvements below.

Of these, the extension of the York University BRT along the Finch Hydro corridor is probably the most often discussed, but a paper attached to the report argues that because "the hydro route does not penetrate major transit markets on Finch Avenue itself, and would generally entail considerably longer walking distances," it's not necessarily the most desirable option. Also interesting is the idea of installing "exclusive bus lanes in the centre of Finch Avenue for bus rapid transit (BRT), basically in the alignment of the Finch LRT proposed in Transit City," which might leave the door open for non-bus transit should a future mayor be more enthusiastic about LRT. 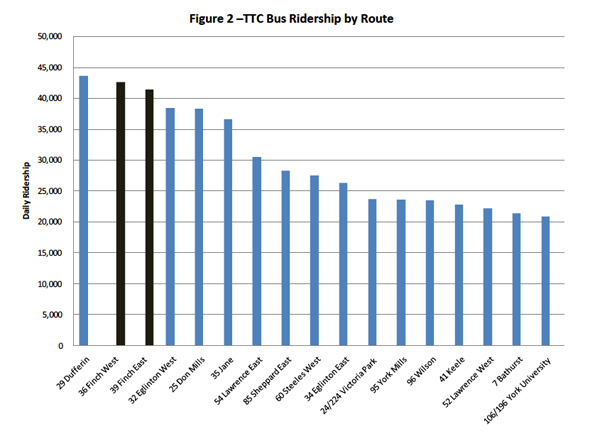 The whole report is actually rather fascinating, but it's important to remember that these are TTC proposals. Although Rob Ford has said that the City will work to improve service on Finch, some of the suggestions below will almost certainly be struck down on account of costs. Pasted below are some of the highlights. For a look at the full report, check out the PDF here.