It seems that a bizarre incident just got a little weirder earlier today when TTC Union president Bob Kinnear issued a press release pointing the finger at riders for not waking the TTC employee. Apparently, Kinnear feels there was reason to believe the employee might have been ill (not sleeping) and that riders should not have taken a photo or laughed at the situation but instead knocked on the glass to see if "he was unconscious as a result of some medical problem."

The full text of the press release is pasted below.

TORONTO, Jan. 22 /CNW/ - The following statement is issued by Bob Kinnear, President of ATU Local 113, which represents Operating and Maintenance employees of the Toronto Transit Commission:

There have been many media enquires about a picture taken at 10:00 p.m. on January 9 of a TTC Collector described as "sleeping" in the booth. The TTC is conducting an inquiry on this and until this is completed the union will have no comment on the matter except this:

Whatever the outcome of the enquiry, it is very discouraging that the picture taker and, apparently, other customers, made no attempt to determine if there was anything wrong with this TTC employee. A simple knock on the glass might have determined if the Collector was, in fact, asleep, or whether he was unconscious as a result of some medical problem. The reports that passengers were laughing at him as they passed by the booth makes this even more disturbing.

The union will comment further at an appropriate time. 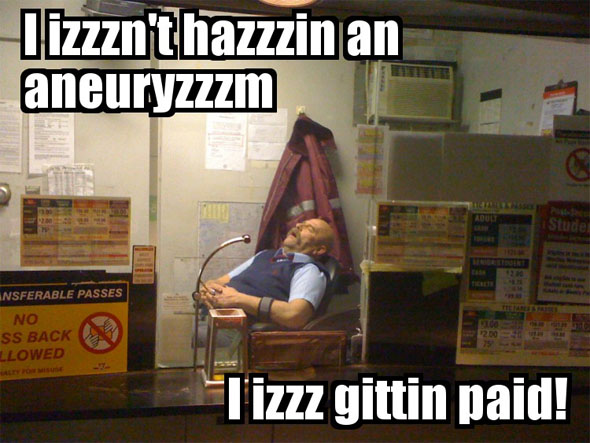