Photo: "Snowflakes in the Sky" by PDPhotography, member of the blogTO Flickr pool.

The recession is apparently having a significant, negative effect on holiday shopping habits. With consumers' growing concerns about being able to continue to pay their mortgages and put food on the table, retailers are seeing less purchasing despite huge pre-Christmas discounts and sales. Some might argue that this is a positive effect, however, because curbed spending does wonders for high-interest personal debt, which is at insane levels already.

The search for Mariam Makhniashvili went international this weekend, when a segment of popular US television show "America's Most Wanted" aired information about her disappearance. So far, no new clues have come in as a result. Unconfirmed sightings in Alberta seem to be ongoing, however.

H1N1 vaccination clinics in Toronto have shut down for the year. The vaccination takes 10 days to be effective, so if you're hoping to reduce your risk of falling ill to the swine flu over the holidays (think Uncle Bob's sneeze-covered hugs, the wheezing woman sitting next to you on the plane, etc.) it's probably too late. Getting the shot from your doctor (if you have one) is still possible. 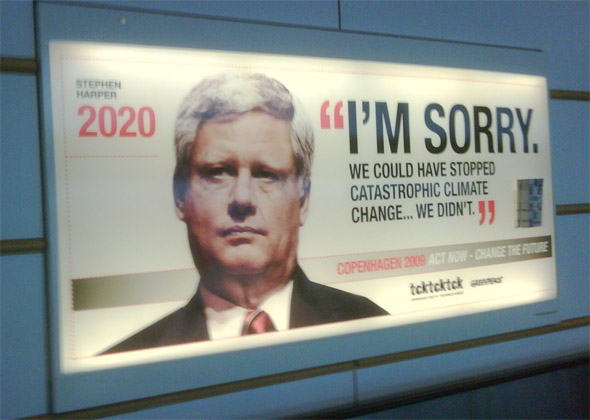 The Harper government is taking a lot of criticism at the Copenhagen climate talks, where provincial delegates from Quebec and Ontario are dismayed by the feds' low targets for greenhouse gas emissions reduction. Toronto mayor David Miller's first roving report via Twitter showed this very public shot at Harper as well (see above photo) and one Canadian youth delegation had this to say about our dirty tar sands catastrophe:

Three men are being sought after a woman reported being the victim a horrific sexual assault in south Etobicoke. On her way home from a bar, the group of men are alleged to have grabbed her and attacked her for about an hour (the media previously incorrectly stated that the terrifying ordeal was 5h in duration) in the secluded and dark parking lot of Sir Adam Beck Junior School. It's cases like these when tar and feathering the convicted to death almost seems like a reasonable means of punishment.

Don Cherry is getting a finger wag from Toronto doctor Charles Tator, for his promoting of the "rock 'em, sock 'em" style of hockey that can result in serious injuries to hockey players at all levels of play. NHL player Keith Primeau comes to Cherry's defence, but has an uphill battle in convincing us otherwise, since he himself has had four concussions (and likely had a role in causing them to others).

Today is the last day to send us your nominations for our "Best of Toronto 2009" in several categories including cheap eats, news stories, bars, and many more!