The UnderTOw: The Victory Soya Mills

The other week I spent a Saturday afternoon on the Islands watching Dragon Boat races, which was about as good an indication as any that summer had finally arrived. On the ferry ride back, I had a long look at the different areas and neighbourhoods that make up the waterfront. While looking at the central waterfront isn't exactly awe-inspiring because of the concrete curtain of condos, looking east and west still provides some interesting views.

My favourite is probably the eastern view over to the Portlands. With a few notable exceptions (like Cherry Beach), the Portlands is not the most interesting place to explore up close. In a weird way, though, it's one of the most interesting places in the city to observe from a distance. The smokestacks of three now-defunct industrial buildings compete with the banks and the CN Tower for the tallest structures in the city, and the huge barges that occasionally drift over to the Redpath Sugar Factory hail back to the time when the waterfront was heavily industrialized. Among those structures are the Victory Soya Mills. 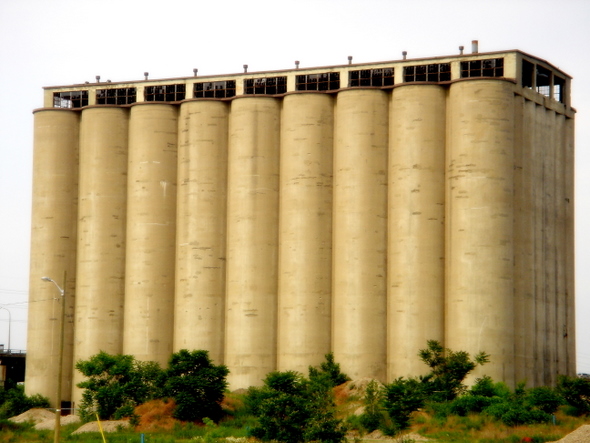 The Victory Soya Mills were opened in 1946 by E.P. Taylor, who had been looking to help end the shortage of fats and oils resulting from wartime food and petroleum rationing. The location of the building was ideal given that it could receive shipments by water, train, and roads. The construction of these silos almost singlehandedly revitalized the industry in the country, which became more vital as the healthiness of vegetable fats rose in the public consciousness.

As rail and water became less efficient means of transportation, the Victory Soya Mills succumbed to the same fate that befell similar structures on the waterfront: it became irrelevant and abandoned. Finally closed in 1991, it had been the largest "crusher" in the country, with roughly 540,000 tonnes of soybeans processed annually. The building may find new life in the re-design of the Lower Donlands by Michael Van Valkenburgh and Associates, possibly as a water filtration plant or a brewery.

On a walk along the waterfront several years ago, I approached a similar structure in the Canada Malting Company. I had been touring a guest around the city, and was showing them the building as an example of ugly architecture along the waterfront. (I think I may have even screamed "Damn you, Canada Malting Company!" at the time...). In the last few years I've gained an appreciation for these abandoned industrial structures, and now enjoy imagining them in their time, whether from up close, or far away.