The Cavalcade Must Go On...

At the risk of over-posting on the topic, I've got to tell you about tonight's Cavalcade of Lights on Corso Italia... as it almost didn't happen.

With 5 minutes to go until the unveiling of the lights at St Nicholas Church, I am hurrying up the street with my camera. I pass a Hydro crew putting up lights and think to myself, "Awesome, more decorations." Little did I realize that in order to do the work they were doing, they had actually disconnected power to both sides of St. Clair West in Corso Italia. Stellar timing.

I arrive at the scene of the 'party' and run into friends. First thing they point out are all the dark storefronts and people scurrying to figure out what to do with no mics, no amps, and certainly no lights. Well, the streetlamps are on, so that's... helpful.

The president of the BIA hops on stage to shout to a crowd of a couple hundred (no easy task with traffic nearby) that Hydro crews have assured electricity will be back "momentarily -- whatever that means!"

Still, the show must go on, right? The choir from a nearby high school take to the stage and try their best to project their voices. People sing along... and it's nice... though a little drowned out.

Mo Johnston of the Toronto Football Club steps up on stage afterwards to huge cheers and he barks out his hellos sans-mic. Then everyone is invited into the church for hot chocolate and panettone.

Somehow across the crowd and catch the eyes of my mother, who had been helping with that aspect of the evening. She has a look of slight panic -- enough that I rush over and she directs me to "help". 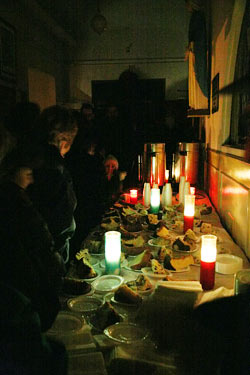 The one good thing about a power-outtage and a church is that you know there are candles on hand. So, with the help of lots of votive candles the snack table is mildly lit. It's a mix of festive and haunting... I kinda like it.

I hear some confusion by the hot chocolate and go over to find people with cups of hot water they can barely see. Helping light things with a cell phone we see that next to the brew pot, a huge jar of Carnation/Nestle creamy hot choc mix awaits. It hasn't been mixed.

Camera gets put down, sleeves are rolled up, and next thing I know, I'm brewing hot chocolate in the dark for the next 20 minutes.

Suddenly the lights go on... and the crowd goes wild.

The Giuseppe Verdi Choir (who are amazing and totally didn't need microphones) take to the stage and now everyone is singing in the street.

I give someone by big wooden mixing spoon and run over to get a couple pictures before returning to my new brew duties.

When things start wrapping up, Hydro crews make peace by handing out extra LED lights to all of us and the night is a success.

Tomorrow I'll worry about explaining all the chocolate to the dry cleaner.