Though it has earned a reputation as a great location for filming comic book adaptations, Toronto's relationship with sequential art extends beyond its facades.

Joe Shuster, co-creator of Superman, was born and raised in Toronto: his first submissions to DC Comics were drawn on wallpaper he'd scavenged from outside of a Garment District storefront. Toronto-claiming artists like Ty Templeton, Francis Manapul, and the late Darwyn Cooke were likewise instrumental in the development of superheroes into billion-dollar multimedia properties.

Most notoriously, Brian Lee O'Malley's Scott Pilgrim series of graphic novels takes place in the Toronto of the mid-to-late 2000s. It was adapted into a movie by Edgar Wright in 2010, starring Brampton-born Michael Cera as the titular slacker.

Toronto's significance to the medium is more than its mainstream contributions. In the late 80s and early 90s, the trio of Chester Brown, Joe Matt, and Seth achieved international notoriety for their ostensibly autobiographical comics, which frequently featured themselves living, working, and having conversations in various locations around the city.

Contemporarily, Toronto is home to hundreds of cartoonists of multitudinal ages, ethnicities, and gender identities; it is also the host city of the Toronto Comic Arts Festival, one of the largest and most prestigious small-press-focused comic conventions in the world.

The city's strong indie comics culture has been bolstered and cultivated by the existence of The Beguiling Books and Art, and the work its knowledgeable staff do under its current proprietor, 49-year-old Peter Birkemoe. 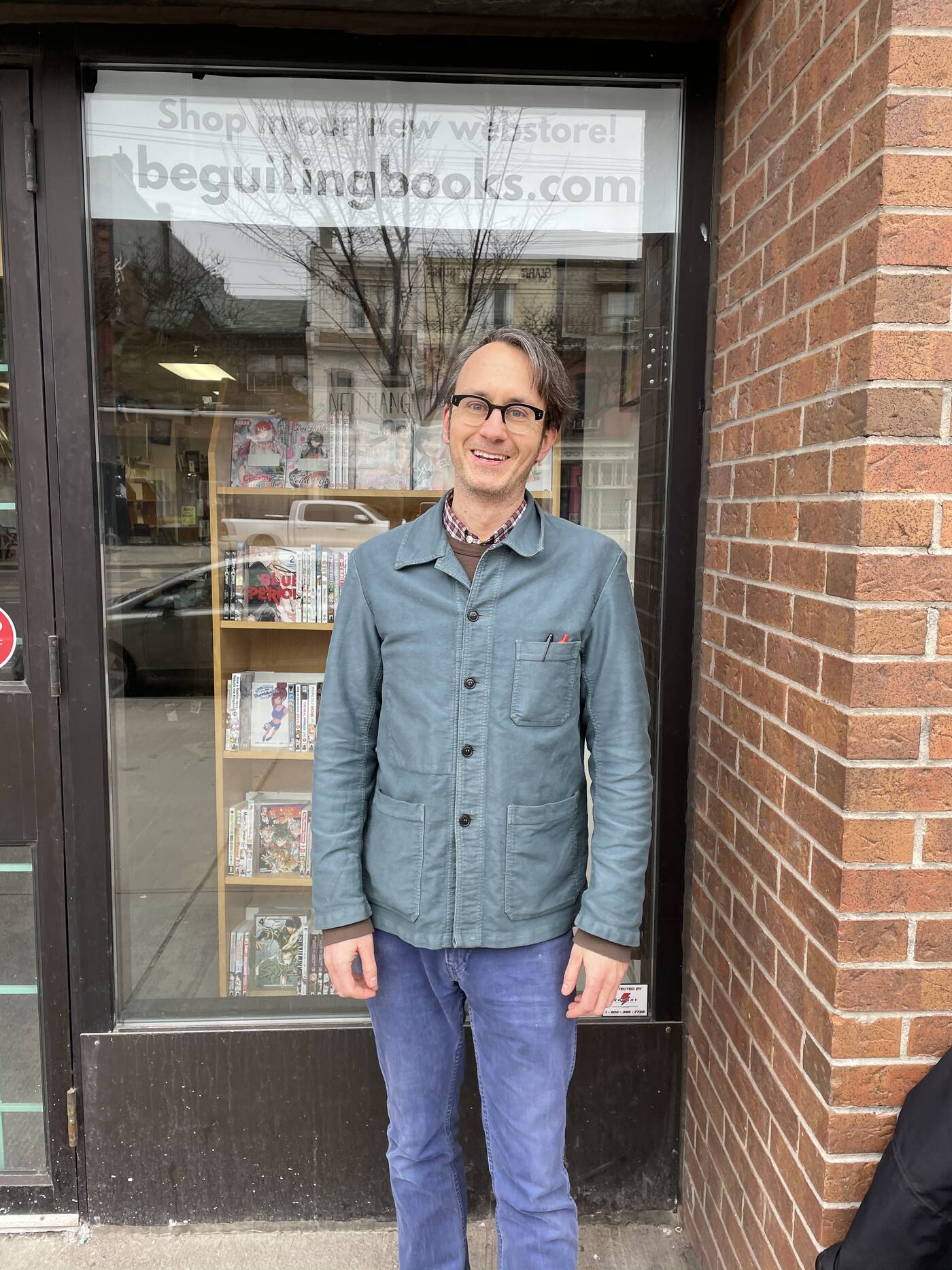 The Beguiling opened in 1987 at 185 Harbord Street, in the ground floor of a since-demolished storefront next to the venerable Pizza Gigi.

Said Birkemoe of the original location: "I started shopping at the Harbord Street location probably a few months after it opened. The Beguiling was very much an aspirational store. They carried a lot of magazines and comics that challenged my ideas of comics and made me want to know more about them."

The Beguiling remained on Harbord until 1992, when space considerations inspired a move to 601 Markham Street, then the middle of the small, bohemian Mirvish Village neighbourhood.

It was there that Birkemoe became enough of a regular to work the occasional fill-in shift. When Solomos and Scoffield left to start families and pursue careers in art and film, Birkemoe assumed ownership of the store alongside a partner, Shane Chung.

"I was recently graduated and not yet locked into a career. I didn't want the place I got my comics to change. I didn't think it would be a twenty-plus year career, but that's what it's become," he said. 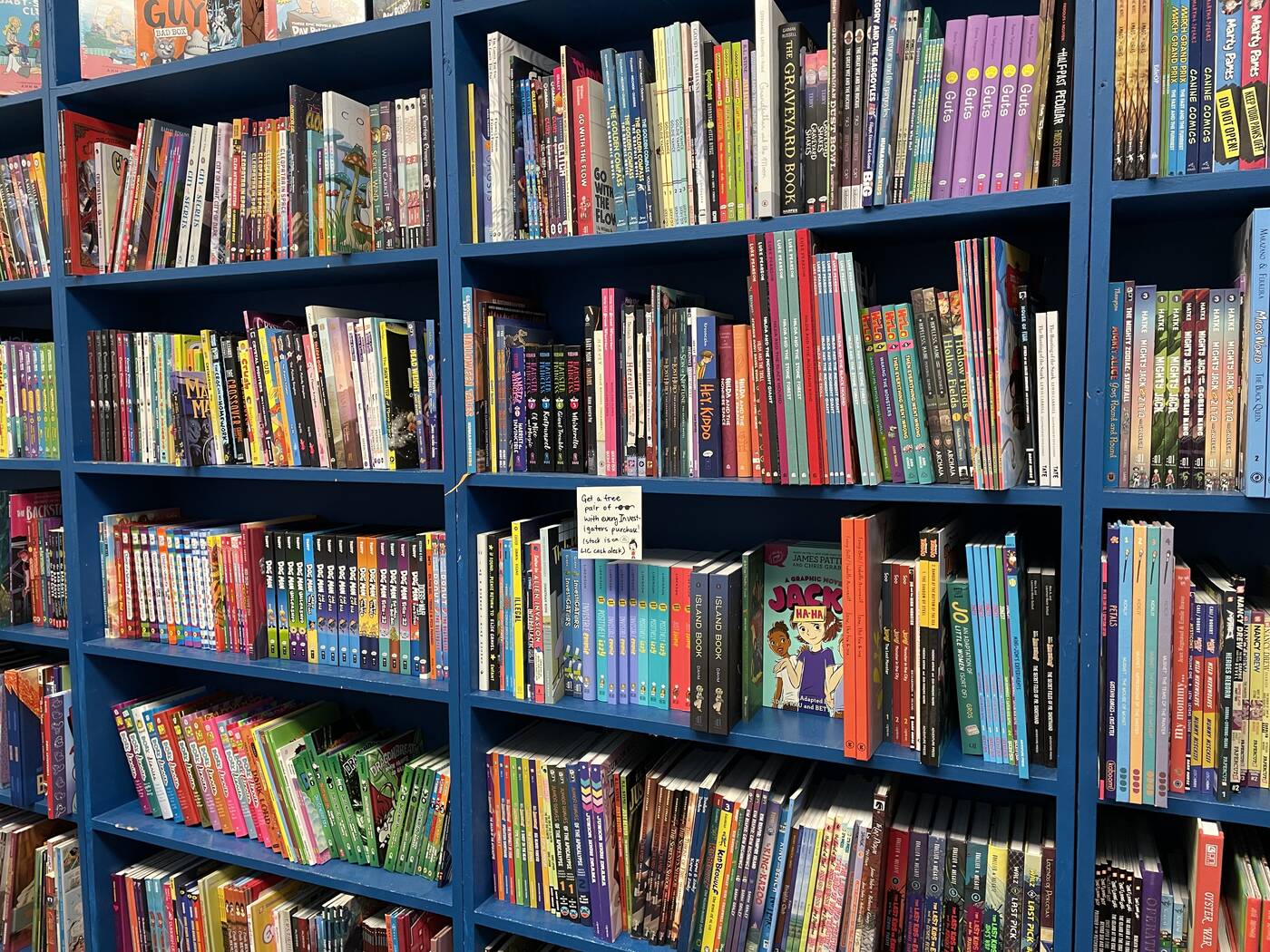 Prior to his tenure at The Beguiling, Birkemoe spent time working at Harry Kremer's Now and Then Books in Kitchener.

Founded in 1971, it was one of the oldest comic book stores in North America, drawing direct inspiration from Canada's first comic book store, "Captain" George Henderson's Memory Lane, which opened in Mirvish Village in 1967.

Now and Then had employed Dave Sim, the prolific, infamous creator of Cerebus, in his teenage years. Said Birkemoe of his time there: "One of the vacations I worked at Now and Then coincided with the 15th anniversary signing of Cerebus. It was a perfect time to jump into non-superhero comics."

A trip to Amsterdam's Lambiek, Europe's first comic shop, early in his career informed Birkemoe's philosophy towards running his store.

"My visit there urged me to push the depth and breadth of the selection that we got when I inherited The Beguiling much further, to have it be as all-encompassing as it can be. What we've accomplished now feels very similar to Lambiek," he said.

The Beguiling operated out of the labyrinthine two-story Markham Street location until 2017, when the closure of Honest Ed's portended the razing of Mirvish Village.

In its nearly twenty-five years on Markham, the store hosted an international array of comics' renowned and up-and-coming creators for hundreds of signings, readings, performances, and other events.

Fortunately, unlike some of the other businesses in Mirvish Village, Birkemoe was able to find a place to move, mere blocks south: 319 College Street West.

"We found what felt like a good location, but obviously it turned out to actually be a good location. Within a year of opening, we had the possibility of expanding. Then, a month after expanding, of expanding again. Running a comic shop of the type that we do, which is deeply and broadly stocked, requires significant backroom space." 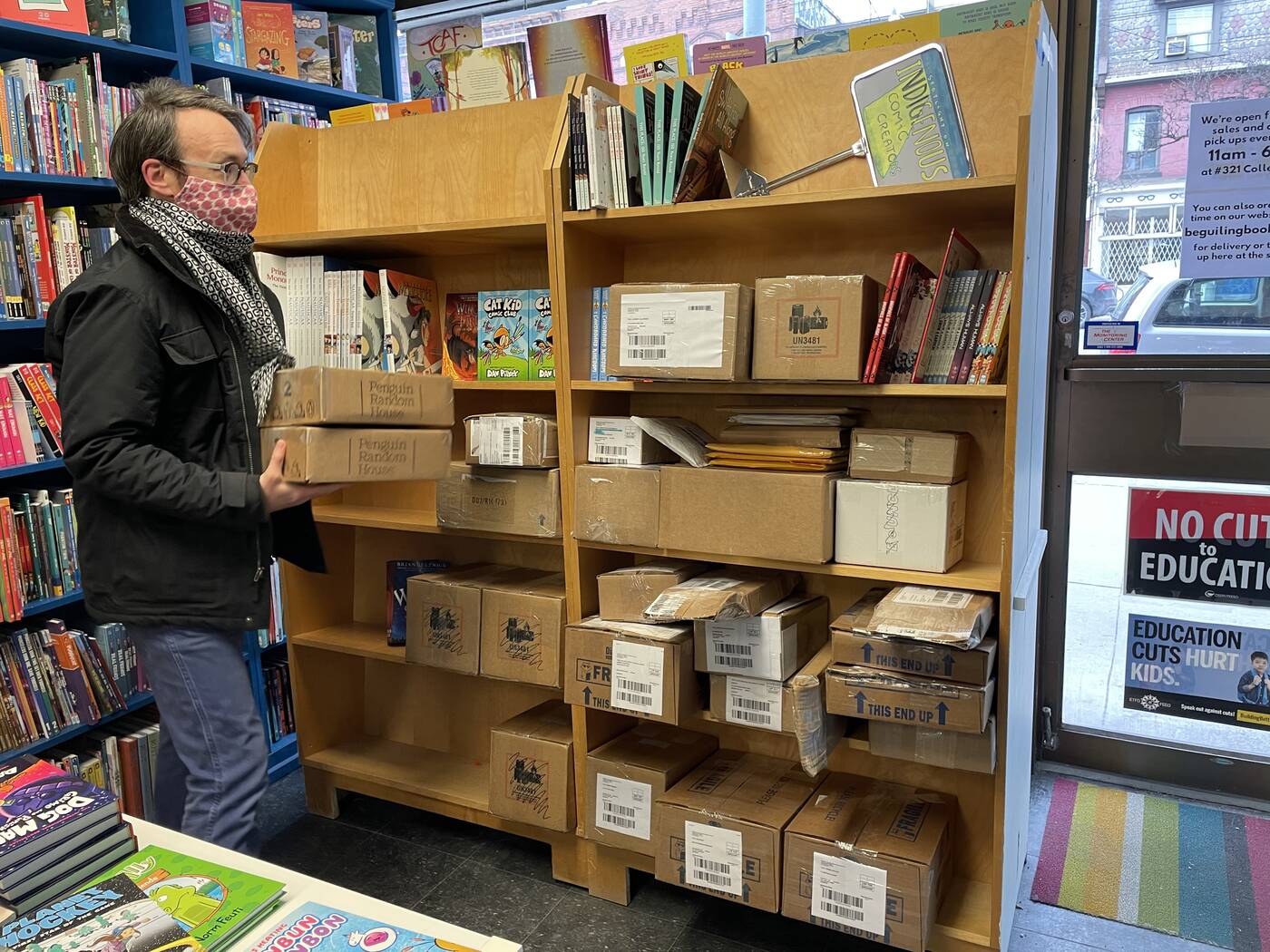 Relocating at the beginning of 2017 and taking over the storefronts formerly occupied by an electric scooter shop and, soon after, a new-age spiritual organization (Birkemoe: "You can just call it a cult"), The Beguiling was quickly able to reopen its offshoot shop, Little Island Comics.

That store is exclusively dedicated to the sale of comics and other illustrated material for children ages twelve and under. Its previous location at 742 Bathurst Street was another casualty of the redevelopment of Mirvish Village.

Said Birkemoe of the child shop's name: "When you say 'The Beguiling' over the phone, people don't always hear it right. At the old store we would have people looking for 'The Big Island'. So when we did open a children's store, calling it 'Little Island' made perfect sense to me."

"We were very fortunate. We have an incredibly loyal clientele. Also, our point of sale system allowed us to immediately launch a website with all of our product instantly available for the public to purchase.

Pivoting to online sales was not that difficult. In the early days of the Pandemic, The Online Monopoly was not shipping book product. That left an opening not just for us to service our regular clientele, but also all sorts of new clients as well." 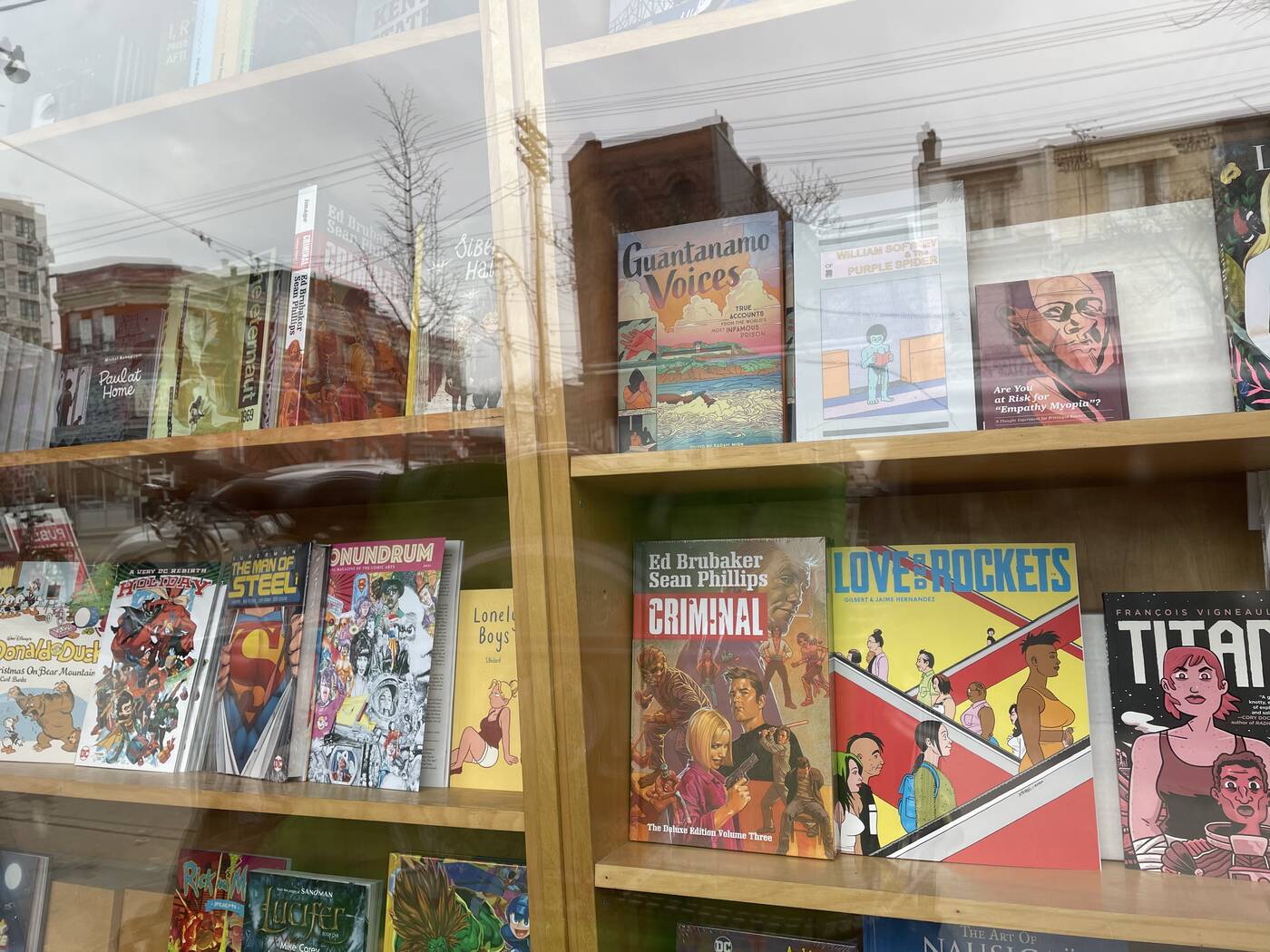 In 2003, addressing the dearth of independent-comic-focused events in Canada, Birkemoe and The Beguiling employee Christopher Butcher co-founded the Toronto Comic Arts Festival (TCAF).

"At the time, the store was doing a lot of events to promote comics, but we were reaching a ceiling of fifty to eighty people attending each one. That's really good for a store signing or small bar thing, but there was really the feeling that much more could be done.

Visiting the Small Press Expo in Bethesda, Maryland, it was like 'man. Toronto is a much nicer city. This could do really well there.' If we already wanted to promote ten authors over the spring at different events, what if we instead got forty or fifty of them in a room and got hundreds of people as opposed to dozens?"

Approximately 600 people attended. Two years later in 2005, the event was held in the Honest Ed's parking lot, with around 6000 people attending. Attendance was similar in 2007, when it was hosted at the University of Toronto's Victoria College.

In 2009, the event in partnership with the Toronto Public Library became yearly, and settled into its current home at the Toronto Reference Library. In its first year there, it drew approximately 10,500 people; as of 2019, it boasts an attendance of over 25,000. It has always been free to attend.

A bevy of diverse and eclectic creators exhibit at TCAF yearly. Hundreds of artists from everywhere in North America have exhibited and debuted books at the Festival, including Lynda Barry, Alison Bechdel, and Jillian Tamaki.

Butcher's tireless international coordination as Artistic Director of the festival similarly brought a coterie of creators from all over the world to attend, including prominent European literary cartoonists like Jason and Lewis Trondheim, as well as superstar Japanese manga artists like Inio Asano, Taiyo Matsumoto, and modern master of horror Junji Ito.

In June 2020, accounts of institutional insensitivity towards BIPOC and marginalized communities by TCAF's organizational body were brought forward via Twitter as a direct response to TCAF's Commitment to Ending Anti-Black & Anti-Indigenous Racism, published shortly after worldwide protests began in response to the murder of George Floyd.

Birkemoe had this to say regarding his decision: "Christopher was burning out. His job should not have been, and will not be going forward, done by one person. I think the board that is in place now at TCAF is doing a good job of finding the right people to handle programming and other aspects of the festival."

Like many other festivals and gatherings last year, the 2020 iteration of the Toronto Comic Arts Festival went entirely digital. Between Butcher's resignation and the ongoing pandemic, TCAF is poised to radically change in 2021 and beyond.

Regarding future plans, Birkemoe said: "This year, there will again be a digital component. That will hopefully include a commercial component, of being able to purchase the goods as opposed to just hearing about them."

"And, if we end up with some degree of vaccination and improved public health measures, we may do something outdoors. People have accepted that some things are going to take a year or two off."

"TCAF was originally not every year, mostly because of the incredible work that went into it. Being able to take a longer breather between festivals is nice." 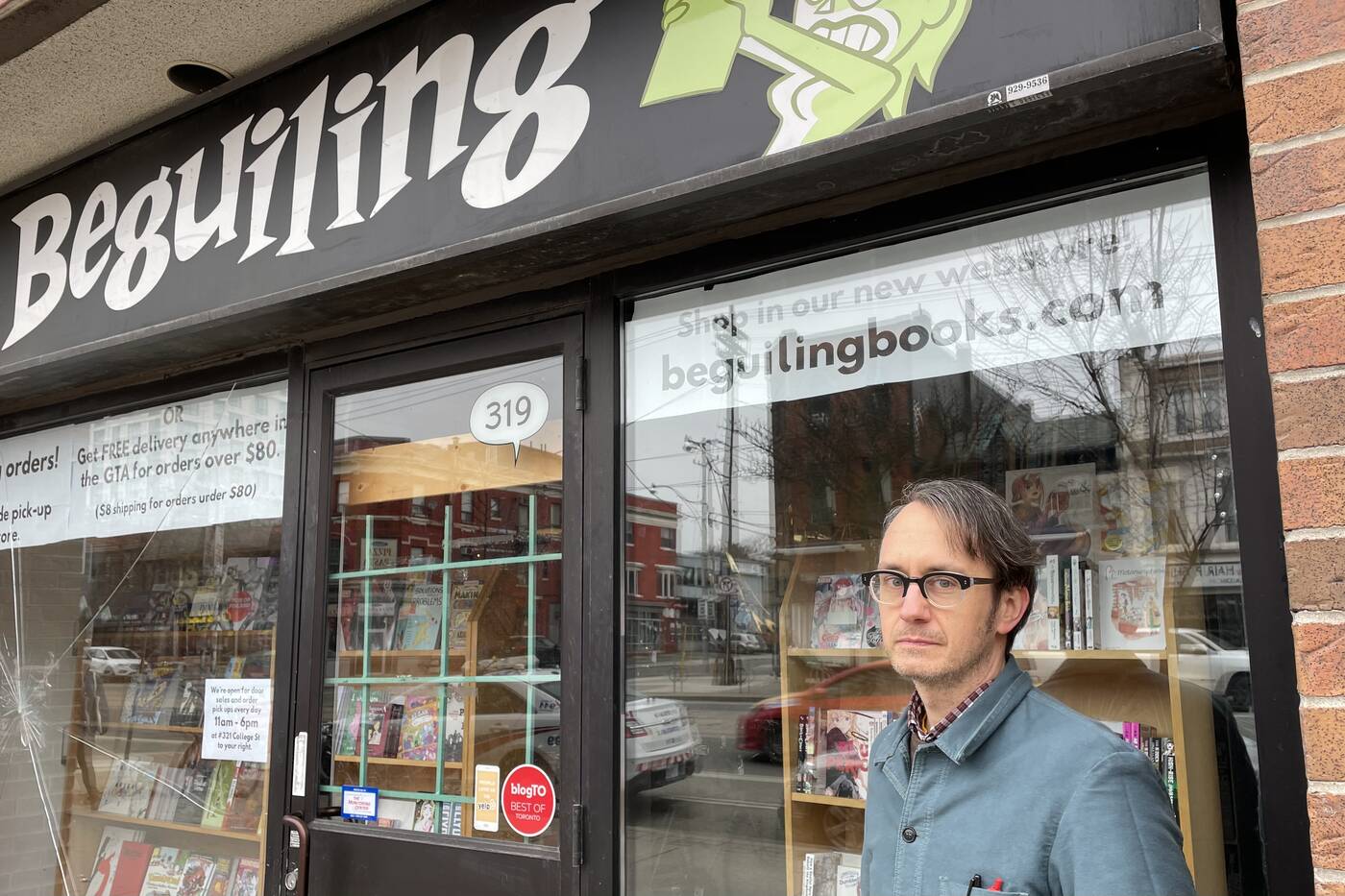 Birkemoe has lived in Toronto for almost his entire life, growing up in Etobicoke and most recently residing near Dovercourt Park.

"I feel enormously lucky to be in Toronto. I feel like I only take advantage of the tiniest slice of the cultural amenities that the city offers."

"The sheer number of things that one can do in this city makes me feel very lucky to be here. The cultural diversity makes me feel like all the world is here. I don't think there's any place in the world I've traveled that has made me feel that Toronto is lacking."

When asked about establishments he frequented, he offered: "Pandemic aside, having Soundscapes on my bike ride home is delightful. The Monkey's Paw, too, for a unique retail experience."

"The staff of The Beguiling and I typically have a Christmas Party, but since we weren't able to last year, we all just sort of separately had lunch at Veggie D'Light."

"After fifteen-plus years in Mirvish Village, I had kind of exhausted all of the food options within walking radius. Being provided with a whole new set around our new location is fantastic."

Toronto's independent comics scene would not be as strong and as internationally renowned without The Beguiling and the Toronto Comic Arts Festival.

Symbiotically, it is the Toronto comic scene's support, including strong relationships with local creators and publishers like Koyama Press, that allows The Beguiling to grow even during a pandemic.

In 2020, Birkemoe published his first book under the BDP Press banner, Natsuko Ishitsuyo's Magician A. Having signed a ten-year lease for the store's current location, Birkemoe hopes to continue to purvey all manner of illustrated works for years to come.

"A comics community in a city will often end up producing and necessitating a comic shop, but the existence of a comic shop also fosters a community's existence. It's this ecosystem of people being enthusiastic about reading comics then producing comics themselves; there must be places where those comics can be bought and shared." 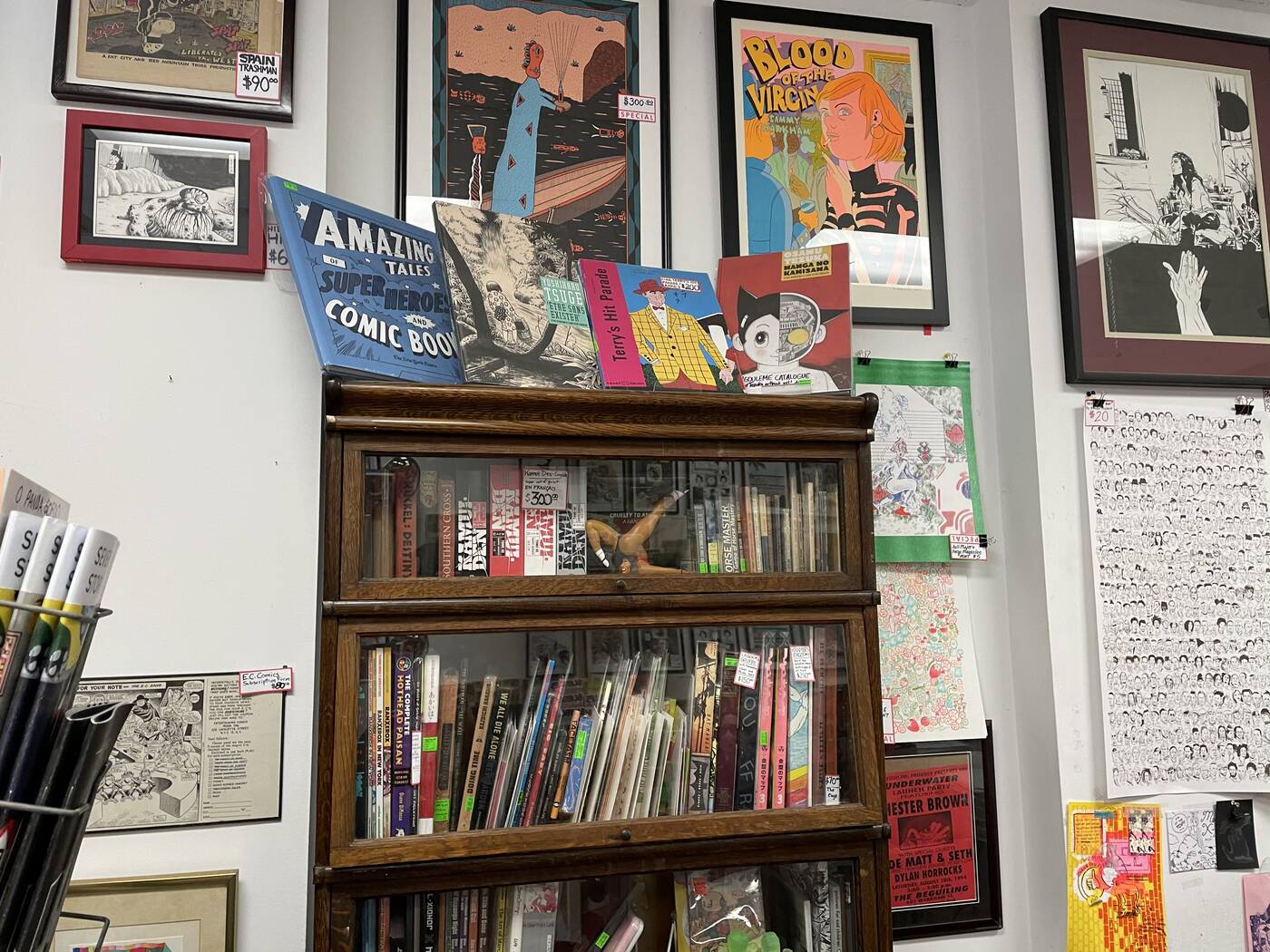