There are now trading cards for Toronto's most infamous anti-heroes

Toronto loves a good anti-hero, and our relationships with the people we simultaneously vilify and exhalt as a populace are complicated.

Do we hate them? Love them? Love to hate them? Hate to love them? In some cases, it might be all of the above. In all cases, these characters are worthy of commemoration, even if only for bringing Toronto together in morbid fascination.

This is exactly what Cabibble Cards CEO Tim Matheson has done with his company's new "Infamous6ix commemorative trading card set."

Drawn by Armando Abeleda, coloured by Rodney Velchez and written by Lea Lawrynowicz, these "beautifully crafted commemorative cards" are currenly being sold online for $6 a pack (plus shipping.)

Each pack contains seven cards, but only three of the subjects have yet to be revealed publicly: Chair Girl, the Cherry Beach Chainsaw Bros and Toronto's own IKEA Monkey. 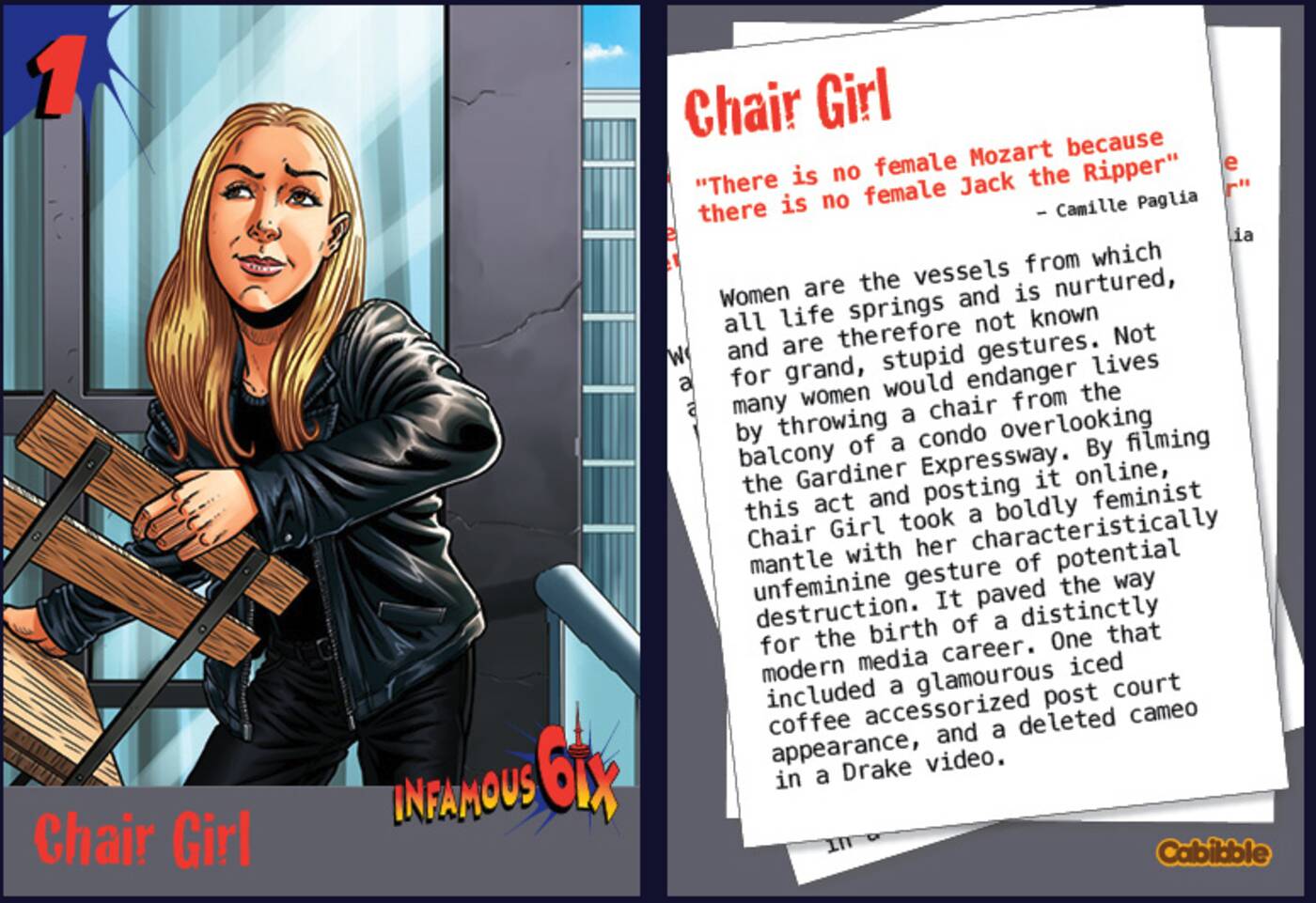 "Every time something weird or unusual happens in Toronto my brain races with the notion that something must be done to acknowledge these events and the people behind them," said Matheson to blogTO.

"When poop guy happened, I was trying to convince an art gallery to have an exhibit with art and installations devoted to celebrating these moments. It was a tough sell and the gallery passed."

Then, this summer, two bloodied men stormed Cherry Beach with chainsaws in an apparent attempt to scare some anti-maskers who'd attacked them at a rave. They became instant viral sensations.

"When chainsaw guys stormed Cherry Beach, it all came together very clearly in my mind, like when you finally see one of those decoded 3D images from the 90s," said Matheson.

"So it was chainsaw guys who were the spark that ignited Infamous6ix."

The creator says that more characters from this set will be exposed in the coming days as part of a reveal campaign (one that apparently includes leaving individual cards around the TTC system, like Easter eggs for people to find and share photos of.)

"The Infamous6ix commemorative trading card set acknowledges the efforts and accomplishments of those less celebrated anti-heroes synonymous with Toronto," reads a description on the project's website.

"Through the magic of trading cards, we have brought to life these treasured Toronto moments. It is with great exaltation that we present the Infamous6ix commemorative trading card set; art and prose dedicated to the unsung heroes of this fair city."

Card number one features a brief moment in the life of 20-year-old Toronto woman Marcella Zoia, who (in an admittedly-short sighted move that was filmed for the internet) tossed a folding patio chair from the 43rd floor balcony of a downtown Toronto condo building, endangering the lives of all below.

Nobody was hurt during the February 2019 incident, but Zoia herself has been through hell and back dealing with the police hunt, legal case and public flogging that ensued.

Cabibble's's "Chair Girl" card encapsulates the young woman's rise to infamy brilliantly, with nods to her drawn out court case and that Drake video she was edited out of after heavy public backlash.

The Chainsaw Bros card is equally on point. 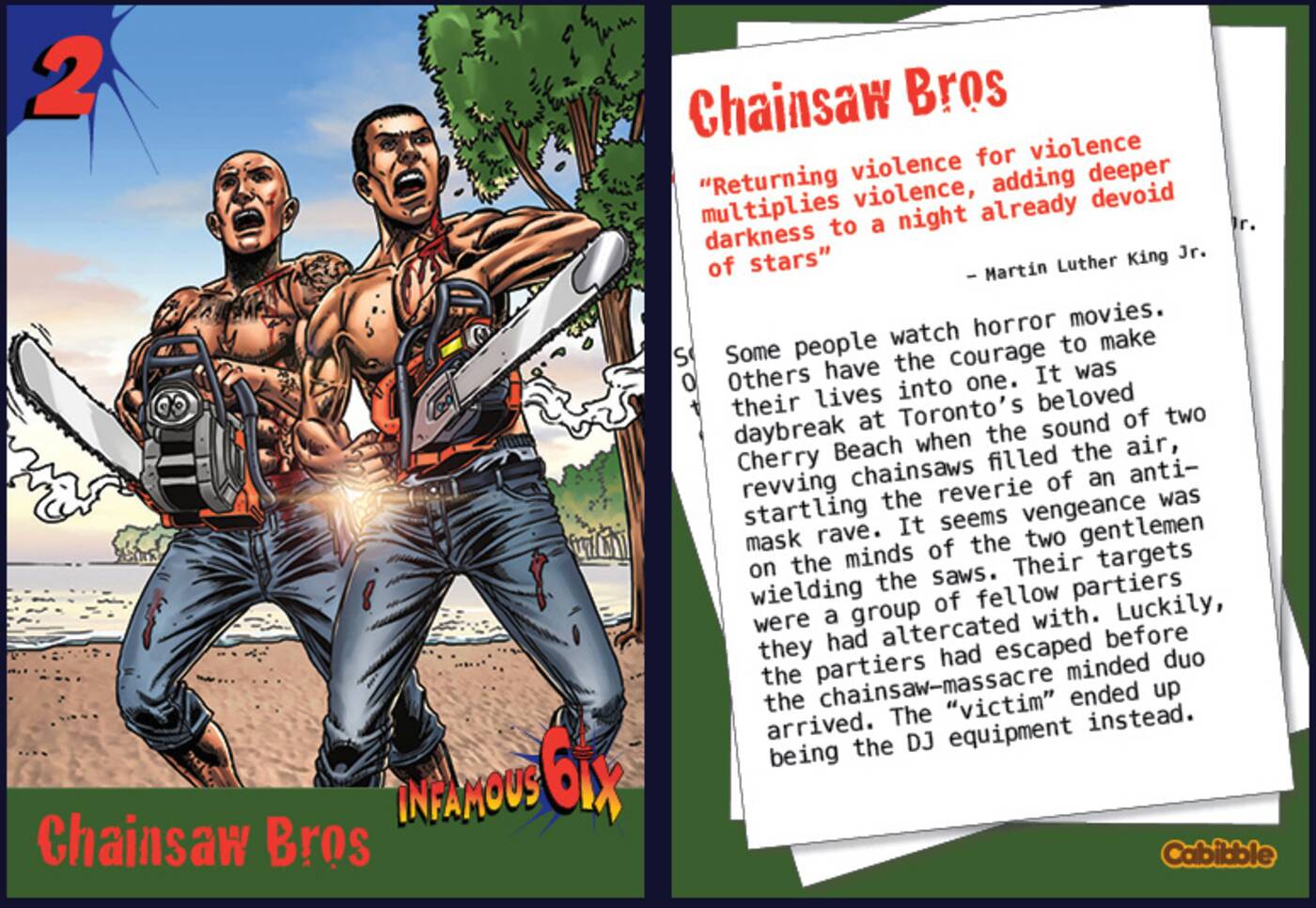 "Some people watch horror movies. Others have the courage to make their lives into one. It was daybreak at Toronto's beloved Cherry Beach when the sound of two revving chainsaws filled the air, startling the reverie of an anti-mask rave," reads the back of card number two.

"It seems vengeance was on the minds of the two gentlemen wielding the saws. Their targets were a group of fellow partiers they had altercated with. Luckily, the partiers had escaped before the chainsaw-massacre minded duo arrived. The 'victim' ended up being the DJ equipment instead."

Matheson didn't go so far as to tell us which characters were being considered for the next set, but he did say that "if the city embraces our humour enough, then series 'number two' will be eminent."

He also wanted to make clear that the team behind Infamous6ix isn't making fun of these notorious Toronto residents, but celebrating their impact on Canada's largest city.

"I would like the infamous ones covered in this set to know that we don't think they should have to pay for these ill conceived actions for the rest of their lives. That we are fanboys at heart," he said.

"And if they want to reach out to us, we would be happy to collaborate with them and have some fun, perhaps repair their public image."