Banksy fans mock Toronto exhibit with one of their own

Critics of an unauthorized, $35 million Banksy exhibit took to Sterling Road in Toronto this weekend with an exhibit of their own: An exhibit featuring at least one tribute to rapper, actor and TV host Xzibit.

The gathering, which was called "The Banksy 'Exhibit' Exhibit," saw a handful of people set up picture frames on wire fences across from the Junction Triangle building where Steve Lazarides is hosting The Art of Banksy.

It was meant to be a satirical, "renegade, guerilla style" art show poking fun at the hype surrounding an attraction that charges people $35 to see political street art.

"The art? It's the people in line across the street!" reads the event's description. "Come view them in real time. Be a part of a hilarious spectacle of irony and skeptical post-modernism."

Roughly 750 people said that they were interested in attending on Facebook, but only about a dozen appear to have shown up.

Still, their tongue-in-cheek counter-exhibit made an impact — and again, like other "pranksys" we've seen, was probably more in line with something that Bansky would approve of than what Lazarides has done.

The self-described "meta interactive art experience" by  Naomi Belcamino and Dave McKay took place on Saturday, as scheduled, between 1 and 3 p.m. across from the real Banksy show at 213 Sterling Road, despite a bit of rain.

Some attendees held out red balloons in homage to Banksy's 2002 mural Balloon Girl. 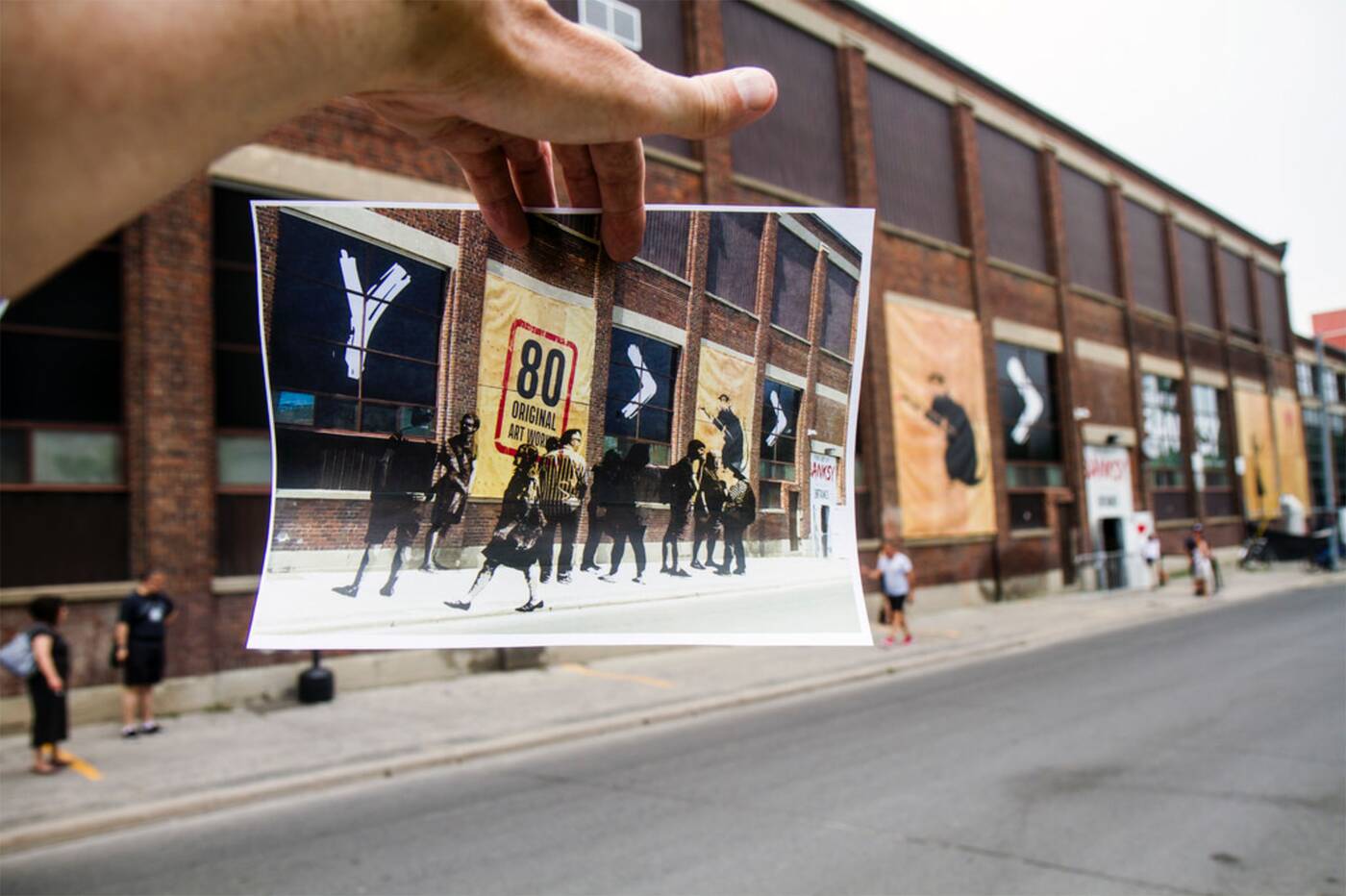 Crowds queuing for the  Banksy exhibit were part of the spectacle this past weekend. Photo by Jeremy Gilbert.

"Favourite part of the day: Everything is packed up. I'm standing on the road with a friend waiting for my cab with some things, including three massive oversized heart balloons that were imitating the real Banksy exhibit ones," wrote Belcamino on the event page late Saturday afternoon.

"An eager dad in an SUV pulls over and rolls down his window. 'How much for the balloons?!'," she continued. "'These? Nothing. Take them, they're free.' The back car door opens with three young girls in the backseat, their faces beaming as I shove massive balloons onto their laps.

"I wrote exhibit so many times that the word has now lost all meaning, much like the show curated by Steve Lazarides."

Harsh? Maybe, but hey — at least this stunt was legal.