Someone hung their own artwork inside the Banksy exhibit

Once upon a time, back in 2003, a mysterious street artist known as Banksy snuck into the prestigious Tate Britain in London to hang one of his paintings on a gallery wall.

This week, Toronto artist Tharanga Ramanayake paid tribute to the now very-famous Brit by doing the same thing at unauthorized exhibit of his work.

"Theft is bringing street art inside and then charging an admission fee," reads a placard on the wall beside Ramanayake's 5x7 print. 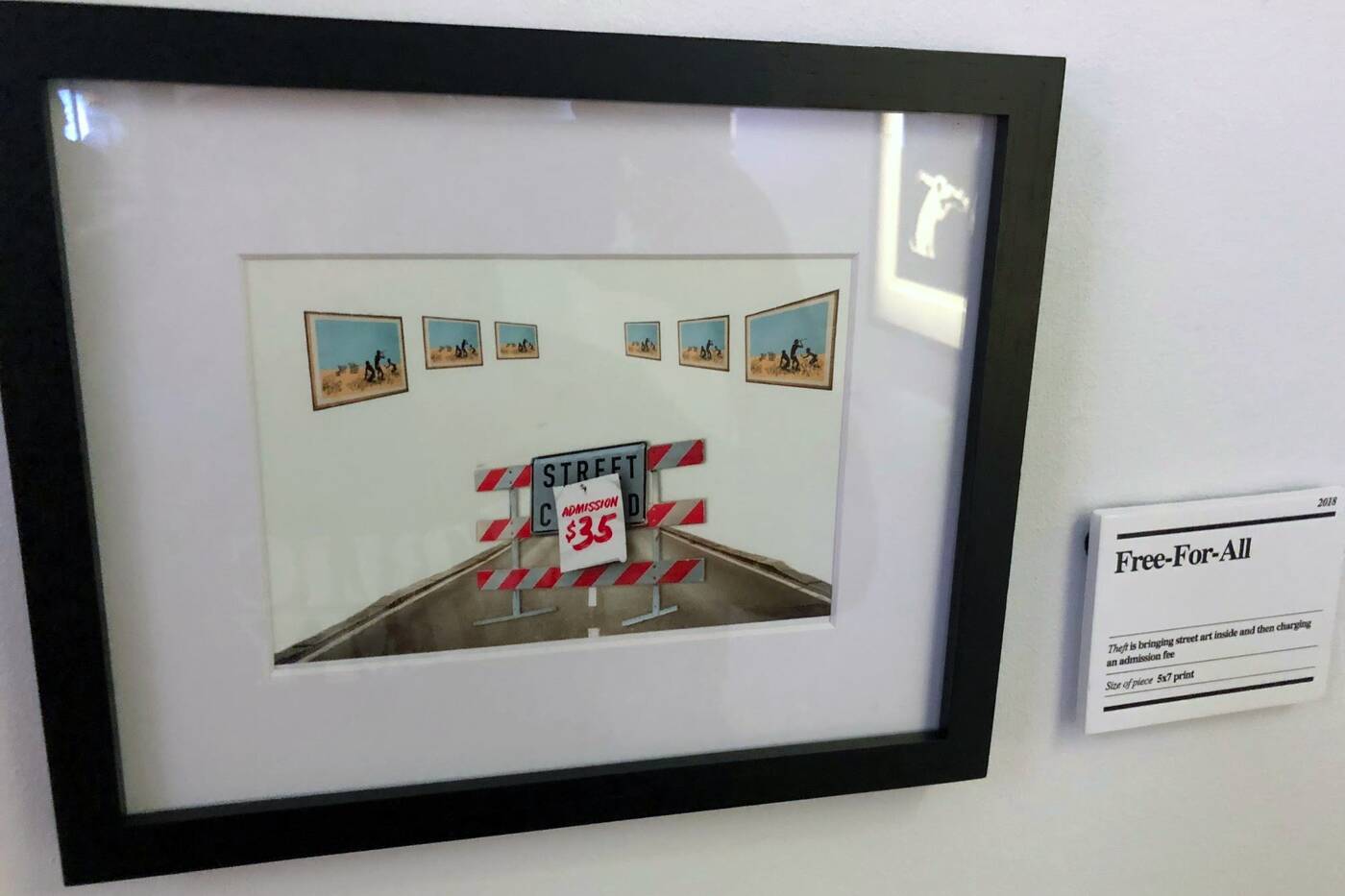 A Banksy-like piece was snuck into an exhibition of the artist's work in Toronto this week. Image via Tharanga Ramanayake.

The work, titled "FREE-FOR-ALL," shows six copies of Banksy's 2007 print 'Trolly Hunters' — a copy of which was famously stolen ahead of the show's opening at 213 Sterling Road last month

At the forefront of Ramanayake's print is a paper that reads "admission $35," posted over a "street closed" sign.

For but a few brief, fleeting minutes, you could find it hanging beside a print of 'Rage, the Flower Thrower' — arguably one of Bansky's most recognizable works. 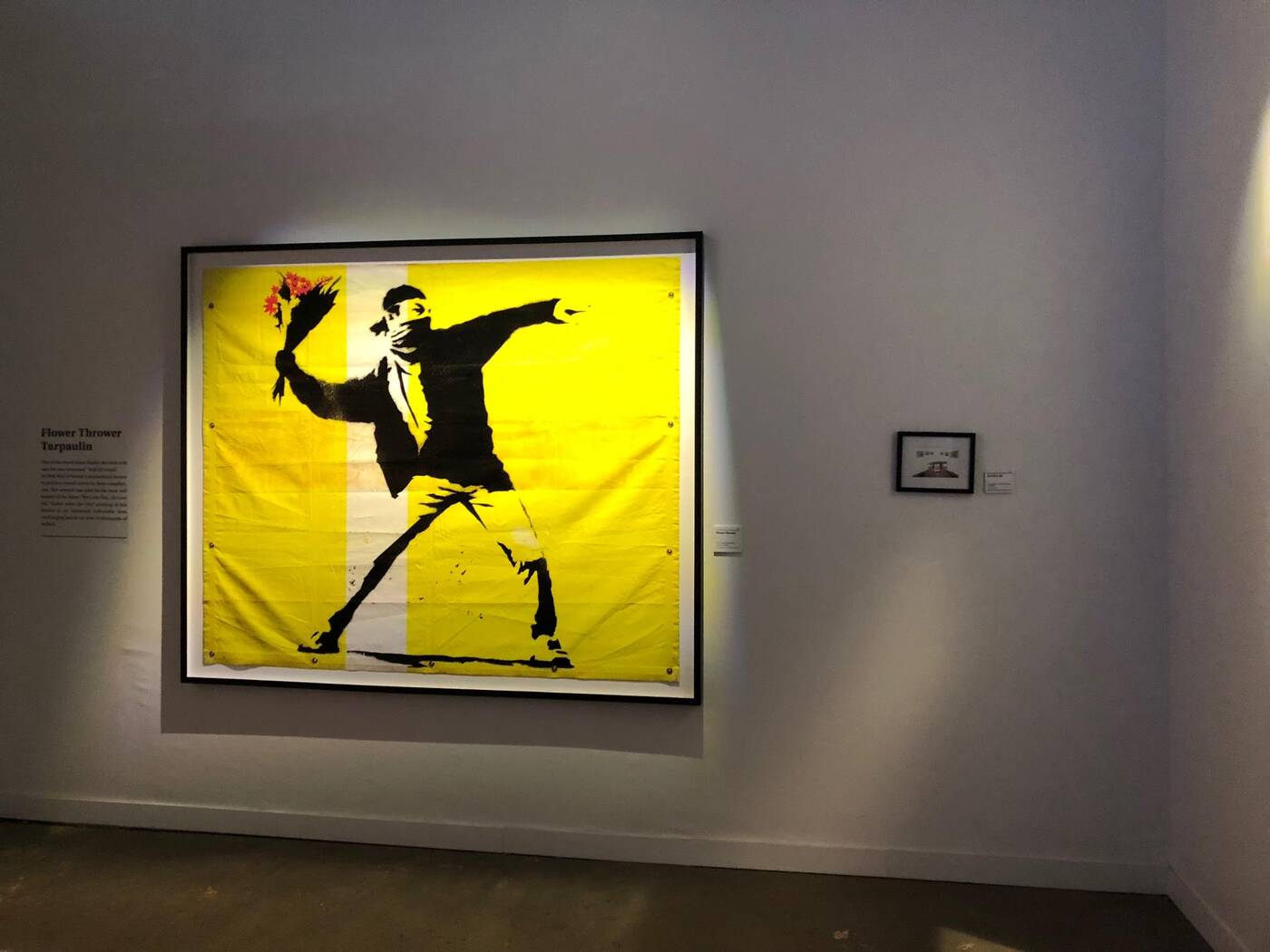 Small as it may be, the 'pranksy' piece didn't go for very long before security guards noticed and took it down. Image via Ramanayake.

Banksy, known for his scathing critiques of capitalism and consumer culture, would likely approve — as would those in the city who've said they find the entire Art of Banksy shebang ridiculous or "vulgar".

Building security, not so much.

"After putting it up I waited and watched as people enjoyed it, they laughed and took pictures," he continued. "But it didn't stay up for long. Someone told security and they took it down quick." 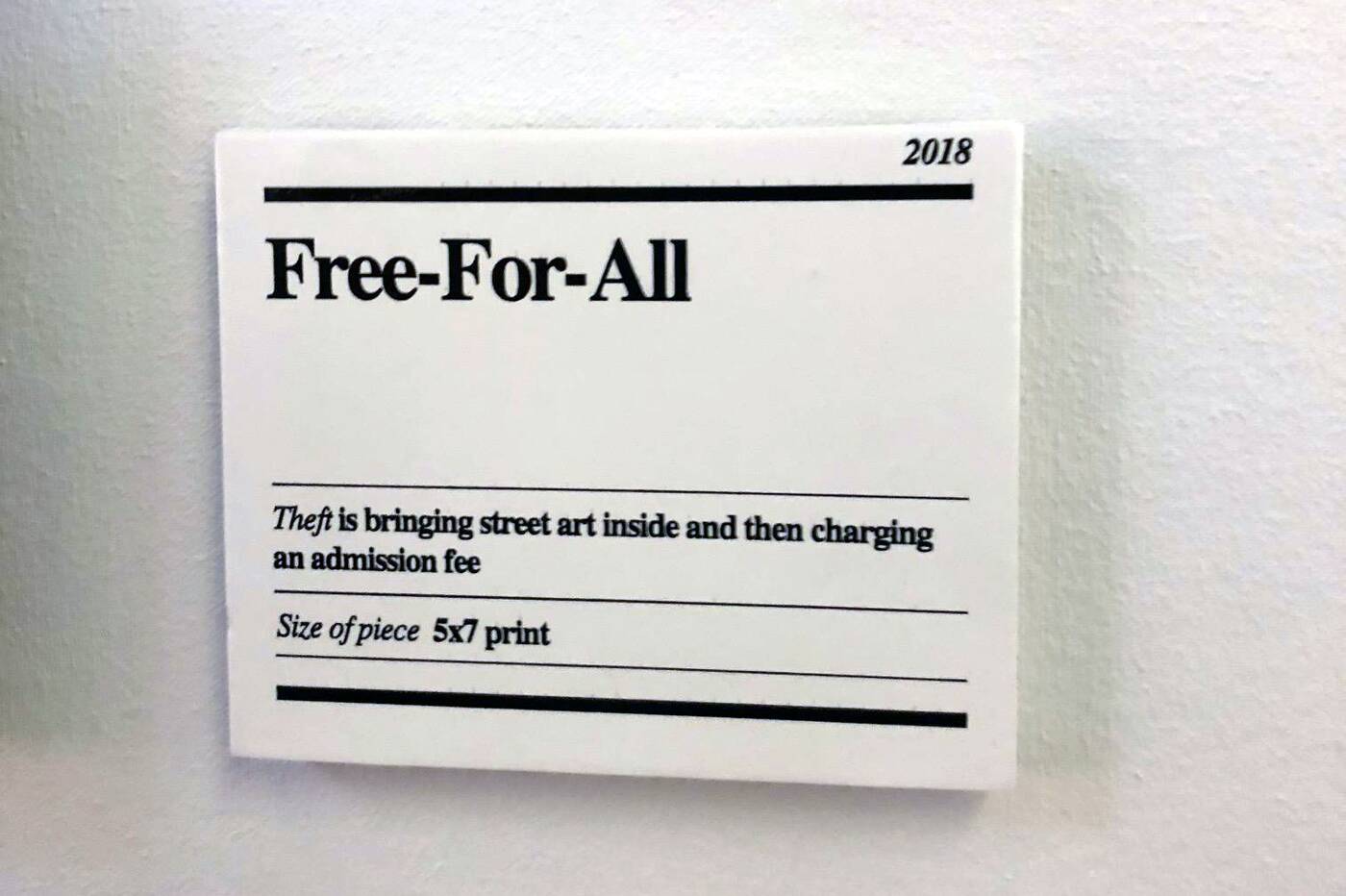 The artist hung an anonymous sign next to his work explaining what it meant. Image via Tharanga Ramanayake.

A PR representative for The Art of Bansky confirmed that the stunt took place this week.

"Yesterday a patron at the Art of Banksy tried to hang a piece of his own art in our exhibit," said Danielle Iversen.

"This was clearly an homage to Banksy... With over 70,000 tickets sold we know our event is driving Banksy fever in Toronto and this patron has clearly caught it!"

"Of note, the patron's art appeared to be critical of charging a fee to see art which he thought was taken from the street," she continued.

"The Art of Banksy in fact does not exhibit street art or pieces removed from public areas. Our exhibit consists entirely of art that Banksy designed for exhibits, and which he himself has sold to private collectors to fund the work he does in the public domain."

Ramanayake, for his part, tracked down the Instagram account of a woman who posted online about telling the gallery staff.

"Crazy story," says the woman in a multi-part Instagram Stories video. "My friend Chris saw this guy pull out a picture from his bag and then stick it on the wall and then put a tag beside it, to make it look like a Banksy original."

She goes on to describe how she flagged down security guards and how Ramanayake bolted when people began gathering around.

"Everyone who worked there thought it was so funny," she said. "He didn't get in trouble at all."