My father and one of his brothers arrived in Toronto as young immigrants in 1921. Born in a small village in Newfoundland, which was not yet a province of Canada, there were many wonderful sights that amazed them in their adopted city. One of the most impressive was the city’s baseball stadium at Hanlan's Point.

The Toronto team had relocated to the new stadium on the Islands in 1897, so when my father and uncle arrived in the city, crossing the harbour to attend baseball games was a well-established and much-loved tradition.

The Toronto Maple Leaf team was in the International League, a minor league that included Buffalo.

Each year at Hanlan's, the first ball flew across home plate in May. Admission was 50 cents, which included the return ferry fare across the bay.

The stadium at Hanlan's burnt twice, in 1903 and again in 1909. When it reopened in 1910, the wooden stadium was replaced by a concrete structure containing 18,000 seats, and was named Maple Leaf Stadium.

The legendary Babe Ruth hit the first home run of his professional career in the stadium on September 5, 1914, the ball landing in Toronto Harbour. My father was aware of the history of the stadium and its importance to Toronto’s multitudinous baseball fans. 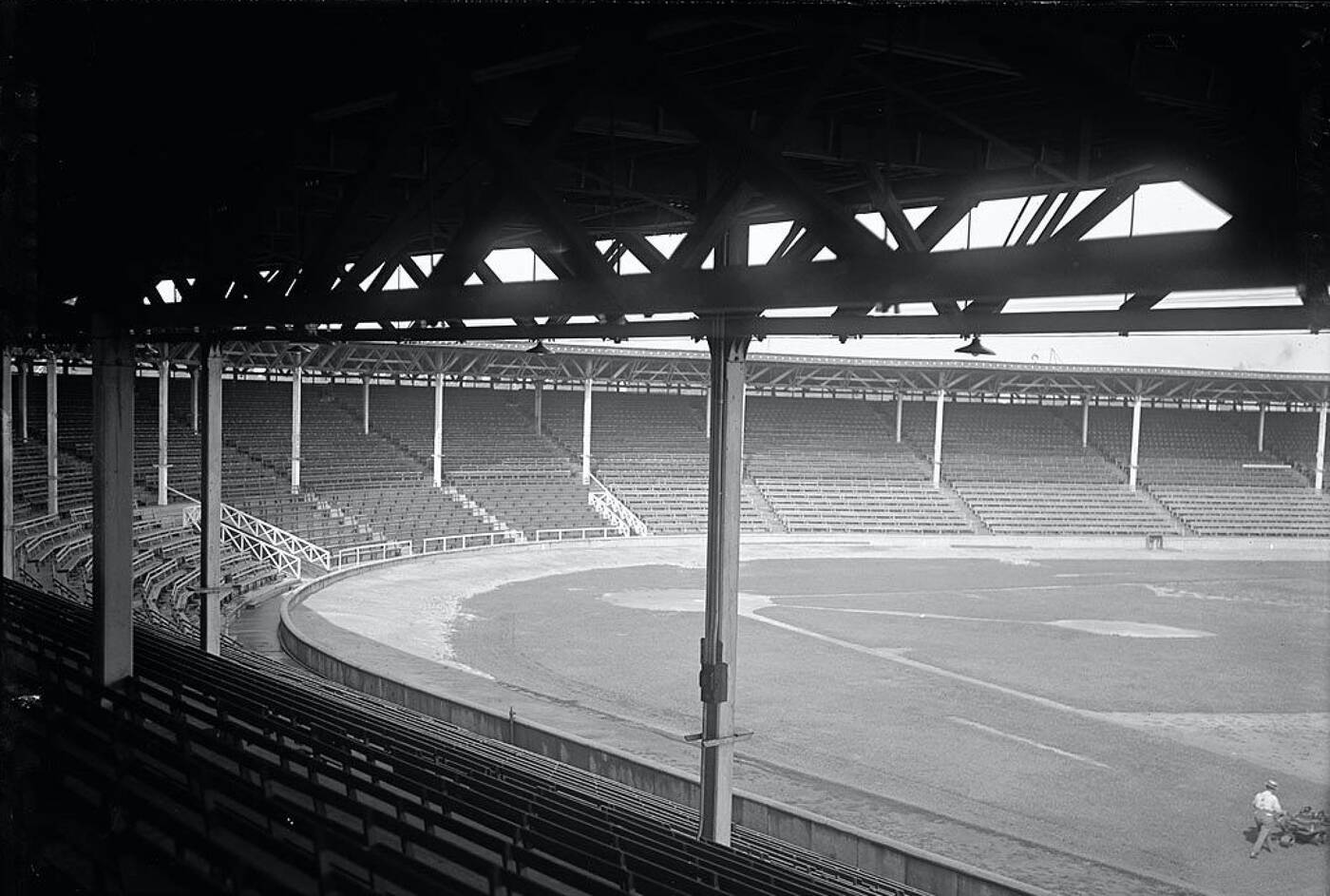 The Grand Stand at Hanlan's Point, 1928. Photo via the Toronto Archives.

From the stories my father told me, and the reports in the Star newspaper in the Toronto Reference Library, I have been able to recreate a reasonably accurate account of his first visit to the Hanlan's Point Stadium, an event that he remembered until the day he passed away.

I knew the year it occurred, as it was his first year in Toronto—1921—and he also told me that it was on Labour Day.

In 1921, the weather over September’s Labour Day weekend was hot. On Sunday, the temperatures dipped to 83°F, but they rose again on Monday, September 5th—Labour Day.

In this decade, on statutory holidays, newspapers were printed, but the laws forced merchants and offices to close. Thus, my father and his brother had the day off from their labours at the McNamara’s market gardens at Bathurst Street and Davenport Road.

They were tempted to visit the Ex, as the Labour Unions were to march to the grounds in the morning, and there was to be a giant sports program in the afternoon.

However, they decided to opt for a baseball game. It was an activity that was to become a lifelong passion for them both. The Toronto Maple Leafs baseball team had recently returned from a stretch on the road and was set to play a double-header against the Buffalo Bisons at the stadium on Hanlan’s Point. 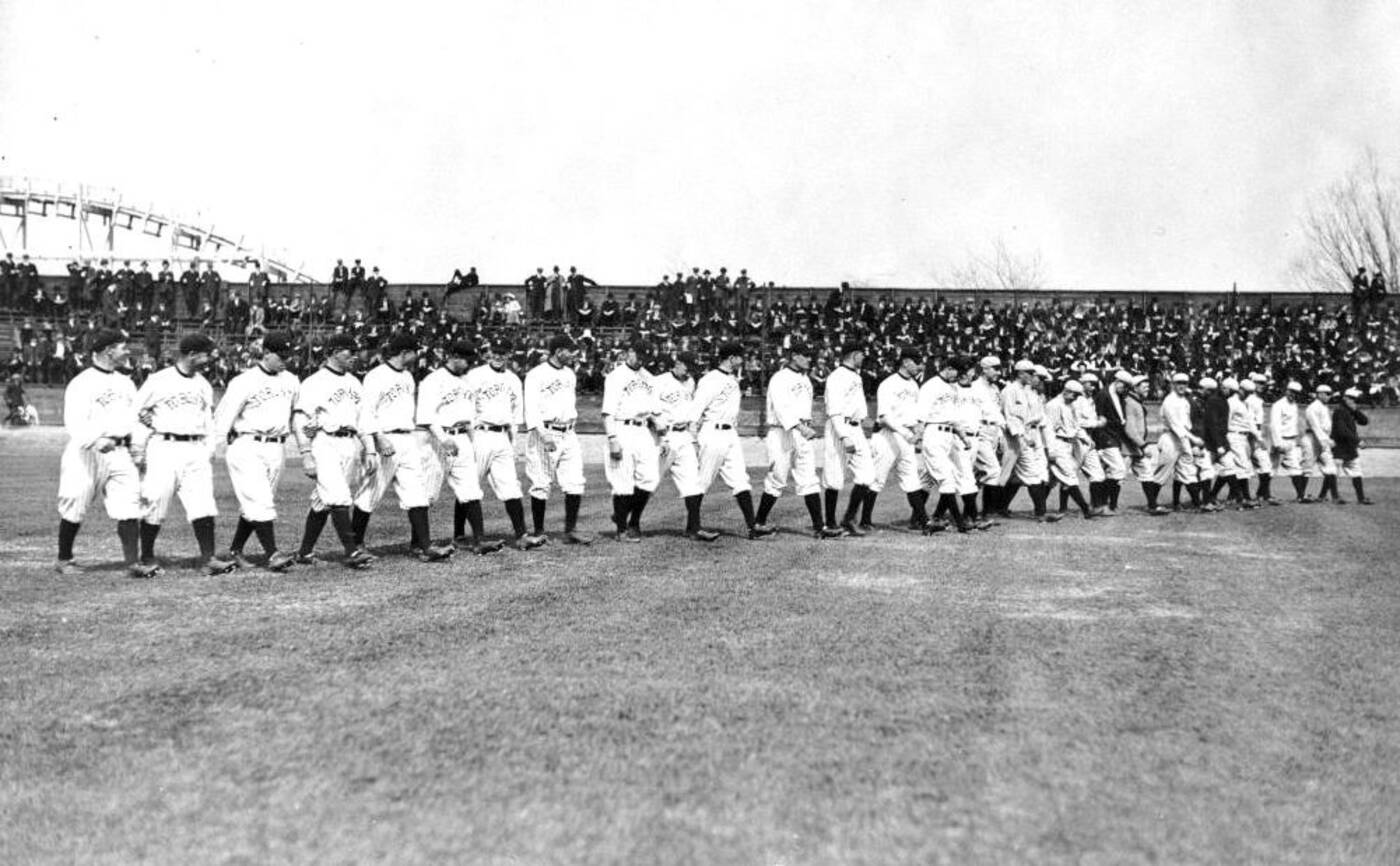 The Toronto team in the stadium in 1910, the rollercoaster of the amusement park in the background. Toronto Archives, F1244, Item 6046.

Shortly after one o’clock, my father and his brother crossed the harbour on the Primrose, a single-stack, coal-powered ferry with side paddles. A few clouds eased the extreme heat of the afternoon, and the refreshing breezes off the lake further moderated the temperatures.

The harbour waters reminded the brothers of their home in Newfoundland, but the skyline visible in the ferry’s wake reinforced the fact that they had indeed opted for a new life.

The city’s other ferries—the Trillium, the Bluebell, and the Mayflower—were also in service, because large crowds were anticipated for the games as Toronto was battling for second place in the International League.

Since the game did not commence until 2 p.m., my father and his brother mingled with the throngs at Hanlan’s Point Amusement Park. They milled about the mechanical rides, especially the rollercoaster.

A ride called the Hurgle Gurgle featured a long, spiralling water-chute with a pool of water at the bottom, where the riders were soaked to the skin. In later years, the water feature was removed from the ride.

Though many people were jamming the food stands and the cafeteria beneath the baseball stadium, the young brothers did not purchase anything, as they wished to save their money for snacks during the game.

After entering the stadium, they did not have long to wait, as at two o’clock the first ball rocketed over home plate. The loud crack of the bat resounded throughout the stands as the ball soared out into left field.

The spectators roared their approval—Toronto was beginning the afternoon in good form. The stadium’s sightlines were excellent, even in the lower-priced seats, where my father sat with his brother. They had an unobstructed view that allowed them to follow the game closely and scrutinize every manoeuvre. 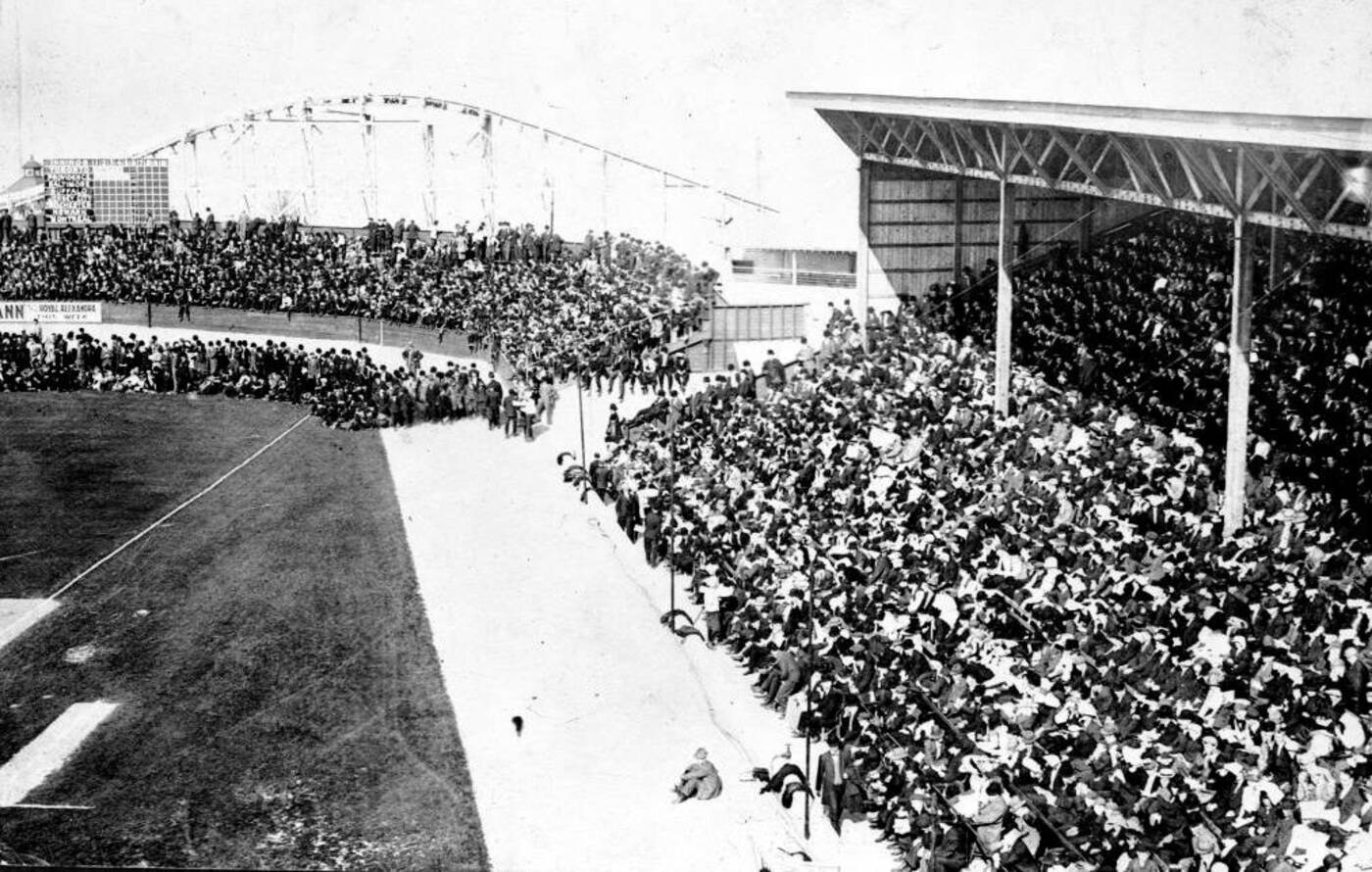 During their boyhood days in Newfoundland, neither of them had played sports in an organized league. However, they had often formed teams to play ball on the meadow near Man-O-War Hill, or, in winter, hit a ball across the frozen expanse of the harbour.

A freeze-up provided a large, flat surface of ice, on which they could enjoy sports for as long as they were able to endure the frigid temperatures.

The experience at Hanlan’s Point was vastly different. The unified shouts of thousands of excited fans, all sharing the same sport and encouraging the same team, caused a surge of adrenaline that the brothers had never experienced.

They fell in love with the antics expected of serious fans—yelling, hollering, and screaming at the players. They ate hot dogs while slurping watered-down drinks, and shouted at the players who did not perform well.

The umpires became prime targets for abuse when the calls were not in the home team’s favour. It was difficult to know whether the ritualistic reactions of the crowd or the skills of the game were the most entertaining.

Despite boisterous encouragement, the Leafs lost the game by one run, and, to add insult to injury, they dumped the evening game at 10 p.m. as well. The vibrant encouragement of the fans was unable to overcome a lack of luck and talent.

My father’s account of attending a game at Hanlan's point sounds very much like attending a baseball games at the Rogers Centre. Some aspects of spectator sports never change.

My father was saddened when attendance at games at Hanlan's point eventually dropped due to the inconvenience of travelling across the harbour, especially on stormy days during early autumn and spring.

The Toronto team departed for the mainland after the 1925 season to a new stadium on the lakefront at the foot of Bathurst Street. It was also named Maple Leaf Stadium.

However, the Hanlan’s Point Amusement Park continued to operate, though attendance began diminishing after Sunnyside opened in 1922.

The stadium at Hanlan’s Point was finally demolished in 1937.

Doug Taylor was a teacher, historian, author and artist who wrote extensively about Toronto history on tayloronhistory.com. This article first appeared on his site on May 31, 2016 and has been republished here with the permission of his estate. The article has been modified slightly.