TFC season four is a go!

With a strike deadline that was set to take effect today, MLS players and the league managed to reach a five-year deal over the weekend, meaning that Toronto FC's fourth season is just around the corner.

The long off-season has been a series of ups and downs, starting with last season's lowest point (losing five-nil to New York to end our chances at a playoff), but also some brightness when the City voted unanimously to install a new real grass playing surface at BMO field.

Another change to look forward to at the stadium is the addition of a true north end. The beer garden has given way to more seating, priced similarly to the other "red" seating (i.e. too expensive!). For those of you on the season ticket waiting list, the bad news is that these will not be available as part of any season-long packages, but having a north end to fill out the stadium is going to improve the atmosphere tremendously. This might be all well and good, but what I'm really looking forward to is the suped-up chip truck that Smoke's Poutinerie will have in the parking lot.

In the off-season, we welcomed new head coach Predrag (Preki) Radosavljevic from Chivas USA. His MLS experience is something this team has dreadfully needed, and there is a lot riding on how he'll be able to pull this team together - namely (Director of Soccer) Mo Johnston's head. 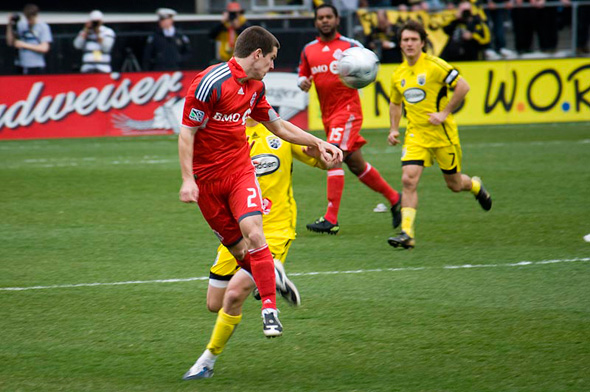 We're in year four of Mo's supposed "five year plan," and we haven't made the playoffs once. Also worrisome is that solid players like Carl Robinson, Amado Guevara and veteran defender Adrian Serioux were unceremoniously dumped from the roster, possibly to create space under the salary cap. This means TFC will start season four without a full squad -- something that has supporters squirming in their seats.

In the past few weeks the club has been playing in a pre-season tournament called the Carolina Challenge Cup. In the past eight years, seven of the teams that have won this particular tournament has gone on to win either the league or the cup. TFC is 0-2-1 with a rumored dust-up between De Rosario, De Guzman, Preki and Mo Johnston following one of the games.

It's not looking particularly good for our boys in red right now. There seem to be some chemistry problems, some obvious holes in the roster (what's going on with our center back?), a new hard-nosed coach with a different system. Supporters don't really know what to expect at this point, but the news that a new collective bargaining agreement was signed over the weekend has reignited the passion and plans for a huge road trip to New England in a few weeks.

Lead photo by Somewhere in Toronto, second from sjgardiner, both members of the blogTO Flickr pool